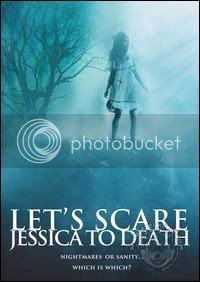 Title: Lets Scare Jessica to Death (1971)
Director: John D Hancock
Cast: Zohra Lampert, Barton Heyman, Kevin O Connor, Gretchen Corbett, Alan Manson, Mariclare Costello
Lets Scare Jessica to Death is that type of old school horror movie that they don’t make anymore. Well, actually they do, but not that often. It’s a horror movie that came out of the seventies and as many horror connoisseurs know, the seventies was a ripe old time for horror movies. Some of the best horror films came out of that decade, The Shinning, The Exorcist, The Changeling, The Amytiville Horror, The Omen, Dawn of the Dead, The Texas Chainsaw Massacre…the list of great horror films made in the 70s goes on and on. Lets Scare Jessica to Death was one of those. Though it is more of an obscure horror film from the 70’s then the others I mentioned, its still worthy of being mentioned amongst those horror gems from that decade. What makes it so damn good? 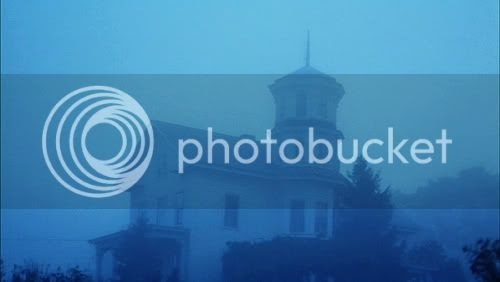 Lets Scare Jessica to Death is the story of a young woman who has just been released from the insane asylum. She’s been suffering from outbursts of schizophrenia, seeing things and people that are not there. You know, basically she’s a little bit coo coo in the head. But she’s been given the ok by her doctors to try and rejoin society and try and live a normal life again. That’s where a trip to the country to live in a home she’s just inherited comes in. Her husband and some friends are on their way to their new home in the sticks. Ready for some fun, ready to kick back and relax. To help Jessica get her life back on track. But something goes wrong. Jessica starts seeing things again. Are the things she’s seeing a product of her deceased mind or is something supernatural really going on? Are we to believe that Jessica is really seeing ghosts? Can we trust her? 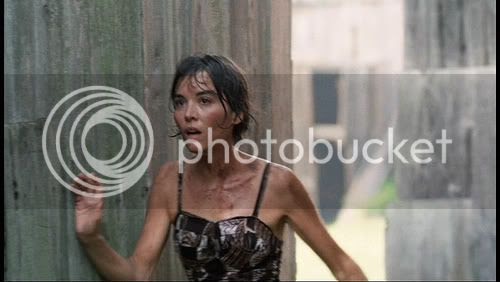 Well, gotta tell you guys I was really pleased with this old school horror film. Id heard it was one of the good ones, and they were right. It’s a superbly crafted horror movie. It does have its glitches here and there, but for the most part it’s very effective. What’s wrong with it you may ask? Well, thing is that the film suffers from the same thing that films like The Wicker Man suffers from. Now I don’t have anything against hippies, but this movie gets extremely hippy, and it kind of messes up the horror vibe. You know how in The Wicker Man suddenly out of nowhere somebody whips out a guitar and a banjo and starts singing a tune? Well, same thing happens here. Jessica meets this hippy girl named Emily who is the biggest hippy in the universe, so in one particular scene Emily magically whips out her guitar and starts singing. And then another character magically finds a bass in the basement and whips it out and together they start playing some hippy song. In the Wicker Man, the hippy folklore music adds to the creepiness, but on this one, it felt out of place. But I guess it aint a big deal. For me it kind of disrupted the whole horror vibe of the movie. 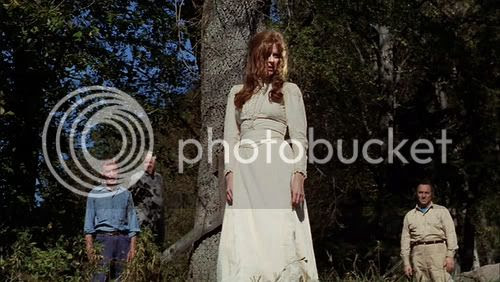 The characters on this film go to live in the sticks to help Jessica, but also to get away from the craziness of city life and society. They basically want to go and live a secluded life in their own little paradise. Lets face it, back in the 70s the world was in a very crazy place. We're kind of reverting to that now if you ask me, but lets see: that son of a bitch Nixon was president of the United States, Vietnam was still going on. John Lennon was singing his “Give Peace a Chance” people were rioting/marching on the streets against war. So the characters on this movie wanted to get away from all that. Can’t say I blame them, the world can get a bit crazy at times, sometimes all one would love to do is get away from it all. And thats the type of mentality that the characters on this film have. The film works like a time capsule; transporting us to the rebellious and hippy filled seventies. The film was shot in the 70s. Early seventies. Shaggy haircuts, bell bottoms and hippy guitar tunes were the norm in those days. So some of you can take that as a negative aspect of this movie, or you can just sit back and get taken back to another time and another way of seeing things. Art imitates life and all that. That’s what people were living in during those days, that’s what their movies will reflect. Our movies reflect us now. Just take a look and you’ll see. But back to Lets Scare Jessica to Death. This film is atmospheric as hell. Right from the get go, when the films first frames begin inside of a spooky fog filled cemetery, the movie got me on its good side. Then when they finally get to the house, well, it’s a really creepy looking house, filled with fog and dim daylight. This is one of those movies in which even the daylight seems creepy. 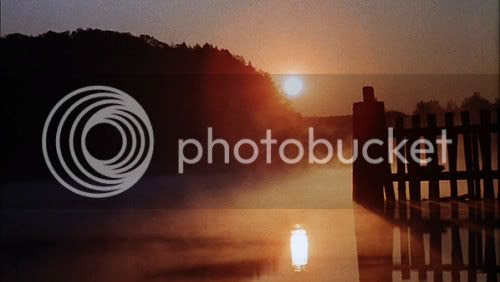 What I enjoyed the most about this movie is how you never really know what the hell is going on until the very end. The movie creeps you out all the way, it has some genuinely good scares in there and it really does keep you guessing. It’s not predictable at all. Once the movie ends, you see just how unique this movie is. Its one of those movies with a great finale. One of its greatest assets was Zohra Lampert’s performance as Jessica. She seems to be going truly crazy in some scenes, very neurotic, very paranoid. She sold me on her craziness. That whole issue that exists in the film about her visions. Is she really seeing them? Or is she going really crazy this time? On this film, Jessica is the epitome of an unreliable leading character. I found it fascinating because they really milk this premise for all its worth. She’s the main character, but can we as the audience trust her as we are used to do with the main character in a film? In this way, the film is similar to films like Rosemary’s Baby where a female who’s sanity is in question plays the leading role. 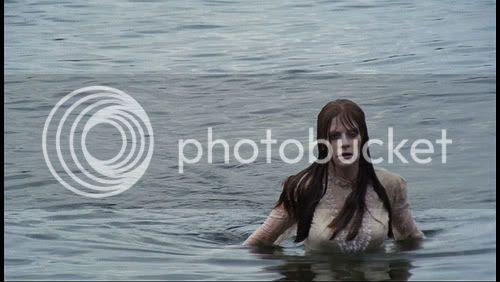 A word of warning though. This is an old school, slow burner of a horror film. By that I mean that it doesn’t rely on action or gore to scare you. Its just one of those movies that aims to creep you out psychologically through atmosphere and a good creepy story. And it really achieves it in my book. I compare this movie in terms of scares and mood to films like The Others and The Changeling. Slow Burners, but damn good ones. Once the story completely unravels before your eyes you’ll feel you’ve just watched a great horror film. And it is. In my opinion this movie is another fine addition to “great horror films from the 70’s” category.
Rating: 4 out of 5 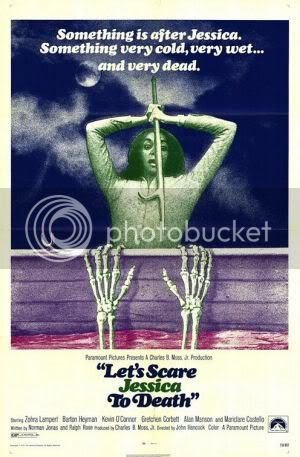 I still dont know what is going on even at the very end, but THANK YOU for this review!! I absolutely love LETS SCARE JESSICA TO DEATH, and so many people have berated it and talked down on it. It is one of my favorite finds in the last several years, and is beautifully dark and atmospheric. I generally hate vampire films, but this one was easily as good as LET THE RIGHT ONE IN in my opinion!

This film is a bit different then most horror films, maybe thats why some people just dont get it.

Maybe thats why it wasnt such a big hit upon its initial release. But its gone on to become quite popular on video.

I agree with ya, its the atmosphere on this film that gets me, and those last 30 minutes or so are gripping!

I saw that movie with you and the others...Funny, i dont remember nothing about the movie except the singing part and the last scene.

Her husband sold everything to buy the house, it wasn't inherited, and it was his bass that they brought in the big coffin looking case the back of the hearse...