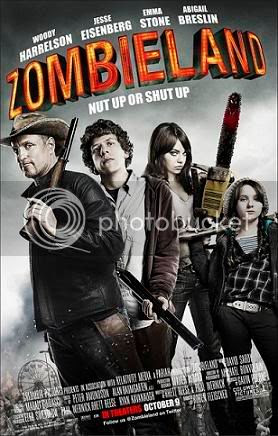 So anyone out there who personally knows me, knows how much of a zombie head I am. Im actually working on my second zombie/comedy film called Cannabis Cannibal Exodus! So naturally when I heard about this new zombie movie that was in the works and that it took place inside of an amusement park, I was instantly pulled towards it. A tractor beam pulled me towards the theater, I was powerless. Did Zombieland blow me away and become a memorable zombie flick, demonstrating that the zombie film is far from dead? The answer to that question is a very resounding yes! Zombieland was a welcome addition to the zombie genre! 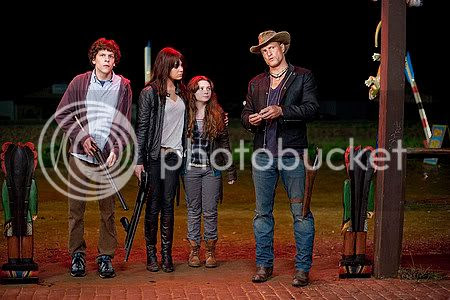 Story goes something like this: zombies have overtaken the world. Humans are almost extinct. Theres only a few humans scattered around the world, this zombie filled world where humanity has almost entirely dissapeared is all we get. Which is great cause it gives the film that extra feeling of dread. That extra edge. Four strangers band together to try and survive in this cruel post apocalyptic world.

Let me put it in simple words, this movie was awesome! It rocked the house! It proves zombie films are NOT dead, but alive and kicking and thirsting for more human blood! So where do I begin? First off, who the fuck is this Ruben Fleischer guy? The director of this zombie opus? I was incredibly impressed with the direction on this film. Its Fleischers directorial debut, but wow, what a way to start! From the opening sequence alone you get the feeling that this movie is going to be something special. Its all in slow motion, with zombies going after their victims. It was extremely entertaining. It shows the ferociousness of the zombies in this film. What I loved the most was the special moments in that opening montage, for example, the blood splattering on the screen in slow motion, naked zombie strippers with their tits bouncing on screen in slow motion as the run for some poor helpless dude, and best of all? Its all done to the beat of Metallica's For Whom the Bell Tolls! Its your basic opening sequence which establishes that the world has been overrun by zombies. It's a bit obvious that it was more then a little bit influenced by Zack Snyders Dawn of the Dead (2004) but who the hell cares, it was fun as hell! Loved the opening sequence! 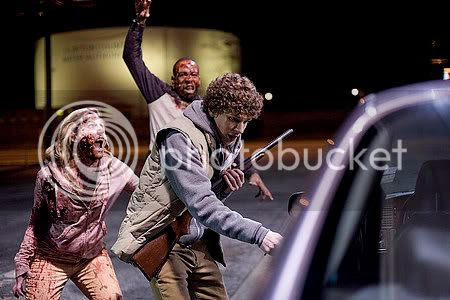 We also get great characters to follow around. Since usually there are not many human beings in a post apocalyptic zombie movie, it always helps if your main characters are fleshed out and likable. This movie achieved this to perfection. Woody Harrelson was such a bonus on this movie! He is the quintesential kick ass dude. You know, kind of like Ash from the Evil Dead movies or Snake Plissken in Carpenters Escape from New York. The dude you dont wanna mess with. He goes by the name of Tallahassee. He has all the necessary things to make him a kick ass dude: snake skin jacket, guns, cool hat, attitude and bankable catch phrase. In this case, the catch phrase is "Nut up or Shut Up!" which he repeats quite a few times through out the film. Aside from that we get Jesse Eisenberg playing the straight guy to Harrelson's Tallahasse. He plays your basic nerdy, anti-social, video game playing guy who hasnt got a clue how to deal with girls. He has these rules he is living by which have allowed him to survive the zombie holocaust. The rules appear on screen every time he puts them to use which was a funny touch. The hot babe in the film is Emma Stone whom some of you might remember from Superbad or The Rocker. I liked her character because she goes against the usual helpless damsel in distress. Actually, in this movie you might start up hating her character cause she's so weary of giving others her trust, she hides behind this mean persona. Then theres Abigail Breslin, yeah, Little Miss Sunshine herself killing zombies left and right. In todays self righteous world, some might find it wrong or offensive to show a 12 year old shooting guns, but fuck it, its the end of the world, its the apocalypse, I say give the girl her gun! So, we have an excellent cast to back up this zombie epic. 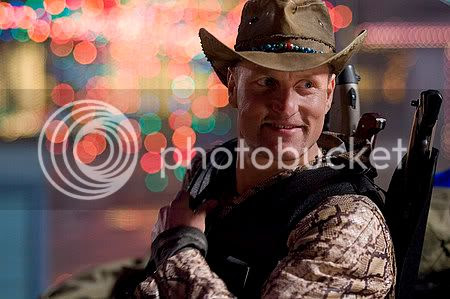 What about the zombies and the gore? Well, the zombies portrayed in Zombieland are very 28 Days Later/Dawn of the Dead ('04) like. They are the viscious, fast paced, jerky, running type of zombies, which makes them all the scarier, all the more menacing. The make up effects was excellent top of the line stuff. The gore was fantastic as well. I loved the fact that this film didnt pussy out in the gore department. Thank the movie gods that this film is rated R cause we get gore and we get lots of it. We get violence, and its viscious violence! One scene has Tallahassee kicking the shit out of a fat zombie with a bat! To my amazement, they didnt cut not once, you actually see the bat repeatedly hitting the zombie on the head and the blood splattering about...freaking cool! I was like, damn, this movie has some balls! So gore fans should be plenty pleased. 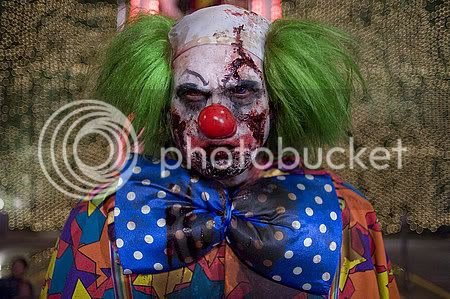 This movie does what all good zombie movies do: make the film about the humans. This movie has zombies, and action and gore, but at its core its about four humans looking for warmth and family in the middle of all the craziness. Same reason why I loved 28 Days Later so much. My favorite moments in 28 Days Later are those in which the four survivors are just hanging out, laughing, falling in love, giving each other love in the middle of the madness, which is what happens in this film at certain point when they decide to hide inside of a Beverly Hills Mansion. Which reminds me, this movie holds a very special surprise in store. A friend of mine told me "wait till you see who shows up in the film!" and I was like "Bruce Campbell?" and he said "better!" and I was like "better then Bruce Campbell? Robert Deniro?" turns out my friend was right, the surprise in this film was awesome. A great choice. Not gonna spoil it. Just watch it for yourself. 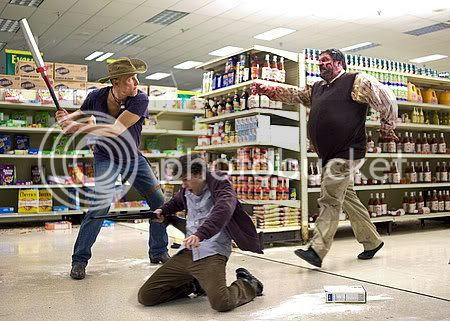 One thing I thought was strange about the film was that it waits to get to the amusement park all the way down on its third half. I was thinking most of the film was going to take place inside of the amusement park and that this was going to be Dawn of the Dead but instead the humans hiding inside of a mall, they were going to hide inside of an Amusement Park. Turns out I was wrong. They only arrive at the amusement park during the films last act, which was fine with me since I was having so much fun with the rest of the film. I didnt really care, I was having so much fun out of the amusement park. Though I will say this: once they finally reach the amusement park, theres lots of cool amusement park gags in store! Including one demonic looking zombie clown which rocked the house! So all in all, Zombieland was a very satasfying zombie flick. It was a great comedy, it was an over all great film. I really cant think of anything bad to say about. So take that for what its worth! If you want to see one good horror comedy this halloween, make it Zombieland, its a rocking good time.

Okay, you guys can comment on this excellent flick now..for some reason, the settings were on "do not allow comments" I dont know why..sorry about that!

alright!asyou know, imnot a zombie movie freak! but i totally enjoyed this one...it was fresh, original, super funny and fun!! kudosss for the movie! and kudos for you, i really liked this review!!!:)

Your comment proves this film can be enjoyed even by people who dont normally enjoy zombie/horror films.