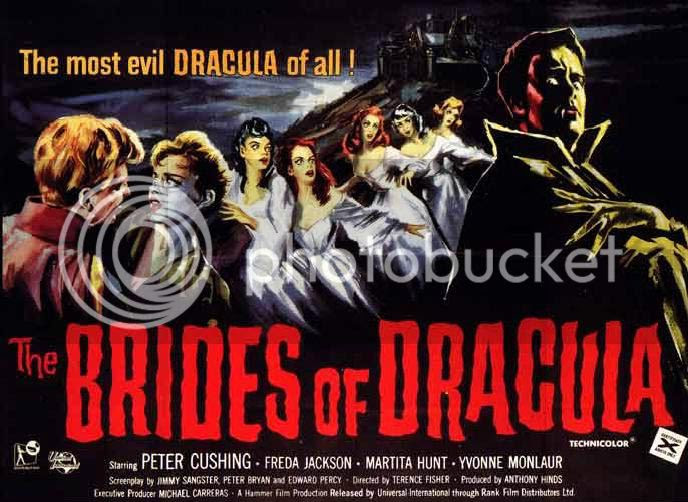 When Horror of Dracula first came out and was such a huge success for Hammer Studios, they immediately started working on a sequel for it. Christopher Lee was not asked to return for this sequel because the studio didnt want to pay him more money. Im guessing Lee was also running away from being type casted as the guy who plays Dracula, so he didnt come back for this sequel. And so, Brides of Dracula was filmed without him. Dont be fooled by the title though, Dracula is nowhere to be seen on this flick. In fact the movie starts out with a spooky voice over letting us now that "the Monarch of all vampires is dead, but his disciples continue on..". So no Christopher Lee here, though Lee did return to the role of Dracula in the film that goes after this one, Scars of Dracula. But on this one? No Count Dracula. Instead we get David Peel as Count Meinster (one of Draculas disciples) to take his place. 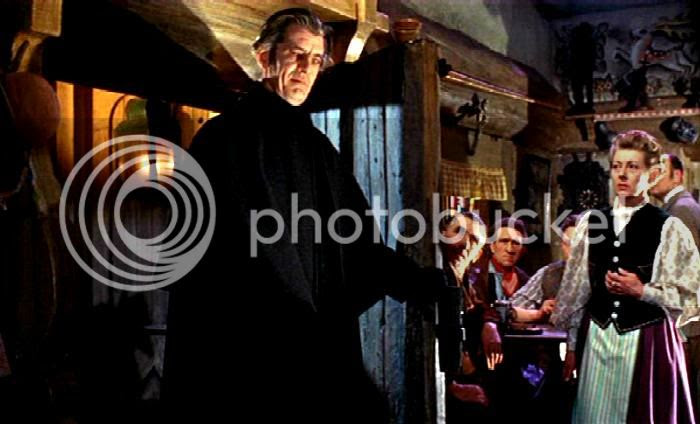 The story is about this young girl named Marianne who is on her way to a boarding school to become a teacher. Of course she gets sidetracked and ends up in this giant spooky castle in the middle of Transylvania. A Baroness Meinster lives there and welcomes her...but not before warning Marianne not to walk into a certain part of the castle. Of course Marianne does venture into the prohibited part of the castle where she discovers that the Baroness has her son tied up in chains because he suffers a certain "illness". Marianne thinking this to be cruel, releases the Baroness's son without realizing that she has just releasaed a very powerful vampire into the world! 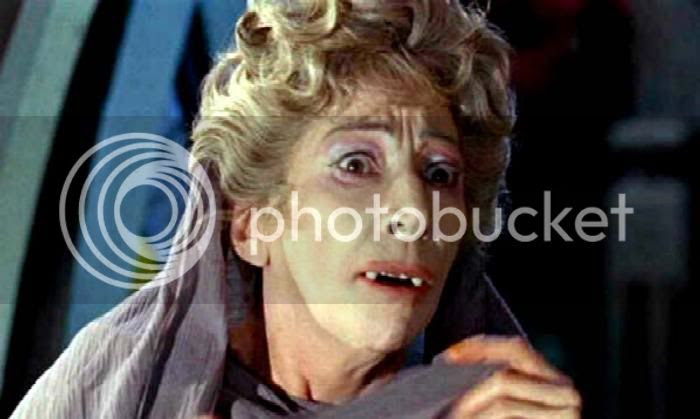 Even though Christopher Lee doesnt show up as Dracula (and he is very missed) we do get Peter Cushing reprising one of his most famous roles as Dr. Van Helsing wich at least gives the proceedings an air of familiarity and continuity. David Peel as Count Meinster is good, but goofy looking if you ask me. Too much of a pretty boy to play a scary villain, he just looks too freaking clean cut! Not as scary or dramatic as having Lee don the fangs and cape. Another very memorable performance here comes from Freda Jackson as Greta. She plays a servant in Count Meinster's castle. She gives us one of the most memorable moments on the film when she is waiting on top of a grave for one of Count Meinsters brides to wake up. 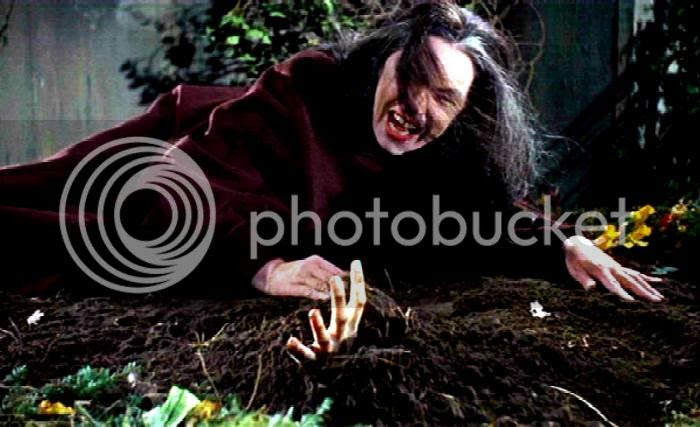 The films lush look and great direction can be credited to Terrence Fisher, one of Hammer Studios greatest directors. Fisher is responsible for some of the best that Hammer had to offer like for example Curse of Frankenstein, Horror of Dracula, The Mummy and Curse of the Werewolf. From a visual standpoing the film is filled with great atmosphere and eerie shots. In my opinion, Brides of Dracula is the most lush looking film in Hammers repertoir. Kudos to Fisher who has not dissapointed me yet. 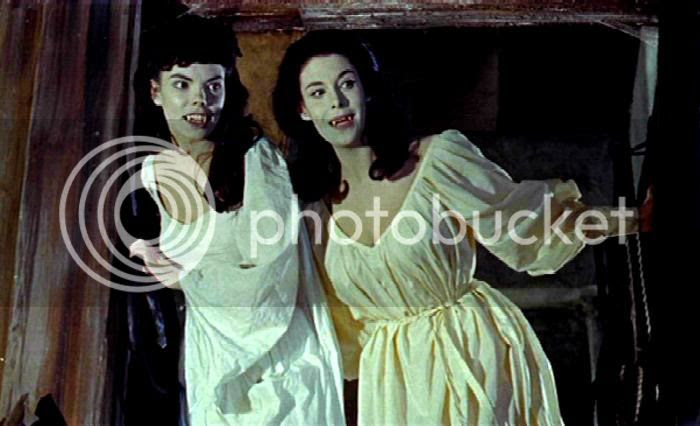 The titular brides. Only they aint Draculas Brides! There Count Meinster's

There are a few things that didnt make much sense to me in the story like for example: if the vampires can turn into bats as they do in this movie, then why couldnt Count Meinster just turn into a bat and escape the shackles that had been holding him prisoner for so long? If Greta (the housekeeper) cared so passionately about Count Meinster, why had she not released him from his shackles herself? 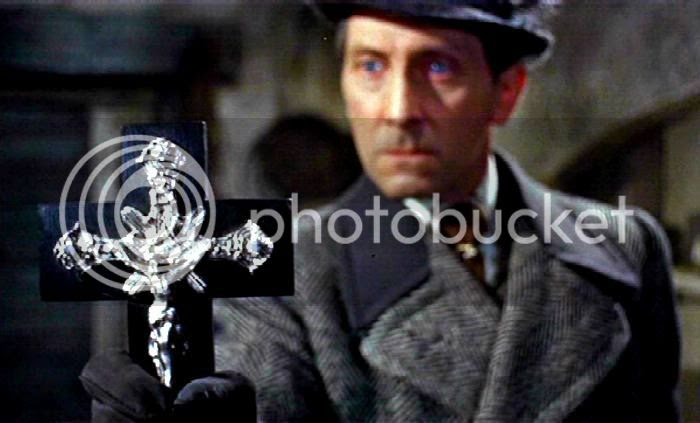 By far the most shocking of all moments in the film is when Van Helsing himself is actually bitten by a vampire. All he does to cure himself is spray some holy water on the bite and burn it and his is free of being a vampire! That didnt make much sense to me, but it is a technique thats been used in other Hammer films before (for example Kiss of the Vampire) so it didnt surprise me. But still, it makes no sense. All these nonsensical sequences just lead me to believe that even though the films visual aspect is great, Brides of Dracula had a weak script that was written in a hurry just to get a sequel out. 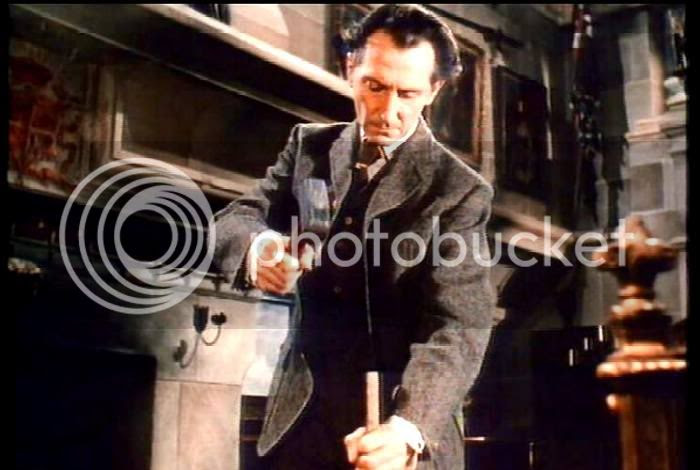 This film was originally going to end with a swarm of Bats killing the evil vampire, but that was discarded because Peter Cushing felt that ending would be too magical for his character to be doing it and that Van Helsing was never about dealing with magic. Van Helsing always used the old stake and hammer to do his vampire killing! Not conjuring up any bats with magical spells. Not only that, but it was going to be too expensive to shoot. The planned ending with the swarm of bats attacking the bloodsuckers to death was finally used three years later in The Kiss of the Vampire. 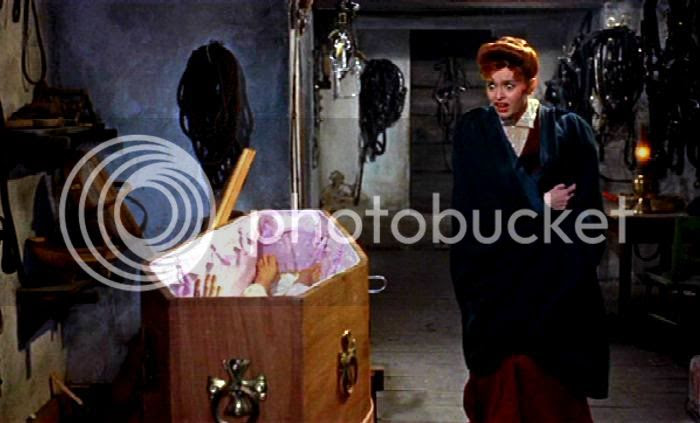 But minor squabbles aside, this was a fine Hammer film. It can be found in the Hammer box set called Hammer Horror Classics. Its a great box sets which includes in it many of the finest Hammer films that had not been released on DVD yet like the awesome Curse of the Werewolf and the underrated Paranoiac! Kiss of the Vampire is in there as well, but in my opinion Brides is the Jewel of the set. And inspite of its misleading title (Dracula is nowhere to be seen and these are not really his brides!) the film manages to be memorable and beautiful to look at. Another fine jewel on Terence Fishers crown. 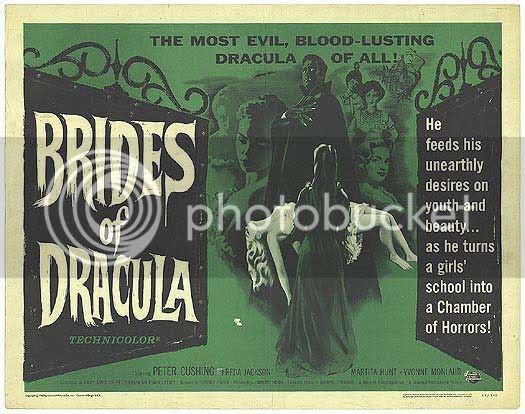 I love this movie, it's one of Hammer's best. I just wish they had picked a better main vampire than goldilocks here. Other than that, it's damn flawless

What the hell, I own this movie?? I thought it was out of print or unreleased, but Im looking at the box on the shelf for my Hammer Horror Collection as I type this. I dont know how I missed this one, I watched Paranoic and a bunch of the other titles. Glad to hear this is a top ranking Hammer film, I will be absolutely sure to check it out asap, most likely during my next DRACULA run =D

Yup Carl, its on the Hammer Horror Classics Boxed Set. Excellent boxed set, it finally released all those Hammer films that Id been waiting to have on my collection, like Curse of the Werewolf and Brides of Dracula.

Come to think of it, both of those movies would make an excellent double feature DVD.

I really want to check out THE DEVIL RIDES OUT, but I know the DVD is in a two pack that is out of print so I am going to wait for the rerelease

The Devil Rides Out is actually pretty good! Its two good guys vs. the Satan Worshippers! And Christopher Lee actually plays the good guy for a change!

What was hilarious (and a little sad) is that Dracula appears on the poster, but not once did he show up in the movie. What gives?

I guess the guy on the poster isnt Dracula its actually Count Meinster looking like Dracula.

Im guess that was done on purpose to make everyone believe Lee was in the film, which of course he wasnt. But Hammer probably didnt want anyone knowing that.