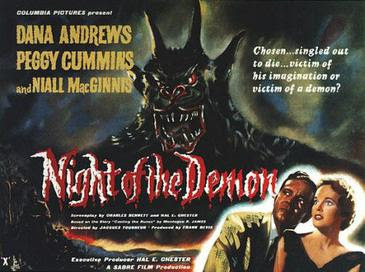 Heard in an interview done to Sam Raimi that he was paying homage to Jacques Tourneur's Night of the Demon when he decided to direct and write Drag Me To Hell. I personally didn’t think so much of  Drag Me to Hell. I mean, I thought it was a fun ride, but very repetitive (in the sense that you see many gags you’ve already seen in previous Raimi films) and it didn’t have enough gravitas (what I really mean to say is, it had no balls! There.) When compared to Raimi’s other horror films (I speak of the Evil Dead trilogy of course) Drag Me to Hell just didn’t measure up. Even Army of Darkness, which was a goofy, cartoony and comic bookish, roller coaster ride of a movie, had more intensity then this new Raimi film. I guess Raimi just isn’t the same old Raimi after having done all these big budget spectacles for Hollywood. I understand that Drag Me to Hell is a PG-13 movie, and yes it’s a commercial film, and it’s a Hollywood production, so I’m guessing this is what hurt the movie and didn’t allow it to have the edge I was expecting. But that’s just me so don’t take it personal, I know must of you horror loving dudes and dudettes out there thought Drag Me To Hell was the greatest thing since sliced undead head. But to each his own. Anyhow, when I heard Raimi was inspired by Night of the Demon, I immediately decided to see what this British film was all about.

The basic premise consists of a devil worshipping cult that’s being investigated. A paranormal psychologist who goes by the name of Dr. John Holden is visiting London to give a lecture on hypnotism. When he gets there, he is informed that his friend and colleague Prof. Henry Harrington has died in a tragic car accident. But there’s something suspicious about the accident. You see, it was supposed to be a car accident, yet his body was horribly maimed as if some wild animal had attacked him. Some people who know about the devil worshipping cult suspect that maybe it was a demon that was conjured up to kill him. What really happened? Dr. John Holden (who by the way is an incorrigible skeptic) is about to get to the bottom of things.

I loved this movie. It has many good things going for it. First of all, it’s got a decent script. It’s actually quite good for the time it was written. Where some of the movies from this era tend to get a bit silly and cheesy (specially the horror and science fiction ones) this one actually had some credible dialog within its fantasy premise. Also, it has loads of atmosphere to it. Lots of wind blowing through the trees, lots of leaves on the streets, lots of stormy skies. I love movies that have that spooky atmosphere all through out, and this one was one of them.

What I liked the most about it though was the villain, Julian Karswel, the leader of the devil worshipping cult. He was awesome! I mean, here is this cool as hell guy, he lives with his mom in a mansion. He is nice to the kids doing magic tricks, throwing a Halloween party for them, he is well mannered and educated, but when you get right down to it, he is the leader of the devil worshippers! He plays it cool, but when he has to his evil side emerges. Great villain, he wasn’t clicheish at all. Love that about this character. Also, I enjoyed the fact that magic and the black arts are very much real! In real life, magic doesn’t exist. Giant fire breathing demons aren’t real. But in this movie demons are real alright. There’s one awesome scene in which Karswel summons a wind storm just to prove his magic is real. Great scene! Also I enjoyed very much how Mr. Karswel had a counterpoint in the form of Dr. John Holden. One character is all for magic and the black arts, the other is skeptical and doesn’t believe anything supernatural is real. So it’s a battle between a religious person vs. the skeptic. The believer vs. the non believer.

Now, when compared to Sam Raimi’s Drag me to Hell, there are lots of similarities. There’s the spooky mansion, just like in Drag me to Hell. There is a clairvoyant, a medium, who contacts the spirits to try and look for a solution to the problem. There’s a big séance sequence, only its nowhere near as flashy as the one we see in Raimi’s film, yet I thought it was still quite effective. And there’s a story device which Raimi swiped right off from this movie which is the thing with the coin. (Mild Spoilers Ahead) If you’ve seen Drag Me to Hell, you know there is this situation where the old Gipsy woman curses Alison Lohan’s button, and whoever has the button is the person who will be tormented by the demon. So at certain point in the movie, its all about who are you going to give this button to so the demon wont come for you. That same situation is played here only with a parchment written in ancient runes. Whoever holds the piece of paper with the runic symbols will get attacked by the demon. So those are the similarities between Raimis film and this one.

And speaking of the demon, we only truly see him twice. At the beginning of the film and at the ending of the film (in similar fashion to Raimi’s movie as well) and I would say that for the time this film was made (1957) the special effects were very well achieved. The demon is of gigantic proportions, and is constantly emanating smoke and brimstone. I liked the way the effect looked, with the demon walking through the woods. Of course, when compared to todays effects, it’s very low key. But for the time it was made it achieved its purpose very well. When we see the demon in close up, it looks cartoonish and kind of like something you’d see in a Godzilla movie. But still cool to watch and very well achieved.

So if you ask me, this movie is very satisfying. It’s got that old school feel to it. Lots of atmosphere and an intriguing story which comes from a well written script. Recommend it to anyone out there interested in seeing where Drag Me to Hell came from, or simply for those of you who enjoy old school black and white horror.

Email ThisBlogThis!Share to TwitterShare to FacebookShare to Pinterest
Labels: Jacques Tourneur, Night of the Demon (1957)

Its been over a year since Ive seen this one, and I only saw it the one time, but thinking back I totally remember each of the similarities you mentioned with the parchment etc, but I completely agree, the subtly of NotD completely makes the movie. I cant remember if I saw the American or International release, but leave it to the Americans to edit in a fiery demon at the end of the film. Thats there version of Sam Raimi's abusive CG.

I defenetly enjoyed this one more then Drag me to Hell thats for sure.