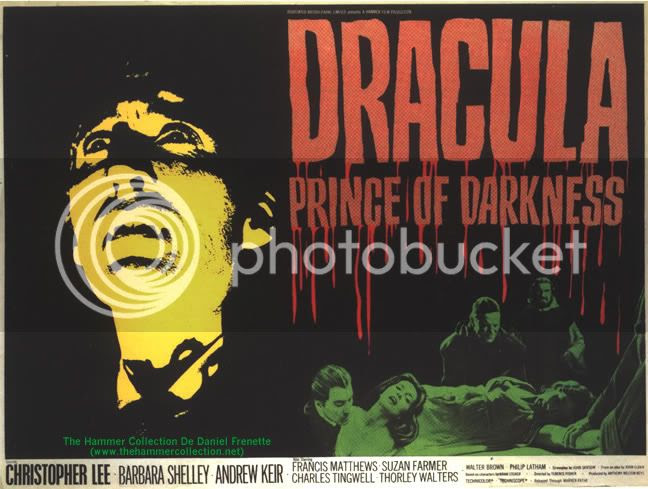 Director: Terence Fisher
Cast: Christopher Lee, Barbara Shelley, Andrew Keir, Francis Mathews and Charles Tingwell.
Review:
Horror of Dracula was the film that kicked off Hammer Films slate of Count Dracula films. Christopher Lee wanted more cash in order to involve himself in a sequel, Hammer didnt want to pay up, so Brides of Dracula was made without him. Thats a fine film on its own right, and you can read my review for Brides of Dracula to see what I thought of it. But, lets face it, it didnt have Christopher Lee playing Dracula! So, I guess Hammer Studios and Lee came to some sort of agreement because he finally returned to play Count Dracula in the film I'll be reviewing today, Dracula: Prince of Darkness the second Dracula Hammer film featuring Christopher Lee as the titular Prince of Darkness. Some consider this film to be the true sequel to Horror of Dracual. So, how was it?

Hammer Studios had a certain formula for making their Dracula flicks. Heres how it went: basically you take a couple who are on a trip to somewhere and suddenly either their their car breaks down, they run out of gas, or the night has caught them and they rather stay in some hotel on their way to where they are going. At some point in the evening, they end up in a nearby pub, to get warm, ask for directions or eat something. While on the pub, the town folk warn them not to go out into those woods at night. And dont even think about going up to that castle at the top of the hill! You'll stay away from it if you know whats good for ya! But the naive couple go anyway, fall under Count Draculas deceptive charms and end up as dinner for the ancient vampire.

Dracula: Prince of Darkness did not deviate from that formula. In fact it played it out to perfection! In this case its two couples who end up going into Dracula's castle even after the towns people warn them not to go. Dracula is resurrected by his servant Klove using the blood of one of the guests as a way to resucitate his master. Carnage and vampire mayhem follow. The storyline in this film isnt very original, wich to me is one of the down sides to this film. Basically you can sum this movie plot like this: Characters end up in Draculas castle, Dracula gets resurrected, Dracula feeds on the guests, more often then not, these guests end up being beautiful english ladies. The story is extremely simple and is certainly nothing new or groundbreaking, but since its so well produced and directed, it ends up being entertaining non the less. 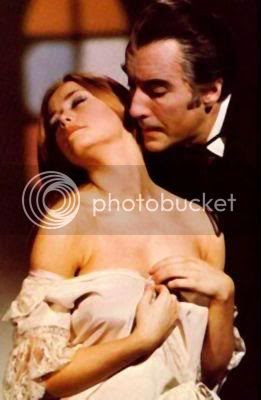 On Prince of Darkness, Terence Fisher (one of Hammers finest directors) makes sure that we get what we expect. A spooky castle at the top of the hill, some heavy atmosphere and some poor helpless victims. Ill underline the fact that Fisher really did a good job in creating the perfectly eerie castle. The wind is hollowing 90% of the film, the shadows and cobwebs are everywhere, so we get an excellent spooky setting for this film. We are presented to Klove, Draculas servant on this film, Draculas personal lap dog, his helper, his ghoul. In fact, Klove is more on the film then Count Dracula himself! I saw him more of a threat then Dracula himself. Which is one of the downsides to this film, Dracula takes so long to finally appear!

The movie pays tribute in a few scenes to Bram Stokers original novel. Theres a scene with a character thats very similar to the "Renfield" character that likes to eat flies and serves "the master" always doing Dracs bidding in an attempt to get everlasting life himself. Also it has a scene in wich Barbara Shelley under Dracs hipnotic stare drinks blood from Draculas chest. I guess TerenceFisher and the writers of the film just wanted to give a little nod here to Bram Stokers original novel. A similar scene can also be found in Francis Ford Coppolas Bram Stokers Dracula, where Wynona Ryder sucks on Draculas bleeding chest. 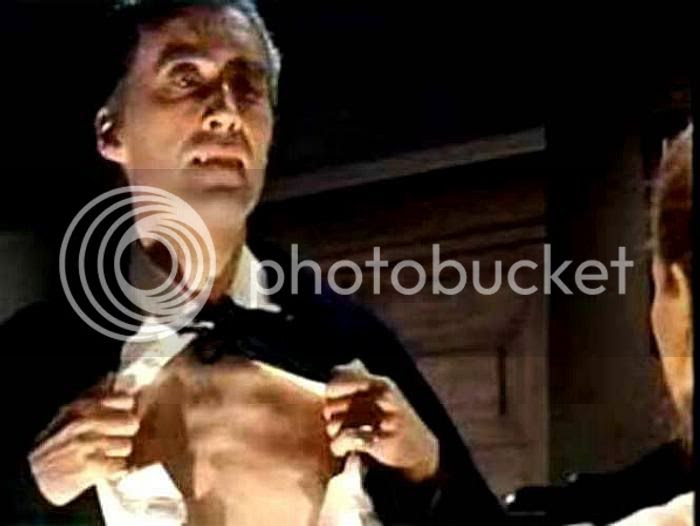 One thing I did not like about this film. Even though it has excellent production values and direction, we hardly get to see Dracula in this film! We dont see anything of him until 50 minutes into the film! You get a bit desperate after a while, to the point where you ask yourself, is this really a Dracula film? Where is the old Count? When he finally does show up, he is on screen for something like 5 seconds and then disappears yet again! Come on! We came to see Dracula luring beautiful women to his castle and sucking them dry, not his servant doing all the dirty work! For some reason they chose to deny us of his evil presence. Im guessing this had something to do with Lee, who really didnt take pride in working on these films. In fact, Christopher Lee agreed to work on this film, but decided not to say a single line of dialog because he thought the script was so bad! As a result, the count doesnt speak a single word through out the whole film! Not one single sylable! I think it was really stupid of Lee to deny saying his lines, after all, he agreed later on in his career to say some really bad lines in future Dracula movies like Dracula 1972 A.D. and The Satanic Rites of Dracula. But whatever, I guess he was a big shot during the early days of Hammer Studios and could give ultimatums such as this one. I can see Lee saying "Im not saying a single line of your stupid dialog! Take your stinking script and shove it up your ass!"

In conclusion, the film deprives us of what we want most of: Dracula himself. Its not very original in the story department because it was following a formula that for some reason just didnt care about telling a very interesting story. But as far as visuals, great sets and spooky atmosphere go this ones a keeper. No matter how simple the story is, the production is great, Hammer didnt need a mind blowing script to do a good horror film. And even though Lee is seen briefly in this film, whenever he is on, its still awesome, so I recommend this movie even though there are better Dracula films on Hammers resume.
Rating: 3 1/2 out of 5 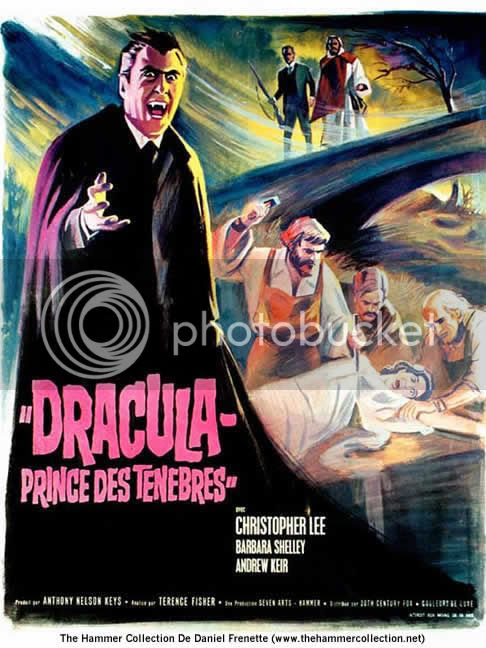 Havent seen this one either, mainly because I believe its OOP. Id be hard pressed to find a Hammer film that didnt at least have amazing visuals and beautiful sets, but its unfortunate to hear that Lee is short spent and Cushing isnt even in the picture. Ill definitely be picking this one up somewhere down the road.

Father Zandor was a bad motherfucker. He and Van Helsing should have appeared together.

Cushing only appeared in the first one Horror of Dracula and then re-emerged on the Dracula films for the two worst ones with Lee, Dracula 1972 A.D. and The Satanic Rites of Dracula.

Even though he didn't have any lines, when he DID show up, Dracula still rocked the shit.

How eerie was it though that one of the two couples were named Charles and Diana?