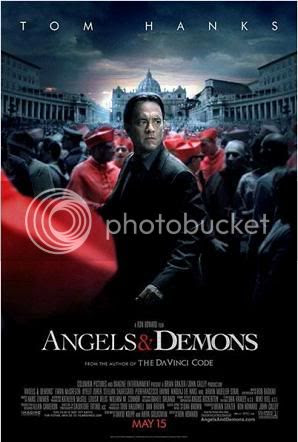 Director: Ron Howard
Cast: Tom Hanks, Ewan McGregor, Ayelet Zurer, Stellan Skarsgard
Review:
The Da Vinci Code was a controversial film upon its release in 2006 because it asked the question: Did Jesus get laid? And did he have kids? Wow, big freaking deal. I went to watch this movie expecting to see a shocking and sacrilegious piece of filmmaking, because of all the controversy and hype around it. What I saw was a film afraid to say what it had to say. Its main character was a non believer, a man of no faith at all,  yet it always seemed to me like the film was afraid to show this. The film in my opinion was not as controversial as it was made out to be. To top things of, it was a bit boring. And it just felt like Indiana Jones, but without the fun. Still, the controversy helped the film and it made kajillions of dollars worldwide. So fast forward a couple of years later and here comes its inevitable sequel, Angels and Demons. Again, lots f controversy surrounding this one. What’s all the controversy about this time around? 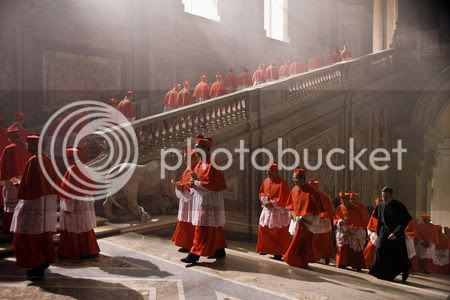 Illuminati terrorist want to blow up the crib of Catholicism - The Vatican - with anti-matter! You see, apparently, members of an ancient secret anti-religion group called “The Illuminati” have stolen anti-matter from a top secret science lab. They intend to blow up The Vatican right smack in the middle of conclave, which is Christian code for “lets choose a new Pope!” The terrorists have also kidnapped the four favorite cardinals who are running for Pope, and are slowly killing them one by one. Will the Illuminati succeed in eradicating the birthplace of Catholicism, along with all its popes and cardinals from the face of the earth? Or will Robert Langdon use all his knowledge on religion to help them find the hidden anti-matter and stop the Illuminati from killing the cardinals? 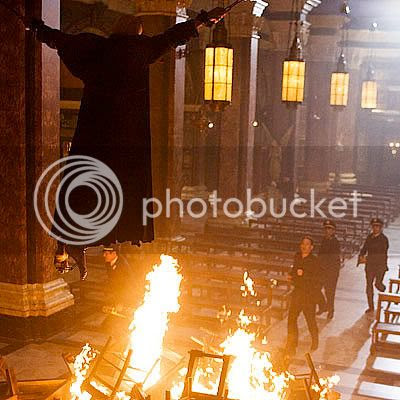 I for one found this movie to be way more entertaining then The Da Vinci Code. It’s a bit edgier with its themes. It dares to say more then the previous film did, but again, it does so with the utmost respect cause you know, we don’t want to insult all those raging Catholics out there who think their religion is the one and only true one amongst all the thousands of religions and sects in the world. So again, the film walks on egg shells when it asks Robert Langdon question like the ever popular “do you believe in God?” This was fine by me, because though the film was very respectful with what it was saying, it said what it wanted to say anyways. Like addressing many of the downright evil things that the Catholic Church has done across the ages, like for example killing off anyone who thought different then they did, like they did in the inquisition. They killed Galileo Galilei (one of the most popular examples of the ignorance of the Catholic Church) because he taught the idea that the earth moved around the sun as opposed to what the church taught, that it was the sun that moved around the earth and the earth remained still. We all now know who was wrong there. Eventually, empirical science proved Catholics wrong. And so, the Church realizing it had made a huge mistake said “I’m sorry, we were all wrong back in the day”. But that apology from the church came just the other day, on October 31 1992. Literally hundreds of years after they made Galileo’s life a living hell, simply for thinking differently. The film addresses these issues and mentions them clearly, which I loved. When the film begins, it feels as though the church’s sins are coming back to bite them in the ass, in a huge freaking way! 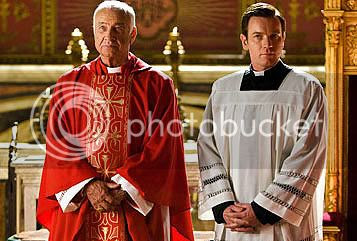 I enjoyed how the film depicts the whole process of choosing a new Pope. This is a process that I have always found interesting. Thousands of Catholics waiting in front of the Vatican for God to choose his next representative here on earth. I always ask myself, do this people actually believe this man is going to be chosen by God? Don’t they read history books? Choosing the next pope has always been a process that’s been filled with betrayals, murders, poisonings and this film addresses these same types of situations with its storyline. Across the ages, Popes have killed other popes and bribed voters just so they could take over the papacy. Just check out the story behind Pope Alexander VI! He even has incest in his resume! And he is not alone. What baffles me is how Catholics call the pope the hand of god on earth. If this is the representative of God on earth, then we have one messed up God! So Angels and Demons plays around with these themes, but it doesn’t do it out of “maliciousness” as it has been accused of by more then one reviewer. The film is fiction, yes. But its based on fact. Often times, these Popes are seen as holy by the ignorant masses, ignorant to the things that really go on behind closed doors. What I hate is how hard the Church always tries to hide the fact that these awful things happened within the Vatican walls. I also liked how Ron Howard chose to augment the feeling of chaos going on out in the streets. People screaming, complaining, boycotting, marching, singing...the confusion brought on by religion and politics is very well depicted on this film! 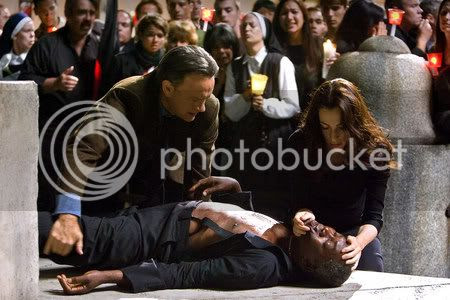 Angels and Demons is a good adaptation of Dan Brown’s book. I read the book and everything I read was in there, almost exactly how I had envisioned it, which was kind of strange! Its one of those films where you go “wow, that’s exactly how I imagined it in my mind!” Of course, it did cut a few things here and there to quicken the pace of things. But hey, it’s understandable, and the changes were minor. The part I missed the most that was left out of the film is the part where Robert Langdon visits the scientific lab where the anti-matter is created. The labs are still on the film, but they used them only as a means to open the film with something quick and interesting, the creation of the anti-matter and then we move on to other matters. On the book, Langdon actually visits these laboratories and all hell breaks loose as he is there. Filmmakers decided to cut this out and just cut to him going to the Vatican immediately. But for the most part, the movie is the book. 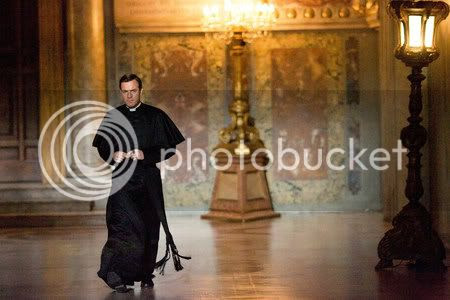 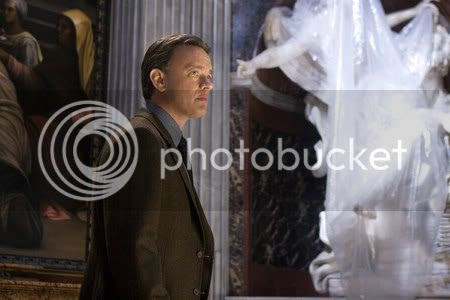 Again, I thought the film was very daring with its themes. The evil within the church, the dangers of fanatism, the secrets of the history of papacy. How the church distorts things, from how they really happened, to what they want you to think happened. How being raised in a religion from birth can actually turn you into a dangerous and even psychotic individual. These are all fantastic themes! The film plays with themes of religion vs. science and religion vs. non believers, it also addresses the fact that the history of the Catholic church is not as squeaky clean or as holy as it wants to be. In fact it’s filled with many dark passages which continue to be written to this day. This film was very entertaining, and thought provoking. Catholics opted to label this film as “harmless entertainment not to be taken seriously” that its followers can see it, but that they should let others know that its “a fable, based on malicious myths”. They decided to take this stand with the film, because they thought that if they decided to boycott film completely, it would only make people want to see it even more, which is what happened with The Da Vinci Code. Angels and Demons went on to become a huge hit anyways, the fourth biggest money maker of the year, so I guess their little ploy didn’t work very well. 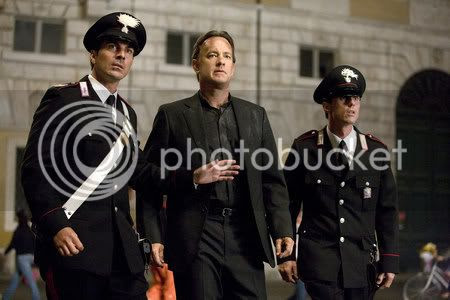 This was a fast paced, enjoyable flick that surpasses The Da Vinci Code in every way. It has an incredible climax that has to be seen to be believed! I not only loved it because of its themes, but also because it was highly entertaining, it was well acted, and it speaks certain truths that more people should know about, this isn’t just a film to be dismissed as some simple curiosity, it speaks about a very real truth that not many people want to face. Popes are only human, and as such have the same capacity for evil as you or I. They are not holy men with a special direct line to God. They are just humans, thirsting and coveting that desired seat of power as much as the next guy.
Rating: 5 out of 5 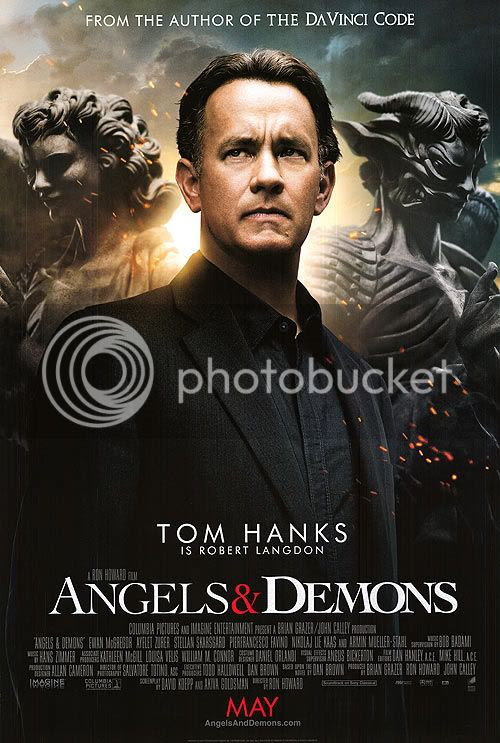 Well...i agree with you with everything you said about the church! Totally, although i wouldnt rate the movie 5 out of 5, maybe 4 out of five! Very good review

Why wouldnt you rate it five out five, what did you find wrong with it? I couldnt really find anything wrong with it, I usually start taking points away from a film, if theres things I dont like about them, but this one was pretty cool in my book!

You're on a blasphemous roll! I haven't gotten into these books/movies, but I have an outsider's interest in them. You're right; the Catholic Church is a fucking joke.

"It is not heresy! And I will not recant!" - Christopher Lee on To the Devil a Daughter

Dom, all I can say is that this one makes for a better watch then The Da Vinci Code, they even kill a couple of Cardinals in morbid ways!

Heres the thing, even though the film is "respectful" in a way, they still show shocking things like dead popes, tortured and mutilated cardinals. In a way, it was a classy version of SAW, with the death of the cardinals thing going on...

My real interest with this movie was watching The Vatican blowing up into smithereens! I hear ya, does it happen in the movie or not? I guess youll have to wait and see it.

But you can watch something similar in Roland Emerich's 2012 where the Vatican is smashed to rubble and not only that, it falls on top of all of its followers down below who were praying to god for salvation!

All I gott say about this movie is what everybody says about this movie: Man Tom Hanks has really weird fucking hair! Whats going on with Toms Hair? Its all over the place!! Whats wrong with his hair is the big riddle of this movie!!

Maybe he is trying the Nicholas Cage/Samuel L. Jackson approach to hair. Wear it differently in every movie.