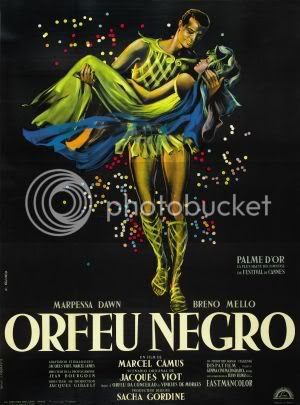 Title: Black Orpheus (1959)
Director: Marcel Camus
Review:
Every once in a while a movie that I’d never even heard of comes along and completely blows me away, like a beautiful surprise from the movie gods. I love it when this happens because it reminds me, no matter how many movies you’ve seen through your life, there will always be something new, different and beautiful out there that you haven’t seen. Its for moments like these that movie buffs live for. I recently had one such experience with the film Black Orpheus. 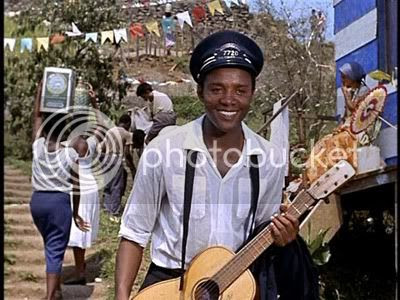 The movie is the story of Orpheus, a young Brazilian bus driver who is about to get married to his fiancé, Mira. Problem is Orpheus isn’t truly head over heals in love with Mira and he isn’t really looking forward to the day when he will marry her. So much so, that she is the one who puts up the money to buy her own wedding ring! Marriage days looms like a dark cloud in the life of Orpheus until the day when Eurydice comes along. They instantly fall in love, and Orpheus can do nothing but think of her. At the same time, death is following Eurydice around, trying to take her for himself. Will Eurydice escape the clutches of death? Will Orpheus rescue her and finally unite with the true love in his life? 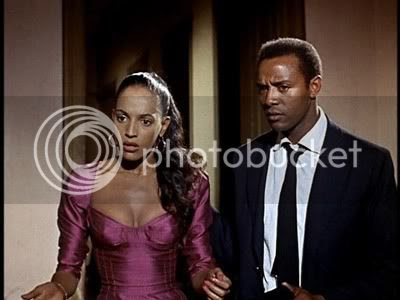 This film is based on the Greek tragedy of Orpheus, the play originally entitled Orfeu da Conçeicão was written by Vinicius de Moraes. Director Marcel Camus updated the story and placed in a modern setting, taking place in a favela in Brazil, and the whole film happens during a Carnaval! The Carnaval aspect of the film is what really brings it to life! This movie reminded me a lot of Federico Fellini’s Amarcord, or La Dolce Vita, where at some point characters are brimming with life and joy and happiness, everyone is talking, the city is making noise, people are laughing, dancing, talking, eating. Well, director Marcel Camus did the same thing here in Black Orpheus because the characters in the film seem to always be dancing their way from plot point to plot point. 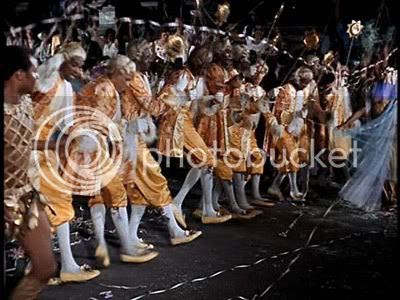 If a character is talking, they will do it with a smile on their faces. And when they finish talking and are going to go away somewhere, they go jumping up and down in dance! It’s a film that’s filled with kinetic energy and life. A huge part of this comes from the wonderful soundtrack which includes music from Luis Bonfa and Antonio Jobim. The music in this film is almost non stop, because the whole film takes place during a constant never ending carnival. But that Bossa Nova, it makes you want fall in love. I ended up dancing across my living room with my girlfriend after seeing this one, so I gotta tell you, the films happy joyus carnival atmosphere is infectious. 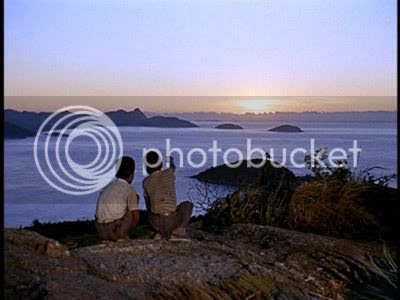 Apart from the music, the fact that the film was shot entirely in Brazil is one of its most beautiful aspects. Camus really wanted to make Brazil and its beautiful vistas seem magical, in accordance with the fantastical elements of the story he is trying to tell. You see, the film is kind of like a fantasy, with the mythical figure of death following Eurydice around. We all know death isnt a pyshical being (unless you believe the Grimm Reaper is real) but in this film it follows Eurydice around. There are many symbolical visual queues in this film, for example in one moment we get Orpheus going down a dark dark set of stairs which end in a room lit with red lights, extremely symbolic of Orpheus going down to hell. So you have to be looking out for symbolic visual queues like those. 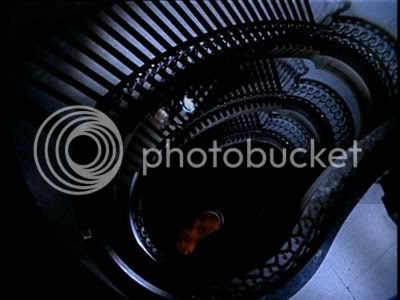 At the same time, the film has symbolisms towards themes of love, life and death. It speaks about how there is a true love out there for us, and when we find it, we must do everything in our power to protect it, which is what Orpheus is constantly doing, protecting Eurydice from the claws of death, which in this film comes in the form of a man dressed in black, following Eurydice around. At the same time it speaks about how life continues through children, because in the film there’s these two kids who really admire Orpheus and his guitar playing. They imitate him, want to be him, so much so that they take his guitar and try and play like him, trying to make the sun come up with the guitar music. 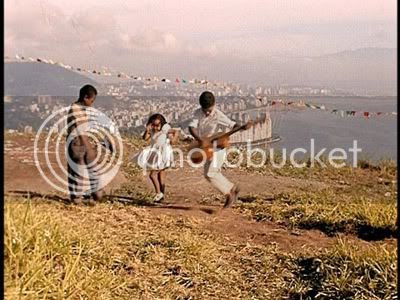 Though the film is a tragedy, because its based on one, it actually manages to end on a happy note, an uplifting happy feel letting us know that life is circular and continues long after death has taken us away from this planet. I highly recommend you check this movie out, its beautiful, filled with life, music, love…it will make you feel like packing your bags and moving to Brazil right after you finish watching it!
Rating: 5 out of 5 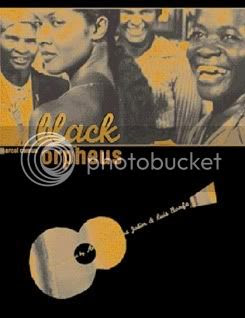 ahhh! Orfeo negro! Excellent movie and excellent review! I totally agree with everything you say! The music, the vistas, that language!Everything is contagious! The mivie is shot beautifully, the acting is pretty good, the story is beautiful, and the music is perfect, sooo beautiful, it makes me want to cry...Thank you for posting this one! I hope other people see it!!!

Glad you liked the review, I know now you want to go to Brazil more then ever!

Up next on my Brazilian film slate: Favela Rising.