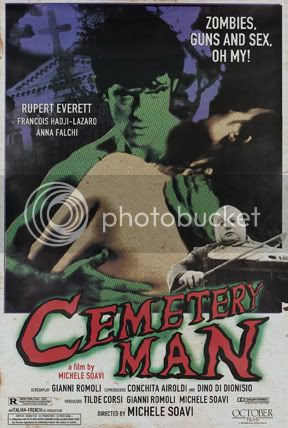 Title: Cemetery Man (Dellamorte, Dellamore) (1996)
Director: Michele Soavi
Cast: Rupert Everett, Francois Hadji Lazaro, Anna Falchi
Review:
Horror fans all around recognize Italian horror director Michele Soavi as Dario Argento’s understudy; Soavi is the guy who Argento taught everything he knows to. Ive enjoyed many of the films that Soavi has worked on or directed himself; among those are the Demons movies, The Church, and Stagefright; all good in my book. In 1994 Soavi directed Dellamorte Dellamore which was released in the United States as Cemetery Man. The film was based on the Italian Horror comic called Dylan Dog and it presented us with yet another excellent film from Soavi! This wasn’t your standard zombie gore fest. This movie had a little more going for it, what was it? Oh yeah, some freaking originality! 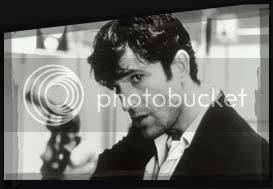 Story is about this guy named Francesco Dellamorte who works as a caretaker at the local cemetery. His  day to day chores include burying the dead and sending them of to the afterlife and then making sure they stay there. Only problem is that in this cemetery the dead rise after seven days of being dead! Soon Francesco finds himself knee deep in zombies! Weird thing is he treats the dead coming baclk very matter of factly. He just kills the zombies and continues with his life. Is this all life has to offer to Francesco? Apparently not for Francesco ends up meeting this gorgeous bombshell during a burial, which he immediately falls for. Suddenly, it looks like Francesco’s life will not only revolve around death anymore. Apparently love is just around the corner for this grave digger. 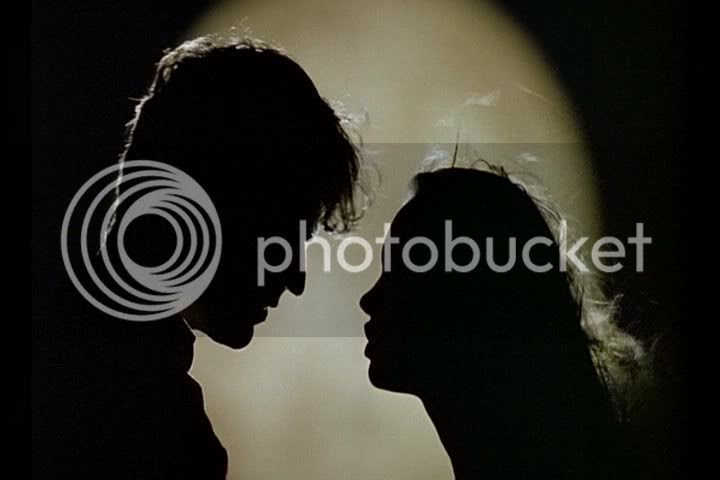 I had seen this movie many years ago when it first came out on VHS. I’d read so much on Fangoria magazine about Cemetary Man, hailing it, saying it was fantastic and all that. This was way back when internet was in diapers, when you actually had to read magazines to stay up to date with film releases. When I finally saw Cemetary Man for the first time, I just didn’t get it. I didn’t get what all the hoopla was about. Kind of like when I saw 2001: A Space Oddysey for the first time, at first I thought it was boring, but then I realized just what a masterpiece it is. That’s what happened to me with Cemetary Man. Years went by and the second time I saw it I saw it with my new Film Connoisseur eyes. Back then, when I saw it for the first time I was a movie buff in diapers. Now that I’m more of a seasoned veteran when it comes to horror movies (I am The Film Connoisseur after all) I can appreciate the greatness of a film like Cemetery Man. It truly is a special film and a treat for horror fans. It’s a treat for lovers of good films in general. That’s the thing about this movie; it will more then likely appeal to non horror fans as well. You see my friends, in my book, Cemetary Man elevates horror movies to another level of artistic thought provoking achievement. It’s not just hacking and slashing. Its not just gore for the sake of gore. Thats a lot to say coming from an Italian horror film! Not only is this film horror, it is also art. 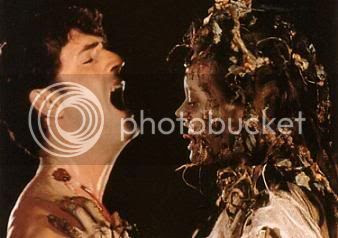 One of the things I admire most about this movie is its atmosphere. The locations where they chose to shoot the film were fantastic and beautiful. Italian filmmakers are so lucky! They have such a beautiful country to make their movies in! Take for example the scenes that were shot on real cemeteries! They add a level of reality to the proceedings. This cemetery looked real, filled with real graves and awesome gothic statues. Many scenes are just pure artistic genius, oozing atmosphere. Some scenes are filled to the brim with skeletons, graveyards, full moons, fog, crosses, I mean at one point it was just pure orgasmic pleasure for me as a horror/film fan to look at this movie. Scenes like the one were Francesco Dellamorte is making out with the girl on the graveyard and we see these dark wings from the statue behind them and they look like they belong to Francesco. Or the scene where Gnagi (Francesco’s best friend) puts a zombie girls head inside of a T.V. set to be entertained, as if he was watching some sick twisted T.V. show, make this movie extremely original and artistic for me. Be ready for a horror movie that breaks out of the norm and takes things to another level. 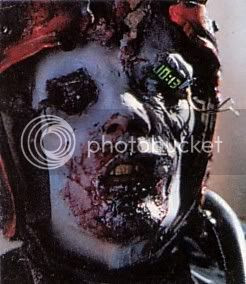 Rupert Everett is a real asset to this film. I cannot imagine anyone else playing Francesco Dellamorte. Its his role and no one else’s. He dominates the screen as a guy who has gotten so used to living amongst the dead, that he actually prefers living amongst them. They don’t pester him as much as humans do. He doesnt really fit in with the rest of humanity, so he becomes a hermit, living in the cemetery, amongst the people he buries. The picture of a tortured and isolated soul. I also dug Francois Hadji’s performance as Gnagi; Francesco’s assistant and best friend. He is a cartoon of a character, sometimes retarded, sometimes funny and most of the time just gross to look at. Then there’s the incredibly hot Anna Falchi who is simply known as “she” in the film. The girl of Francesco’s dreams. The feminine element in his live, finally bringing love and lust where there was non. To be quite honest I don’t blame him for falling for her! This girl is hotter then Georgia Asphalt! Soon she becomes the object of Francesco’s affections. Man, this movie has some steamy sex scenes! There’s some female beauty to behold on this film! Don’t miss out! (This concludes the chauvinistic pig part of my review) 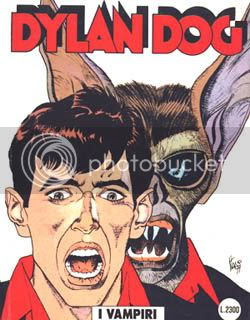 This is a cover of one of the Dylan Dog Comics the film is based on
Of course the movie does have a few flaws here and there. Technical difficulties were present. For example, there’s a scene in which Francesco’s making out with the girl on top of a grave and some ghostly lights appear next to them. They are little balls of blue flame floating around, now this is a very cool idea which made for an awesome visual, but I was so distracted by the fact that you could actually see the strings that were holding the little light balls up in the air. I really hated that and wished they’d taken a little extra care so that those strings wouldn’t show up on screen. But I do take in consideration that this film was made before CGI was common place, and things like that could be fixed in post production. Same thing goes for a scene in which a fly is hovering above a corpse. The strings holding the fake fly were obviously visible through out the whole thing. But that’s about as far as I go when it comes to faults on this movie. The zombies were excellent looking and very different here. The gore was great too and not as plentiful as one might expect from an Italian horror production, but it was there. 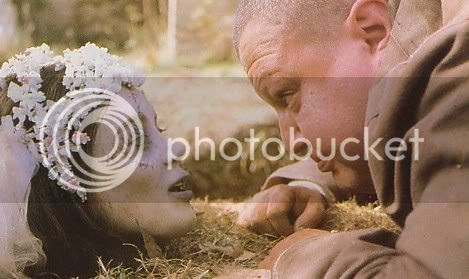 The film is extremely symbolic at times. And it doesn’t do a good job of explaining exactly what is going on in the film. I don’t exactly know how viewers are supposed to grasp certain elements of the film, but I guess its like a little puzzle that you’ll have to figure out if you really want to. What I will say is that not everything is literal in this movie. Theres lots of symbolisms and dream logic involved. That’s it, not saying anything else.
So in conclusion, Dellamorte Dellamore is a fantastic film from Michele Soavi. I only wish he would make more horror movies. The ones that he has made are amazing. Anybody out there seen Stage Fright? Wow. An amazing slasher. Highly recommend it as well. Sadly it seems he has retired from directing horror. Still, Dellamorte Dellamore is his crowning achievement and shouldn’t be missed by horror fans just because its a foreign film. This film has many original ideas not seen on other horror films before, its artsy, its surrealistic and dreamlike, its beautiful to look at. In short, I freaking loved it!
Rating: 5 out of 5 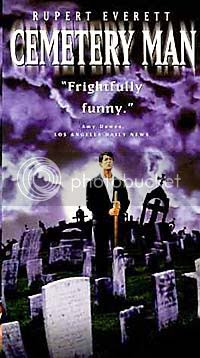 no arguments here, and nothing much to add man. Your review is pretty much on. A perfect film in basically every level.

Hey man, you wouldnt happen to have a copy of Soavis "The Sect" would you?

I see a movie night in the horizon..

nah man I don't have it either, I want to see it too.

This is quickly becoming my new favorite blog, we have very similar tastes my friend, DD is superior dark fantasy Horror that is brilliantly shot and has a sinister humor to it. I literally just got this back from a friend at work who I forced the film upon, and he loved it. Sure as hell didnt understand it, but loved it.

Hey thanks for the kind words man, glad your enjoying the blog!

Cemetery Man is best when viewed and reviewed a couple of times. Theres many hints that let you know Francesco Dellamorte has a fractured psyche, did you pick up on those visual hints?

What did you think about Nagi?

Anyhows, I love watching this one and analizing it, its deeper then most people think. I think it can be enjoyed on two levels. One, as a crazy zombie movie, two as a film about a man with a fractured psyche.

I am still unraveling the films mysteries, but I have often questioned whether or not Nagi was a physical manifestation of a split personality, a friend created out of loneliness. I love his portrayal, and found him to be a very endearing character, whether or not he really existed.

Thats exactly what I got from it Carl! In some scenes, Gnagi is like his childish side, the side who wont even dare talk to a girl when he has to.

And it serves as his friend. He has no friends and cant seem to connect with anyone in the real world as seen in that sequence where those bikers make fun Francesco.

Havent seen the movie in a while, gonna give this one a re-watch soon, its defenetly one of my favorites.

First time I saw Cemetery Man was with Moe and you! When it first arrived on VHS all those years ago!

You gotta hand it over to Rupert Everett for having the capacity to branch out in this movie, not to mention acting very well during his sex scenes with the 'She' character, given Everett is a raging gay. Well done, sir.

Yup, true. But I couldnt really see anyone else playing it, so I guess hes a great actor. I guess that puts him o n the same category as Heath Ledger, who played a gay guy though he wasnt one.

Im thinking this is one of the toughest things and actor would have to endure.

Back then when I had a zombie streak, This was my repeated viewing. There's nothing like this weird yet dramatic horror-drama. Great review, mate!

Fantastic film, worthy review. I just noticed 'Dellamorte Dellamore' and 'Dylan Dog' share their double-D initials... I'm sure some of you began thinking of Anna Falchi when I wrote 'double-D'.

Did you all know that Dylan Dog's face was modeled after Everett's? He's definitely a very convincing straight lead, so props to him.

So the comic book artist always had him in mind from the very beginning, I bet he was happy with that casting choice!

Thanks for commenting Madame Enfer!