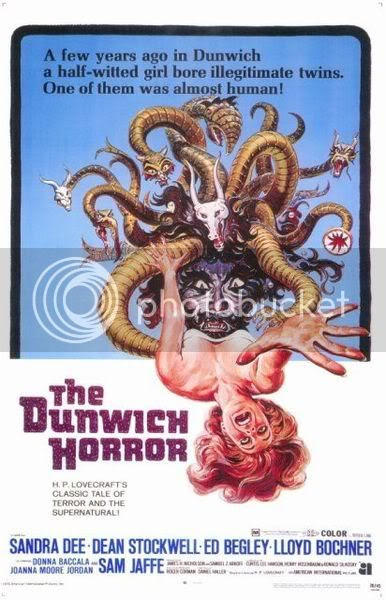 I'll start this review by saying that Ive read quite a few of H.P. Lovecraft's stories and that I love them. A lot of them are about otherwordly creatures who used to dominate earth once upon a time and now they are looking for a way back in, to conquer and dominate the earth once again. Essentially, this movie plays with these Lovecraftian themes, only thing is that it does it with a distinctively cheesy Roger Corman b-movie feel to it. Was the film any good? Did it pay respects to the H.P. Lovecraft short story that inspired it? 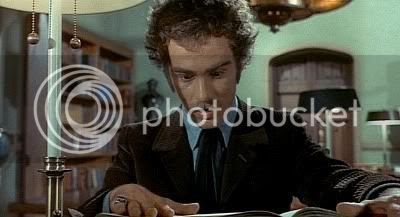 Well first lets start out with the story, wich was about this guy called Wilbur Whateley, who is very interested in 'The Necronomicon' a.k.a. The Book of the Dead. He has a downright voracious appetite for it! He needs to read it because this book explains how to bring "the Old Ones" here to earth. He goes to the Miskatonic University (which actually has one of the few copies of the book) and ask for it, to inspect it closer and read a few of the passages that let him know what he has to do to bring "the Old Ones" back. While there he meets (and enchants) Nancy Wagner a young girl to wich he is strangely attracted to. He basically plays a jedi mind trick on her and manages to convince her to go with him to his old mansion in the town of Dunwhich. You know, for the weekend. Soon after that, he decides he will use her to perform a ritual wich will bring "The Old Ones" back to earth and therefore bring upon the destruction of the human race! 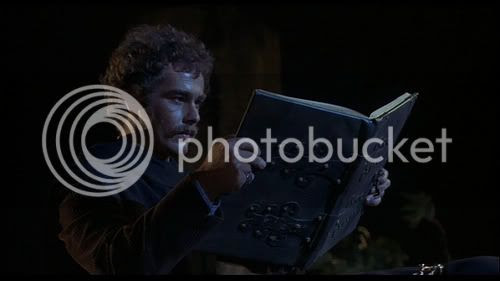 The Dunwich Horror has this really weird aura to it. Its got a weird feeling of unease and a lot of that has to the with Dean Stockwells eerie and quirky performance as Wilbur Whateley. He is so quiet and mild mannered yet you get the feeling that he has some dark purpose to his actions...you get the feeling that something is not quite right with this guy. Theres something in that look that he gives that is unnerving. Then of course this being a movie based on an HP Lovecraft story that "weird feeling" feels just right. Like many of Lovecrafts stories this movie has that feeling of going into the unknown, of discovering an otherwordly thing that has existed for eons yet we know nothing about. Of knowledge of the universe that could drive you MAD! 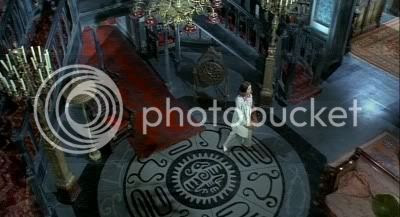 One of the best things about this movie is its art direction and its ligthing. As we all know, these are two very important aspects of any good horror movie. The ligthing sets the mood, and in this movie we get dark corridors, filled with shadows and mysterious rooms. The interior of the mansion itself is pretty effective. Lots of old books, statues ancient runes. Love that about the movie! Theres this really eerie scene where we get to see the mansion from its exterior and the house is creeking and making all these weird sounds, and everything looks rotted and ugly, this type of thing just makes everything all the more spookier. What I liked about it as well is that the film was shot near the Ocean, which is perfect for any film of Lovecraftian nature. Remember, Lovecraft was sometimes about ancient creatures coming out of the ocean, like in Stuart Gordons Dagon, another excellent Lovecraftian film. 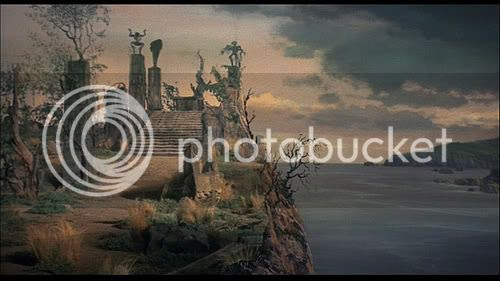 This movie is vaguely similar to H.P. Lovecraft's original tale. Lovecraft's original story concerns a small town in the middle of nowhere. In that story, the people of a small town out in the sticks are freaked out because something appears to be living in the nearby woods, something alive, something that smells bad, something that burns the woods to a crisp! What is it? Many people think it could be the offspring of that weird Whateley family! Thing is, that the film is very different in tone, and changes many situations around, so do not expect a faithful adaptation of the book. Simply expect a film that was inspired by it. Something that exists within Lovecrafts universe. Characters end up talking about the Necronomicon, The Miskatonic University and "The Old Ones" so lovers of Lovecraft should feel quite at home with this movie even though its not really a faithful adaptation of the story its inspired by. 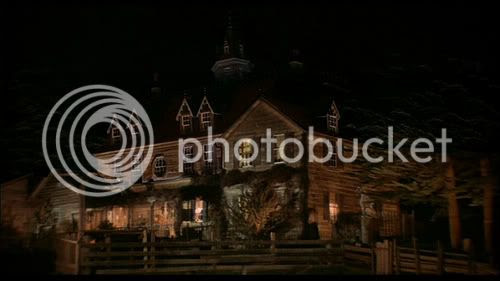 In many ways, this film feels a lot like The Wickerman, Silent Hill or Rosemarys Baby. The kind of movie were you know something werid is going on, but your not quite sure what it is. Thats the vibe I got when I saw Wilbur pulling his dirty tricks on Nancy, slowly luring her into his world. Same deal with all these other movies about weird cults, at first the bad guys charm you and pull you in, then they pull out their claws and you end up on the sacrificial altar. Thats the vibe with this movie, movies like that always get under my skin. 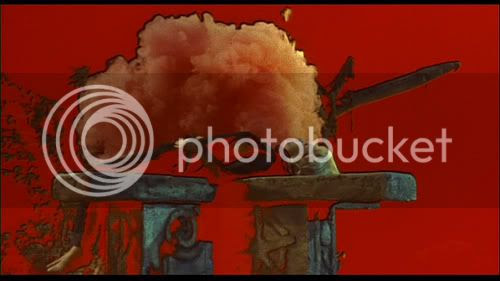 Then theres "The Old Ones", the creatures that are trying to come into our world and take over. Theres this build up in the film, all this talk about these creatures that impregnated Wilbur...and Wilbur might actually be one of them, so kind of get restless to see the damned things. Well, the creature finally appears in the film, unfortunately, this is where I was completely dissapointed with the film because the monster is a cheap cop out. All we see is the monsters point ov view, which consists of a bunch of psychodelic colors flashing on the screen. Its ultimate purpose is to not let you get a good look at the cheap ass monster they made for this movie. They dont really let you get a good look at the damn thing, and as we all know that is the sign to look for when a film is ashamed to show its creature. When the make up effects guy couldnt come up with something that would look decent on screen, they try not to show it too much. Kind of like those Predaliens in Alien vs. Predator: Requiem. 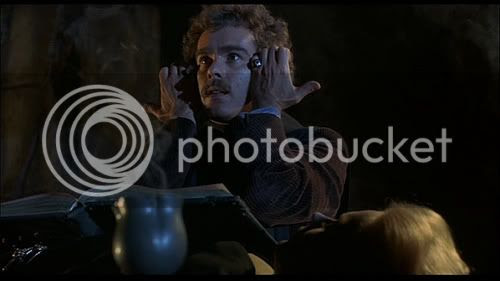 But ultimately, this is not a bad film! What saves it is Dean Stockwells performance! Its so over the top and spaced out, that it keeps you glued to the screen. And when he dons those ceremonial garments and is getting ready to sacrifice the virgin in an altar to the Old Ones, I was a satasfied Lovecraft fan. I was just so damn dissapointed with that cop out on the creature, otherwise, the film is great. It has great atmosphere and a cool story going for it. 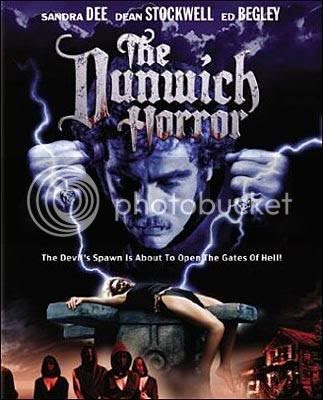 I have been wondering about this one for a long time, but never picked it up. I have made it a rule that any review that references The Wicker Man in a positive light must be worth checking out, so I will jump on Dunwich whenever I get the chance

This film is defenetly along the veins of Wicker Man...a strange cult looking to sacrafice. If only the filmmakers had made an extra effort to make a cool looking monster...but really, its the only dissapointing thing about the film.

Its similar to Dagon in this way. You only get a glimpse of the creature.

Oh man, one more thing I forgot to mention in my review, the film has the most awesome animated title sequence, gives the film a very 70s feel! Its filled with pagan images of giant gods and human sacrifices...very Lovecraftian, but also very 70s. That animated opening title sequence is one of the things I enjoyed the most about it!

It was so odd to see Dean Stockwell in this one. I was always used to seeing him as Al from 'Quantum Leap'.

I wonder what would happen if Stuart Gordon got his hooks into this one? The man loves Lovecraft, doesn't he?

He sure does, almost every film he has done is Lovecraft related. Re-Animator, From Beyond and his best Lovecraft themed film Dagon.

I hear Gordon is actually trying to get a film based on another Lovecraft story made, its called "The Thing on the Doorstep".

And that fourth Re-Animator film thats waiting to happen, House of Re-Animator just hasnt materialized. Which sucks, cause I would love to see Gordon back on Lovecraft themed movies.