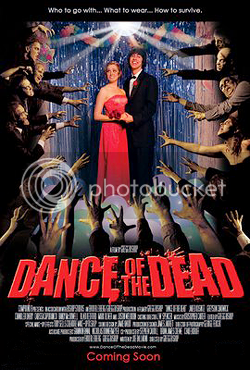 
So I’m a huge zombie fan, and I love those days when I discover a cool new zombie flick. Recently I had one such day when I finally got to see the excellent Zombieland  which rocked the house! The film I will be reviewing today -Dance of the Dead - falls under this category of fun fast paced zombie films. Dance of the Dead comes to us from Sam Raimi’s horror film production house Ghosthouse Underground and director Gregg Bishop. I find these straight to DVD production companies like Ghosthouse Underground, Dimension Extreme, 8 Films to Die For and After Dark Films to be interesting because they give new upcoming filmmakers the chance to show what they are made off. You think you got what it takes to make a horror movie? Well, this is the place to put your film where your mouth is rookie! In this case, the rookie is Gregg Bishop. He’d made another straight to dvd horror film called The Other Side and had a short film he made in filmschool called Voodoo under his belt, which by the way you can see on the dvd extras. Did this guy have what it takes to make a decent horror film?

Plot goes something like this: a bunch of high school kids are getting all prepped up for their upcoming prom dance. Everybody is asking everybody out to the dance “you going with anyone? Will you go with me to the dance?” and all that hoopla one goes through during those years in life. Problem is, their town is right next to a nuclear power plant! Before you know it, the toxic waste generated from the plant starts bringing the dead back to life. Will the kids get to rescue their friends at the prom before the zombies get to them? Or will we end up having a Dance…of the Dead? 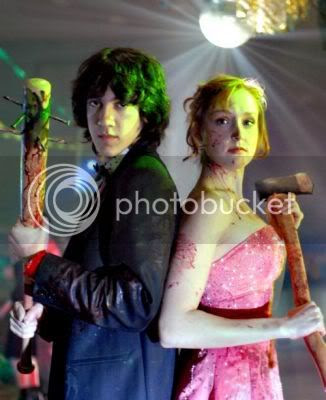 So yeah, this film starts with a bunch of teenagers trying to get dates to their proms and all that. It has an assortment of teenagers amongst them the preppy kid, the stoner, the heavy metal band, the poor kid, the nerdy girl, the cheerleader, the geeks…you know the drill. The thing I noticed about the movie though is that these teens all live in a well off neighborhood where everyone’s got a huge house, big cars and new clothes. Everyone is colorful and squeaky clean. Even the freaking heavy metal band looks squeaky clean! All their guitars are brand spanking new, as if they’d never played them before or something? That’s one thing that I kind of didn’t like about it. These teens look like Disney Chanel kids. Right out of the Mickey Mouse Club or something. Super colorful, and clean cut even the ones that are supposed to be rebellious look nice. So just get ready for that about the movie. Hell, they even break out in prayer at one point before going out to kill the zombies if you can believe it. There they are, about to go up against the zombies and suddenly they hold hands and start praying for god to help them! Thank god that the main character in the film is the poor kid, who delivers pizzas for a living! And the heroes of the film are the geek squad! Once again, it’s the geeks who are the heroes in a film, it’s a fad that’s becoming increasingly popular in movies today. Make the geeks the star of the film!

So this squeaky clean/conservative batch of kids kind of got me worried. But the poor kid and geeks held me on the film. Cause really, who wants to root for a bunch of stuck up rich kids? But then I thought, why not? Zombies can attack a suburb filled with Disney Chanel rejects as well, why the hell not. So whatever! I just decided to go with the films colorful conservative teens. So, the zombies start to come out of their graves because there’s a leak coming from a nearby Nuclear Power Plant. Which is kind of ridiculous when you think about it because no one in their right minds would live THAT close to a nuclear power plant! You see it in The Simpsons, because that’s a cartoon, and it’s an exaggeration of reality. In the real world, most of these power plants are out in open areas, miles away from any civilian areas. Not right next to a suburban neighborhood or a high school! So anyhows, I guess that’s the tone the film wanted to go with. Cartoonish in nature. So I went with it. I’m a real easy going person when it comes to fantasy/sci-fi/horror movies and I accept most of these films for what they are: a complete fantasy. Horror films can show us whatever they want to. It’s the filmmakers’ job to make you believe the bullshit. On this one, I went with it cause I thought, whatever, this is a cartoony zombie movie made by a generation raised on The Simpsons. 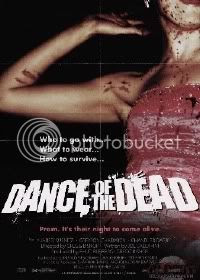 So then the zombies start popping out of the graves. I thought this film had a really original idea. The zombies don’t just come out of their graves, they freaking jump out of them! As if expelled from a catapult or something! Suddenly Zing! There goes the zombie up in the air. I thought that was something new in a zombie film. I liked the way the zombies looked as well. The make up effects was decent for the small budget they had. The zombies ranged from the really decaying, to the recently deceased. The zombie gags were cool, we get chopped off heads, ripping out of tongues, torn limbs, zombie love, we get a cool assortment of zombie effects and gags. The movie tries to present us with new things we haven’t seen a million times before, like the zombies that are hypnotized by heavy metal music. In zombie films, zombies can sometimes be easily distracted by anything. I remember in Return of the Living Dead Part II, you could distract the zombies by putting an Aerobics show on T.V., in Land of the Dead you could distract them with fireworks, on this one, you can distract them by whipping out your guitar and playing some heavy metal! By the way, this film has a lot in common with Return of the Living Dead Part II. It takes place in the suburbs, its fast paced and its a comedy. Just thought Id mention that. 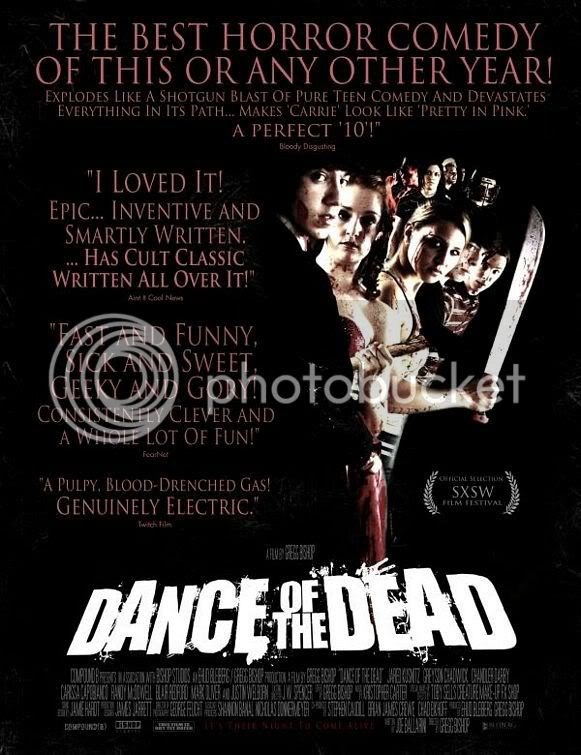 This was a fun movie, it’s fast paced. Once the zombies come out, the zombie mayhem never stops! Just remember, the tone of the film is very light, it’s a zombie comedy aimed to make you laugh more then scream. It has amusing make up effects and is way better then it should have been for the kind of budget it had. So it was a great offering from the folks at Ghosthouse Underground/Lionsgate. And a fine way for rookie director Gregg Bishop to show his directorial skills. Not a bad movie to watch on Halloween night, if you can stomach the squeaky clean ‘Disney Chanel Kids’ that star in it. 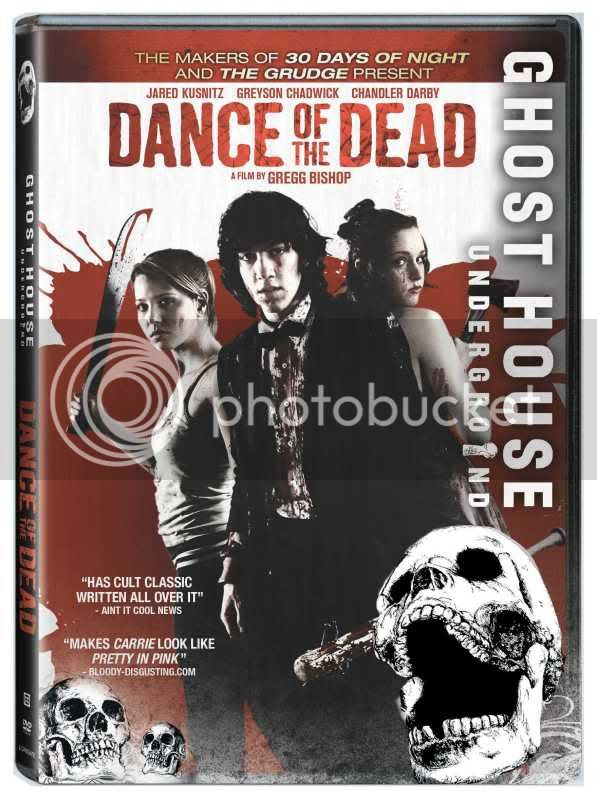 Im suprised you mentioned that you never seen zombies jump up out there graves before....ahhh..Dead Alive???....remember??? Just fucking with ya bro, too bad i couldnt see it that day at your house.

If I would have gone into this one blind without having read all of the ridiculous praise from Bloody Disgusting I may have liked it more, but I was disappointed after the first two viewings. It is better than average for an indie flick, but it didnt do much for me. Felt too "teen-edgy". I like the concept, execution fell short IMO

I agree with you Carl, it did get too much praise for what it is. A silly zombie flick aimed at teens.

But I thought it was mildly amusing at times, never boring, and had many zombie gags. I liked that sequence were the guy sees that one of the cheerleaders is bitten, so she begs him to stay with her until she transforms, then she bites him, turns him into a zombie, then they both start kissing as zombies!

Not unheard of though, Id seen zombies making out before in that japanese zombie movie, Wild Zero. Seen that one? Highly recommend it if you havent!

I loved this movie! I liked Shaun a littler better, but I actually like Dance of the Dead better than Zombieland.

I loved the kids because it reminded me of a John Hughes movie! It's like what would happen if John Hughes characters got attacked by zombies. lol

I think it deserved all the praise all of the critics were giving it. I mean, me and my sisters watched this thing 3 times in a row after we first saw it. lol

Cult classic for sure.