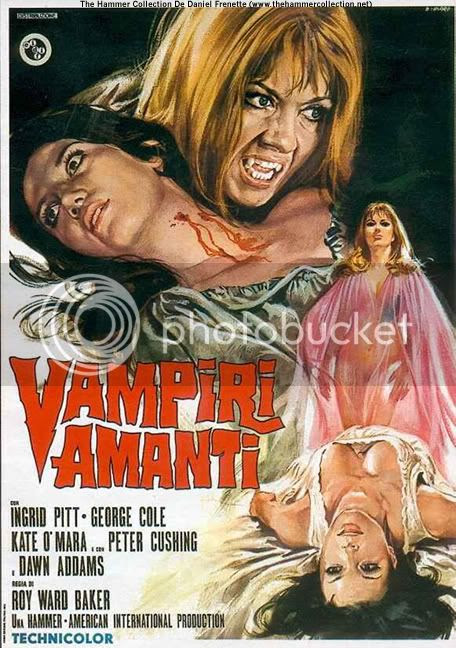 Title: The Vampire Lovers (1970)
Director: Roy Ward Baker
Cast: Ingridd Pitt, Peter Cushing, Madeline Smith, George Cole, Kate O Mara
Review:
As I have mentioned before on my previous Hammer film reviews, Hammer had a way of making their vampire movies. And I love it. Full moon, plus spooky castle at the top of the hill, plus fog, plus unsuspecting wanderers, plus vampires = A Hammer film. But I find myself enjoying the films that deviate from Hammers formula for vampire movies a whole lot more. The director of this film, Roy Ward Baker was the one director on Hammer's Studios roster that strived to always make something different with his films. On this one we have lesbian vampire chicks falling in love with their prey! And this film has nudity! 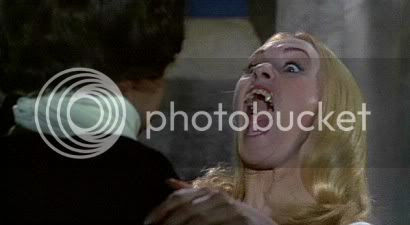 The story is about a vampire vixen known as Carmilla Karnstein. She belongs to a family of vampires that used to plague the local townsfolk. She has a modus operandi where she looks for an excuse to end up in someones home, then she proceeds to feed on them. It seems that Carmilla has a preference for female blood since thats practically all she does, feed on young girls. Her next victim is the innocent Emma whom she has just met and instantly befriended. But Carmilla faces a problem this time. This time she has fallen in love with her prey! Suddenly, Mircalla has an internal battle. What will be stronger? Her need to feed or her need for love? Carmilla wants Emma to love her "Her whole life!" as she so erotically puts it in one scene. This film is based on the novella Carmilla, a Gothic vampire novel written by Joseph Sheridan Le Fanu in 1872, and it tells the story of a young woman's susceptibility to the attentions of a female vampire named Carmilla. The novella Carmilla actually predates Bram Stokers Dracula by 25 years! This is just one of its incarnations. This little novella has actually been adapted to film on various ocassions. Hammer Studios made three films that dealt with the Carmilla mythology. Vampire Lovers (1970) was the first, and it was followed by Lust for a Vampire (1971) and Twins of Evil (1972). This film isnt a faithful adaptation of this novella, but it uses the Karnstein family as a means for the vampiric threat. Its one of those films thats not really interested in being faithful to the source material. They simply used the name of a famous book to give it some credibility. 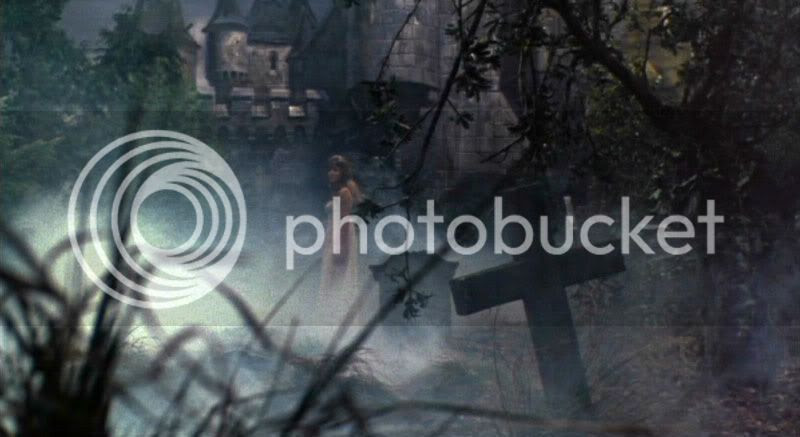 This film starts off with a great opening sequence wich is loaded with Hammers mandatory atmosphere. Starting out with a scene like that lets you know that this director hasnt forgotten what we love about these old Hammer films. Mainly all the gothic atmosphere! And theres lots of it on this one! It's one of the things that makes a Hammer film a Hammer film. Theres scenes that take place in grave yards, theres a lot of shots with the full moon in the back, the wind blowing, you know, the whole Hammer thing, which is great cause I hate it when they try and leave that behind and set things in modern times. I like the magic and the atmosphere of the old castles, the graveyards, the fog. And though this film is a bit different then your regular Hammer flick, we still get the atmosphere we've come to expect from these films. It doesnt veer off too much from the path. 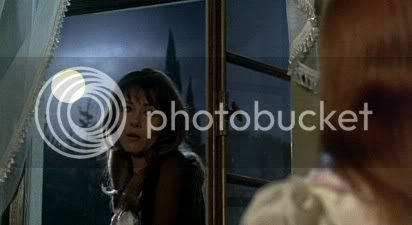 So whats the element that makes this one a bit different? Well, before this film, nudity was unheard of in a Hammer film. Vampire Lovers was the film to pop Hammer Studios cherry so to speak. And trust me, there's lots of nudity in Vampire Lovers! Ingrid Pitt and Madeline Smith always find a way to end up naked on screen. Theres this one hilarious scene in which Carmilla (the voluptuous Ingrid Pitt) is taking a bath and she gets up, and runs around the room after Emma trying to get her towel. Its the most shameless excuse to have so much nudity in a film! I thought it was funny, and at the same time, of course super hot! Both Ingrid Pitt and Madeline Smith were some of the most beautiful actresses on the planet at their time. Nudity scenes like the one Im referring to here are very gratuitous, and have nothing to do with the story. These scenes were just squeezed in there to please the largely male audience. Im sure more then one Hammer fan was happy about these scenes, which by the way are many. This film got into some trouble when it came time to rate it because of the lesbian theme it so heavily portrays. Actually the two films that followed this one (Lust for a Vampire and Twins of Evil) both toned downed their lesbian theme. Lust for a Vampire actually had Carmilla fall in love with a man, which completely goes against the nature of the character represented in the book. 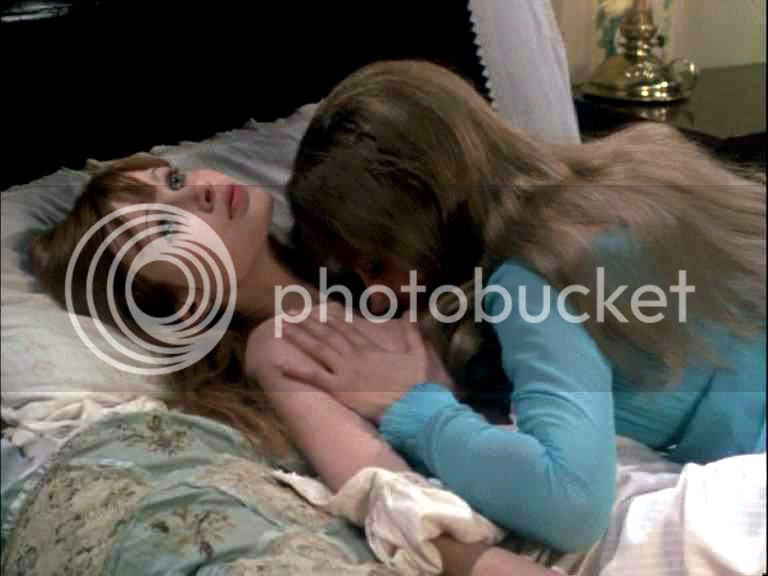 It's easy to say that what makes this film special is the nudity. That would not make it a good film perse, just a film with lots of nudity. But putting the nudity aside, this is one excellent vampire film! The story is really what blew me away, watching Ingrid Pitt and Madeline Smith running around naked in their room was just a really juicy extra. I thought the idea of having a vampire vixen falling in love with one of her victims was a very original one. Not only that but she also seduces the men, and the rest of the ladies in the house! Carmilla is one viscious vampire vixen! Ingrid Pitt's scenes are really good in terms of acting as well. I dont know what it is about her voice, but Ingrid Pitt has that kind of voice where, no matter what she says, it ends up sounding sexy! I have no doubt in my mind that during the 70s she was considered the embodiment of all things beautiful and erotic in a female. Thats what I love about films. I love how they can preserve a moment for ever. Ingrid Pitt and Madeline Smith's beauty is frozen for all eternity on this film for future generations to enjoy! 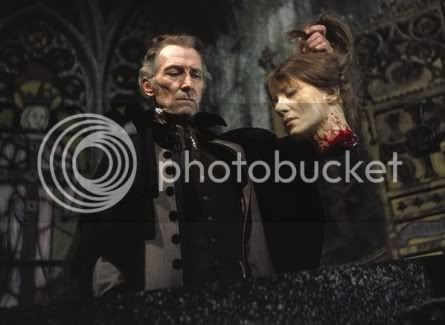 At heart Vampire Lovers is really a love story with a vampire twist and in my book, it really works. I would have no problem in saying that it is one of the best Hammer films Ive seen. All thanx to Roy Ward Baker, who directed some of the best Hammer films, among them Quatermass and the Pit and Scars of Dracula wich is one of my favorite of the Hammer Dracula films. On Vampire Lovers he not only kept what we know and love from Hammer films, but he added the sexy angle to it, and he even put some gore in here to keep things interesting! Theres more then one beheading on this film. 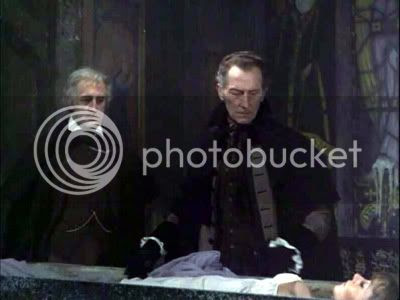 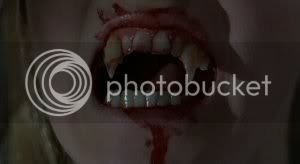 One thing I didnt get though is one character that shows up in the film. Every time Carmilla attacks or eats someone, theres this mysterious character on a horse who never says a word. He just stares and laughs revealing his teeth. You end up thinking that this guy might be Mircallas master or something, but sadly that plotline is never explained. Also, they play around a lot with the rules of being a vampire. In certain scenes Mircalla actually walks in the daylight and lets not forget the fact that vampires are supposed to hate water, yet on this film Mircalla is shown taking a hot bath! Not exactly something that a vampire would be doing in my opinion. These are really minor setbacks in what is otherwise an excellent vampire film. 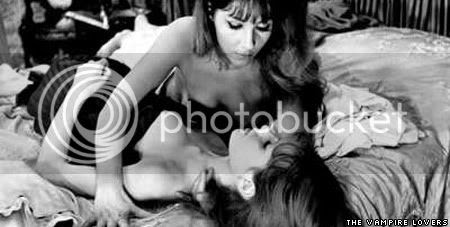 If you are on a hunt down to see the best Hammer has to offer, you cant go wrong with Vampire Lovers. Its one of their best films, with an involving storyline, Hammers delicious atmosphere, a decent amount of gore and of course, the two beautiful bomb shells known as Madeline Smith and Ingrid Pitt. Whats not to like? Go get this one right now! You'll thank me later.
Rating: 4 1/2 out of 5 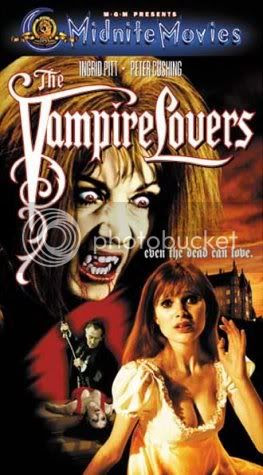 Agreed. This movie is awesome as fuck. I get boners just thinking about Ingrid Pitt and Madeline Smith

Ingrid Pitt looks so viscious on this movie, and Madeline Smith so innocent and pure. Perfect mix!

And they are both hot as freaking HOT!

Just recently got to see this one as part of a drive-in quadruple feature of later period Hammer movies (they also showed 'Seven Brothers Meet Dracula', 'Satanic Rites of Dracula', and 'Vampire Circus'). 'Vampire Lovers' definitely holds up the best of the four.

As for vamps walking around in daylight, Dracula does it in Stoker's novel, too. He's weaker during the day, but sunlight doesn't kill him. I think the idea of vampires being killed by sunlight was a later invention, and not actually in the original folklore.

Man, I need to see this flick. Bob, you lucky bastard...seeing Vampire Circus at a drive-in must have been orgasmic.

Hey Bob good to hear from you again! Yeah, Vampire Circus is awesome! Its one of the best ones, so different! Love those scenes with the mirror of life...where those kids pass through! Awesome sequences...why the hell are there no plans for releasing that one to the public? Its so awesome!

I should be released along with Twins of Evil! On a freaking double feature!

Thanks for joining my blog Bobzilla!

Hey Dom, Vampire Lovers is for sale as a double feature with Countess Dracula. Only problem is that Countess Dracula isnt all that good. I actually found it to be incredibly boring.

There is a non-US DVD of 'Vampire Circus' that you can play if you have a region-free player. I got mine for 10 bucks at a garage sale, but basically any super cheap player from a brand you've never heard of probably has a region hack you can find online.

Yeah, a friend of mine got me Twins of Evil, and its the only way I finally got to watch it.

Gotta say, going to some lenghts to get Twins of Evil was defenetly worth it, it was another incredibly satisfying Hammer Vampire film! Loved every second of it. Twin sisters who fall for a satan worshipping vampire? How cool is that?

Highly recommend it. In fact, Ill be reviewing it this week!

Space, you are on a mad, bad Hammer bender! I LOVE IT.

This is my favorite Hammer film so far. I just started doing a Hammer film-a-thon this month and prior to it have never watch any Hammer films. Glad I found your blog, I'll definitely be checking out your reviews. Feel free to stop my and check out some of mine and recommend some good picks!

I LOVE The Vampire Lovers. I was fortunate enough to meet Ingrid Pitt and even in her 60s she was very, very sexy!

all the girls are lovely any red blooded male (or girl) would love them,