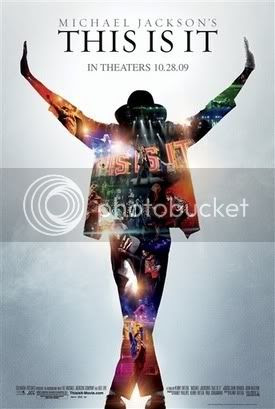 
It was decided by my friends and I that last night was going to be Michael Jackson night. The guy died. The guy was a living legend. And he died while prepping this big ass concert. We decided, last night was going to be a night to remember him. You see, I grew up listening to Michael Jackson, I saw the guy turn into the biggest thing in pop music right before my eyes. Id seen him do a respectable scarecrow in Sidney Lumets The Wiz. Id seen him transform into a spaceship in his own film Moonwalker, which I saw in theaters when it was first released. On the way to the theater, we popped a Michael Jackson cd on the cars audio system. Along the way we talked about his past while singing his songs. I was looking forward to seeing Michael Jackson thrill the world one last time with this new world tour that was to be called This is It. As fate would have it, he didn’t get to entertain his public one last time because of his untimely death, but he did get to give audiences one final jolt of entertainment through this concert film. How was it?

The thing with Michael Jackson’s death is that before it, the words Michael Jackson were synonymous with the words “freak”, and with finding a way to make fun of Jackson and his eccentric lifestyle. After his death, everything changed. He is no longer “Jacko” the guy we love to make fun of, now he is referred to once again as the “King of Pop”. I cant help but think he could have used some of that love back when he was alive. But I guess that’s the nature of being such a huge star. At some point the media just wants to eat you up and spit you out. Which they voraciously did with Michael. But now, that same media that destroyed him is feeding off of his death, which is a sad and hypocritical thing to do. But that’s they way it goes with big artists. Once they are dead, they are appreciated that much more. 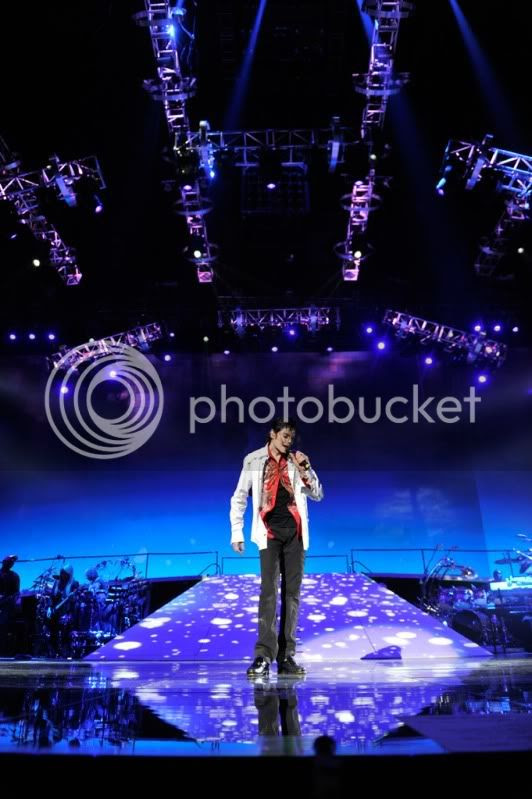 Of course, I recognize that he was an unusual individual and that he was definitely guilty of doing a thing or two that would make people say he was kind of crazy. Like hanging his baby from a balcony. Or reconstructing his whole face to the point where it was falling apart. Or turning himself from black to white. And finally, being accused of pedophilia, which of course was never proven. As far as we know, they guy was simply being targeted by a group of greedy people looking to get a couple of million dollars from him. But I guess we’ll never know. But, aside from all the eccentricities in his life and the wild stories (he sleeps in a cryogenic chamber!) one thing cannot be denied about Michael Jackson and it is that he was one of the greatest performers and entertainers that ever lived. 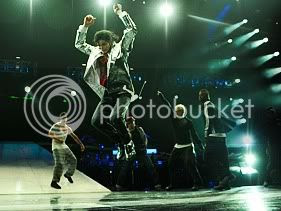 When you saw him up on stage you just knew, this guy really had it. It’s that magic, that sparkle of someone bigger then life. His got that aura of someone who will live on through time. On this concert film, his talent is captured in a very raw fashion. Jackson was primed for a comeback, and he was going to make it a big one, the 'end all be all' of comebacks. It’s why he called it “This Is It!” This film shows us the rehearsals that took place during those long months of pre-production for the concert. You practically get to see every song he was going to sing on the concert, as rehearsed by Jackson, his musicians, his back up singers and his extremely talented dancers. Essentially, you get to see what the show was going to be like. Not the full on 100% version of it, but the 75% version. Still, you definitely get to see that it was going to be a huge spectacle. 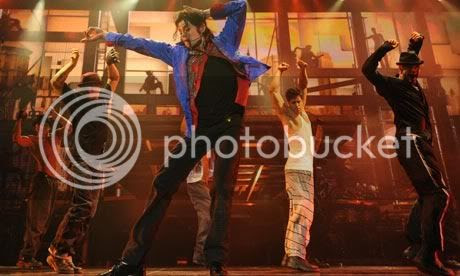 How big was this concert? Well, first there was that long process of choosing the best dancers for the thing, and you get to see just how emotional some of these dancers were because they were getting the chance to dance next to Jackson. Then, you get to see how every song was going to be this huge production number, with special effects, make up effects, even part of the concert was going to be in 3D! Thriller was going to be a show stopper! Michael Jackson and his crew filmed a couple of short films for some of the most important songs. For Thriller, he did this short film filled with cemeteries, ghosts and zombies. Cool part is that the zombies were going to be coming at you in 3-D! And you get to see it on the film, because the fx for the short films were actually finished. 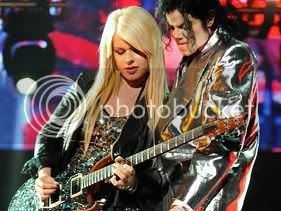 What I enjoyed the most about the whole film was how you could see Jackson at his most vivid. You can see him commanding that stage. When there was something he didn’t like in the show, he lets the crew know in a very gentle yet firm fashion. Yet you can’t get past the notion that Jackson knew exactly what he wanted for every second of that show. There’s one moment where you can see him literally thinking and coming up with how the show was going to be! We can see a couple of clashes, mistakes to which Michael would reply “that’s why we got rehearsals!” He was so respectful while rehearsing; he was never a pompous ass hole. He was always the nice guy, who would tell you what he wanted in the nicest way possible, but rest assured, he would get what he wanted. Make no mistake about it. On this movie you can really appreciate that the place where Jackson was meant to be was on stage. It’s what he was born to do. 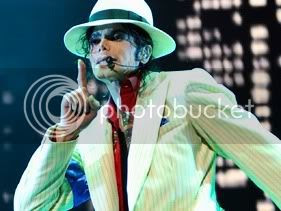 His physical deterioration was evident. By this I don’t mean he wasn’t dancing or singing well. He is not 100% on these rehearsals because as he mentions quite a few times, he was saving his voice for the show, he was saving all his energies and his all, for the big concert, which he was obviously looking forward to. When I say his physical deterioration was evident I’m talking about his face. While seeing this movie you will see clearly how all the facial reconstructions he went through disfigured his face to the point where he no longer looked normal at all. It a sad thing to see, but his talent and his persona, and his energy during the film kind of obliterates this. All I could think while watching him prepare for this show was how talented he was, and what a loss it was for him to have died so soon. I don’t know how I feel about the fact that this movie is making huge amounts of cash, that the cd’s and dvd’s are selling like hot cakes and that Michael Jackson is selling more records now then ever. Some see it as a little morbid, making so much money off of him now that he is dead. On the one hand you can see the whole film as Michael Jacksons swan song. A way to see into who he really was behind the scenes, how his mind worked while preparing these shows. On the other, it’s turned into a huge marketing scheme, selling box office tickets, t-shirts, posters, cd’s, dvd’s you name it, if it has Michael Jackson’s name on it, its selling. But then again, The Beatles keep selling. And so does Elvis. Michael Jackson is now amongst those dead and famous, who will live on through their merchandise and their music. Becoming a part of popular culture.
So yeah, I’m a huge Michael Jackson fan. And not the kind that turned overnight after his death either. This review comes from a true blue Michael Jackson fan who’s been listening to the guy since I was something like 9 or 10 years old when he was just starting out on his own way back in ’83 and ‘84. Though I don’t go around dressing like him or putting on Michael Jackson t-shirts, I do respect the guy’s artistic abilities, his talent to dance like no one else, and his musical legacy. I was singing every song in the theater as I watched this one! And guess what? I wasn’t alone! People were singing his songs, and clapping after some of them were over, as if we were seeing him perform in a concert, which in essence, we were. For the last time. This film was his last will and testament. For those of you who enjoyed his music, videos and films, don’t miss this one! This one is most certainly it!
Rating: 5 out of 5
Posted by Franco Macabro at 11/05/2009 09:29:00 AM

it's good to see the Mondo documentary is alive and well

I just saw the first of those Mondo Cane documentaries the other day, it had some amusing things in it, but I couldnt help but feel that a lot of it was staged.

As far as This Is It, the freakiest thing about it is Michaels messed up without repair face.

I want to see This Is It, but they hiked up the ticket prices for this film. It's $10 a ticket! I'll see it on DVD. I do like most of MJ's music. My favorite album is probably Bad.

Dom: Really? They can do that? Ive never had any theater raise prices of a movie just because its popular, isnt that illegal or something?

The only kind of movie they have raised prices for where I live is 3-D movies which cost 9 dollars a pop as oppposed to 6.50 that they charge for regular films.

They can and did do that. As you know, I'm handicapped, so I usually get in free at the theater. For this flick and some other movie from years ago (don't remember the title), the free pass doesn't apply. Studio's orders.

Your free movie pass is a pretty deal right there! Too bad it didnt apply to this one, but hey, Im sure it will be out on DVD sooner than you think.

Im sure before christmas is here we'll be seeing the DVD release. They just gotta make that christmas money!

L-O-V-E! Just 10 years...as u said, there was lots of things that made him a freak, even in this doc, but still, the best performer ever! great review!