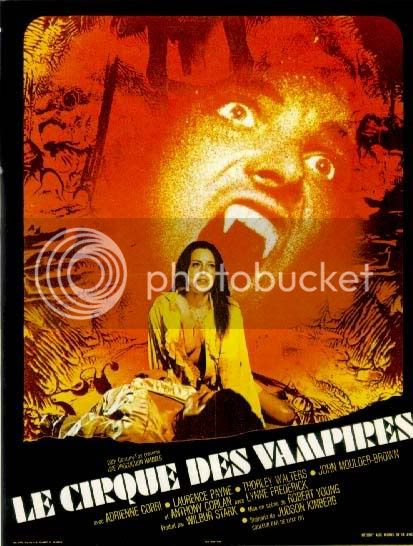 
Vampire Circus is one of those hard to find, elusive Hammer flicks (like Twins of Evil!) that have not yet been oficially released on DVD in the United States. You either find a bootleg of it like I did, or you simply get some foreign release of it and play it on a region free player. Either way, going to some lenghts to get to finally see this one is well worth it. Hammers Studios was on its last legs, yet this did not mean that they were making crappy movies. I find it so strange that many of the last films they made turned out to be the most rewarding films in their whole collection of films! Its a bit obvious that Hammer Studios knew that they had to infuse their films with more of an edge, cause the times, they were a changing. So they added more blood, sex and nudity then any of their previous films. At the same time, these films had faster pace and more sadistic and evil villains. As a result, these last batch of Hammer films turned out to be some of the most offbeat and entertaining of all Hammer films.

In Vampire Circus, the town of Ketl has decided to storm Count Mitterhouse's castle because he is a vampire who has been feeding on the towns young women and children. They decide to take justice into their own hands and rid their town and the rest of the world of Count Mitterhouse. Unfortunately for them, just before he dies Count Mitterhouse sends a curse upon the small town, warning them that the town is going to die and that their children were going to die. Fast forward a couple of decades, and its all coming true. The town is dying of a deadly plague that has spread across the land, town morale is low. Suddenly, amongst all the sadness and death, a curious traveling circus stumbles into town! The circus is called "The Circus of Nights". Suddenly, the people of the town have something to entertain themselves. The Circus of Nights is here to take their minds of all the sadness and depression. They dont have to be so sad anymore! Unfortunately, theres a dark secret that comes along with this mysterious traveling circus. What could it be? Oh yeah, everyone in the circus is a bloodsucker! Will the people of the town realize this before its too late? And exactly why is this circus in town, besides feeding? 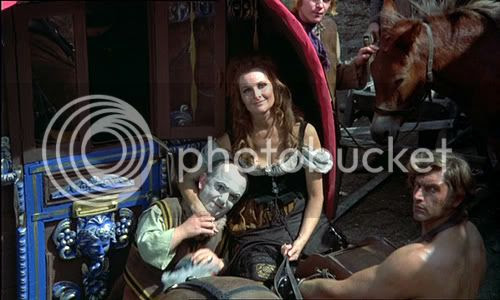 Theres a couple of horror films out there that revolve around the strangeness and surrealism that hovers around the circus atmosphere. Tobe Hoopers Funhouse comes to mind. Usually, in movies of this type, the circus performers take center stage. This is the case with Vampire Circus where all the vampires in the circus got something that makes them special, the villains are the main stars and are by far, more interesting then the villagers. For example, we have the man who can mysteriously transform into a puma! We got the twins who turn into bats! We have the "mirror of life" where if you look into it, you can see what the future has in store for you! We have midget clowns! In other words, we have a whole assortment of freaks. All of whom look forward to entertain you, only so the can suck your blood afterwards! But in reality, all this elements put together, makes for one of Hammers strangest movies. A circus of horror! 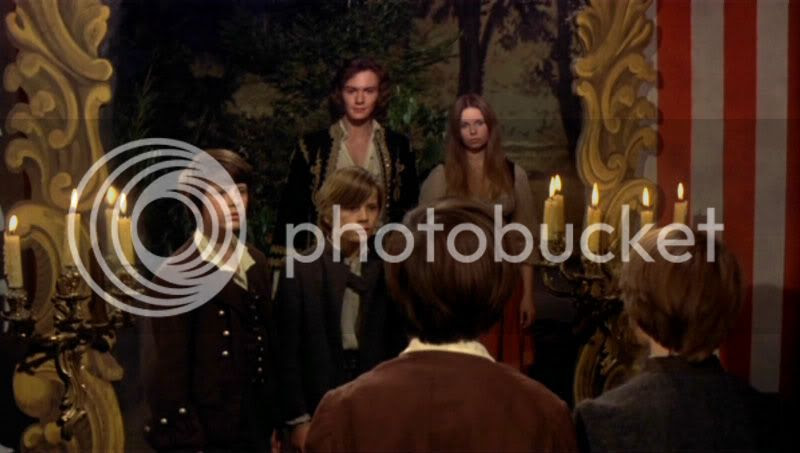 The main villain in this movie, Count Mitterhouse is one of the most viscious vampires in all of Hammers films! In the first ten minutes of the movie, he has already killed a little girl! Before he dies, he curses the whole town! So be on the look out for a mean viscious and cruel vampire. In fact, all the vampires in this film are more evil then usual, they love feeding on the blood of children! By the way, its no secret that the villain has to die at the end of a Hammer movie. I always find it funny how once the villain dies, the movie is instantly over! The End, credits roll. When Count Mitterhouse bites it, its in a very original way, not gonna spoil it for you guys, but its memorable. Never seen that happen in a vampire movie before. Ditto for a vampire who transforms into a puma.

Thats one other thing about this movie, it plays around a lot with vampire lore. Who the hell heard of a vampire who turns into a puma? Or a vampire that needs the blood of various victims to be poured over his dead carcass so he can be resurrected? Or have you ever head of a vampire who can put a curse upon a whole town? Thats the cool thing about these Hammer vampire films, some of them exists outside of the whole Dracula mythology. So they can do whatever the hell they want with vampire lore and nobody can tell them otherwise. I guess it just adds to the bizarre feeling this movie has. The only bad thing I can say about this movie is its main protagonist was a poor choice for a hero, he was too much the pretty boy, with not enough ass kicking virtue in him. He didnt convince me as a guy who would go out there and kick Count Mitterhouse's vampire ass. 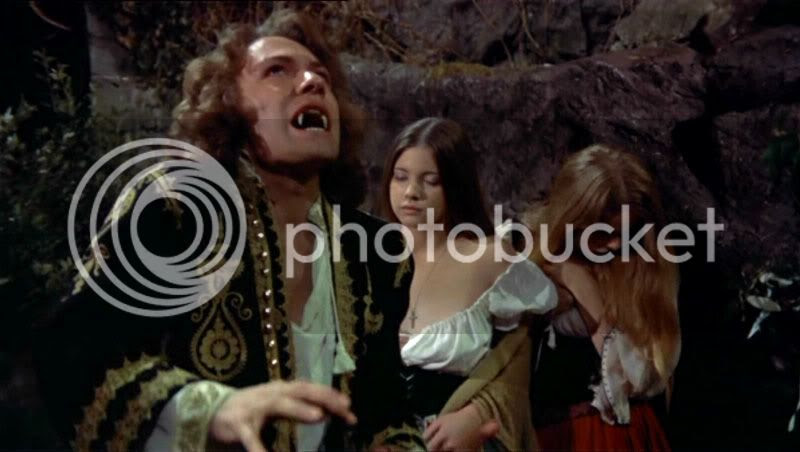 So, in conclusion. Vampire Circus it a film that was fun because its weird freaky carnival feel and its despicable villains. Too bad this film is often times ignored and doesnt get the recognition it deserves. Why has this gem of a vampire movie been left out in the cold? Its been completely ignored! And its so damn entertaining! It certainly is one of the most unique vampire films to come out of Hammers House of Horror, and one that any Vampire/Hammer lover should not miss.
Rating: 4 out of 5 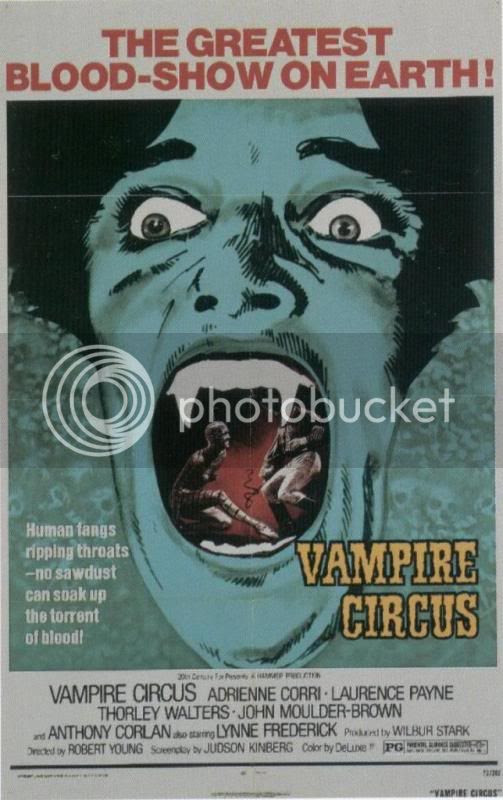 There are definitely some clever and original touches in this film that make it better than it might otherwise be. There's also some definite sloppiness, though. The one thing that killed me when I watched it was the vampires had no problem chasing the female protagonist right into a church, complete with a huge cross hanging there, but other times even improvised crosses make them howl in agony. It wouldn't have surprised me to see a character just make a cross with their fingers and have it work. I suppose it's best not to think too deeply when watching a movie like this.

True, there are sometimes inconsistencies on these films, like for example, Peter Cushings Van Helsing was at one time bitten by a vampire (in Brides of Dracula) yet he sucks the blood out and burns the wound and he is alright! What??!

In Kiss of the Vampire, the vampire cult is killed by a swarm of bats! Thats right, vampires who turn into bats were killed by bats.

Thats when my Jack Burton persona kicks in and I just say what Jack Burton always says at a time like this: "What the hell!"

I may hate vampires, but I love circus and sideshow flicks, so I will have to add this one to my list of "Damn I want to see that but I'll never get to because it isnt on dvd" list.. Where is the Hammer Collection Volume II???

That boxed set was going to be released, but its been delaied for some reason.

They have released three Hammer Adventure Movies under the "Icons of Adventure" name:

Terror of the Tongs (1961)A movie about the Chinese Mafia with a Fu-Manchu like leader played by Christopher Lee.

The Pirates of Blood River (Christopher Lee plays a Pirate!)

The Devil Ship Pirates (1964) (another pirate movie with Christopher Lee)

But dammit, why not release some of those horror classics theyve forgotten about? Ill find out if they are doing anything about this and post more information here.

This was one of the few movies that made me the horror movie fan I am today. Take that how you will. :D

Nutty flick. The strongman cracked me up. On the whole, I enjoyed it, but it's not one of my favorite Hammer films. I prefer the more streamlined stuff from the 50's and 60's.