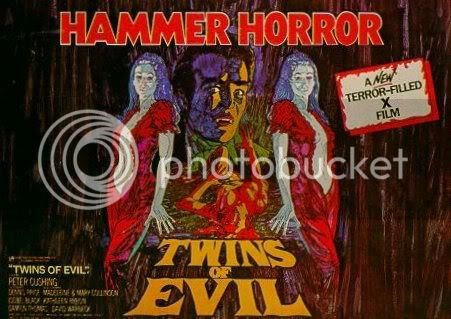 Title: Twins of Evil (1971)
Director: Jhon Hough
Cast: Peter Cushing, Dennis Price, Mary and Madeline Collinson, Damien Thomas
Review:
This Hammer film had managed to elude me for sometime because unfortunately, its NOT on DVD yet! For some unholy reason some studio head somewhere has not done his homework, and as a result, we still dont have a proper DVD release. But thanks to a buddy of mine I finally got a bootleg copy of it. So I finally I got to get a look at Twins of Evil. And Ill be damned if it wasnt one of the coolest vampire flicks Hammer Studios ever produced! 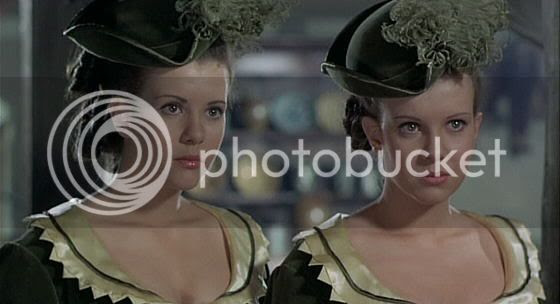 This is the third film in Hammer films "Karnstein" trilogy. This trilogy consisted of The Vampire Lovers, was followed by Lust for a Vampire and ended with the film I will be reviewing today, Twins of Evil. They all deal with the Karnstein family as the vampiric threat in their stories. On this one we get Count Kernstein, a young bachelor who lives on a castle at the top of a hill, as is usually the case with villains in Hammer films. Everyone in town knows he is into witchcraft and devil worship, and they are right. It's all true. This count is really into worshipping Satan! Black Masses! Human sacrifices! Anyhows, Count Karnstein grows bored with charlatans and fakers claiming to be true devil worshipers. So on a desperate attempt to really get things moving, Count Kernstein decides to summon old Beelzebub himself into his home by sacraficing a virgin! This makes for a fantastic scene if there ever was one! The scene reeks of satanic blasphemy! The virgins blood doesnt make Satan show up...but it does awaken the corpse of Mircalla Karnstein! An old vampire vixen who's laid dormant for years! When Mircalle wakes up, she in turn transforms the young Count into a vampire. Shortly after that, two innocent yet mischievous twin sisters decide to wonder into the castle...will they fall for Count Kernsteins charms? Will these twin sisters be turned to the dark side to worship the devil? 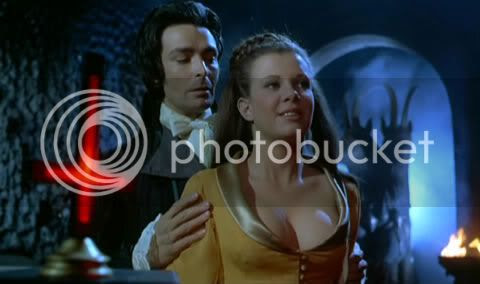 The first film in the Karnstein trilogy was Vampire Lovers wich starred Ingrid Pitt as Countess Mircalla Karnstein. And even though the beautiful Ingrid Pitt, who wows us in Vampire Lovers does not reprise her role in this sequel, Twins of Evil is an excellent example of what a really great Hammer vampire film should be like. A great story, great atmosphere, lots of blood and lots of nudity. Oh and lets not forget the girl on girl action. Lust for a Vampire, the second entry in Hammers Karnstein trilogy I have yet to see, so I cant comment much on that one. But from what I hear, its one of the weakest in the trilogy. But with Twins of Evil Hammer studios out did themselves once again, as if they were trying to compensate for making a weak film with Lust for a Vampire. As I watched Twins of Evil, I couldnt believe how good this movie was turning out to be and I realized what a crime it is that its not yet available on DVD. Last info I discovered about this getting a U.S. DVD release, Fox bought off most of MGM's library (cause MGM is actually going bankrupt if you can believe it!) and well, it looks like this films DVD release is still very much uncertain, at least in the U.S. 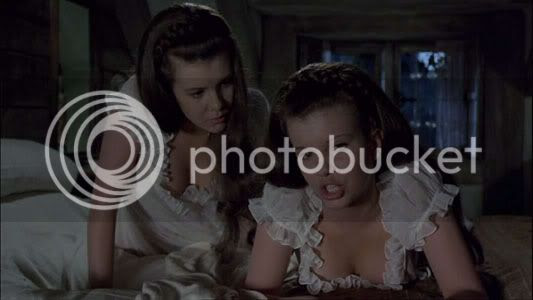 One is the good sister, the other is the bad.
I was surprised to see that this film, had non of the usual Hammer directors, writers or producers. Theres no Terrence Fisher or Freddy Francis, or Roy Ward Baker directing...no John Elder writing the script. It was weird not to see any familiar names (save for Peter Cushing) being involved on this Hammer production. Maybe thats why this film feels like a breath of fresh air in certain occasions. Though this still is a Hammer film and we do get a lot of traditional Hammer situations...this one did things just a little more intensely. Its a very viscious film for a Hammer film, with a slightly edgier tone to it. More graphic, more satanic. Which of course in my opinion makes for a better film. This film in particular was directed by John Hough, who would go on to direct the excellent Legend of Hell House. He was also responsible for a horror film called Incubus (1982). He also made the Witch Mountain movies and the haunted house film The Watcher in the Woods (1980) for Disney Pictures. He also directed Howling IV: The Original Nightmare. But we dont need to get into that. 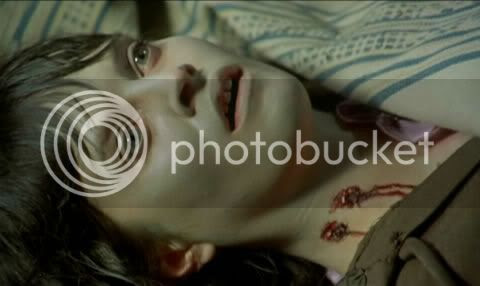 One of the things that stood out for me on this film was the sets. Usually on a Hammer film the sets will seem familiar some how, because many times they just reused sets used on previous films. On this one, the sets had a very unique look to them. Specially Count Kernsteins castle. That castle looked great on the inside! Its got a lot of skulls, Gargoyles and statues with horns coming out of them, it just made everything all the more gothic. Also the way the interior of the castle was lit, helped everything look all the more spookier. They later reused these sets for filming Vampire Circus. 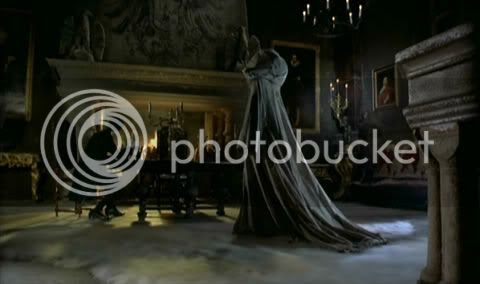 The comes the acting. Peter Cushing is known for elevating Hammer films with his acting, in this film, his character is one Gustav Weil, witch killer! Cushing plays a priest, hunting down witches and warlocks and burning them at the stake! Part of that whole inquisition deal where a lot of innocent people were burned at the stake and tortured if they werent catholics. Cushing plays the witchfinder, his character in Twins of Evil is very similar to that of Vincent Price's in Cry of the Banshee or The Conqueror Worm, constantly looking for witches to burn. Great thing about this character is that apart from Cushings great performance, he is a very ambiguous character. He is often times seen as the villain of the film because of his habit of burning beautiful girls in account of religious fanatism. But at the same time he is seen as the heroe who is after Count Kernstein. So theres a duality to his role on this one. A detail that might have added to the somberness of Cushings character is the fact that his wife had very recently died right before he began production of this film, so during the filming of Twins of Evil, Peter Cushing was an actor in pain. 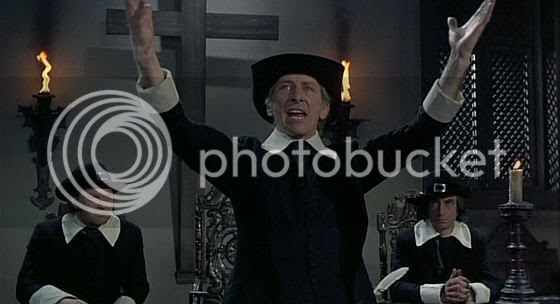 Still, I like how the film explores these themes, of how at one time people were burned if they werent catholics. Shinning a light on those dark times when you had to be a catholic, or else you were in cahoots with Satan! There is a scene that I really loved where Peter Cushings withfinder character almost burns a completely innocent person, and realizes it just before they burn the person alive! In this way, the film comments on how this sort of thing happened during those dark days of the inquisition. 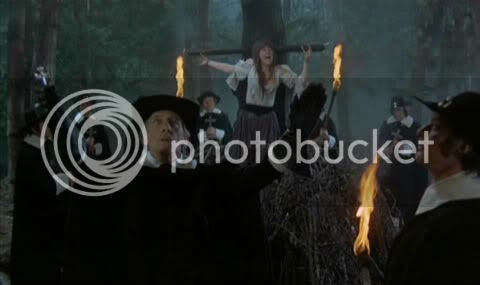 As for the titular twins, well they do a good job of looking sexy as heck. These two actresses actually appeared in a 1970s issue of playboy! This film was actually marketed as a new X rated horror film from Hammer Studios! The sisters reveal their respective cleavages more then once during the film. Though nudity was not common in Hammer films of the past, after they did their first use of it in Vampire Lovers, nudity was common in Hammer films. I liked how one sister was the good girl, while the other was the rebelious one, looking to get into trouble all the time. I found it interesting how the "evil" twin was actually lured into the dark side because of how she hated her religious fanatic uncle. In a way, religious fanatism made her run into the clutches of something even more evil. Interesting situation they present us with there. The rebellious sister runs right into the vampires arms! Then she has to deal with the ambiguous nature of being a vampire, and trying not feed on her own sister! Kind of like the same situation we saw a couple years later in Joel Schumacher's The Lost Boys. 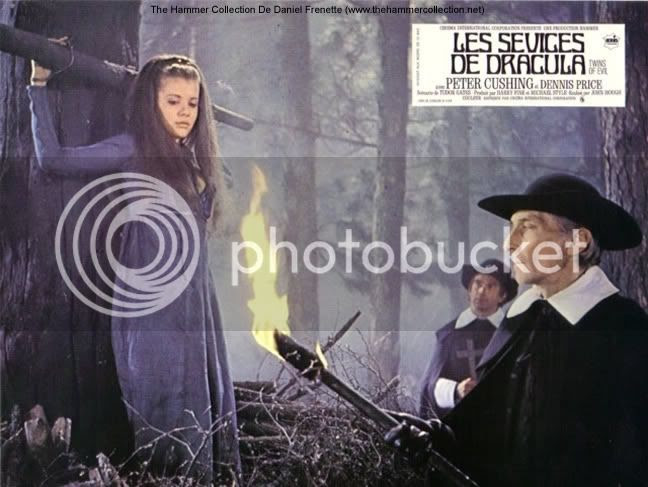 Burning innocents was something catholics enjoyed doing during those days.
Another thing I really enjoyed about this film was its fast pace. Lets face it sometimes Hammer films can get a little slow...specially the earlier ones. But this film comes to us from a new school of Hammer directors and writers, who moved their story telling at a faster pace. The ending is a rollercoaster ride of thrills when compared to other Hammer films. Another cool little tidbit about this film: the vampires have huuge fangs! When they reveal their vampire fangs its awesome. Kind of reminded me of the vampires in Vampire Circus. So what we got here is actually a Hammer vampire film that comes from a new generation of Hammer directors, striving to move things quicker, and striving to give their films a new edge. 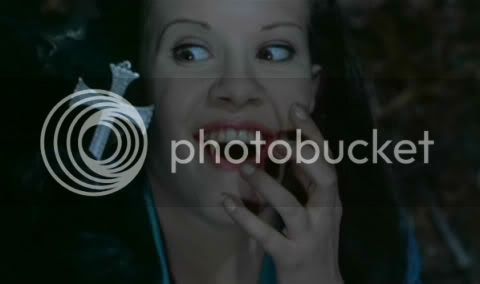 In conclusion, I can say that this film quickly became one of my favorite Hammer vampire films. Its right up there with the best Hammer films. Im surprised to see that most of my favorite Hammer vampire films ended up being the most offbeat ones! Or the ones that have not yet made it to DVD. I love these flicks because they are films that were made many years after Hammer had already firmly established itself as a horror studio, so these last films learned from the mistakes of all the previous Hammer efforts. Hence the faster plots, abundant nudity and blood. Try to get your hands on this flick if you get a chance, its well worth the effort!
Rating: 5 out of 5 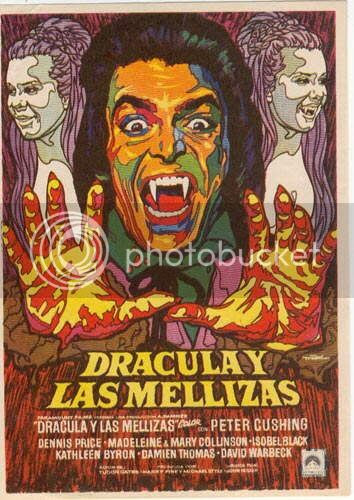 this also gives me boners *giggle*

Another one I need to see. Why haven't I seen these movies?

Trust me Dom, this one will not let you down!

A 5/5 and there is STILL no DVD release?? I only first heard of this one in Hammer Galmour, and I have been wanting to see it ever since! But did I catch a diss on one of my favorite guilty pleasure werewolf movies slipped in there lol.. I LOVE HOWLING 4 in all of its terrible glory, so if Ive seen Hough at his worst I cant wait to see him at his best!

Hey Carl, Howling IV might have some cheese value and be entertaining in that way, but it just doesnt stand up to when he made films like Legend of Hell House for example, which I consider a pretty decent haunted house film.

Ive yet to see Incubus (1980), Im intrigued by it! Sounds like something similar to The Entity.

Great review, I'll be checking this one out next, finished watching Lust For A Vampire a day or so ago. I don't think it was as bad as a lot of people think, definitely a little corny, but I had a lot of fun with it. I have heard that some people actaully like this 3rd film better than the 1st so I am looking forward to seeing it, supposedly this one is really a prequel to all the films, since Count is already a Vampire in the other films.