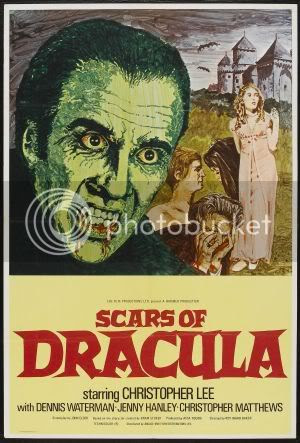 This is the fifth Dracula film from Hammer Studios starring Christopher Lee as Dracula, it comes to us from director Roy Ward Baker. To those of you who have not seen this flick or are just discovering Hammer films, go and search this one out; it’s a very enjoyable and creepy Dracula tale that will please fans of Dracula films and gore alike! Ive seen some of the best hammer Dracula films and I have seen some of the worst, and all I can say is that this one ranks way up there as a highly enjoyable Dracula story. Some critics and even Christopher Lee himself criticize this one for being a weak entry into the series. Me? I thought it was a kick ass vampire movie, old school style of course, but mega fun non the less. The only reason for it being called a “weak” entry is because it has more violence then other Hammer films. This in my opinion does not make it weak, if anything it made it a cooler film to watch. It made it more of a horror film. 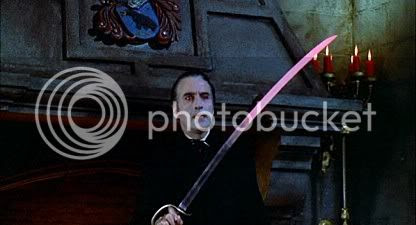 On this film, the towns people are sick and tired of Count Dracula so they decide to takes matters into their own hands and burn down the bastards castle! So they hide all their sons and daughters and wives inside of the Church and run of to the castle to set it on fire! After they do this, Dracula gets infuriated and sends a bunch of his vampire bats to kill every last woman and child thats hiding in the church! Meanwhile, a young womanizer (and all around libertine) named Paul is escaping the local authorities for having his way with the burgomasters daughter. While escaping the local authorities, he ends up in Draculas castle; after that night, no one hears from him ever again. After his lengthy dissapearance, his brother Simon decides to go and look for him with his girlfriend Sarah. What they encounter is Count Dracula himself who of course first offers them his hospitality, then proceeds to try and suck their blood! Pretty soon, both Simon and Sara are running around Draculas labyrinthian castle looking for Paul and end up encountering the true nature of the Prince of Darkness himself! 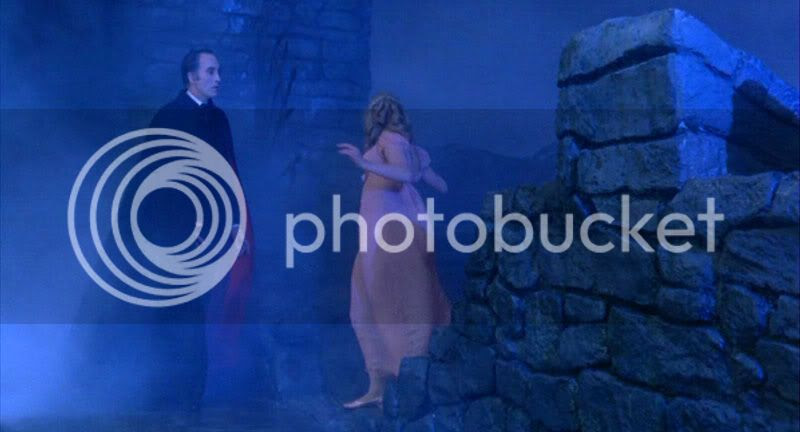 In Scars of Dracula we get reintroduced to Klove, a character that was also presented in Dracula: Prince of Darkness. He plays the role of Draculas day time protector. On this film Klove is a bit more like an animal, like a disfigured Hunchback of Notre Dame as opposed to how he is presented to us in Dracula Prince of Darkness, where he is just this regular dude who serves Dracula. On this film Klove brings a different twist to the story because he falls in love wih Sarah. So the issue on this movie is, will Klove be faithful to Dracula? Or will he faithful to his heart? Klove is Draculas servant, so on this one he is at war with his inner self because he' s also secretly obsessed with Sarah. So we have that whole will love conquer over evil thing going on with this one. 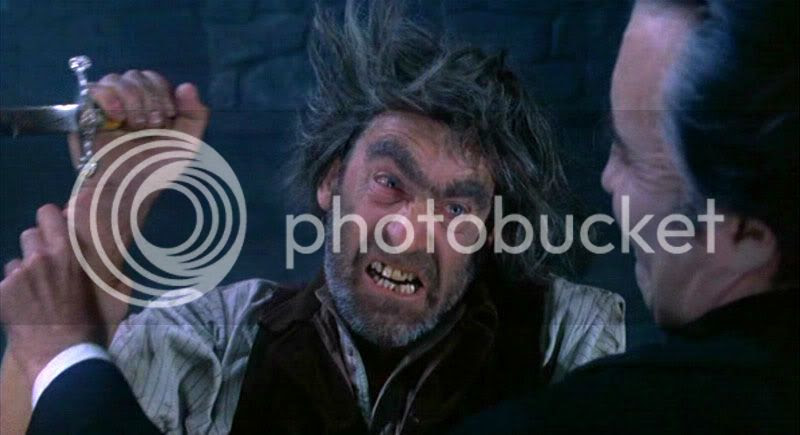 Its always a pleasure to see Christopher Lee play Dracula in these old Hammer films, no matter how reluctant he was to being typecast as the age old vampire, he always came back to the role that made him famous. On Scars of Dracula, the Prince of Darkness is a bit more evil than your usual Hammer Dracula film, and this is really one of the reasons why I like this one so much. On Scars of Dracula, the count is sadistic and violent! For example in one scene he uses daggers and swords to express his fury. Theres this really cool scene in which Dracula uses a burning hot sword to punish Klove with! All these touches simply make Dracula more evil for me, as opposed to how he was portrayed in Dracula Has Risen from the Grave, where he just sends somebody to do his bidding, or other Hammer films where he is simply reduced to throwing furniture at his enemies, which is something I always thought was kind of dumb of these Hammer films. Hey, the good guys are following Dracula, what should he do? Oh yeah! Have him throw that candle stick at them! Or have him throw that chair! But not on Scars of Dracula! On this film Dracula is all about using weapons, which is something kind of different in these films. And theres also a wink at Vlad the Impaler for in one scene Dracula actually impales one of his adversaries. 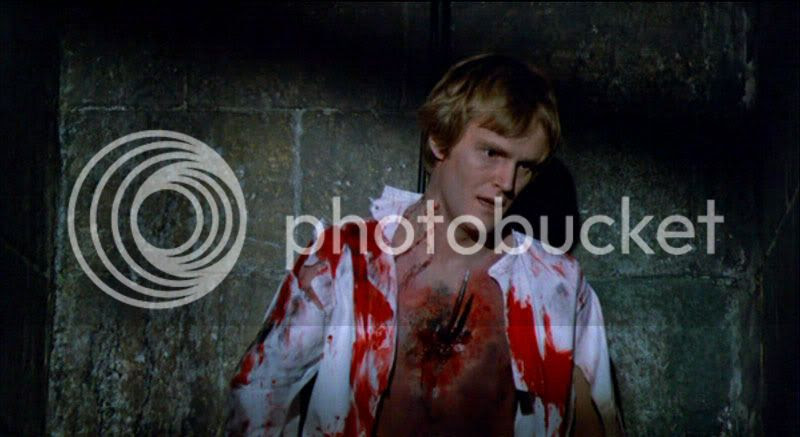 Dracula is more of an Impaler on Scars of Dracula

Another thing that we get a lot of in this film is Dracula using his giant vampire bats to get to his enemies. Theres that scene where he sends a legion of bats to kill most of the towns people that are hiding from him inside of a church. And theres this one really cool scene in which Dracula is trying to bite Sarah but cant because she is wearing a crucifix! So Dracula sends one of his bats to rip the crucifix from her chest! Of course this also works as a way to focus on the actresses breasts, but such is the nature of these films. Dracula always goes for the hottest babes! 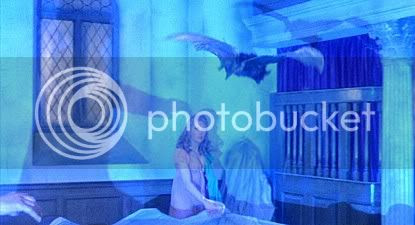 Theres more giant vampire bats on this Dracula film then on any other Hammer Dracula film!

These movies always tried to pay homage to Bram Stokers novel in one way or another. The films are never a direct adaptation of the book, but in between their story lines they will add moments that come directly out of Bram Stokers book. For example in Prince of Darkness, Dracula cuts his chest so that one of his victims can suck blood from it. That comes directly from the book. On this one, we get a scene in which we see Dracula crawling on the walls. This comes directly out of the Bramstokers novel, so I found it amusing. This was the first Dracula movie to show this! Another film that did this was John Badham's version of Dracula were Frank Langella does the scaling up the walls thing. 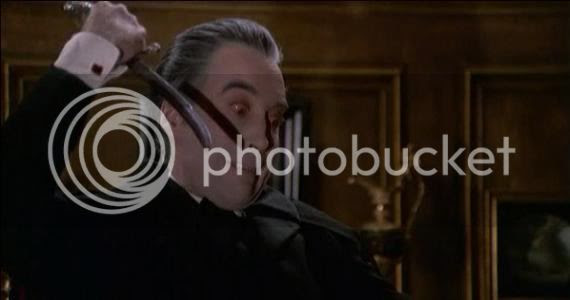 Dracula is more sadistic and violent on Scars of Dracula

After seeing this film, I see how other films have been inspired by it. For example, Draculas demise on Scars of Dracula, served as the the inspiration for Jerry Dandridges fiery death sequence in Tom Holland's 80's vampire film Fright Night (1985). Speaking of which, theres a scene in Fright Night where Charlie is watching TV and Scars of Dracula is playing on it! The scene we see is the one that I described earlier, with the giant vampire bat trying to take away a crucifix from Sarahs neck. It seems to me that theres a little bit of all these Hammer films in Fright Night. 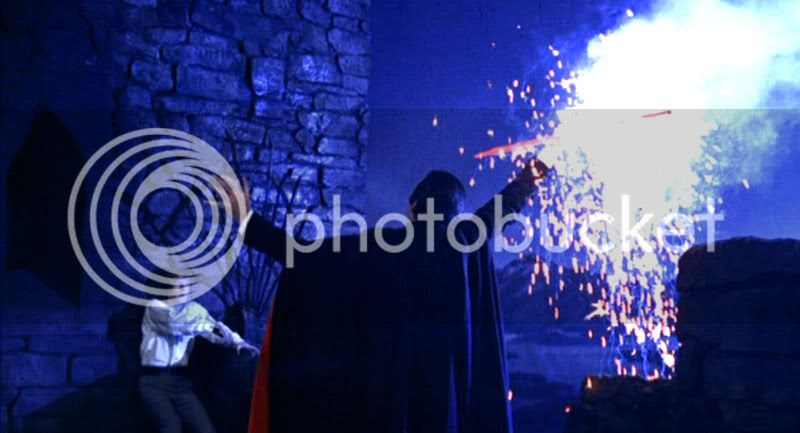 This film comes to us from another one of Hammers best directors Roy Ward Baker, who was responsible for some of Hammers most unorthodox films. They always broke the mold somehow, Roy Ward Baker was very much in favor of breaking with that old Hammer formula of vampire films and made his films just a little bit different. On this one Dracula is more violent then other films. Roy Ward Bakers other Hammer films show that knack for breaking the mold: Vampire Lovers for example had lesbian vampires falling in love with each other! The Legend of the 7 Golden Vampires has count Dracula move to China and take the form of a Chinese Monk! So he was always looking to do the most off beat films, and I have to tell you, Bakers films always ended being the most entertaining of the Hammer films. They had all the usual elements we could except from a Hammer film, but there was always something that set them apart. 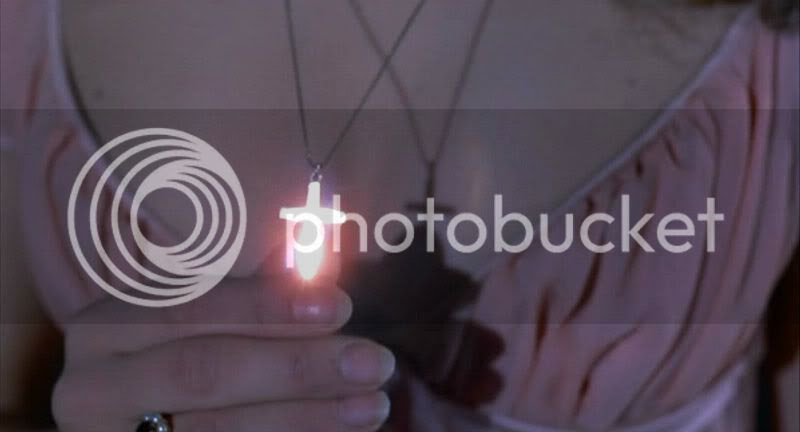 Finally, I think that anyone fond of Dracula films, and specially Hammer films will find this film highly enjoyable, because of Christopher Lees evil performance, the films high level of atmosphere, the gothic sets and the high blood quotent. For a Hammer film anyways. Don’t go expecting a huge bloodbath, by todays standards its tame, but by Hammer films standards up to that time, its got lots of the red stuff. Expect a fun ride into gothic atmospheric horror. 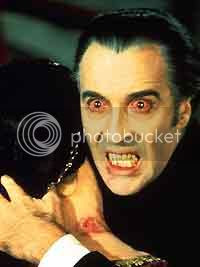 Franc! I missed you, man! You have a great blog. I'll try to leave comments when I can.

Scars of Dracula is a great flick. I'd like to review a Hammer production before the end of the month. I remember all of our Hammer talks. Good times!

Hey Dom! Thanks for the nice words dude, havent heard of you in a while, but Im glad youre still reviewing movies!

I do remember our Hammer movie discussions! I remember we were on a roll, watching every Hammer movie we could get our hands on, you still got that copy of Vampire Circus I sent ya? God, I should have never given it to ya! I remember I swaped it for a copy of Tobe Hoopers Eaten Alive, which I had not seen yet at that point.

Vampire Circus still hasnt been released on DVD, and its one of the coolest Hammer movies ever! And neither has Twins of Evil for that matter, another fine Hammer Vampire film.

Left a comment on your Sonic Boom review, check it out!

The Kiss comment isn't showing up for some reason, but I did see the Trick 'r Treat comment. Which reminds me, I need to get to work!

Dude, how many friggin Hammer Dracula films have I missed? I thought I had seen the majority.. I will add this one to the ol' wishlist immediately, thanks for another great Hammer review man!

Hey Carl, no problem dude, there are quite a few Hammer films that have not been released on DVD here in the states. Two of the ones that I NEED to have in my collection, and that thankfully Ive had a chance to see, thanks for some savory movie buff connections.

The films Im talking about are Twins of Evil and Vampire Circus, love the hell out of both of them, but for some reason theyve been held back.

Man, a double feature DVD with these two movies would be so freaking awesome. One can dream I guess, but these films do eventually make it out on DVD. I mean look at that recent Hammer Horror Classics collection, when that came out I wet my pants cause it had so many Hammer films that I had not yet seen like Brides of Dracula and Curse of the Werewolf. It even had some obscure choices like Nightmare and Paranoiac, both excellent Hithcockian films.

Hey, Ill keep the Hammer reviews coming man, theres still some good ones left for me to review!