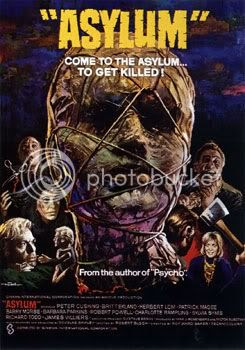 Title: Asylum (1972)
Director: Roy Ward Baker
Starring: Peter Cushing
Review:
Hammer Studios wasn’t the only English film studio wholeheartedly dedicated to making horror films, there was also a studio called Amicus Productions. Now, though these two studios often times shared directors, crew and actors, Amicus films were known for doing one thing: making anthology films! That’s right, they didn’t just do a film with one story, they did one film which told four and sometimes five stories. George Romero’s Creepshow (1982) and John Harrison’s Tales from the Darkside: The Movie (1990) are similar in this way. So was Cat’s Eye (1985). Amicus did this kind of film with almost all of their productions. There most famous ones being Tales from the Crypt (1972), Vault of Horror (1973), The House that Dripped Blood (1970), And Now the Screaming Starts! (1973) and Dr. Terror’s House of Horror’s (1965). The one I will be reviewing today was called Asylum. How was it? 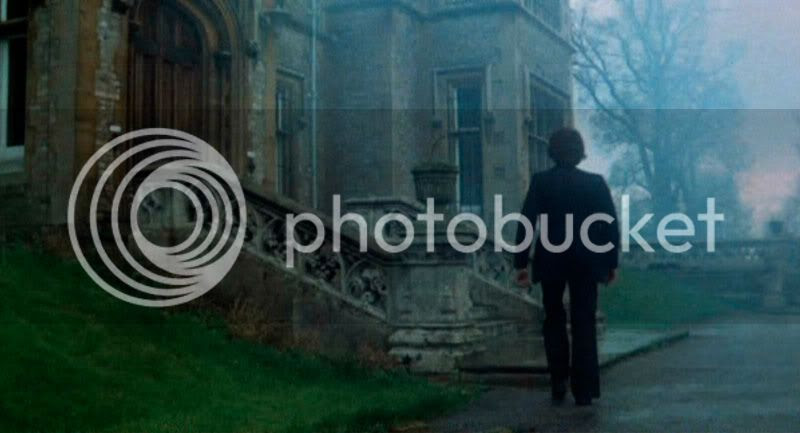 The titular Asylum
Well, the wrap around story on this one is about a psychiatrist called Dr. Martin who is arriving at an insane Asylum because he is trying to get a job there as the new head doctor since the previous head doctor, one Dr. B. Starr now forms part of the crazies of the institution! This asylum is a place for the “incurably insane”, and its in the middle of nowhere England. On his first meeting with the man in charge of the asylum he is made a deal. In order to prove his abilities as a psychiatrist, Dr. Martin has to go patient by patient, room by room interviewing each patient to see if he can identify who use to be the asylums previous head doctor, Dr. B Starr. So that’s how the movie begins. As Dr. Martin begins to visit each patient, we get a different story. 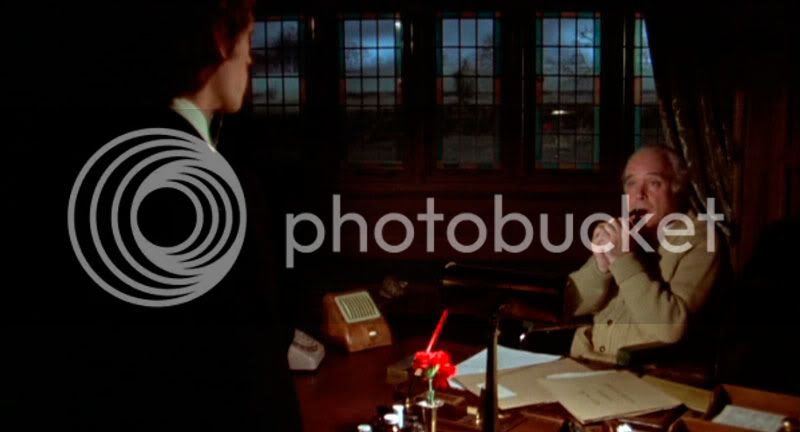 The first story is called “Frozen Fear” and it’s about this woman named Bonnie who is having an affair with a married man named Martin. Martin is married to Ruth, but he is extremely unhappy with her. They no longer love each other. To top things off, Ruth has just started getting herself into voodoo, and she wears a magic bracelet and all that. Well, the day comes when Bonnie and Martin decide to finally kill Ruth. Will they kill her? And if they do, will she stay dead? This story was pretty cool, and it’s probably the best of the bunch. I don’t understand why they didn’t decide to leave this one for last, cause usually they save the best for last in anthology films. But I guess they wanted to open with a bang, so they gave us this one first. This is the story that’s responsible for the illustration on the poster, with the chopped off head wrapped in a paper bag. 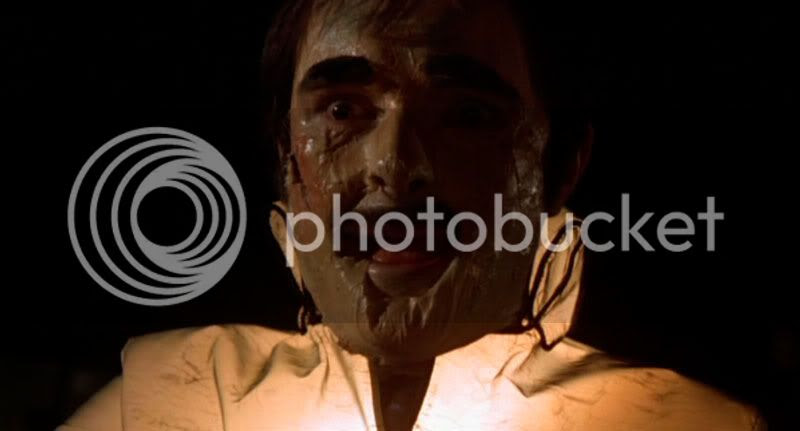 The second story is called “The Weird Tailor” and it stars Hammer star Peter Cushing, who jumped the fence over to Amicus Productions for this one. Jumping from Hammer to Amicus was something he did yet again for another Amicus production called Tales from the Crypt. And many Hammer actors did the same, like Christopher Lee for example, who appears in Dr. Terror’s House of Horror. Sadly, Cushing is a part of the worst of all the stories, but heck, its not that bad. This story is about a tailor called Bruno, who is one day visited by a mysterious gentleman, called Mr. Smith. Mr. Smith commissions Bruno to make a very expensive suit made of a special fabric that he himself will provide. Bruno is about to be evicted from his shop so he says “sure, Ill do it!” When the suit is done, its true purpose is revealed. 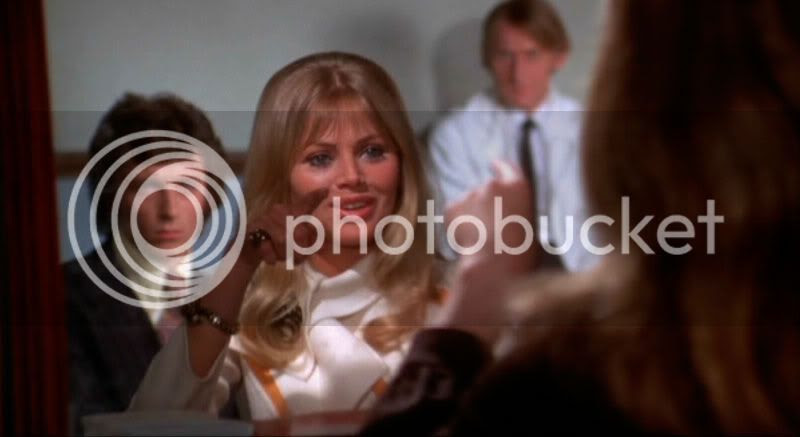 The third story is called “Lucy comes to Stay” in which we meet this woman named Barbara who just been released from an insane asylum. She is going back to her home with her brother, who is trying to help her put her life back on track. You see, Barbara had been doing heavy drugs and was constantly talking to an imaginary friend called Lucy. But apparently that’s all over and Barbara is ready to get back to living a normal life. Unfortunately, she feels oppressed by her brother, who is taking care of her almost as if he was her father. So, one night, Lucy reappears! What horrors will Lucy and Barbara commit together in order to escape the oppressive environment? 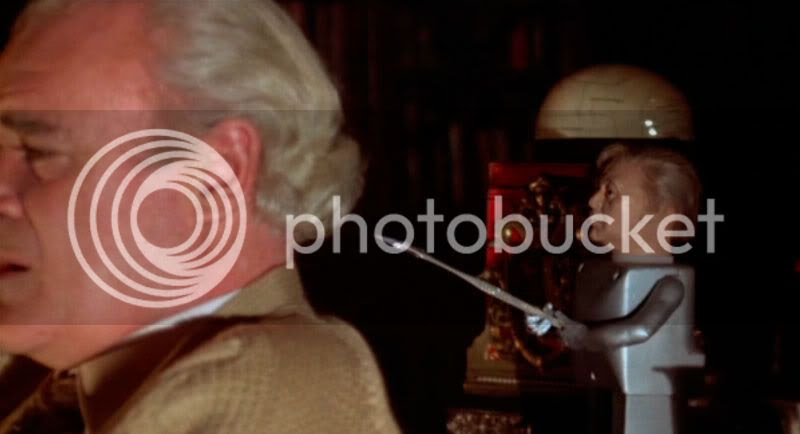 The final story is called “Mannequins of Horror” and on this one, we meet Dr. Byron; a crazed mad man of a doctor who builds these little robots and collects them in a cupboard. One of the robots has Dr. Byron’s likeness and he tells Dr. Martin that he is experimenting with transferring his consciousness onto the little robot. He even tells Dr. Martin that the robots has all its internal organs and everything. It even has a little brain inside of it! Dr. Martin dismisses him as totally insane and leaves. Soon after, Dr. Byron succeeds in transferring his consciousness onto the robot! The robot walks out of the room! Will Dr. Byrons diabolical escape plan come to fruition? Hammer veteran director Roy Ward Baker (The Vampire Lovers, Scars of Dracula) was in charge of directing duties for this one. He had some inspired moments in it, like when Dr. Martin is one his way to the asylums rooms and stops to look at some pictures that are up on the wall of different morbid medical practices done through the ages. The dvd has interviews with Roy Ward Baker and the producer and founder of Amicus Productions, recalling the days when everything got started. Baker compares what it was like to work with Amicus vs. working with Hammer. This dvd extra is worth the price of admission cause you also get to see and hear another famous Hammer director: Freddie Francis. I worship these guys cause of the movies they made when they were young, and found it extremely interesting to hear them talking about their films after all these years. Asylum was written by Robert Bloch, better known for having written Alfred Hitchcocks Psycho.
So there you have it, synopsis for all the four stories in the film, but you’ll have to watch them in order to know how they turn out. This movie was fun, but I couldn’t help thinking that it could have been better. As if it is, the best thing about the film is the music, which pretty much makes the film more exciting then it really is. Asylum does have a very dark tone to it, especially when it comes to the resolution of its stories, so be on the look out for that. It’s got a nihilistic tone to it. I’m looking forward to seeing more Amicus Productions films. I will be reviewing them soon, so keep an eye for them!
Rating: 3 out of 5 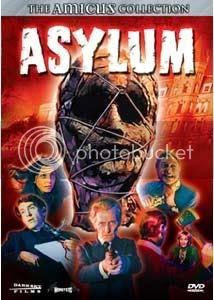 I recently rewatched Asylum. It's certainly enjoyable, but it's not the best Amicus anthology. In my book, that honor goes to The House That Dripped Blood. Tales From the Crypt is a close runner-up. They're all fun to watch.

There is an Amicus box set in the UK, but here in the states, we're still waiting for a few of the titles to hit DVD. Are you going to review other Amicus features?

Sure am! Up next is Tales from the Crypt + Vault of Horror. Ill try and check out Dr. Terror's House of Horror's as well. Ill keep posting as I watch em.

But the one Im really dying to see is actually And Now the Screaming Starts! Im really interested in that one because I saw the previews for it on the Asylum DVD and it looks like it could be the best of the bunch!

Its available I think on an Amicus boxed set, along with The Beast Must Die and Asylum! I need that boxed set!

I agree with you: the framing narrative and the first story are definitely the best things about the film. The story with the mannequins treads a fine line between ludicrous and creepy. The scene where the tiny doll is creeping up on the guy, about to stab him in the back of the neck ... I laughed like hell first time I saw that, then had nightmares about it!

I seem to remember 'And Now the Screaming Starts' as one of the few - perhaps the only - non-anthology Amicus film, but I might be confusing it with another film. If I remember right, it's a period drama set in a large manor house and a young Stephanie Beecham stars in it.

A lot of the Amicus anthology films were hit and miss, but that's true of most anthologies. For my money, the two best anthology films are 'Dead of Night' (bizarrely produced by Ealing Studios) and the Japanese film 'Kwaidan'.

'Dead of Night' gets it right and saves the creepiest film - about a ventriloquist (played by Michael Redgrave) possessed by his dummy - for last. The framing story is also very good in this film and suggests that the characters are trapped in an endlessly repeating cycle.

Hey Neil, thanks a lot for that suggestion, I will add Dead of Night to my must watch list!

I love to get a good recommendation!

Kwaidan will be reviewed soon! But Andrei Tarkovskys Nostalgia wasnt available on Netflix...bummer. I will have to find other means to watch it.

As for Asylum, the story about the little robot was a little goofy. Specially because the little robot looked like one of those toy robots I used to have as a kid. You know the kind that walked just like that and said something in a robotic voice like "Take me to your leader", I was watching that movie with some friends of mine and one thought it was silly, the other found it creepy, so I guess that story walks a fine line between the two.

Amicus also made another non anthology film called "The Beast Must Die!" about a group of people that meet on a mansion, and one of them is a werewolf! If I remember correctly, the film actually stops and gives you sometime to try and guess who the werewolf is! It also stars Peter Cushing.

I love the Amicus shorts, but I havent made my way to this one yet, still on the good ol wishlists =D

Glad to hear it isnt a bare bones release, Id love to see the special features even if the film is just average. Dont forget to grab THE HOUSE THAT DRIPPED BLOOD as well Franco!

House that Dripped Blood is next on my Amicus films marathon, Ive got my eye on an Amicus boxed set which includes And now the Screaming Starts which looks reallyl awesome, I should be reviewing them soon! Im gonna take on Amicus films same way as I took on Hammer films, with movie reviewing vengeance!

Keep an eye out for those reviews Carl! By the way, thanks for reading and commenting on my blog man! Thanks to everybody actually!

I think Im going to drop Asylum as a stand alone and pick it up in the box set as well, cant go wrong with anything from Hammer or Amicus.

No thanks needed man, you dish out the goods and we will always come back for seconds

I`d rather watch "Asylum" than "The Kings Speech" anyday, todays British films are a laughable pathetic joke in comparison to the magic of Cushing and Lee from 40 or 50 years ago.