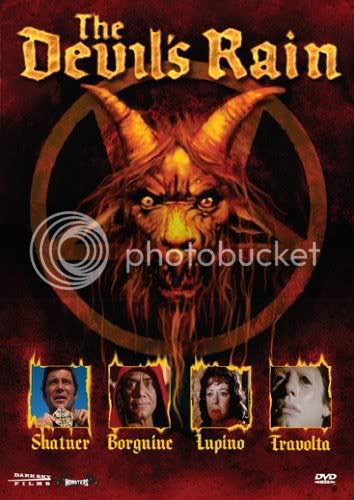 Title: The Devils Rain (1975)
Director: Robert Fuest
Cast: Ernest Borgnine, Tom Skerrit, William Shatner, John Travolta
Review:
When it comes to Satan worshipping films, very few of them achieve a level of believability. Most of the time they come of as silly, corny, or just plain laughable. Recently I had the opportunity of seeing Hammer Films To the Devil...a Daughter, and honestly, most of the time it was a laugh fest to me. It’s very rare for these films to come of as serious or scary. I’ve yet to see Ken Russell’s The Devils, but it sounds like a promising Satan Worshipping film. I’ve heard some good things about that one. Of the rare films that deal with this subject matter only a handful of them are good. Roman Polanski’s seems to be one of the few directors to understand how to make these kinds of films. His two Satanism films, The Ninth Gate (1999) and Rosemary’s Baby (1968) are proof of this. The Omen and its sequels are decent.

Run! The Christians are here! And they've brought William Shatner with them!
The Devils Rain caught my attention for various reasons. One of them was that it was one of John Travolta’s first performances ever. Another was that William Shatner (aka Captain Kirk) was in it. But these weren’t the big draws for me with this movie. What really grabbed me was that they used the "high priest of the church of Satan" (a.k.a. Anton Lavey) as a technical advisor for the film. That fact really peeked my curiosity for this film. Not because Im interested in Satanism or anything like that (I actually believe its one big joke!) but because I wanted to see what Anton Lavey, the founder of the “Church of Satan” could conjure up. Shouldn’t the high priest of Satan have a clear idea of what Satan is supposed to be like? Would he make us crap in our pants with a real vision of what Satan is like? Apparently not. Apparently the guy is full of shit. Apparently, he has a very cartoonish notion of what Satan is supposed to be like! If Ernest Borgnine with a gotee is what Satan is supposed to be like…then hell is one funny place! It’s a riot! Which just proves what I have always thought about religious leaders. They know nothing about what they preach!

Moving on, I can’t say Anton Lavey is the only guy to blame, for who is more responsible for what appears up on the movie screen then the films director? In this case, Robert Fuest was the man behind the camera. He had directed previous black horror comedies like The Abominable Dr. Phibes (1971)and Dr. Phibes Rises Again (1972). So it comes as no surprise that The Devils Rain came off as being a complete laugh riot as opposed to being a serious horror film about Satanism. This film received scathing reviews from critics everywhere destroying forever Robert Fuest’s directorial carreer. He ended up doing mostly tv work after this film was over with.

The story for The Devil’s Rain concerns a satanic cult led by a man named Corbis, played by Ernest Borgnine. William Shatner’s mom and dad have turned into devil worshippers! And Shatner wants to rescue them! Good news is that William Shatner’s dad betrays the Satanists and hands Shatner a magical book containing the names of all of those who have sold their souls to the Devil! Now Shatner holds the book! Corbis needs the book back in order to send the souls of all his followers to hell. Unfortunately, William Shatner has the book and he doesn’t want to give it back! I love that scene where he says with that unique Shatner voice: "I won’t give a devil man what he wants!" 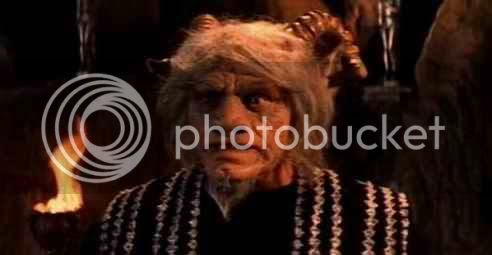 This movie was a fun watch. I think it’s the combination of Ernest Borgnine and William Shatner is what did it for me. These guys are a hoot to watch! Ernest Borgnine as Corbis is positively evil! But weird as it may be, he is also funny! In an unintentional way that is. Borgnine’s performance is both cheesy and good at the same time. He looks funny dressed in red garments all the while his beer belly sticks out like a sore thumb. And it’s even funnier hearing him call the devil, saying all sorts of sacrilegious phrases. Then there’s Shatner who is always enjoyable to watch! He is guilty of over acting on this film on more then one occasion. He spoke his words as if he was giving commands aboard the Enterprise. It felt to me like the filmmakers brought these two actors together to see if they could bring the cheese factor higher. Well, I’ll tell ya, they achieved it. And goddamn it, even with all its faults, this film was fun as hell to watch. And for those of you holding their breath to catch Travolta in his second film role -his first being the William Shatner directed The Tenth Level (1975)- well don’t blink cause you just might miss it. He is virtually unrecognizable under the satanic black garments and make up. Honestly, the only way I recognized him was by looking at the dimple in his chin. He is practically an extra on this film. Well, I guess we all got to start somewhere!

The atmosphere in the movie is excellent. Right from the first opening minutes you are treated to an opening sequence that will certainly pull you in! You are right smack in the middle of a lightning storm with buckets and buckets of rain falling and the wind blowing like a madman. It just pulled me in right away and I loved that! Then there’s the spooky ghost town in which the Satanist’s do their worshipping. The isolation factor was very high on this production. The desolated town was a ripe old place for Satan mongers to fester in!

Something that has to be mentioned when talking about this Satanic Opus is the make up effects. We have to remember that this movie was boasting to have "the most incredible ending on any motion picture ever!" So of course, we should expect something special in its last frames. And special it was. Not mind blowingly special, but special enough to liven up my Saturday night. The ending was all sorts of gooey, messy, wet and slimy. Well worth the wait. The ending definitely lives up to the films title. What I really liked about the ending is that it goes on and on! We get to see slimy Satan worshipers melting in the rain for a long time! They really took their time to show these devil bastards melting in every which way they could possibly think of. I guess they spent a lot of the movies budget on the melting effects so they really wanted you to get a good look at them. Some might think this goes on for longer then it should, but I enjoyed it just the way it is.

The film has a couple of negative things about it. Number one, its pretty dull. I mean, it has all the elements for an entertaining movie, it just doesn’t know how to display them in an entertaining fashion. But of course, the cheesy factor comes in and makes things a bit more watchable. So yeah, its cheesy as hell. I mean come on dudes! Didn’t they use a high priest of the church of Satan to write this thing? Yet the whole thing comes off as a cartoony version of devil worship. Even the devil himself is a cartoon on this one! Complete with goat horns and all! I was expecting something a bit more serious from a movie that boasted having a high priest of the church of Satan helping them along the way. But no, we get the cartoon version of what Satanism is like. But this is not to say that the movie want fun...it was oodles of fun. Just not real or scary which is one of the main complaints with this movie. Its all about Satan, but it doesn’t even try to be scary. And yet another negative thing about the film is that it never really explains why the rain melts away the devil worshippers. Why do they die when rain hits them? Who the hell knows!

In conclusion, this was a fun movie with lots of cool little things to keep you interested, gooey slimy fx, cheesy story and acting. Plus don’t forget the Satanism which we all know is always good for a laugh. I consider Satanist to be lower in the religious beliefs pantheon. It somehow feels sillier then all other religions put together. Well, maybe not sillier then Scientology, but pretty damn close! So just remember, this movie is fun times, if you don’t take it seriously. It’s just not that type of movie and anyway the minute Shatner starts saying his dialogue you’ll think his going to beam Satan up to the enterprise or something. How can you not laugh at that?
Rating: 2 1/2 out of 5 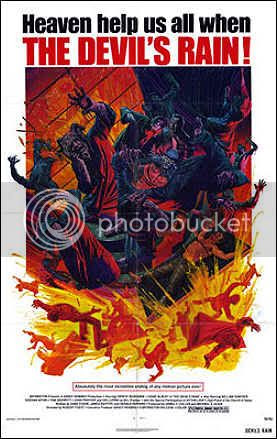 I always wanted to watch this one but never got the chance. Frankly i dont care if it sucks, i love Shatner hes cool, funny, and enjoyable to watch.

I see you mention Ken Russell's 'The Devils' which has been since its release in 1971 has been my favourite film of all time. However, it is not really a horror film - it can be horrific. It's not really about Devil worship either as it is all a scam and the film is actually based on real events that took place in 17th century France.
I wish Warners Bros would get the fingers out and release this cinematic masterpiece on DVD. A petitition has been online for years and sent off to Warner Bros but to no avail.

With Fuest and Shatner teamed up, you have a sure fire Horror Comedy on your hands lol.. Sounds like fun but I think I might rent first to be sure, if you havent seen it already you might also consider THE BROTHERHOOD OF SATAN, which is a pretty decent little Satan Worshipping flick

Manuel: We'll have a movie night and watch that one, youll enjoy it man, Shatner and Borgnine are golden in a cheesy sort of way.

Divicenzo: Ive always been interested in it. Its one of those movies that Ive always wanted to see because it sounds so controversial, which is probably the reason why it hasnt been released yet. Sad. Warner Brothers should grow some cojones. Or maybe the Criterion guys should do something with it.

Carl: Yeah, rent it first, but a Shatner fan should love it. Brotherhood of Satan, Ill write that one down on my list! Thanks for the suggestion!