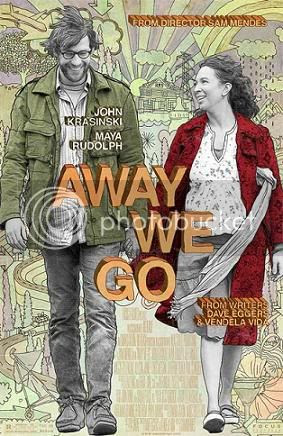 Sam Mendes’s American Beauty is one of my favorite movies ever. I love how it puts the suburban american family on the spotlight during those moments in life when a couple can get bored with their relationship and forget to keep things interesting, forget about that first love that got things started. The direction is spot on, and the dialog witty and fresh. In his new film Away We Go, Mendes explores the other side of the spectrum, the couple thats just getting started in life, and how they try and find the best way to start down that long path. Sam Mendes usually directs dark films, with serious subject matter and themes. Films like Jarhead, which deals with the woes of going to war, Road to Perdition, a gangster film. All dark films, but, it seems Mendes wanted a break from all the gloom and doom and decided to do a light film. A film where not a whole lot goes wrong. 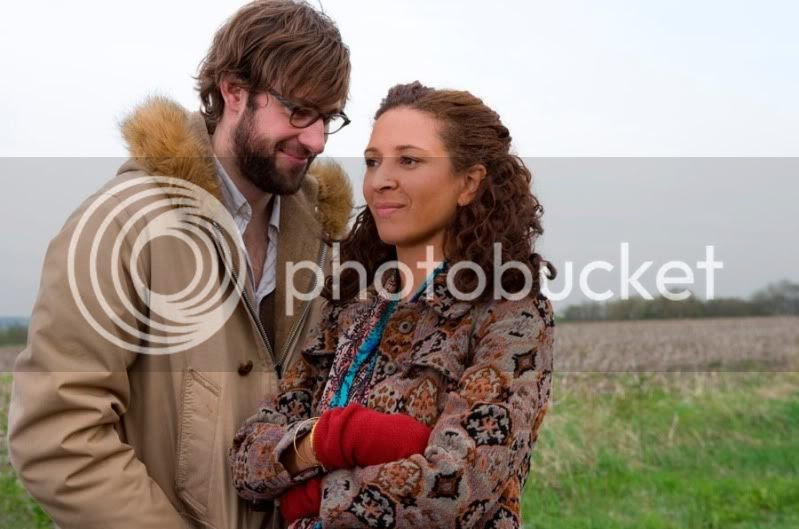 Story is about a young couple, Burt and Veronna. One day while they are sitting on their couch in the middle of the freezing winter in their humble little home, they suddenly start wondering if they are "fuck ups” because they dont have their own home. They are in their 30s and they haven’t done a whole lot with their lives. They don’t have their own place, and well, things aint going all that well in the money department. The sudden change in perspective comes when they learn that Veronna is pregnant. Now they realize that life isn’t just about them anymore, they have an extra little human along the way, and they gotta take care of it. So off they go in search of the best place in which they can raise their child. Their big plan is to go and visit a lot of their friends, and see which place is the best for them to settle in. 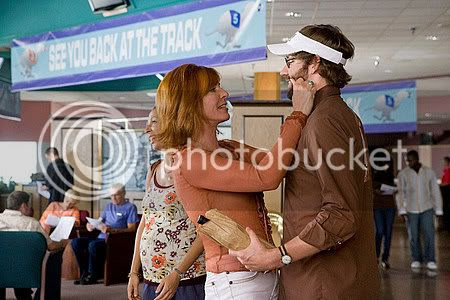 The thing with this movie is that Burt and Veronna are constantly on the move, from state to state searching for the best place in which to raise their child. And with every place they go to, we get to meet a new friend of theirs. Everyone is different, every one of them has children of their own, and they all raise their children in different ways. So this is what the film is trying to show us, how different people raise kids differently, and basically, with every couple we’re supposed to learn what not to do while raising a family. 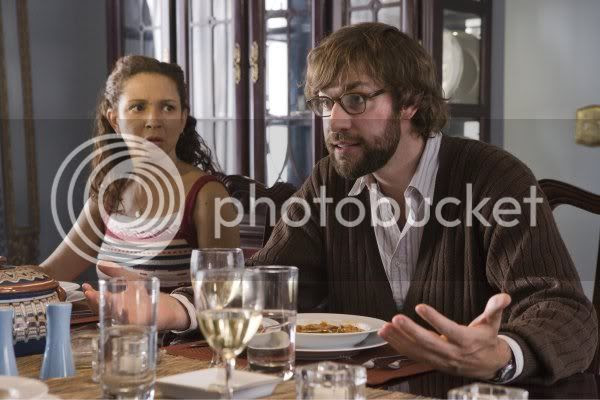 The movie stars John Strasinsky as Burt, most of you probably know Strasinsky from The Office, where he plays Jim. In Away We Go he plays more or less the same character, but with a beard. You know, the nice guy, doesnt fight, doesnt yell, treats his lady well, with love and respect. Maya Rudolph plays down her comedic side from her days on Saturday Night Live to atone with the movies ultra mellow vibe.

Cool thing is that with every family we meet, we get a different set of actors. First we get to meet Burts parents, played by Catherine O Hara and Jeff Daniels, and basically, we learn not to be selfish assholes who only care about themselves and their fun retirement plans and not about their son, who is just about to have a kid of their own and his gonna need that extra help once the baby is born. Then we get to meet a couple who are foul mouth in front of their kids and have absolutely no connection with them whatsoever. We get to meet Maggie Gyllenhal and Josh Hamilton who are these ultra hippy parents, who are so new age, they don’t know how to connect with OUR age, so they raise their kids to live in an unreal reality. And so on, we keep meeting a couple more of their friends until they finally make their decision. 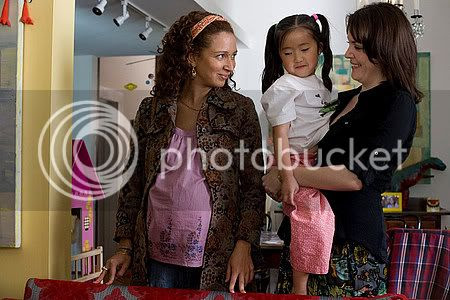 It’s a nice little film, very light. We get some nice chemistry between Maya Rudolph and John Krasinsky. What I never got about the movie was, if they are supposedly so poor, how come they have so much money to travel from state to state? They are supposed to be so troubled, but they sure don’t look it. They got money to pay for plane tickets and rent cars and hotel rooms, werent these kids supposed to be "fuck ups"? It really didnt feel as if they were in that bad of a situation. Krasinky and Rudolph are very likable characters, they play the ultra normal couple who truly love each other and want to live a normal live in the middle of this crazy world, good idea if you ask me. Still, some might feel as if Burt and Veronna are two self righteous individuals who cant accept others for who they are. So basically, they go through the whole movie saying “lets not do that! Those people are crazy!” And running away to the next ‘crazy’ family. Thing is, were all kind of crazy, and we all raise kids however we think is right, what might be crazy to one individual, might be completely okay with the other and so forth. So some people might get that vibe. But I guess these characters are striving to be as “normal” and good as possible. They don’t yell, they don’t fight, they even have to make believe they are fighting cause they are so good to each other! Which is a good model to follow I guess. Not a bad movie to watch if your in those crossroads from being a twenty something, to being a thirty something and contemplating having kids.

Im a HUGE AMERICAN BEAUTY fan too, and the wife is in love with John Krasinksky so I will definitely have to check this one out. Amazingly, I hadnt even heard of it before this review!

Ive seen a couple of reviews for it on the web, and I saw it at my local indy theater, but it had a small release, like most independent films do.

Let me know what you think about it when you check it out Carl!

well, its a light film, but i think it talks about very deep issues..and sometimes you dont have to be super poor to feel like a fuck up, maybe you just feel like you havent done somethig really meaningful, something important, that youre not the best person you could be...those are issues that most of us have at some point! i totally agree with the fact that is weird that the dont have a lt of money, but travel to like 4 diferente states! ahahaha... stiil,i liked the movie...thanks for the review!

Agree with the points you bring up Reina, you can be a "fuck up" for many reasons, amongst them not achieving your full potential, specially when you have it within you to get there!