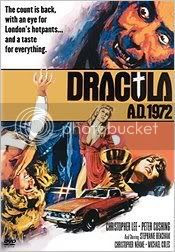 
When it comes to Hammers slate of Dracula films everything is fine and dandy until we come upon two films. Dracula A.D. 1972 and The Satanic Rites of Dracula (1973). Today I'll be focusing all my hatred on reviewing Dracula A.D. 1972. The thing I love about these old Hammer films is how they all take place in a time of castles, and fog, and full moons. A time when people rode in horse carriages and didnt have cars, these films took us to another time and another place. The proceedings were made almost magical because of the atmospheric way in which Hammer Studios produced these films! So what happens when a studio wants to adapt to modern times and tries to put these old Dracula films in moder times? A disaster. Thats what happens! 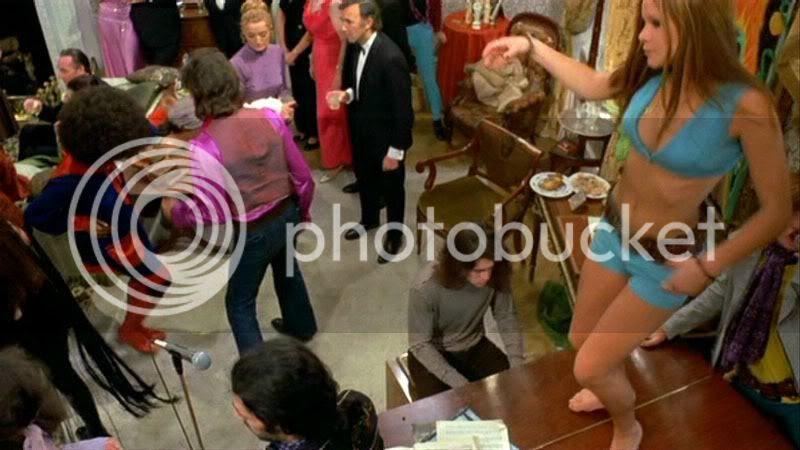 Sometimes movies can turn into time capsules that transport us into the past or into the future. With Dracula A.D. 1972 were magically whisked away to a groovy time in wich Austin Powers would have felt right at home! The story is about this group of kids (were not a gang! were a group!) that love to hang out at a cafe shop called "The Cavern". The kids are bored, and looking for something to do. One day, Johnny Alucard (hmm strange last name...wait...it spells Dracula backwards! Aha!) a new kid in town waltzes into the coffee shop and offers the group of kids a new way they can get their kicks. He offers them a night of black mass and black magic! To wich they say "sure why the hell not, it could be fun!". So in no time flat, they find themselves resurrecting Count Dracula from the ashes. Problem is, one of the kids in the group is a direct descendent of Dr. Van Helsing! And that just doesnt sit well with Dracula at all! 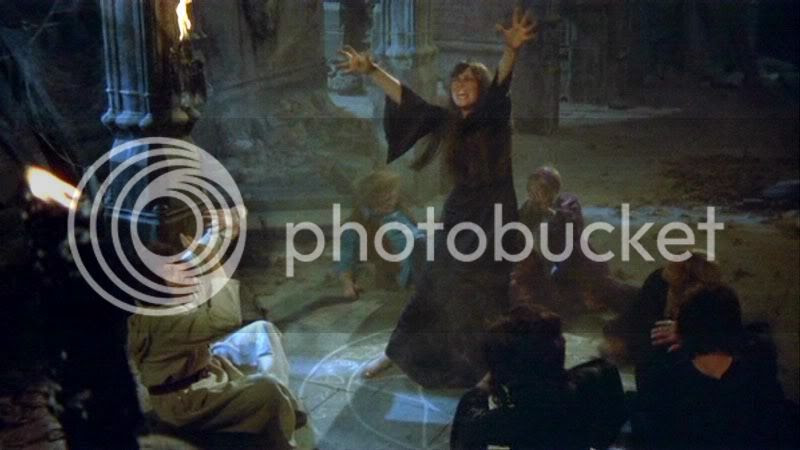 This movie opens up with a swinging party somewhere in London, of course, this is just a way to try and get modern kids interested in these films, so they can feel identified with their music, and their clothes and they'll want to spend there money in this new modern take on the age old Dracula formula. As I watch this whole scene of young kids partying the night away in his house, doing drugs, making out and dancing on top of tables, I kept asking myself how they were going to fit Christopher Lee with his red and black cape into all of this. The filmakers wanted to make sure that this film was completely engulfed in whatever young people considered cool at that time. Everyone says words like "way out" and "groovy" and they finish many of their sentences saying "and all that jazz". To top it all off, theres a band that sounds something like "Jefferson Airplane" playing at the party...I mean youll be drowned in all things 70s! How was Dracula going to react when he wakes up in this modern world? Is there room for Dracula in the midst of modern 1970's London? 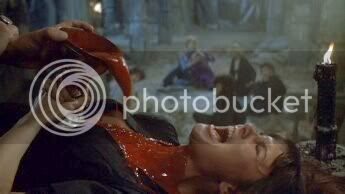 Of course this being a Black Mass, some blood has to be spilled on the altar..


Thats exactly the problem for me with this movie. Dracula feels really out of place in between all the partying and the rock and roll and the drugs. There are some potentially cool situations going on but sadly the music they decided to add to the proceedings doesnt fit at all and completely takes you out of the mood of things. Something horrifyin or scary will be happening on screen and suddenly a bunch of loud trumpets and congos start to beat and your just completely taken out of the horror element. The musical choices for this film sucked the atmosphere right out of this movie! Suddenly it felt like when Dario Argento puts heavy metal in one of his movies, and it just doesnt match with the feel of the horror film. Why couldnt they have updated Draculas look somehow? Does he always have to dress like he is stuck in time? How about having Dracula update his garments or something? Unfortunately, on this film, Dracula looks like an old dude trying to fit in within the young kids of the 70's. The ones to blame for this are Warner Brothers Studios and their Count Yorga The Vampire was succesful, therefore they wanted two modern day Dracula films from Hammer Studios. As a result we got this one and The Satanic Rites of Dracula, both dreadful in my book. 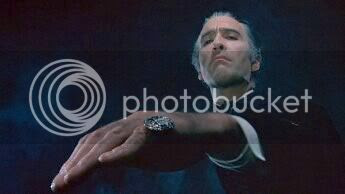 Another negative aspect of this film is that the story is just a re-hash of what they had already done in Taste the Blood of Dracula, which was a great film on its own. The story in Dracula A.D. 1972 is damn near identical, save for the fact that its set in London during the 70's and its got young people as lead actors. Lets see, a young lad inherits Draculas ring and ashes? Check! He then decides to bring Dracula back to life with the help of some people who know nothing about what they are getting into? Check! They perform a Black Mass to bring Dracula? Check! Said black mass takes place in a desecrated church? Check! The list of similarities between these two films goes on and on. So to top things off, this movie wasnt too original either. 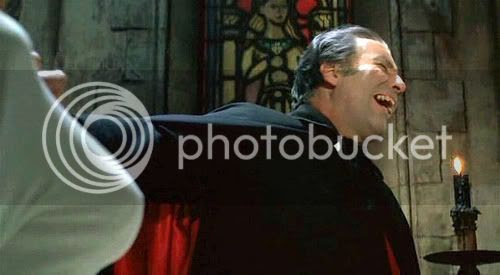 No! Get those boobs away from me! They are too beautiful to behold!


There are a few things that make this movie worth while though. For example the fact that the movie is a time capsule to London in the early seventies makes the film entertaining. It made the movie fun for me, but we are here to get spooked, were here to see Dracula kill a few virgins and take his revenge on the House of Van Helsing. Did we get any of that? Well, in a way. We do get some Dracula vs. Van Helsing action. Only thing is that its too brief. The movie starts 100 years in the past, with Van Helsing and Dracula fighting on top of a horse carriage as its rasing through a forest! Both Dracula and Van Helsing die, but one of Draculas servants picks up his ashes and they are cared for 100 years until they end up in the hands of the guy who resurrects him in 1972. Then, in the 1972 Van Helsing and Dracula have another encounter and they fight each other off yet again, the proverbial battle of "good vs. evil". The one good thing this film has for it is that Christopher Lee plays Dracula, and he looks awesome even if the film does make the character feel like its entirely out of place. And that we get Peter Cushing playing both Van Helsing in the past and Van Helsing's descendant in 1972. I really cant say this film has anything other then that going for it. 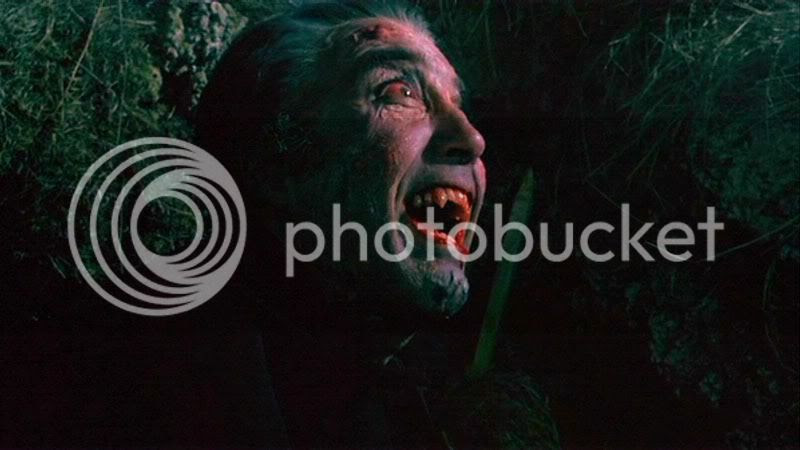 All in all, an unintentionally funny Hammer Dracula film. Its trapped in the 70s and though that makes it a fun watch, it still doesnt gel well with the Hammer Dracula universe we've come to know and love. 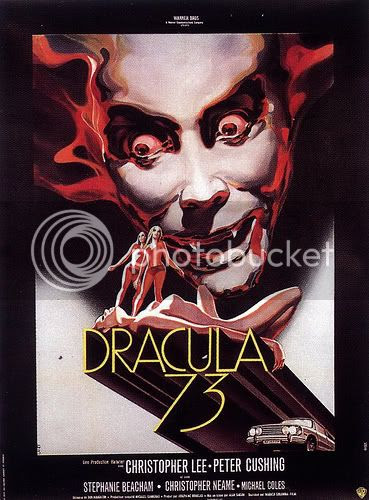 This foreign poster for the film was altered because it was released one year later in other countries.

I love Satanic Rites of Dracula.

Anyway I haven't seen this film but I have to say I've never really wanted to. And I don't think I will.

Mr. Fiendish, I dont know, I just couldnt find myself liking Satanic Rites. I havent watched it in a while, but I do remember hating the hell out of it, for the same reasons, the modern day setting just doesnt gel well with Dracula. Ill be reviewing it soon, and before I do Ill give it a re-watch just to see if I still hate it as much.

I was actually very surprised with SATANIC RITES, didnt mind it at all and found it to be an interesting alternate universe Dracula that hid behind the scenes with his fingers deep rooted in societies ills.

As for 1972, garbage. One of my least favorite Hammer films for all of the same reasons Franco.

Hey Carl, Im gonna have to watch Satanic Rites of Dracula one more time, just to make sure I hate it as much as I think I do.

I never did bother with a second viewing...Ill give it a second go and do a review for it!

Keep your eyes peeled for it!