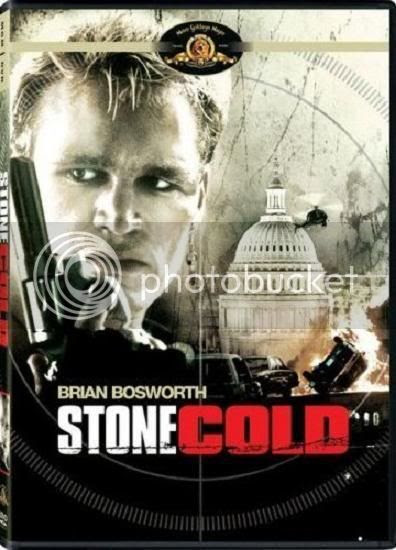 I put Stone Cold, under the same category as Sylvester Stallone’s Cobra (1986), you know, balls to the wall action with a testosterone levels that are off the charts. Right from this movies opening sequence, you can tell the director was using Cobra as a blue print. It starts out with some ass kicking in a supermarket, just like Cobra did. Brian Bosworth is dressed pretty much the same way Stallone was in Cobra, with long black trench coat, black cowboy boots and blue jeans. This film comes to us from director Craig R. Baxley who gave us Action Jackson (1988) and  I Come in Peace (1990), both of which aren’t bad action films at all. Having directed these two action films is probably what got him the job to direct this one. It’s a macho movie every step of the way. A guys film. It’s got giant motorcycles, naked chicks left and right, explosions, fights, guns, dudes kicking the hell out of each other, a biker gang. I don’t think a movie could be more 'macho' then this one. 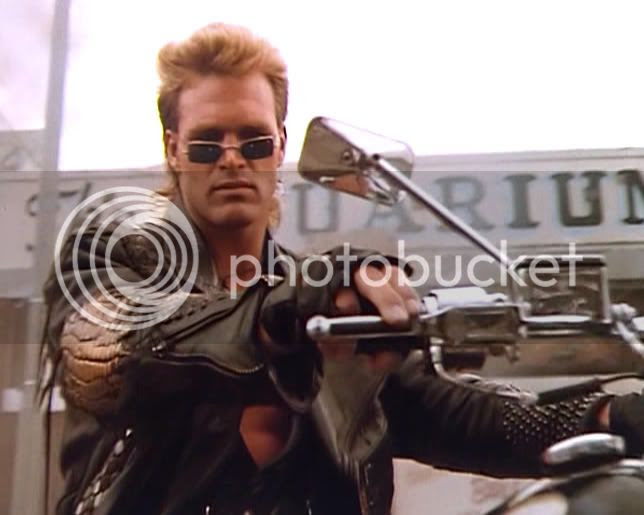 A motorcycle gang is terrorizing the streets. The kind of gang that you don’t want to mess with. The kind of gang that if you mess with one of them, you mess with the whole lot of them. Kind of like the way the Hell’s Angels grew in the United States back in the 70’s, to the point where they had chapters everywhere. Basically, they are a bunch of red neck, hillbilly, rebels who don’t want to work 9-5. They’d rather, party 24-7, be hammered 24-7 and party like its 1999. You know, the kind of biker gang that don’t like to bathe, shave or do anything proper. They want to go against the rules! They want to smash your face! You piss them off and they answer with a sucker punch right to your balls! So basically, in Stone Cold, this motorcycle gang is pissed at some politician because he wants to make the death penalty a must in his state. The bikers don’t like that, so they want to wipe him out.

So wow, where do I start? Well, I guess the best place to start would be by talking about the films star: Brian Bosworth. He was a football player for the Seattle Seahawks back in the 80s. You know, the guy that got run over by Bo Jackson. So anyways, after a lackluster career in Football, the guy decides he is going to be movie star, making action films for Hollywood. His first stab at filmmaking wasn’t all that bad. Stone Cold, with all its cheesiness and 80s mentality is actually a decent action flick.

It’s got all the right ingredients for a good action flick. The idea behind this movie is, Bosworth goes undercover and becomes a member of the biker gang, to try and stop the assassination attempt. Its basic plotline is very similar to that of Kathryn Bigelow’s Point Break, which was released on the same year. If you remember correctly, Keanu has to try and infiltrate the gang of surfers who are holding up banks left and right. He kind of becomes friends with them and then it becomes difficult to distinguish between his real life as a cop and life with the surfer gang. Well, Stone Cold is basically that same movie. Just switch surfer gang for biker gang and replace Keanu with The Boz. This movie also made me think of Hunter S. Thompson’s book “Hell’s Angels” where Hunter S. Thompson actually lived amongst the Hells Angels for about a year, after which they kicked his ass for using them to write his book. But that doesn’t happen with The Boz on this movie. The Boz infiltrates the gang, and actually earns their respect from the get go because he starts off by kicking some ass, after he's had his egg-orange juice-banana energy shake of course! 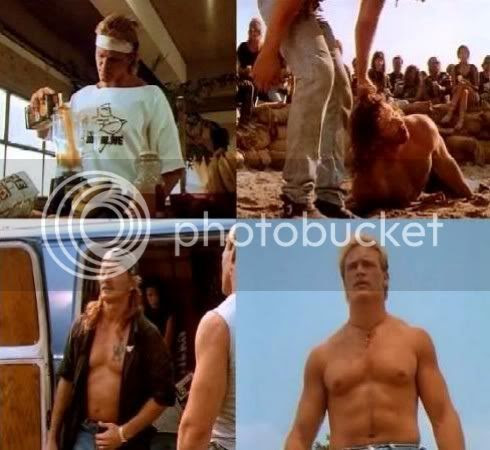 So now comes the part of my review where I analyze the laugh inducing moments of this film, cause hey, this movie was made in the 90s, but its still got a little bit of left over 80s mentality within it; so laugh inducing moments are practically mandatory. Its an 80s action flick every step of the way. Heavy Metal was taking over back in the late 80s early 90s. This was way before Nirvana came along and screwed things up for hair bands everywhere. As a result, this films soundtrack is very heavy metal, as well as its attitude, the guys on this movie all listen to metal, they all wear skulls, rings, leather jackets. There’s only one problem, amongst all these dirty, unshaven, smelly heavy metal loving biker dudes, one person stands out like a sore thumb, and who is it? The Boz! Brian Bosworth who calls himself John Stone in the film, does not look like a biker at all. Number one, he actually wears neon colors while riding a bike. There’s this one scene where he’s wearing this neon green bandana on his head, and I’m like: Okay, its obvious, your NOT a fucking biker dude! Give it up! Another thing is: who the hell chose Bosworth’s wardrobe for this movie? Was it himself? Cause it sucks! He wears these gigantic leather jackets! They make him look like a Highlander on wheels or something! There’s no doubt about it, Bosworth was a fashion victim on this film. But hey, its great for a laugh. Don’t get me started on that mullet! 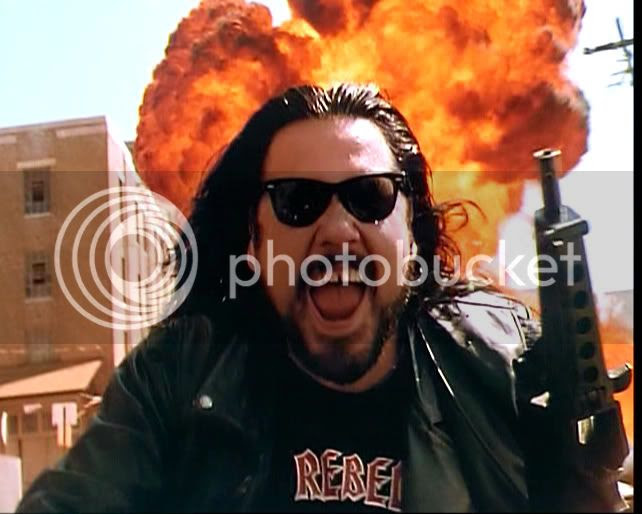 Then there is this scene in which The Boz appears in his underwear, that’s so obviously unnecessary, its like “look at me, I’m fucking hot! Bask in the awesomeness of my built body!” It was funny, and I was thinking, okay, this is a guy’s film because everything in the movie is aimed at guys, so why was that scene in there if this movie is made 100% for guys? I didn’t get it! I guess the director wanted to give something for the one or two ladies in the audience that were dragged by their boyfriends to see this action flick. I practically heard the girls screaming when that scene came on! Good thing is that the film quickly compensates by immediately placing a naked chick on the dudes bed. And speaking of nudity, there’s lots of it on this one. It has the obligatory “lets talk things out in a titty bar, with naked chicks on the background” scene. Hell, girls play pool topless on this film! So if you like some naked chicks with your action film, you’ll be more then pleased with Stone Cold. 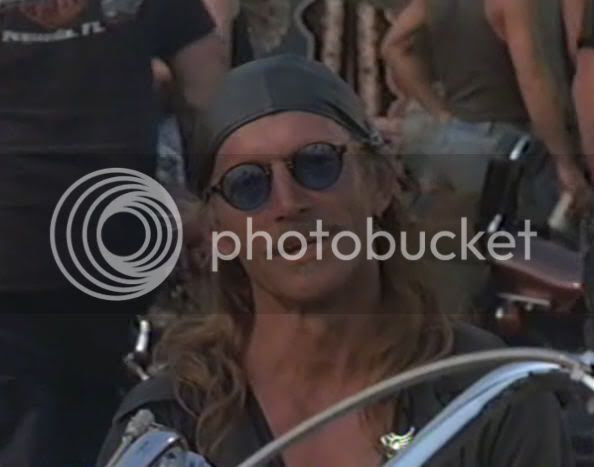 So what else does this film have to offer other then nudity, action and The Boz? Well, Lance Henriksen playing the leader of the biker gang that’s what this film has to offer! And he plays it great. He wasn’t all that old just yet, actually, Lance Henriksen was ripped for this role! He runs the gang as if it was some sort of religion. He says “this is my cross, my church, my religion” and to top things off, when he wants to infiltrate a building, he dresses up like a preacher so they let him walk right by! He’s great in this movie. We also get William Forsythe, back in his early days. On this one he plays second fiddle to Lance Henriksen. The henchman who doesn’t trust The Boz. Not one bit! The rest of the cast is composed of real life bikers! Which adds a bit more credibility to the proceedings. Theres this one scene where all the bikers are shooting their guns, and watching these two guys kicking each others asses like some Gladiator show or something, good scene, everyone is crazy, going out of control, gotta give kudos to this movie for making these scenes genuine by using real bikers. 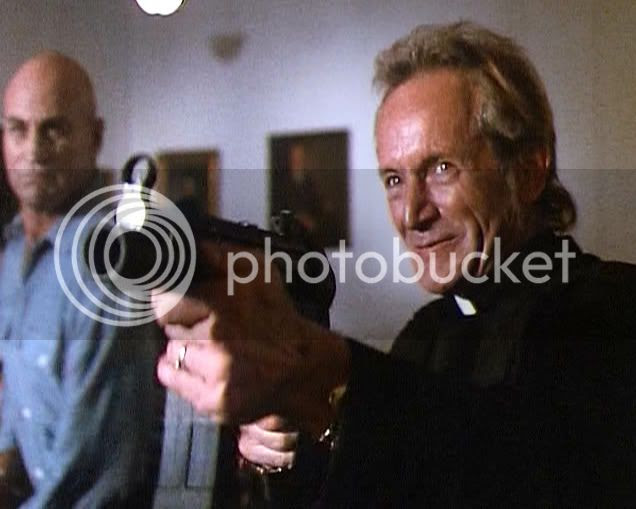 And then there’s the stunts! Bikes crashing out windows and exploding on helicopters! Chase sequences where bad guys smash their bikes onto oncoming traffic! When somebody is fighting in this movie and they hurl somebody, they really freaking throw them! I mean people fly! These biker dudes entertain themselves by shooting bear cans off of their shoulders! With machine guns!

A fun action film! Its over the top, and crazy. Everybody is in “fuck you!” mode! Everything blows up, everybody runs on choppers, and The Boz kicks ass like he was The Terminator, which is really what they were trying to do here. Make Brian Bosworth the next Arnold or Stallone. Though in truth, he looked more like the next Dolph Lungdren, actually a great many scenes remind me of Dolph Lungdren. At times, The Boz actually talks like Lungdren! Anyhows, not a bad action film, actually a pretty cool one from the 90s! Right up there with Stallones Cobra. Good for a laugh, good for some fun. 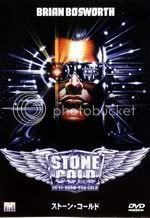 This foreign poster for the film actually makes it look like a Terminator film!

One of my fav movies. Great fun. I'm still waiting for a dvd.

Oooh I love me some Stone Cold!

Agree with ya 100% brother. Nothing beats superhuman bikers, guns, explosions and mullets.

This sounds like one I'll have to track down.

@God of War: Isnt it already out on DVD?

@CinemaDuMeep: Yeeeeaaaah! Up next I think Im gonna be re-watching either Invasion U.S.A. or one of those American Ninja movies..or maybe a bit more 90s action films, theres a couple of good ones.

@Manuel: Superhuman bikers indeed! Boz would have made a great He-Man back in the day, if Dolph Lungdren had not done it. I swear I was waiting for the Boz to say something like "There can be only one!"

@Bob: Do so at the earliest possible convinience man, its fun times! The whole movie feels like the first 20 minutes of Predator 2? You remember that one? Where all the drug dealers are having this mean ass shoot out with the cops? Its something like that! I honestly believe that violence in action films got out of control in the 80s! We dont see movies like these anymore. Theres one scene on this one where a villain enters a building and simply shoots at everyone with a machine gun! It was crazy!

Both Point Break and Stone Cold are essentially No Man's Land (1987). Still, its a formula that doesn't get old, eg Fast and the Furious. Anyways, I came across this review looking for Stone Cold on blu ray! Good review, although the score seems a little low.

Glad you enjoyed the review, I dont think 3 1/2 is a low rating, I actually liked it a lot!