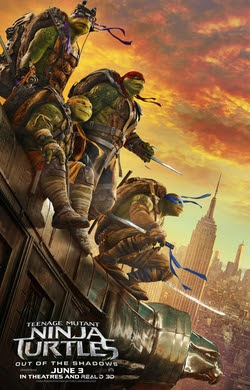 Back when I was an 80’s kid being brought up on a steady diet of cartoons, the Teenage Mutant Ninja Turtles cartoon that aired circa 1987 was required viewing. There was an excitement to that intro song; it still rings in my head every time I talk about the turtles. When I first caught a glimpse of how the turtles were going to look on Steve Barron's Teenage Mutnat Ninja Turtles (1990), I couldn’t believe they had actually brought the turtles to life! The talented individuals at Jim Henson Muppet Workshop helped make the first live action turtles film a huge success at the box office. The combination of animatronics and actors in suits worked like magic. It’s been more than 25 years since that first Turtles film and the way films are made have changed in a huge way. Thanks to the advent of computer generated images, any crazy idea conceived can come to cinematic life, even pulsating alien brains from dimension X! Want a half warthog half human creature to terrorize your heroes? No problem! Anything goes if you can think it up! And this is something that the filmmakers behind Teenage Mutant Ninja Turtles: Out of the Shadows take full advantage of. 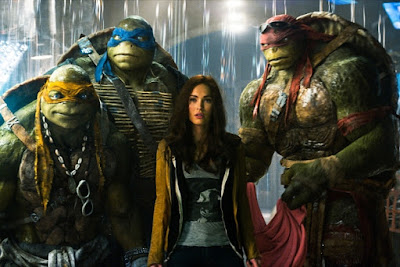 This time around the Turtles have to fight Shredder, the foot clan, mutants and evil aliens who are hell bent on conquering earth! They also have to decide if they want to stay turtles or turn into human beings. Will they choose to turn into humans, or will they fight evil as their true selves?

One of the few problems this new film has is that it isn’t all that original. The idea of the mutants turning into “regular human beings” has been played out in the X-Men films. Dimensional portals opening up in the middle of New York City was the blue print for Marvel’s The Avengers (2012), in fact, if we’re going to get right down to it, Teenage Mutant Ninja Turtles: Out of the Shadows (2016) plays with similar themes already seen in Teenage Mutant Ninja Turtles II: The Secret of the Ooze (1991). So this one doesn’t get any extra points in the originality department. One original element the film does have is that it plays with the notion of the Turtles leaving their anonymity behind and emerging into the real world, letting everyone know exactly who they are, but I think that’s about as original as we get here. What it does excel in are the action sequences and the special effects which are top notch in my book. The film is designed to keep you entertained for every single second screen time, one cool moment pops up right after the next. There’s this cool chase sequence down a highway, in which the Turtles are trying to stop Shredders escape which is just awesome. The turtle wagon is freaking sweet. There’s a scene with the turtles riding on a plane that’s about to crash on the Amazon, which was spectacular!  I can guarantee you won’t be bored for a second, which is probably a good thing if you have that six year old kid with ya. This one is none stop action, thrills and jokes. Trust me, the kiddies will be entertained.

The turtles themselves are a huge part of what makes the whole thing work because the combination of voice acting and cgi animation works like magic, there’s some good computer animation here, I have hand it to these guys, the turtles look alive. Computer graphics can make or break a film, and more so in an effects heavy film like this one. So on that regard you can rest easy, these turtles breathe and shine! 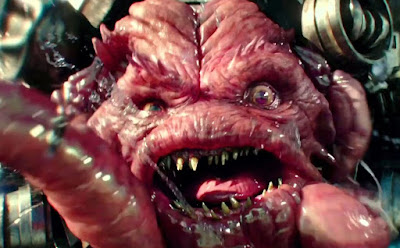 In terms of pleasing those die hard Turtle fans out there, I think this one did good. I mean, here we get Casey Jones, the turtles human side kick, we get the introduction of Beebop and Rocksteady and the pulsating brain/robot from Dimension X known as ‘Krang’; the films major villain. They even included the cartoon intro song in the end credits which had me singing all throughout the end credits. Yet not all is perfect in Turtle Land. Shredder, the turtles greates villain plays second fiddle to Krang and thus, Shredder comes off as absolutely useless this time around. He really doesn’t do much, I kept wondering why they even bothered to bring him back. I also had an issue with the films climax, the whole thing with the dimensional rift opening up in the New York City skyline was too similar to The Avengers. I’m of the opinion that filmmakers should always strive to do something different with their films. If you’re idea resembles some other film visually, then don’t do it. But you know Hollywood, if something worked on some other film they’ll try and duplicate it to death, and so the grand finale in The Avengers has been redone and redone to death. Last time I saw a dimensional gate way opening up in the sky was in an awful movie called R.I.P.D. (2013). It had me rolling my eyes then and it made me roll my eyes in Teenage Mutant Ninja Turtles: Out of the Shadows (2016). But then again, if we get down to it, right from the get go, Ninja Turtles has always been about other dimensions, Krang comes from Dimension X! Whatever, I guess we can chalk it up to the filmmakers knowing the are going up against Marvel movies, so they want to give us something equally spectacular. All I'm saying is they could've gone with something visually different with regards to the whole dimensional rift thing.

But whatever, I was having a blast with the movie and as you guys already know, that’s all I really care about when it comes to Summer Blockbusters. If it wows and entertains then your job as a summer film is done. And in those terms I’d say this one is a success. It’s bigger and more expensive than the first film. It’s louder, and more action packed and it’s more cartoonish, closer to the kind of plotlines we’d get on the cartoon show. Its target audience is nostalgic fans who grew up watching the cartoons and the new generations of younglings who are just getting to know them. If I was a 12 year old kid, I’d be happy as hell with this here movie, hell, I ain’t no teenager and I loved it.  So as far as I’m concerned, mission accomplished turtles; let’s hope you make a profit at the box office so we’ll see a third outing.

Quick comment here. The Turtles are actually mostly motion capture in this film, with the voice over for Leonardo, done in the previous film by Johnny Knoxville, now provided by the motion captor actor portraying him (Pete Ploszek), so mostly everything you see on screen was really acted out on set.
Here's a short video showing how the scenes were set up: https://www.youtube.com/watch?v=fgdTT6Eam7w

Unfortunately, where I live, the movie is regarded as exclusively for kids and is not being shown with their original voices, so I won't be seeing it until it comes out on home video.

Yeah, I'm aware of the whole motion capture deal, this is the reason why their movements look so lifelike. The animation is top notch also, I mean, the shadowing, the lighting, the glistening of the sun on the turtles skin (especially on those scenes where they are in Brazil coming out of the river) is just wow. Hope you enjoy the movie, its a fun ride!

Thanx for that link Cybolic!

Actually it all happened in the cartoon so I'd say that the Avengers kinda borrowed from TMNT.

Exactly, Krang was from Dimension X all along. Actually, if we get down to it, the turtles were traveling to other dimensions since their comic book origins! ;)

Just seen the movie. It was freaking awesome!!!

Glad you enjoyed it, a turtle fan should be extremely happy with it! I was happy to see they included the intro song to the cartoon show in the end credits! I of course was singing it all along, also, the nods to Vanilla Ice were hilarious.

They should've included Ninja Rap instead of Ice Ice Baby.

If I remember correctly it actually appears during the end credits.