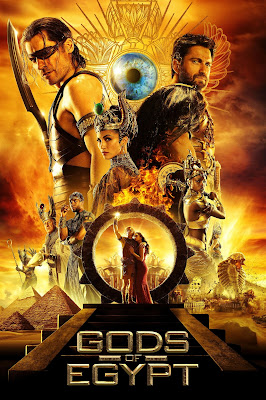 Every once in a while a movie tanks at the box office, when it shouldn’t have. I mean surely, most of the films that get the shaft by audiences usually deserve it, but in the case of Alex Proyas big budget fantasy extravaganza Gods of Egypt, it didn’t. I kick myself in the ass for listening to that first batch of negative reviews that accused the film among many things of “white washing” the cast, which means that a group of people got angry because characters that were Egyptian (and therefore should look Egyptian) where being played by white actors. I don’t really care about that sort of thing; I’m just enjoying a movie here. Weren’t we past the whole skin color thing? Guess not. Anyways, reviewers decided to spew their hatred at this one and well, no one went to see it. This is the kind of film that was badmouthed even before it was released. And so, it only made back 31 million dollars on a 140 million dollar budget, which means it was a gargantuan flop. It’s sad because a box office flop of this magnitude cold  spell the end of Alex Proyas career, which means no more big budget films for him. The worst part is that this movie, in my opinion, is an excellent action adventure fantasy extravaganza that deserved to be embraced by audiences.

The story is multi faceted, on the one hand it’s about Horus, the God of Wind, trying to recover his god hood and his kingdom. On the other hand, it’s a story about a young man named Bek, trying to recover the love of his life from the icy grips of death. You see Set, the God of Chaos has taken over the land and rules it with an iron fist. Since this is a full on fantasy film, Set can do things like changing the rules of what happens after you die. Where in the past all you had to do was be a good citizen and work to go to heaven, now in order to earn your way into the afterlife you have to pay! If you don’t have something of value you are sent to hell, but if you got the goods you go to heaven with the Gods. This of course spells certain doom for poor people who have nothing to give to the Gods. Will order be set again? Can Horus learn to fight for the rights of the people? Will the Gods learn to care about humans? Or will they remain self centered and egotistical? 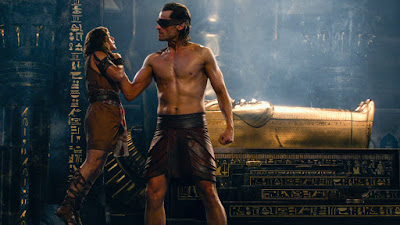 This film was awesome for many reasons, number one, it has a good story. It grabs you from the get go because it pits the despotic ruler vs. the unpredictable rebel trying to fight for his rightful place in the world. Unfortunately, Set the despotic ruler cares nothing for “the little people”; he only cares about power and riches. So it’s that classic class struggle story, the powerful vs. the working class. They had this awesome visual idea for this movie where ‘The Gods’ look slightly bigger than the humans, so it’s like they aren’t gigantic, but they are a few inches bigger than the regular humans, which made for a cool visual. I’m sure it must’ve been hell to film though, this visual effect makes practically every scene in the movie a special effect! And speaking of effects, they are top notch on this show! It's a visual feast, more so for lovers of fantasy and escapism. 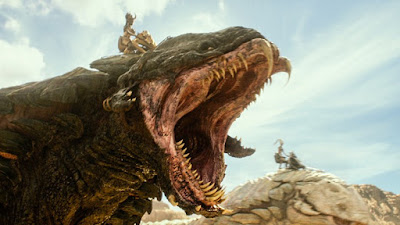 Gods of Egypt is one of those movies in which most of the surroundings are computer generated. In this sense Gods of Egypt is like the Star Wars movies, which is normally something that I frown upon. I’ve always resisted “all CGI” movies, where only the actors are real. Sadly, this is the face of the new Fantasy/Science Fiction film. They’ve evolved into this; we might as well accept it. Stop motion, matte paintings and the use of miniatures have all been replaced by computer generated images, which is fine. It’s just another form of art, thought if I had to choose, I’d choose practical old school effects. Call me old fashion but they had more artistry to them if you ask me. I have to admit that this “all CGI” element of this film was the main reason why I didn’t go see it in theaters. Yet I have to admit that like all types of special effects, when done right, they can (and should) blow you away.  I have to say that on Gods of Egypt the effects worked extremely well. There’s this show stopping scene with these two giant monster Cobra snakes attacking Horus that was just awesome.  Actually, what Gods of Egypt feels the most like is those old Ray Harryhausen Sinbad movies, with all the monsters and creatures.

Alex Proyas brought Egypt to life in grand fashion. Gods of Egypt feels like one of those big budget bible movies like Ben Hur (1925) or The Ten Commandments (1956), you know, films with thousands of extras and huge sets, only this time the sets and the extras are mostly digital. Alex Proyas is famous for directing dark moody films like The Crow (1994) and Dark City (1998), so Gods of Egypt is a change of pace for Proyas. This is a huge fantasy, action adventure, which in my opinon Proyas directed with gusto, with an affection for this type of film. If only it hadn’t tanked so spectacularly at the box office…it’s one of those films that didn’t deserve to fail at all, I’m sure it will connect with audiences down the road. I place it among the cream of the crop of new fantasy films like Immortals (2011), 300 (2006), 300: Rise of an Empire (2014) or Brett Ratner’s extremely underrated Hercules (2014).  One of the things that Gods of Egypt is being accused of is of being “dumb”, and while I won’t be the first to admit it’s not Shakespeare, I have to say that it does play with its fair share of important themes. I mean, here’s a movie in which the Gods learn to care for the people, they learn the value of humans, of the ones they consider less than them. Here’s a movie where Gods die and tyranny rules the land as the people suffer. Here’s a film where true love conquers even the cold arms of death itself. All these themes, embellished by awesome effects, a quick pace and likable characters, I ask: what’s not like? I say give this one a chance, you probably overlooked it, same as I did. 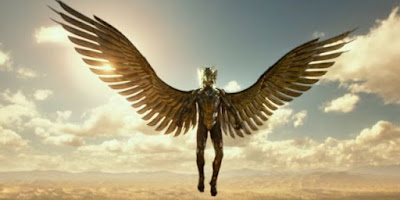 I was also dumb enough to listen all the haters that were putting this movie down. Whitewashing is the topic I want to address today. Long story short happened to be my business associate. Not really a down to earth guy, but usually his stuff is very successful since he did the first Blade movie. Last April we had a discussion regarding the whitewashing and how it can potentially ruin great films. He is currently doing Ghost in the Shell movie with Scarlet Johanson. I was very surprised with a choice. He told me that it was obvious because she is fresh out of Avengers and people still recognize her. Major Kusanagi. Scarlet Johanson. Just think about it for a minute. On the other hand whitewashing is necessary. If Ghost in the Shell delivers the top box office result then we should see a lot anime adaptations in the future. The comic book movie bubble is about to burst and something will replace it for a while. Marvel movies are getting way too lazy these days. Alex Proyas tried doing impossible, he filmed a new intellectual property not based on anything and failed because of that. It's not the whitewashing that started the mess, I believe that universal hate came from the guys that failed to sell their license for an ip.

True, movies needs those big names to sell or else people won't go see them. I'm sure Scarlett Johansson will be a huge part of Ghost in the Shell's success. I'm looking forward to that one, excited to see a live action version of the animated film. Hope it turns out good! If it does and its a success, I'm sure a live action AKIRA will be close behind.

Great review as always. Glad to hear this was a solid film. The trailers didn't really do much for me, and I love a good mythological adventure. The score by Marco Beltrami is excellent, one of the best of the year. Its a shame the movie got pummeled so hard.

I have to comment on the "Ghost in the Shell" issue. I completely understand why they hired Scarlet Johanson. I get that stars put butts in the seats. But that aside, I just wish they had offered the role to one of the many Japanese or Japanese american actresses to fill the lead role. How great would it be to get a break out performance from a fresh face - kind of like "The Force Awakens". Give her a well known supporting cast to play off of and it could have been gold.

That said, the whole issue with "Ghost in the Shell" is that brains could be placed in any kind of synthetic body you wish. So the mind of a Japanese Kusanagi could be placed in a caucasian looking body and that would work. I'm guessing that is the direction they are going to go.

I think it is sad that people aren't giving original ideas a chance. Are audiences that simple minded that if they don't recognize the story or characters they are going to just reject it out of hand? In a way that is kind of pathetic.

I agree on the body swap theory with Ghost in the Shell. But how will they treat Akira and NGE adaptations? It's all japanese cast.

Yeah, I guess that American movie studios figure that if they are making an American film, they might as well put American actors in it, it really is all about making more money and securing their investment, it's millions we're talking about here. But I do prefer it were Japanese actors, since the core of the both Akira and Ghost in the Shell happens in Japan. I wonder if the movie will take place in Japan or if theyll change the location.

Ghost in the Shell would've looked better if set in Hong Kong.

Well Sergei, you'll be happy to know they actually shot some scenes for Ghost in the Shell in Hong Kong and New Zealand.

Another good point to think about would be if the Japanese did a remake of an American film, would they cast American actors for it? Doubt it, they'd probably cast famous Japanese actors because they are making a film primarily for Japanese audiences.

The whole whitewashing thing drives me insane. I loved and appreciated your review here Franco. Can't we move beyond the color/ethnic assignments in casting? And it always seems one sided anyway. Black human torch no problem. White Kusanagi! Hold it!

I also enjoyed the remarks by Sergei here and stop getting me excited about Akira and Evangelion films people!

Seriously, if they went the route of Japanese actors for these ideas than you will get the Japanese version of Attack On Titan and that's fine. But there is nothing wrong with interpretations on a theme people. Race should have nothing to do with it.

Fully agree with ya on the whole racial issue in movies Sci-Fi Fanatic!

Sci-Fi Fanatic, I was really against black Human Torch. I bet a lot of people will freak out if Daniel Craig's next big movie is Shaft. I don't care about the skin color, but sometimes it's too dam hysterical.