The Great Dictator is one of those films that if you love movies, and you feel passionate about what can be done with films, you just have to watch at some point. Charlie Chaplin is a personal hero of mine because not only was he talented, but he also had a conscience, and he knew he had to do something more then just entertain and get rich, he had to say something about the world he lived in. All of Chaplins films do this in one form or another. They comment on poverty, the great depression, greed, power and as we can see in The Great Dictator, politics. I had seen two of Chaplin’s most important films Gold Rush and Modern Times and loved them both, but I wasn’t ready for the complete level of bravado (yeah that’s the word I was looking for BRAVADO!) that this film was going to unleash upon my movie watching mind.

Story revolves around a small Jewish community struggling because of a dictatorial government that’s trying to run them out of business and completely oppress them. You might immediately think it’s the Nazi’s and that this movie is all about the Hitler and his Nazi’s taking over and oppressing the Jewish, but it isn’t. It’s all about a government that Chaplin completely made up for this movie called Tomania. And its dictator leader is called Adenoid Hynkel. And he is the one trying to take over. In the midst of it all, there’s a Jewish Barber (played by Chaplin) who is trying to make his business survive in the midst of all the crazines, while at the same time trying to fall in love with a beautiful hardworking jewish girl played by Paulette Goddard.

So where do I begin? My level of admiration for this movie is beyond compare. I personally have adored Chaplin ever since I saw Modern Times. I think he was one of the most talented and genuine human beings to walk the face of the earth. He was so creative, a true genius. He could do the music, the editing, the choreography, the directing on a film, I mean the guy was truly prolific. On this particular project, Chaplin did all those things plus he was the producer of the film, investing 1.5 million of his own on the film. Had the film gone bankrupt, Chaplin would have been bankrupt himself. But he took it upon himself to send out this message to the world. A very important message that he felt he needed to bring to the world. To the masses that adored him as one of the biggest film stars of his time.

So basically, this movie got Chaplin into a heap of trouble with the government of the United States, and across the world because of its message. Which kind of gives us a very interesting insight as to how the politics of the world work. The main jist of the film is that at one point, Chaplin’s Barber Tramp character switches places with Adenoid Hynkel, the leader of Tomania. And because they both look so much alike, nobody notices. So the humble Barber gets up on stage and addresses Hynkel’s military forces and followers sending out a message of peace, and unity. All Chaplin was saying was to hell with war; let peace and harmony amongst humans take over. Now, I ask you, is that a message you would categorize as dangerous to the world? In this scene Chaplin took the opportunity to give one of the most incredible speeches any film character has ever given. You simply have to see it and hear it for yourself to understand how grand it is. 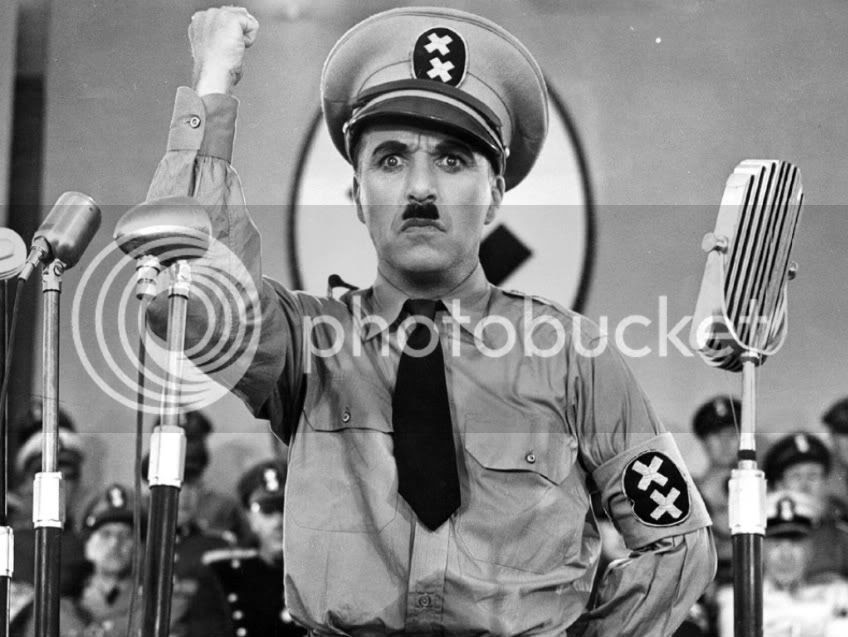 But essentially it’s a speech against the horrors of war. And about how beautiful life could really be if we stop caring so much about hate and greed. It’s really a beautiful speech. Makes you wish everyone lived by those statements. And it’s probably why he got into so much trouble for saying it. Because it’s so truthful, so heartfelt and so incredibly valid now more then ever. The speech is so incredibly rid of the usual bullshit that we hear politicians talk, where the avoid the real subject at hand, where they talk about everything except what really needs to be addressed. Not so with Chaplin’s speech on this film. It goes straight for the heart, and says exactly what needs to be said. Sad part is probably that the world hasn’t changed all that much since Chaplin made this film in 1940. War is still going on in the world, and greed is more powerful then ever. So sad.

But what about the entertaining aspects of this film? Not everything can be gloom and doom. Well, I’m happy to inform that this film is just as much entertaining and filled with laughs as it is deep in thematic elements. Chaplin is still in top form as far as his slapstick comedic abilities go. And there are some wonderfully memorable moments in this film! For example, there is this one sequence where Chaplin’s Jewish Barber is giving one of his customers a shave while doing it to the beat of Brahms’s Hungarian Dance No.5. There’s this one moment which is truly magical when Hynkel dances with a large inflatable globe of the world. Its one of the most memorable moments in cinema. There’s a sequence in which two world leaders Hynkel and Napaloni have a food fight while they decide to sign a peace treaty or not.

This is one of the things I enjoyed the most about this film, how Chaplin parodies the governments of the world in their obsession over controlling people and land, and their thirst for power. In the film Adenoid Hynkel (obviously a character modeled after Adolf Hitler) talks in gibberish that sounds like German. Chaplin takes this opportunity to make fun of how Hitler speaks, you’d swear he was speaking German, but he isn’t! Its a trick he also used in one moment in Modern Times, where you would swear he was singing in Italian, but it wasn’t. It was Chaplins own gibberish, which strangely enough you could understand just by reading his mannerisms and gestures. The results are truly funny, because in between the gibberish, you can distinguish certain words in English, its just hilarious. Even though this was one of Chaplin’s last films, he really was at the top of his game till the very end. He is one of my greatest heroes. Go and rent (or buy!) this wonderful masterpiece. It’s a film that not only entertains and makes you laugh but also says something incredibly truthful and heartfelt, and still relevant in our Modern Times.

Love the review, but one correction: it wasn't Chaplin's last film. If you're a Chaplin fan check out Monsieur Verdoux (1947) or one of my favorites, Limelight (1952)

Really? I wrote it was his last? What a mistake! Sorry about that, one of his last ones would be more appropriate, I just saw LIMELIGHT a couple of weeks ago, yet another awesome film. You could see he was already pretty old on that one, but still every bit of a genius.

Ill check out Monsieur Verdoux, thanks for the recommendation!