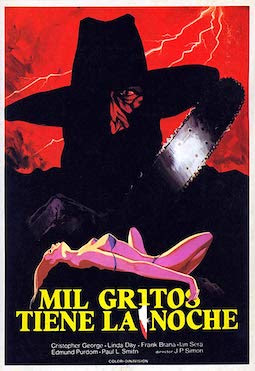 Spanish horror director Juan Piquer Simon (J.P. Simon) is one of the worst directors who ever got behind a camera...ever! The guys films are some of the worst films you will ever see in your entire life. This is the guy who directed the extremely laughable “H.P. Lovecraft inspired” film Cuthulhu Mansion (1992). Which by the way has virtually nothing to do with Lovecraft or any of his stories. I always mention Cuthulhu Mansion whenever anybody asks me about some of the worst motion pictures ever made because there's no doubt Cuthulhu Mansion is one of them. It's the kind of bad film you watch and can’t believe how bad it is. Which is why I thought Pieces was so surprising; its a 1982 slasher film also directed by Juan Piquer Simon, only thing is that its a gazillion times better then anything he did after it. 
So the thing about this film is that it feels like an Italian horror film, even though it isn’t. Main thing that gives it its Italian Horror film feel is the fact that the whole film is dubbed. In reality, this movie doesn’t come to us from Italy, but from Spain, from Spanish director J.P. Simon. It also feels like an Italian flick because it stars  Christopher George who appears in Lucio Fulci's zombie masterpiece, City of the Living Dead (1980). On this film he plays a cigar chomping detective (doesnt he always play that type of character?) hot on the lead of the psychotic killer. And of course, the film does have an ample gore quotient as well as plenty of nudity. Practically every single victim the killer slays ends up getting naked at some point! Movie is sleazy that way. As you can see, the film has all the right elements to be confused with an Italian horror film. 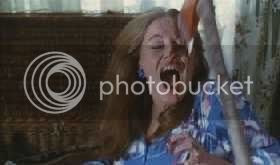 Coolest thing about this movie is its gore. It really does have some gruesome vistas in store for you. The killers favorite way of killing people is with a chainsaw, hence the films tag line “you don’t need to go to Texas for a Chainsaw Massacre”. So you will be seeing people getting their heads chopped off, people getting chopped in half. He also enjoys using a shiny kitchen knife which kind of gave the film in certains areas a Dario Argento feel. It also reminded me of an Argento flick in the sense that we don’t know who the killer is for most of the film. What we see is his silhouette, his shadow, his hands. Not until the very end is that we find out who he is. So the film really plays out like a ‘who done it’ for most of its running time. Problem for me was that you never really get to know any of the people the killer slays. So basically you never feel anything for anyone that gets slayed. What you do get is an extremely gory death, non of the usual get to know you chit chat. This directors modus operandi was Slash ‘em and Leave ‘em. Who cares who they were? We just want you to see a gruesome death! Finally, one more real reason why this film feels like an Italian Horror movie? The ending, the last few frames of the film make no sense at all! This movies last seconds remind me of the ending for Lucio Fulci’s House by the Cemetary (1981), or The Prowler (1981), where you go “what the hell just happened?” But by then, the movie has slammed its door on your face and the credits are already rolling. 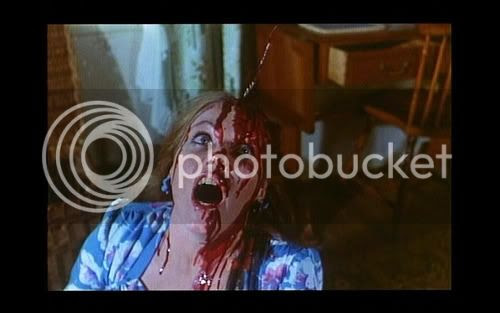 So in essence, this film feels like an Italian horror film but isn’t. It’s got elements from both Fulci (the gore and the nonsensical ending) and Argento (the unseen killer). It’s got all the gore you would see in an Italian horror film from the 70s but was actually a slasher film from the 80s! Its got nudity up its nose paying homage to American slasher films like the Friday the 13th films which are famous for doing this. Actually,  at one point a character has a Friday the 13th poster up on their wall. Another thing, its musical score feels like something John Carpenter could have cooked up with his band The Coupe DeVilles. It’s a film that’s a spawn and a mix of both American and Italian horror, but it was made in Spain. Somehow, all this mish mash of influences makes for one of the most gruesome slashers from the 80’s. Pieces wont change your out look on life, but it will entertain you with some gruesome deaths for an hour and a half.

the last shot in this movie is one of the most hilarious ever.

Lots of things were hilarious about this movie, it was funny and non sensical.

What about that scene with the girl riding a skate board and then smashing onto that glass that those two guys were carrying? What did that have to do with the movie? Nothing at all!

And what about that karate instructor that pops out of nowhere?