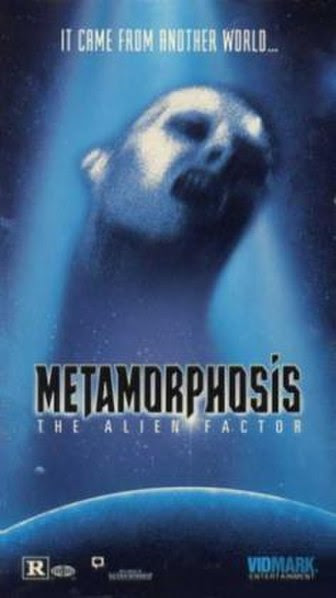 Metamorphosis: The Alien Factor is the unofficial sequel to the obscure low budget 80's gore fest known as The Deadly Spawn. The Deadly Spawn was an extremely low budget indie horror film that was made by a bunch of very talented creative people who one day decided to get together and do a horror movie on their own; with their friends and collegues as actors. They shot the film with their own money, during the weekends. Basically, The Deadly Spawn is what happens when a bunch of sci-fi/horror fans get together to do a  film about what they love, monsters! To its credit, I will say that even though The Deadly Spawn was a low budget affair, and technically it does have its faults, it’s a very creative film, and I applaud those guys for having made such a cool little film with so little. Ted A. Bohus was the producer of that project, which I consider a gem of indie horror, I mean, this film is indy horror in the truest sense. After their first film venture (which surfaced on VHS during the 80s) they decided to try and do the sequel. Thing is that even though this "sequel" plays with the same premise of aliens coming down to earth to munch on humans,  this second film is completely unrelated to the first one story wise. Ted A. Bohus originally intended to do a straight sequel, but ended up doing this slightly more ambitious (but still well within b-movie territory) sequel. It was made with a bit more money then their first film. What was the result? 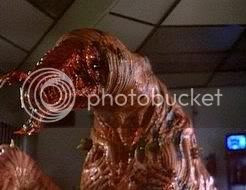 Premise for the movie is this: the government has gotten hold of some alien DNA so they hand it over to a private scientific research organization known as TALOS to experiment with. They want to see what kind of mutations can come out of it. Unfortunately for them, the alien DNA has its own agenda and so the creatures are set loose on the scientific compound, eating everything and everyone that stands in their way! Its up to the daughters of one of the compounds security guards (yup, we got the daughters of the security guards as the heroes of the film!) to stop the aliens from escaping the compound. 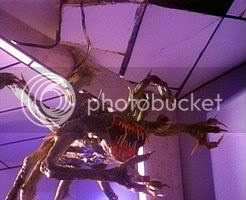 The good news is that this movie entertains, its never boring. One of the differences this film has from The Deadly Spawn is that they had a bit more money to play with. Not a whole lot mind you, but certainly more then they ever had on the first one, which translates to more creature effects, something that is really evident right from the get go on this film. As soon as the movie starts we are introduced to gore and mayhem. Metamorphosis: The Alien Factor immediately lets you know what kind of movie you are going to be watching! In the first five minutes, the aliens kill a security guard! Pretty soon we learn the results from all that DNA experimentation. Keyword is gruesome. We get creatures with weird eyes, skin color, teeth, just strange bizarre stuff. My only real problem with this movie was that even though they obviously had slightly better production values, the big monster in the film, the big bad alien, the baddest mother of all is not better  then the creature from the first film. The creature in the first film felt more alive and real for some reason. 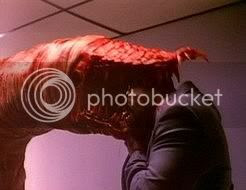 The main creature in Metamorphosis: The Alien Factor, is supposed to be this hulking mass of teeth and tentacles, yet somehow I couldn’t get past the notion that it was a miniature, something that never happened to me on the first film. On this film they decided to go with a mix of miniatures and stop motion animation, which though fun to watch, didn’t exactly top the first film in my opinion. Stop motino animation is cool, but I prefer when they use animatronics, puppets are always cooler, they feel more real. I didn’t hate the creature on this film, I was just more impressed by the creature from the first one. Problem for me was that the creature on this show seemed too static. Its movement were kind of limited, stiff. But whatever, I was digging this B-movie creature none the less. 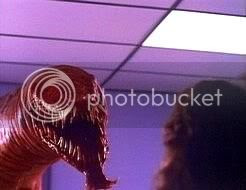 Now, speaking of this movies influences, theres no doubt in my mind that film is a son of  John Carpenter's The Thing. The director of Metamorphosis: The Alien Factor (Gren Takajian) apparently worships Carpenter's film because there are many moments reminiscent of Carpenter's classic. There are moments when the creatures have that organic feel to them. You know, slimy things pulsating and breathing and evolving. Mutating. Peeling skin off, growing tentacles. That sort of feel and look that was so evident in The Thing. Inspite of the fact that I didnt like the main monster in this movie more then the one on the first, doesn’t mean I didn’t enjoy the rest of the effects work on this film. Most of the film is spent seeing this one scientist slowly evolve into the gigantic monster, and to me these are the scenes in which the film succeeded the most, the transformation sequences. We see the scientist in various stages of mutation as the movie progresses. It reminded me of just how many of these 80's monster movies simply focused on a transformation, someone going through a metamorphosis from human to creature. Joe Dante's The Howling and John Landis's An American Werewolf in London pop to mind. On Metamorphosis: The Alien Factor the transformation was well achieved! We get to see a mass of continually changing muscle and sinew. I thought it was a cool touch how the mutating scientist would spit these little masses of flesh and teeth which mutate on their own. 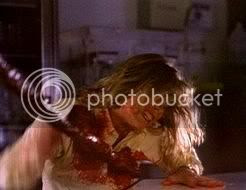 One thing I didn’t get about this movie was why they decide to tell the story through a series of flashbacks. To my understanding, it wasn’t even necessary to do this. But they decided to go with it, tell the whole movie from flashback to flashback. Because of this, we get the story in series of short chapters. On the negative side of things, the dialog was really bad in certain scenes as was the acting from almost everybody! I dare you not to laugh while hearing some of this dialog! Its so incredibly cheesy! The two “teenage girls” (who are obviously NOT teenagers) are the guiltiest of the bad actors on this movie. But who cares, it adds to the charm of this b-movie. 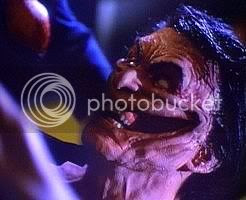 All in all, a fun movie with many make up effects, some bad acting and lots of monsters, miniatures, stop motion animation and gore. It's an amalgamation of filmmaking techniques and a reminder of how films were made back in the day before CGI took over. This is a fun movie to watch. Recommend it to lovers of b-movies with an 80s sensibility to them, its an excellent example of what low budget sci-horror was like during the 80's.