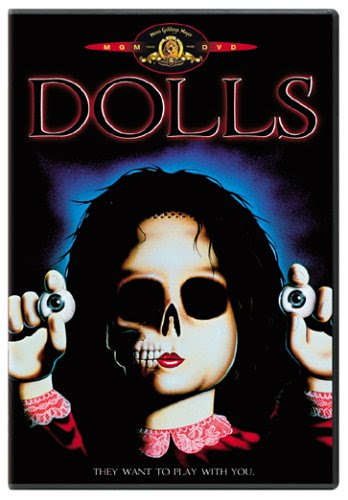 
Stuart Gordon. The name is synonimous with gruesome acts of myrth, gore, violence and other forms of on screen mayhem. Normally his films are loaded with buckets of blood and gore, yet somehow in the middle of all the gory mayhem he manages to maintain a nice level of drama and character development. Here he decided (along with writer Ed Naha) to go a different rout. Something more along the lines of a fairytale. A horror film with a child like sensibility.

The story is about these two rich snobs who go on vacation with their daughter. Along the road they are encountered by a storm that makes their car sink in the mud. So they decide to try and see if they could stay for the night at a nearby old mansion that they see from the road. A few minutes later three other people wonder into the house: Ralph a man who is a child at heart and the two punk rock girls who he gave a lift to. Unbeknownst to them, this is a spooky old mansion that has dolls that come to life. And kill.

Dolls came out around the time in wich killer doll movies were extremely hot in movieland. Stuart Gordon's Dolls was the first in this new batch of killer doll movies. It was released in 1987, one whole year before Childs Play did in 1988. After that in 1989 the Puppet Master series from Full Moon began, and after that Demonic Toys. But just because it was the first of the bunch and because it comes to us from veteran horror director Stuart Gordon, Dolls is worthy of mention. What I like about this movie is that even though it is a low budget production, it doesnt feel like it. Gordon somehow managed to make the film look more expensive then it really was. So kudos for that to Gordon. Right off the bat this movie got some things right. First off we get a real nice setting, perfect for this sort of horror film. Atmosphere is a must, and we get tons of that! There is a storm that never stops through out the whole movie. Its thunder and the lightning through out 90% of the film! We get a huge mansion with dark hallways and rooms filled with creepy looking old dolls and antiques. To top all that we also get two cooky and weird old folks who are the owners of the mansion and also happen to be doll makers. Could they also be sorcerers? Hmm... So as you can see, we get a nice setting for a spooky old fashion film, wich in my opinion is exactly what Dolls is . An old fashion dark fairy tale.

And thats exactly one of the things I liked about this movie. How it emphasized the fact that it was a fairy tale. At one point the old man starts talking about magical nights that go on forever and never stop. That whole conversation right there kind of like gets you in the mood for this kind of film. When a character starts a conversation that way, you just know your in for a spooky old time. Since the movie is about toys that come to life (and kill) its only fitting that we see most of the film through the eyes of Judy, the little girl. And since its told from her point of view, its only fitting that the movie is told in the manner of a fairy tale. What we have here is a nice movie to get your little brothers, cousins, nephews etc. all scared with. Id put in the same category as films like Monster Squad, Invaders from Mars, Troll and The Gate. You know, kiddie horror. And that doesnt lessen to the coolness of the movie for me. This film does manage to be a creepy flick inspite of its child like atmosphere. In fact the movie does manage to squeeze in a gory scene or two in there, just so you dont forget that this is a Stuart Gordon film you are watching.

The special effects are pretty good. Its a mixture between stop motion animation (like the one seen on the Puppet Master movies) and the use of puppets. I think it was very well achieved for a low budget horror flick. Because of the nature of stop motion animation, the dolls end up looking really creepy, specially in one scene where they all suddenly come to life and turn their heads. That scene was priceless for me. All in all, this isnt the type of film youd normally expect from Gordon since it does have a certain innocent charm to it. Its sort of a big departure from his previous gore fests like Re-animator and From Beyond. Those films were drenched in blood and gore. Dolls is not as gory or violent (though it does have its moments) but its creepyness still makes it quite effective. Good thing it is finally out on DVD with a couple of cool extras like a commentary with Stuart Gordon and storyboard to film comparisons. Recommend it for a night of spooky old fashion fun.

Hello!!, I've been trying to email you but it fails to deliver but after seeing you review 'Dolls' the 1987 film i was just wondering if you could help me?. I have had the video for years of that film but as you can imagine it's significantly old and fuzzy now and quality is low (besides Dvd's are cool and 'in' now)!! :p and i am just wondering if you know anywhere i could get it in region 2 on Dvd?, i'm having more problems as i am in England. My email address is shameme.adams@gmail.com
I'de love to hear from you
you film buff!!.
Bye!
Shameme
P.S 'They want to play with you'!!

I dont know if this one is available on region 2 or not, Amazon has it available, but as far as I can see, its only on region 1.