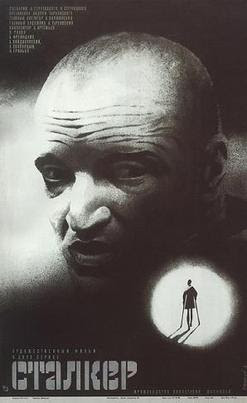 Are you a philosophical person? That’s what you really gotta ask yourself before seeing this movie. If you aren’t, don’t bother skip this review and wonder on to your next film. But if you are one of those brave minds who enjoys diving deeper into the human psyche, into the how and the why and the where of things, then this is a movie for you.

Stalker is the story of a man who guides people to what is referred to in the movie as ' The Zone'. What is 'The Zone' you might ask? Well, supposedly, it’s a place where all your innermost dreams come true. Some say it was an alien spaceship that crash landed there and created the zone, others think it’s a meteorite. Point of the matter is, nobody really knows how The Zone got there or how it came to be. But people have been there, and they have never returned. The main characters of the film are these three guys who are on their way to the zone. One of them is the guide, known as 'The Stalker', he guides the other two. One is a philosopher, a writer always analizing everything and going into philosophical converstations. The other is a Professor, always thinking empirically. Searching for the mathematical and scientific side of things. The Stalker loves the zone, and he loves taking people there, for a price. In a way it could be said that he worships The Zone, he serves it and he has all his faith on it. The film is about what happens on their journey to the zone, and the philosophical conversations that ensue.

I really enjoyed this movie because it addresses many of the mysteries in life. The three are in search of the ever elusive Zone. A mysterious place that will answer all problems, and your wildest dreams will come true. Supposedly in it, you will find true happiness and peace. The Professor and The Writer are always questioning themselves why they are going to the zone. While The Stalker is always trying to convince them that it’s the best thing they could do, that getting there is the most important thing in their lives. Professor and Writer are not so sure of it. They question the need for the zone, they even question its existence.I thought it was a bold film with a heavy message to put across.

Gotta say that not everyone will find this movie interesting or watchable. The film is one of those long slow affairs. Though I will say, if you enjoy a director who takes his time composing a beautiful image, and letting you enjoy it then you will most certainly like this movie. It’s the kind of film that stays focused on an image, on landscapes, on a moment so you can really absorb and transport yourself into the world of the film. Famed German director Werner Herzog (Fitzcarraldo, Aguirre: The Wrath of God) is known for doing this as well. Sometimes the camera focuses so much on a scene that it appears to be a still image, others times scenes feel like moving paintings. I guess it takes a certain level of artistic appreciation in order to enjoy this film. It’s a change of pace from your regular commercial films, where theres always action, special effects or dialog going on. Not so here. In Stalker the director wants you to feel like you are there with these three guys on your trek towards The Zone. Its a very slow paced film, and to top things off, its spoken in Russian, reading subtitles makes things a bit more difficult to grasp. What really matters in this movie is what characters are talking about and the themes they address, it is not a film made to impress with its action. Its more about what its saying.

Most of the film takes place in a forest, and amongst ruins. It appears as if the filmed the whole thing in an abandoned factory or something, cause everything seems destroyed, old, putrid, decaying. Yet all this ugliness can somehow make for beautiful imagery. The colors, the contrasts. Loved that about it. Lots of greys and blacks to accentuate the dull boring lives of the main characters.

Story behind this film is interesting. The director Andrei Tarkovski (who also directed the original Solaris) shot a lot of the film, and then had to burn the footage because he used the wrong kind of film. He almost gave up on the project, but decided not to. So he went and shot the whole film again! Interesting story: a lot of the cast and crew got sick or died after shooting this film. Why? Because they shot in a real abandoned factory, and there were dangerous chemicals which resulted in cast and crew getting cancer. The director himself died of cancer soon after. There were reports of strange bubbles in the water, they later concluded these bubbles were actually chemical waste from a nearby factory.

This movie has guts, and it questions weather humans need religion or not. Can you live without it? Who made it up? Is religion composed of fantasies made up by someone? Should it be eliminated or should it continue? Do some people need it to survive in this harsh world? Does it really give hope? Why do religious leaders decide they have to lead others to it? Like I said, very important issues. Interesting thing about the film is that it addresses these issues from various angles. Everyone gets their time to say what they think: the religious zelot, the philosopher and the scientist. After seeing this film I noticed where films like Cube and Dante 0.1 came from. Highly recommend it if you like visually striking and artistic films, and films with a philosophical angle.

Francisco, can you imagine a conversation between Michael Bay and Andrei Tarkovsky regarding what exactly film-making should be all about ! ?, that would`ve been a doozy ! ! !.

Ha, these two guys are too diametrically opposed to even have a conversation, but it would be interesting to see what to completely different filmmakers would talk about. One completely commercial, one the furthest thing from it.

Hey, thanks for commenting! This was my first review ever and it had never gotten a comment!