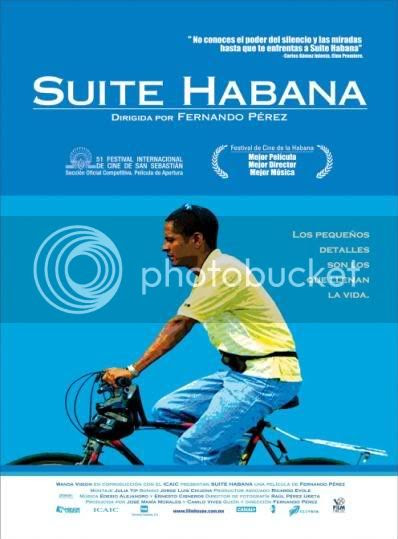 
The focus of this documentary is the everyday life of thirteen real cubans. The documentary follows them around doing their regular every day chores, from getting up in the morning to go to work, to getting off and having dinner, to going to do whatever it is you do after work, to the last moment when you go to sleep. This documentary is a real eye opener to the type of harsh life Cubans live on a day to day basis. Still, its so inspiring to see people thriving and continuing their struggle inspite of the difficulties.

The documentary focuses all its attentions on the city life in Habana. Because of this we can see just how beautiful the city of Habana is. I mean, the architecture in Habana is so beautiful. Its ancient, most of the buildings are falling apart and crumbling, yet still, theres a beauty to it. The director has a real eye for capturing the beauty amongst the decay.

Whats most interesting though is the people the filmakers chose to focus on. Thirteen people from a kid called Francisquito who has down syndrome but is so self reliant that its awe inspiring, to a 97 year old lady who has energies only to watch t.v. all day. We get to see people from all age ranges, we get a 20 something, a 30 something and a 40 something, each going about their daily lives, doing what it is they do to survive. Some work in a factory, others work in construction, and its great to see them going about their labor helping a country survive on a daily basis. But you also get to know who these people are when they go back home, after work. Each of them has a different ability they are good at after work in their leisure time. One is a clown, one is a saxophone player at church, one is a transvestite, one is a professional dancer, they kind of become somebody totally different during the night time, each of them, adding a little bit to their communities on their off time.

The film is shot on video, but the shots and the direction are superb. The director has an eye for beauty, and the lighting in some of the sequences (specially those scenes depicting the Cuban nightlife in Habana) are something truly beautiful to behold.

A word of warning though, this documentary has no dialog whatsoever. Its a completely visual trip. Yet, somehow, without any dialog the film tells its story, it moves you. It gives an emotional resonance by sheer visuals alone. Which is probably why so much attention was put into capturing such beauty through the camera lense.

A real testament to the resilience and beauty of the Cuban people, this film won many award in many film festivals across the world. Highly recommend it to those who want to venture further then the world they live in, see how different other parts of the world are and maybe even make you thankful for the abundance of things we have and take for granted.

Thank you for posting thisss!!!!!!! Everyone should watch this!

Unfortunately, I dont think its availabe on dvd in this part of the world...

really..el maldito bloqueo! es una pena,since i found this doc is really original,and well, it means a lot to me!

Thanks Reina for bringing that documentary directly from Cuba! It was a treasure!