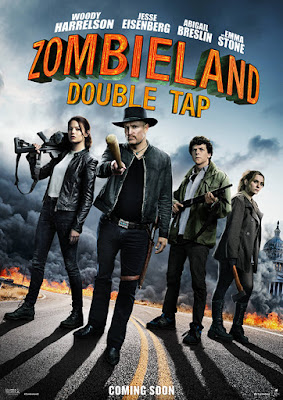 Zombieland: Double Tap (2019)
Director: Ruben Fleisher
Cast: Woody Harrelson, Emma Stone, Jesse Eisenberg and Abigail Breslin, Rosario Dawson, Luke Wilson, Bill Murray
Zombie films have proven to be cyclical. Like the undead beings they portray, the zombie genre is resurrected and disposed of according to the public’s interest or the success of one particular film. Back in the 70’s, thanks to the success of George Romero’s Dawn of the Dead (1978), zombie films made a resurgence. They grew in popularity thanks to all the Italian knock offs that came as a result of Romero’s seminal film. I speak of films like Lucio Fulci’s Zombie (1979) and The Beyond (1983) and a whole slew of Italian zombie films that were released during the 80’s. In America, we saw films like Return of the Living Dead (1985), Day of the Dead (1985), Re-Animator (1985) and Night of the Creeps (1986). In a few years, zombie movies died again and disappeared. During the 90’s, few of them were released in theaters and the ones that did get released were not box office giants. But time passed and in 2002 that all changed, zombie movies were back at the box office and they came back strong! Thanks to box office hits like 28 Days Later (2002), Dawn of the Dead (2004), Shaun of the Dead (2004) and Resident Evil (2002), zombie movies were back in a big way! Zombies even infested our tv screens with shows like the ever popular The Walking Dead, which is still shambling around. 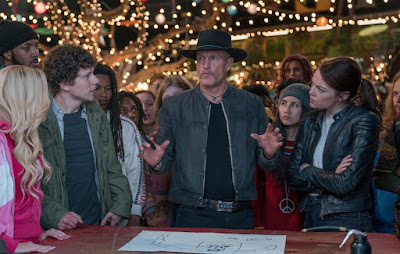 Zombieland (2009) was released around the time when people were still obsessed with zombies. It was a moderate hit, which should have meant a quick sequel. Instead, for whatever the reason, they waited a decade to make it. So now here comes the sequel, a whole decade late. I can definitely say it couldn’t have come at a worse time, because at this point,  people are zombied out. This zombie wave is reaching its end …zombie fatigue is definitely here and it is felt in the lackluster box office performance of Zombieland Double Tap (2019) Yes my friends, my take on Zombieland Double Tap is that it’s a sequel that came about ten years too late. And you know how that goes when you wait too long to do a sequel, people stop caring. If you don’t believe me just see Dumb and Dumber 2 (2014), Zoolander 2 (2016) or any other sequel that waited too damn long to be made. The moment has passed, the magic is gone. I say it’s always a mistake to wait that long. Unless your film is a sequel to a beloved franchise that people can’t get enough off, chances are your long gestating sequel will die a quick death at the box office. 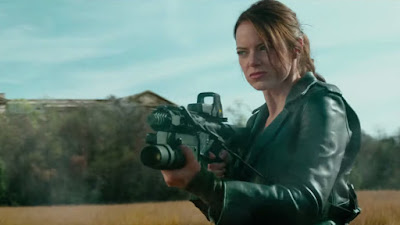 Why make Zombieland 2 now? When people have had their fill of zombies for years? Apparently the filmmakers have their faiths set on the cast, who at this point are all Oscar nominees or winners. Or they think they have an important enough story that it simply has to be told! But quite honestly it doesn’t feel that way at all. In fact, it’s a very silly movie that exists only to make us laugh and giggle, the story is just an excuse for the comedy antics which is fine by me, the only problem for me is that I feel they could have made it funnier. I’m sure a lot of people will find it an unnecessary film. As it is, it's simply a watchable film. 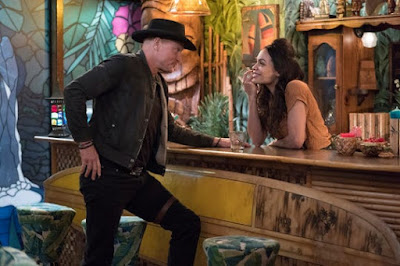 It’s great seeing Harrelson, Eisenberg, Stone and Breslin together again. They still have the chemistry, which is really what saves this movie. It's the script that's weak. And that's a sad story too because apparently they waited this long because they were waiting for the right script or it wasn't going to happen. Let's see how this story goes..it’s been more than ten years since we last saw them and the zombie apocalypse is still going strong with a (wait for it) new strand of zombie that has evolved and become stronger and faster. The team has decided to find their “forever home” and it’s the abandoned white house. The story revolves around rescuing Abigail Breslin’s character, who has decided to run off with a hippy who doesn’t believe in violence. And they decided to go to Graceland, Elvis's home. So off they go to rescue her, along the way they meet a couple of funny characters.

But honestly there’s nothing here you haven’t seen before in other zombie movies. An evolved strand of zombies? Check. The zombie free haven they have to get to by the end of the movie? Check. They even have an entire scene that we’d already seen before in Resident Evil Extinction (2007), so this one doesn’t get any bonus points for originality in terms of zombie antics. I did laugh a few times, but I feel that if the filmmakers knew that they were not bringing anything new to the table in terms of zombie mayhem, then they should have at least amped up the comedy and made it a full on super comedy. I mean, I did like the ditzy dumb blonde girl…and the Tallahassee and Columbus clones…but we needed more slapstick, silly stuff. Problem is that the actors on this film aren’t comedians, they are actors who are in a movie that’s supposed to be funny. The film could have benefited from casting actual comedians in the main roles. Why is it that Hollywood keeps making comedies without comedians? I don’t get that. 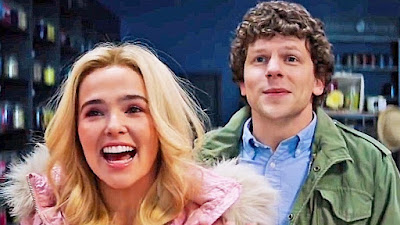 It’s not all bad, while this movie does feel a tad unnecessary, it does have a few things that keep it from being a total waste of your time, like for example, there’s the opening sequence that imitates the opening sequence from the first film. If you remember correctly, the first film opened to slow motion zombie mayhem to the tune of Metallica’s ‘For Whom the Bell Tolls’, on this one they do the same slow motion zombie mayhem thing, but to the tune of Metallica’s ‘Master of Puppets’ which is just perfect,  loved that opening credits sequence.  There’s an after credits scene involving Bill Murray killing zombies, make sure you stay for that. There’s a scene that involves Rosario Dawson driving a monster truck that was pretty freaking sweet. But that’s about it. A fun movie my friends, but nothing you’ll remember after you walk out of the theater. It’s got zombies, but nothing we haven’t seen before. It’s funny, but not super funny. So it’s a very been there done that kind of film, very so-so. I guess the correct word for this one is ‘bland’ and that’s not a good thing for a zombie film to be. So in a way, Zombieland Double Tap has dug its own grave. Bottom line is, we are witnessing the last throes of this cinematic zombie wave. I am currently waiting for Zack Snyder’s Army of the Dead to be released, which to be honest has my full attention, my curiosity is peaked. It looks like that will be the film to determine if we’ll see any more theatrically released zombie films in the coming years. Let’s see where this goes.
Rating: 3 out of 5 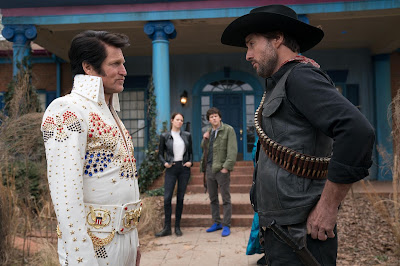