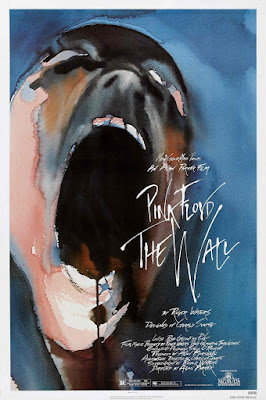 As a film buff, sometimes important movies escape my all scanning, all seeing eyes. Truth is there’s just so much to see; a life time isn’t enough.  So for whatever the reason, probably because I was never really into Pink Floyd’s music, I had never seen Pink Floyd’s The Wall. Man am I kicking myself in the ass for not having seen this one before! This movie is not just a movie, it’s an experience! An audio visual tour de force! 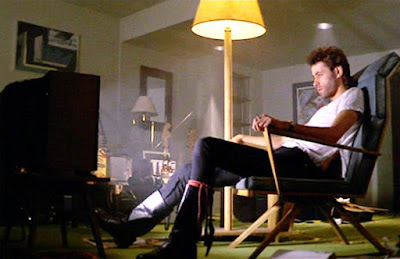 This is the story of ‘Pink’, a young man that’s not to happy about the worlds his born into, we follow him through the different phases in life, so in many ways it’s a life story. In this sense, it is similar to Ken Russell's Tommy (1975), because its also a life story, it's also a critique on society and it's also a film fueled by Rock and Roll. In Pink Floyd's The Wall, we see Pink go from growing up in an abusive and unproductive education system, to becoming comfortably numb through watching television and doing drugs in order to ignore the crazy world that surrounds him. Pink manages to become part of a famous rock band, but even with success nothing makes sense to him. Will he snap and go totally insane? Or will he join the ranks of Big Brother? 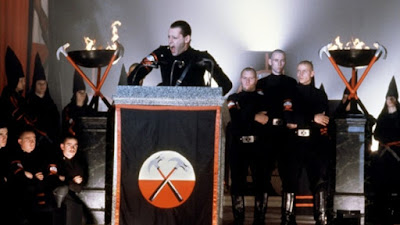 This film is very special, and I’m going to have to ask anyone out there reading that hasn’t experienced this film yet to do so at the earliest possible convenience. I mean, if you love film and the range of emotions and themes that you can express through it, then go on and find a copy of this amazing movie and watch it. It’s a wonderful achievement, an amazing marriage of sight and sound. All gushing aside, what actually makes this film so special? Well, let me count the ways. 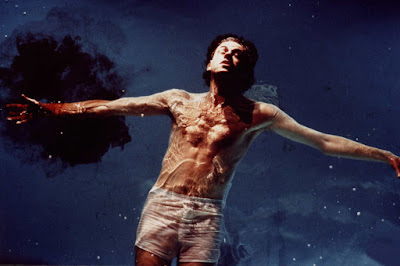 One of the things that stands out about this movie is that it hardly uses any dialog to tell its story. Its main character hardly utters a word throughout the entire film! Other characters around him speak, but Pink himself remains with his lips sealed for most of the film, even though a lot seems to be going on inside of him. Yet, what he doesn’t say through words, he conveys through facial expressions, through performance and through action. Like Chaplin, here’s a character that says a lot without saying a word! Pink is a guy that has grown sick of the mind numbing stupidity that society occupies itself with. He hates television, the dumb masses, he hates money, war, material things, Pink basically dislikes everything he sees. Where will this abhorring of the world take him? Bob Geldof’s performance is a good one; a lot is conveyed through performance, which to me is one of the films major achievements. This films modus operandi is “a picture speaks louder than a thousand words”. And boy, the imagery we see on this film truly speaks for itself! 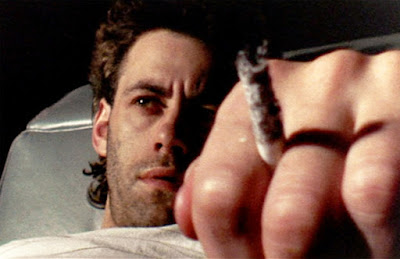 In order to tell their story through surrealistic, symbolic images, the filmmakers put a lot of effort into marrying the perfect images with the lyrics to Pink Floyd’s songs, which are just amazing. Songs and images gel together so perfectly here! The songs are every bit as subversive as the visuals, which hold nothing back, these songs tell a story. I mean, here’s a movie that tells us that today’s education system treats students like meat to a grinder…every student grinded into one same piece of meat, without anything to make them individuals, without uniqueness. Here’s a film that says that television can drive you mad, that war is death, that bad parents are something to drive us mad, that we will eventually turn into a piece of the machinery, into another senseless clone.  Here’s a film unafraid to say that governments can turn into fascist regimes, basically, this is a movie without any filters or restraints. Yet it says everything so artistically, with such emotion and intensity. It’s impossible to ignore it, or the truth within it. 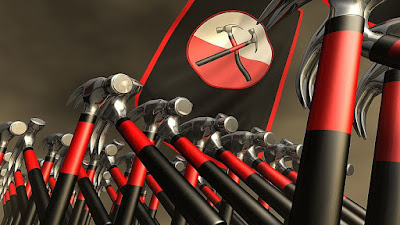 The talent in the film is obviously a huge part of what makes it such a wonder to behold. Here we have Alan Parker in the director’s chair; a director whose films have always been thematically strong, like a punch to the gut. If you don’t believe me then go and watch Midnight Express (1978). Watching that movie for the first time is like getting a bucket of ice cold water poured down your back! I dare you not to be inspired by Parker’s Fame (1980), or be freaked out by Robert Deniro’s Satan in Parker’s satanic thriller, Angel Heart (1987). Point is that Pink Floyd’s The Wall has an excellent director behind it, which is probably why the visuals are so memorable. But then again, Pink Floyd has always been a band who pays as much attention to their music videos as they do to their songs; their music videos are always a joy to watch. The film was written by Pink Floyd’s own Roger Waters, but the basic jist of the film is that the songs from their conceptual album ‘The Wall’ are the driving force behind the plot of the film. These songs tell us the story of a young man in disgust with society, and the songs are truly special, and this comes from a new fan. Thanks to this film, I am now a Pink Floyd convert/fan, the same thing might happen to you if you’ve never been a fan of Pink Floyd. I dare you not to have some sort of emotional reaction to the images that accompany the song ‘Comfortably Numb’, one of Pink Floyd’s biggest hits. With this song, the film also comments on the sometimes nightmarish lifestyle of a rock and roll star, as if the film wasn’t already commenting enough. And yet another great element in the film are Gerald Scarfe’s amazing animated sequences, which are mind blowing! This movie wouldn’t be the same without Scarfe’s imaginative animation, it is an integral part of the equation. Scarfe’s animation is so fantastic that various sequences, like the hammers marching, the teacher grinding the students into a meat grinder, or that screaming face emerging out of the brick wall have all become part of this films iconic imagery. So what we have here my friends, is a nonstop onslaught of talent. This is definitely one of the movies you should see before you croke, put it on your must watch list, you won’t regret it.

That film scared the living shit out of me when I was a kid. I was really freaking out.

It does present a dark picture of the world for a child! The crazy things we see sometimes when we are kids! My dad took me to see Dawn of the Dead (1979) when I was four, scared the living shit outta me! But now I thank him cause I saw that classic when it was first released!

Oh yeah, from what I hear, Pink's story reflects a bit of Syd Barrett's personal story. Barret dealt with mental health issues and that was one of the reasons why he departed the band. Some of Pinks actions reflect Barrett's, like that of shaving every hair on his body.

I didn't know that.