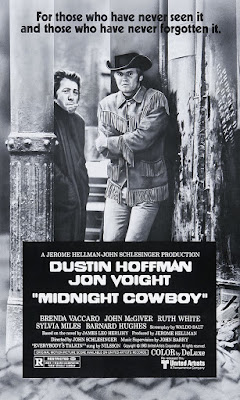 Midnight Cowboy is a fish out of water story about a young Texan dishwasher who decides he wants something more out of life so he packs up his bags, gets on a bus and heads towards big bad New York City. The problem is that his big plans for a better life strive entirely on hustling in the world of male prostitution. And further complicating matters, Buck isn’t really much of a hustler, in fact, he’s one hundred and one percent naïve, which means, in a city like New York, he is the one who’s going to get hustled. So it’s that kind of a story in which an innocent person is confronted with a bizarre and violent world, which will transform him forever. 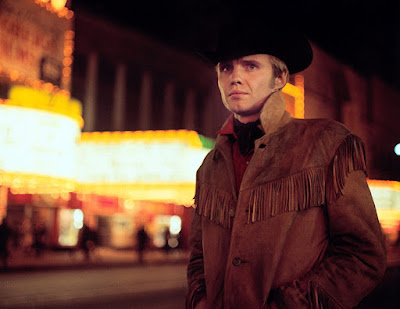 Usually the first thing you do when you arrive to a new place is make new acquaintances and hopefully, find a kind soul which you can befriend, someone who will show you the ropes. In the case of young and naïve Joe Buck, as soon as he arrives to New York, he connects with a guy whom people call ‘Ratso Rizzo’, a name that would’ve raised a couple of red flags under my radar, but Buck is so naïve he becomes best friends with Rizzo. This ultimate naiveté is what drives the whole story; Buck’s innocence is pitted against Razzo’s experienced hustler ways. These opposite personalities create some very interesting and entertaining situations, for example, the party scene in which they are both randomly invited to one of these crazy swinging parties from the 60’s, where people are doing all sorts of drugs,   dancing naked and fucking. I got flashbacks from a similar scene in Beyond the Valley of the Dolls (1970). There was something about movies from the 60’s; they always had these groovy party sequences. Lots of psychedelic images, like some sort of acid trip, nothing makes sense! Someone’s always smoking weed, there’s always trippy music. Anyways, it’s interesting to see both characters getting lost in all that craziness. Will Joe Buck survive all that insanity? Will he become corrupted somehow? Or has he finally found his place? 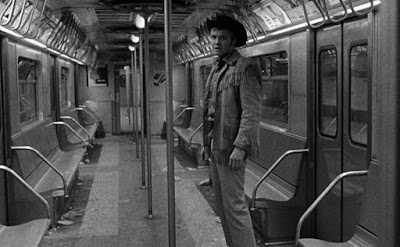 At the crux of it all, are these two guys helping each other under such dire living circumstances.  And they are truly dire, I mean, these guys are so dirt poor that they live in an abandoned building in New York City, with a million rats and the roaches as their roommates. Dinner is canned soup. And there’s always that question of, are they attracted to each other? Is there something else going on here? I love how the film hints at it, but never truly answers that question. The strongest part about the film are the performances by its two main actors, Jon Voight as Joe Buck the innocent manwhore with a heart of gold and Dustin Hoffman’s Rizzo, the scummiest dirt bag in town. They both portray their characters to perfection. This without a doubt is one of Dustin Hoffman’s most memorable performances, I’m sure it’s one of his top five. It’s in this film he gave us that famous line “I’m walking here!” a line that some say was improvised by Hoffman because that cab that almost hits him on that scene was a real New York cab, because they were filming that scene live, on the streets, without the proper permissions. Hoffman’s performance is so good, you actually feel empathy for Rizzo, a low street hustler who owes money to everybody and will lie through his teeth for a twenty dollar bill. Yet, by the films end you will feel something for the guy. For both of them actually, but what’s beautiful about this movie is that they both grow to become family, a true friendship develops. 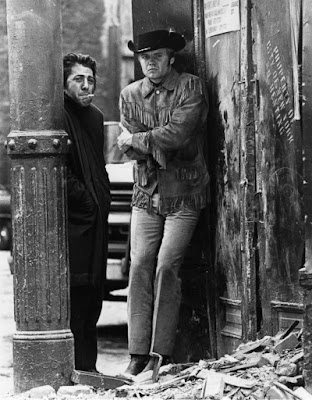 Interesting thing about this movie is that it was rated X. I’m pretty sure it’s because of all the sexual themes. I mean, Joe Buck does become a bisexual, but only out of necessity, he doesn’t seem to enjoy being with men, he just needs the money. There is some nudity, but nothing that I’d say would garner an X rating, so I’m thinking it was the subject manner and the conservative mentality of the time that got this movie the dreaded ‘X’ rating, which is something that any studio fears because getting an ‘X’ rating means death at the box office. Yet even with its X rating the film went on to become the first and only film with an X rating to win academy awards! Actually, it won three, Best Picture, Best Director and Best Adapted Screenplay! Right now it is not an X rated film, in 1971 they the MPAA changed it to an R, without changing a thing about it. 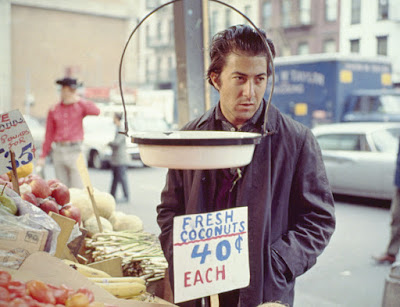 Bottom line is, you should watch this film because it’s a real American Classic. It truly captures the city of New York thanks to some amazing photography and the fact that they had the fortune of being able to film in the actual city of New York, which is something a lot of films are faking these days because its so expensive to film there. So those are real New York City taxi cabs about to run over Dustin Hoffman! Those are real scummy, 1970’s New York City streets! The film has amazing performances from both its protagonists and it’s a film about true friendship. John Schlesinger purposely left out any sexual complications between Buck and Rizzo in order to make a film about two guys who end up becoming the best of friends, without any sexual ties. These are just two dudes who decide to support each other in the middle of this messed up world, in the middle of the darkness true friendship blossoms. But can friendship eclipse the darkness in our lives? The film asks the question: can we make our lives better, even when we’ve been dealt a dark hand in life? Can we out of sheer will power and positive thinking change the course of our lives? Or are some of us so far down the rabbit hole that there’s no way out no matter how much we try?
Rating: 5 out of 5 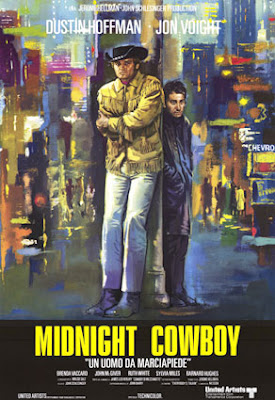 Angelina Jolies dad, 6 years before she was even born, incredible.

"Captain America: Civil War" is already being hailed as a masterpiece, looking forward to your reveiw Francisco.

Yeah this was Voight in his prime, also expect my review for Civil War as soonas its out. cant wait to see it, it looks so damn good.

Civil War might be a player, but Ben Afleck as Batman is a true pimp.