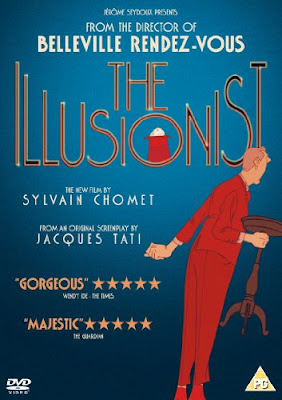 Sylvain Chomet is a very special animator that all lovers of traditional hand drawn animation should be exposed to. His style is so unique, it’s a true delight to watch. The first time I was exposed to his work was while organizing a short film festival. I was looking for some of the best short films ever made and upon my research I stumbled upon a 25 minute animated short film entitled The Old Lady and the Pigeons (1997). This short film won many awards when it was released and it’s not without merit, the short film is a wonder of animation, beautiful, grotesque and nightmarish at the same time! And this is a short film about an old lady who goes to the park every day to feed pigeons! Search it out on you tube, you won’t be disappointed! So anyways, the short film was a hit on my short film festival, people clapped and cheered at it. So of course, I searched for Chomet’s other films. I had to see this wonderful animator’s whole body of work. 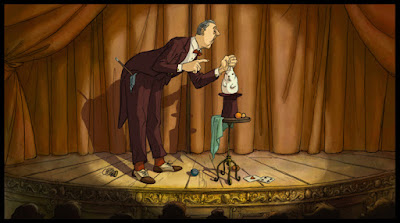 This is how I came upon The Triplets of Bellville (2003). I wasn’t expecting to get my mind blown by a film about a grandmother who trains her grandson to become a world class cyclist, but there I was entranced by the awesome mix of visuals and sound. The thing about Chomet’s films is that the unique visual style of his drawings will keep your eyes glued, but so will the sounds and the absence of dialog. To Chomet, actions speak louder than words. We get sounds, we get music, but when someone speaks, it won’t be often, and usually it will sound like a language you might know, but it will more than likely be a muffled sound sounding like language, meant to transmit an idea, an emotion. Kind of like when Charlie Chaplin speaks gibberish in Modern Times (1936)? Or how he speaks "German" in The Great Dictator (1940)? You swear Chaplin's speaking in a known language, but he’s actually speaking gibberish? Like that. This is how language works in a Chomet film, which makes for an amazingly unique audio visual experience. I was very impressed by The Triplets of Bellville, which is why I was delighted to discover he had one more film in his animated repertoire: The Illusionist (2010), the film I’ll be talking about today. 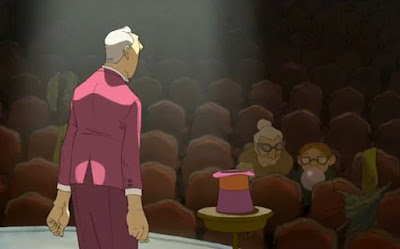 The Illusionist tells the tale of an aging Illusionist who is on the verge of becoming passé, his act has become old hat, replaced by young rock and roll groups. So he decides to travel the country, searching for new venues that will appreciate his particular talent. So he travels to Edinburgh where he finds a variety of venues that give him a job, but basically, he’s a lonely guy living from gig to gig. On one of his venues, he meets this young woman whom he immediately befriends. She is extremely poor, so he decides to buy her a pair of shoes. She immediately becomes attached to the Illusionist and decides to become his traveling companion. He on the other hands becomes her protector and provider, so they become friends. But questions immediately arise, she’s a young woman, and he’s an older fellow. What are his intentions with her? Is he merely interesting in helping the girl? Is he in love with her? Is she in love with him? Is it a platonic thing? Is he just a Good Samaritan? 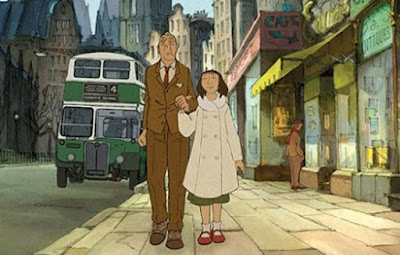 The Triplets of Bellville (2003) was such an exhilarating experience, a nonstop barrage of amazement, such a tour de force of animation that of course my expectations for The Illusionist were extremely high. And while The Illusionist does deliver in many ways, mostly with its visuals and over all ambiance and feeling…sadly it fails to deliver a film with substance to it. It feels like it could have worked better as a short film rather than a 90 minute film. The story is just too thin, not enough happens, to justify a full length picture. But putting aside my desires for a slightly more complex story, there’s still a lot to be enjoyed here. I mean, Chomet manages to capture Edinburgh, he makes it magical. He does something with its localization that not a lot of movies can do: it makes you want to live there. This has happened to me with some Hayao Miyazaki films, like Ponyo (2008), were I felt like I living in that little town by the sea. Well, the same thing happened to me with The Illusionist (2010). It made me want to live in this easy going, magical looking city. But yeah, that’s about all this film has to offer, the beautiful art work and animation, which I still enjoyed to the max. I mean, any love of traditional hand drawn animation will have a feast here. 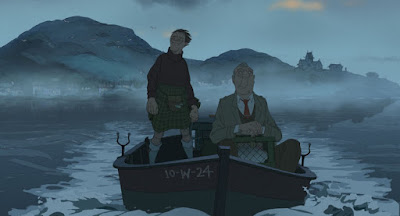 Ultimately, this is a film to be enjoyed from a purely visual perspective, it’s meant to be enjoyed simply as a visual treat, because there’s not a lot of mental stimulation, not a lot of meat with the potatoes. Sure the film does address certain themes, like when do we become obsolete? Should we adapt to the changing times? What is platonic love? But it’s all touched upon lightly, this film is more about absorbing visuals, feelings, emotions and the beautiful artistry with which the visuals were brought to life. But if I was to recommend a Sylvain Chomet film, one that would really blow you away, it would be The Triplets of Bellville (2003), it’s the superior of the two. Chomet went on to direct live action films as well, but I’ve yet to dive into those. Last words on The Illusionist (2010), it’s purely style over substance, but oh what style! 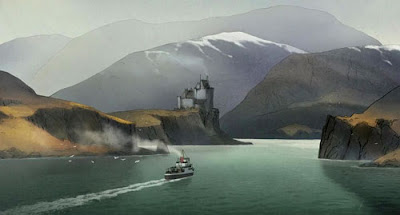 I'm a huge fan of hand drawn animation. I love 2D at it's finest. Modern 3D animation with bullshit stories and zero soul makes me appreciate hand drawn features even more. We used to take these things for granted back in the days. The Illusionist was terrific. The story was great and it felt very sincere.