Who is The Film Connoisseur? 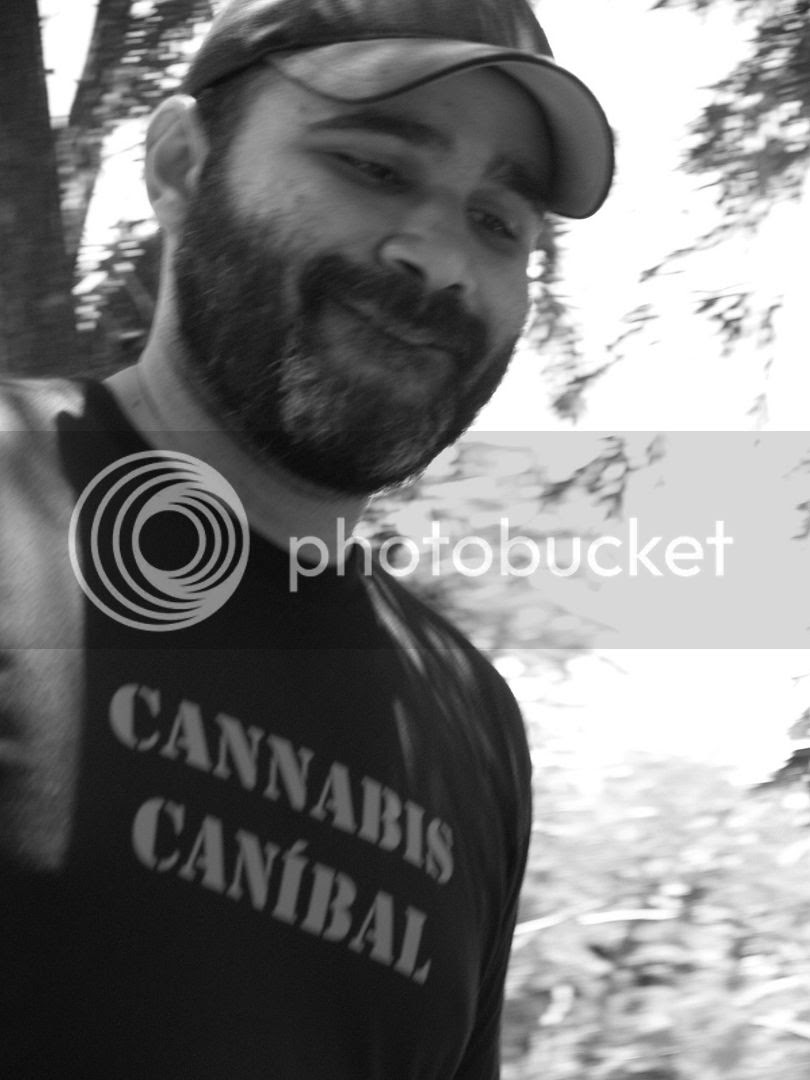 The Film Connoisseur himself, Francisco Gonzalez
Hello to all my readers out there! I’m happy to see the blog steadily growing in readership! We now have 77 readers! I will continue writing movie reviews for as long as I can, and keep this blog running, with interesting articles and movie reviews for your reading enjoyment. We've had more than 150 posts so far! I hope you haven’t gotten to bored with my reviews and articles up to this point, and if you have any suggestions or comments, let me know below with a comment, or write me an e-mail and let me know how this blog can improve. I want to know how I can keep you guys happy! Thanks to all the regular readers, those who comment and read on a regular basis: I salute you!
I thought Id take the opportunity to let you guys know a little bit about who I am, and what I do when I’m not blogging. I have a regular job just like the next guy, but whenever I’m not earning my paycheck, I’m making movies. I enjoy writing and directing my own films. I had been making short films ever since I was about 11 or 12. Getting my two brothers to be on them, hell, I even got my grandmother to appear in one of them! Time went buy, and my love for films never died. I watched movies voraciously, learning as much as I could about he process. So I decided to jump into it full scale. For the last 5 years I have been involved in making my independently financed films. Both writing and directing.
I have made to full length features. The first one, Cannabis Cannibal, is a film about four regular dopes who have to suddenly face the ever growing zombie threat. Its about those first few moments when you find out the world is being overrun by zombies. Then we made the sequel, Cannabis Cannibal Exodus, which was a bit more epic in scale. The zombies have taken over the island of Puerto Rico, and our four protagonists have to escape the island before the government blows it up with nukes. I live in Puerto Rico (that’s a small Island on the Caribbean) so I make my movies in Spanish, for a Puerto Rican audience, but non the less, I thought you guys might find it interesting to know a bit about the movies we make. I say “we” because filmmaking is truly a collaborative effort, and I recognize this whole heartedly. A day after we shot on this location, The Men Who Stare at Goats shot some scenes on this location as well! Ewan McGregor and George Clooney were running about on the same location we shot our little film in!
Both films were met with the audiences approval, people went to see them both, the last one (Exodus) was actually premiered in a movie theater! It was one of the coolest days of my life to see an audience laughing and enjoying our film.
My films are very low budget productions, we have no pretentions. We know we are “guerilla” style, we know we make a film with very little. And until a producer comes along and gives us a couple of million dollars, we keep making our films our own way. A handy cam, lots of natural light and lots of friends for actors and crew. That’s basically it. But the end results are surprisingly entertaining. And no matter how low budget it is, our films are still just that. Films. They tell a story, they might be low budget, but they are a mirror of what we live through in our lives. It’s an artistic representation of ourselves through art. Plus we have a blast making them as well. We entertain each other. 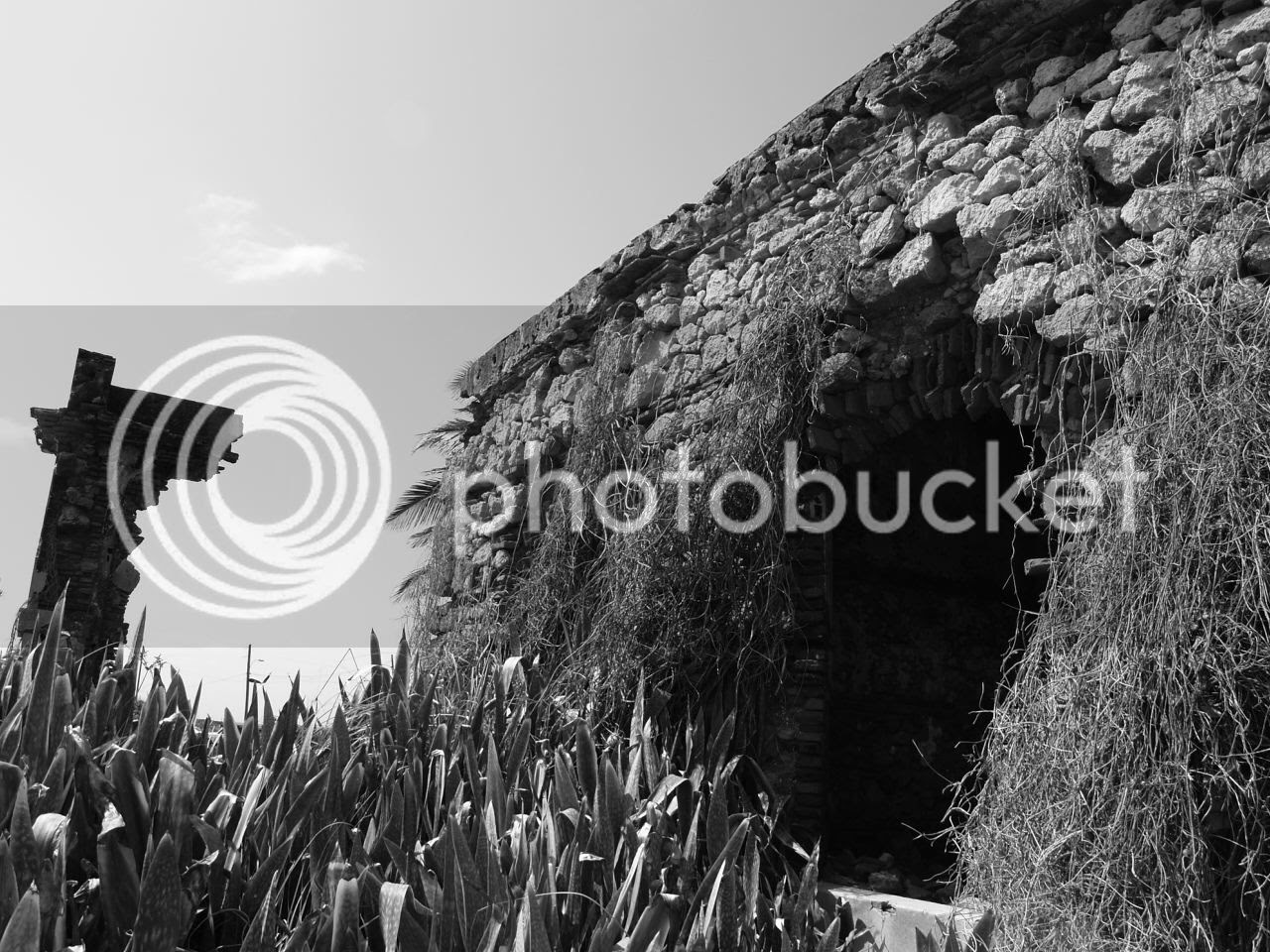 We used an old abandoned hospital to make the world look post-apocalyptic.
Since we don’t have money to build sets or anything, we choose our locations carefully, making sure we can maximize the illusion we are trying to create. For example, our last movie was a post apocalyptic one, but we simply shot in really messed up neighborhoods and made it look like it was the end of the world. We shoot on a little digital camera, and used lots of improvisation. We stick to the script, but also like to keep things spontaneous and fresh. As a result, dialog doesn’t feel mechanical, or rehearsed. Well, at least not all the time. 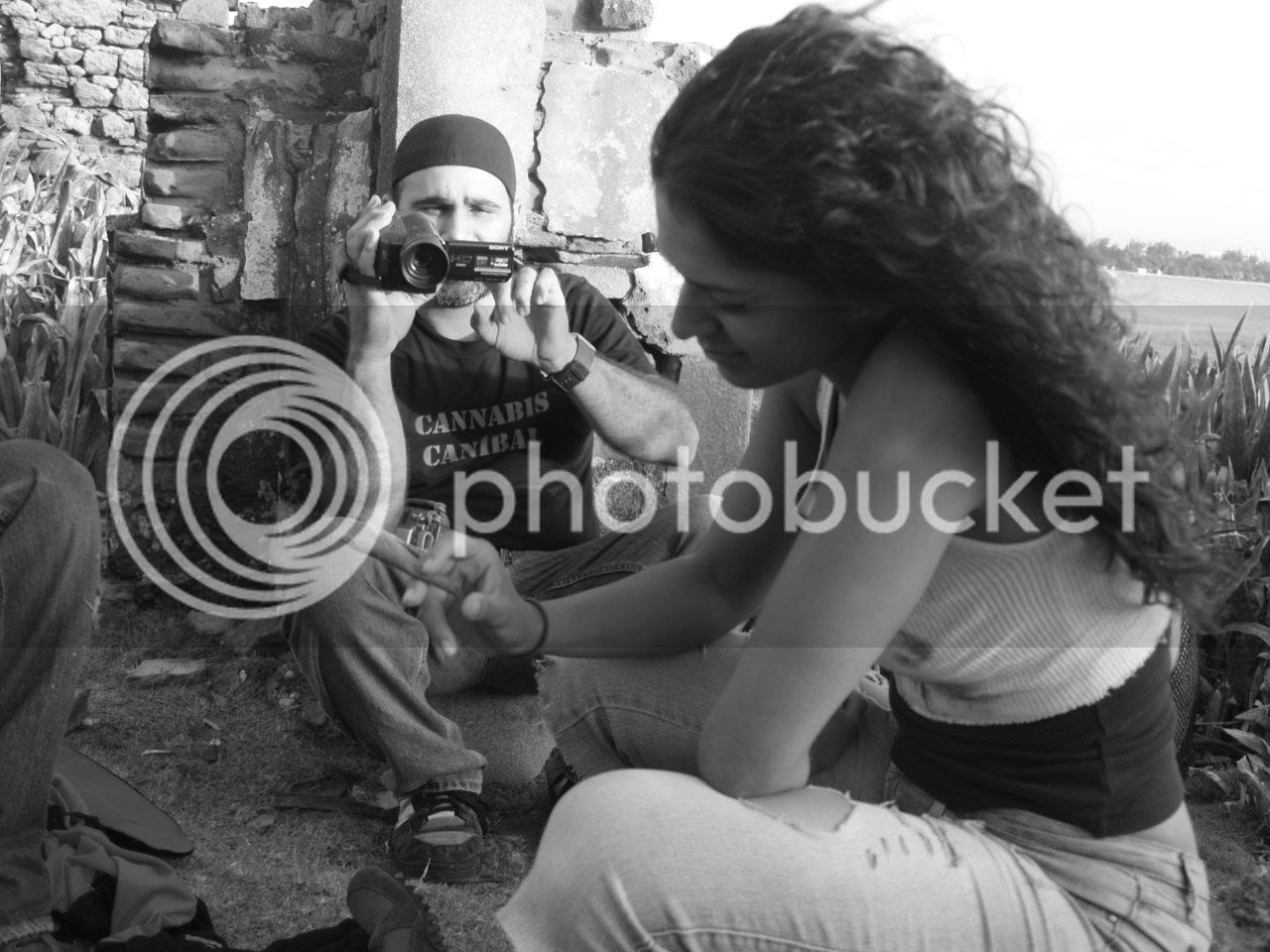 Shooting a scene with Puerto Rican actress, Joealis Santiago Filipetti. Thats me with my camara in hand!
I’m currently working on my next feature film, it will be called “Rio Piedras Mon Amour” and it will be about a cook who suddenly faces himself with the fact that he is job less, and doesn’t know what to do with his life. All that within the background of a country in chaos. The people in rebellion, strikes, government abuse and religion. Its gonna be kind of heavy thematically, but as you guys already know if you’ve been reading my blog, I love films that actually say something as opposed to empty, hollow films. 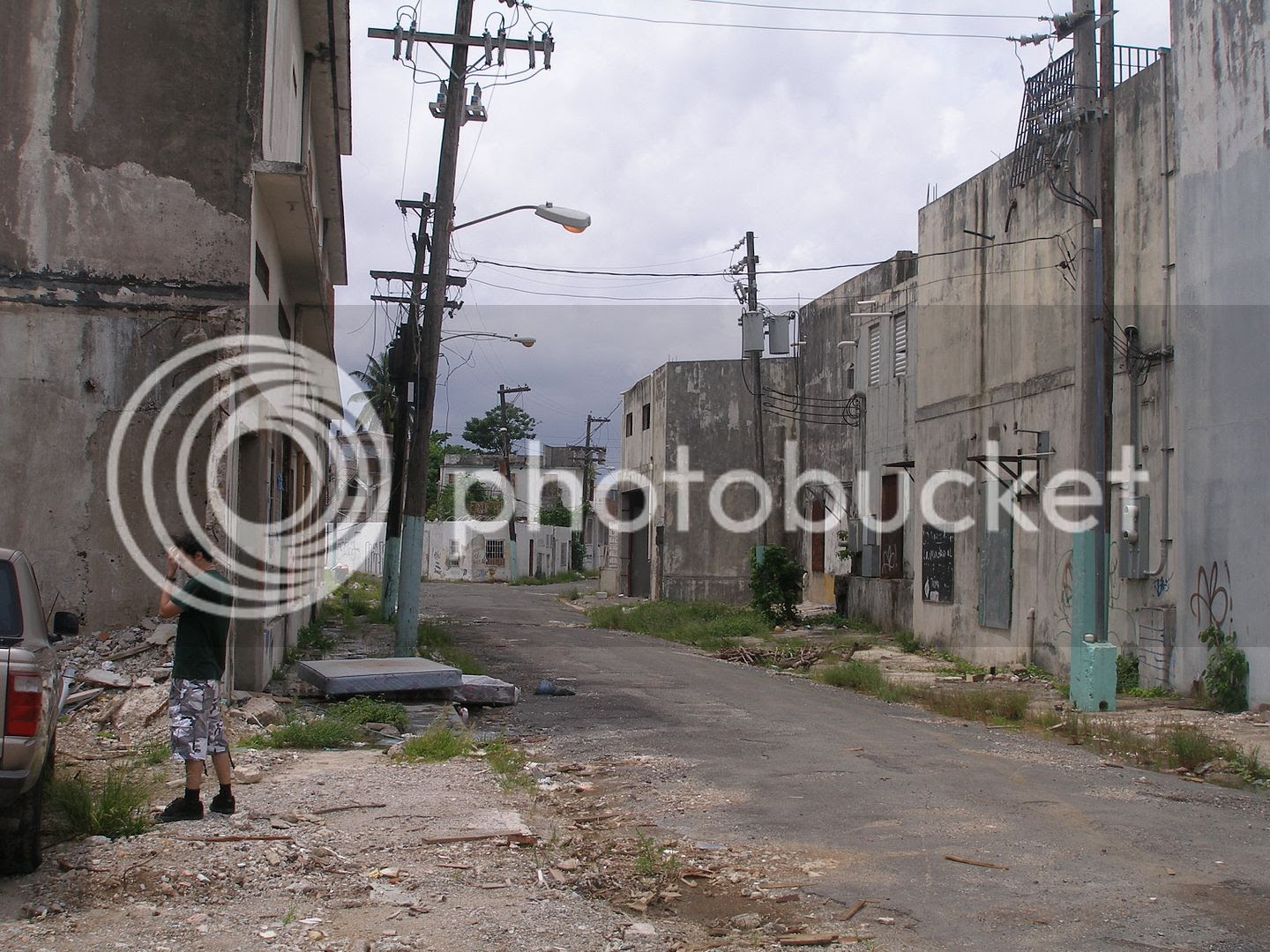 Didnt even have to build any sets to make the world look post apocalyptic!
On the side, I’m also working on a film called “Fase Delta” (Delta Phase) which is an anthology film made by three different directors…one of them is me. All three stories are focused on one theme: Insomnia. I’m currently shooting my half of the film, which will be a 15-20 minute short film about a guy who cant sleep because he is having nightmares about cops hitting people, and people in strikes, screaming and fighting and complaining…he is alone in his room during a stormy night. When the lights go out due to a power failure the main character will receive a visit from a very special individual. I should be over with the filming this week end. Wish me luck.
So anyways, just thought Id let you guys know a bit about who I am, plus it gives me a chance to post some pics of our filmmaking adventures!
As far as this blog goes, stick around, there are lots of good things coming along for readers of The Film Connoisseur. Next Monday we will begin a count down. It will be a a very special countdown done in collaboration between The Film Connoisseur and another blog that will be revealed on Monday! So be on the look out for that starting next week!
Again, thanks for the continued support to The Film Connoisseur! As Stan Lee -founder of Marvel Comics- has been known to say: “Ill keep writing, if you keep reading!”
Francisco Gonzalez
The Film Connoisseur
Posted by Franco Macabro at 4/22/2010 10:05:00 AM

Email ThisBlogThis!Share to TwitterShare to FacebookShare to Pinterest
Labels: The Film Connoisseur

Good luck with the film career and I hope one day I get the opportunity to both view and review your cinematic efforts.

@Mr. Fiendish: I think we should start shooting around the summer, Ill let you know if I have anything for you Beto!

@Shaun: Thanks Shaun, my biggest effort is yet to come, I want to make this new one my best one yet. Im gonna shoot it over the summer, Ill send you a copy as soon as its over with. But just remember its in spanish, Ive thought of doing one version of the film with subtitles, but Ill cross that river when I get to it.

Thanks for the continued support!

Keep up the great kick-ass work on the blog, and best of luck with the career.

you are doing a great job with ur blog. Altough i'm half a world away from Puerto Rico, maybe one day i'll come to visit you in your set :)

Great stuff Francisco - keep up the good work! Hope to be able to check out your film work some day. Love those photos too - post apocalyptic indeed!

Thanks for taking the time to write this awesome little Franco window! I consider you a friend man, so its great getting to know you outside of just the reviews. Wish you only the best of luck with the continued filmmaking, I cant even tell you how jealous I am that you get to live out your passions daily!

Great to learn more about you. I have been meaning to ask you if there is anyway to view any of the movies you have made. Are you going to post them on the blog or through YouTube maybe? Also, if you want any advertisement for any of your movies, please feel free to ask me. I would be happy to post something on my blog for you.

Here here. Keep up the amazing work Francisco. I love your writing style and insights. And best of luck in your movie making career.

Thanks to everyone for the feedback!

@James: Thanks James, Im currently working on something, I hope that I will be able to sell copies of the DVD through this blog at some point. Ill keep you guys posted!

@Carl: Thanks for the kind words man! Im a regular "working class hero" but on the night time: Im a full time filmmaker! You know how it is, work to pay the bills, live to do what you love! Thats how I roll!

@Horro: There is a link to an interview they did to my cast and crew (and me) right here at the premiere of my movie, check it out its in spanish! But in the video you can actually see the people seeing the movie inside the theater! Im the guy with the black jacket and the hat.

Thanks Venom5, I just thought it would be cool to let you guys know who it is that writes all these reviews and articles, you know, so I wont be a complete stranger to you guys.