DVD extras are something very common in todays market. Todays dvd's usually include special features that reveal all the juicy details of how the movie was made, from the outtakes and bloopers, to what the cast had for lunch as they filmed, these edited scenes are part of what makes DVD extras special. These deleted scenes can be cut from a film for various reasons but still make for an entertaining watch. Today, studios will always include them as an extra, but there was a time when it wasnt like this. 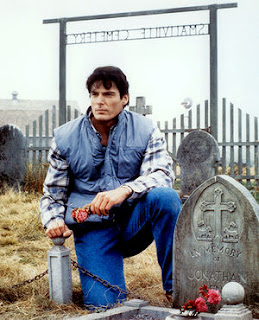 A Deleted Scene from Superman IV: The Quest for Peace in which Clark Kent visits his fathers grave. 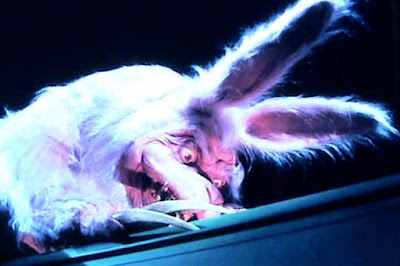 Bill and Teds Bogus Journey (1991)- This is one of the best examples of deleted scenes that not many have seen. If you remember correctly, on this movie Bill and Ted end up going to hell and reliving some of their worst nightmares. Bill faces a Granny that he hated, Ted faces the easter bunny, which wants to make him pay for having stolen his brothers easter basket! And both of them face a Lt. in a military school that makes them do infinity push ups! But soon after, Bill and Ted escape Hell and we never see these nightmares again.

But, it wasnt always meant to be this way. At one point in the film, after they go and buy supplies to make the "good robot us's" evil Bill and evil Ted find a way to capture these nightmares on these containers and unleash them once again on the good Bill and Ted. So, on their way to the battle of the bands an awesome thing happens! The easter bunny attacks them again and rips the vans roof clean off! When Bill and Ted's get off the van they realize they have to face once again their nightmares! The bunny, the granny and the Lieutenant! 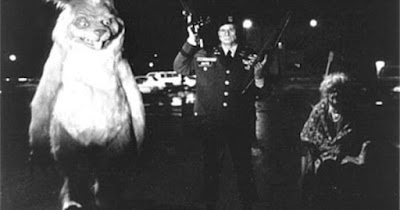 These deleted scenes are pretty cool and were probably deleted simply because they were deamed too scary by the producers, and they wanted to market this one to kids and teenagers. You know this one was being marketed towards kids because they had a Bill and Ted Saturday cartoon show, and a comic book adaptation of the movie, which was actually a decent comic adaptation, and includes all these deleted scenes that Im showing you right here. Marvel Comics even did a regular monthly comic book based on Bill and Teds adventures called Bill and Teds Excellent Comic Book. Heres the cover of the comic book adaptation which I highly recommend: 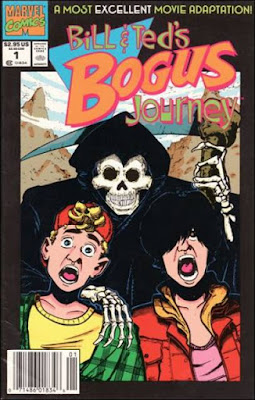 And this is a cover of the Bill and Teds Bogus Journey Comic Book Adaptation (which I am a proud owner of!)

And here are some pics of the deleted scenes: 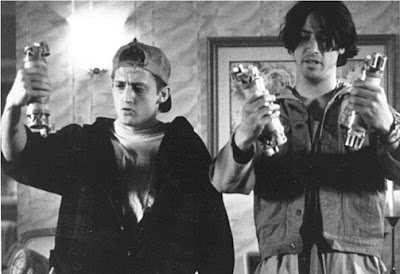 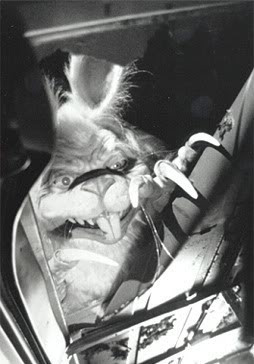 The Giant Easter Bunny Stikes! Looking at this giant demonic bunny makes me wish it had not been cut out of the film! 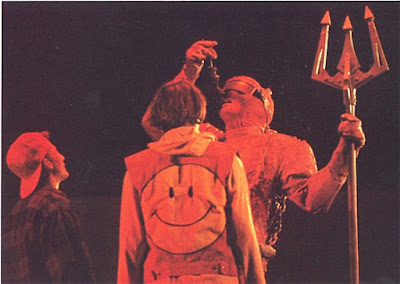 An extra deleted scene has Bill and Ted in Hell. Satan has them chopping up rocks with a sledgehammer and they kind of like it! Suddenly, a demon stands next to them and eats a rat! Yet they dont find it repulsive, the actually find it cool, and they ask him to do it again! You can get a glimpse of this deleted scene on the films official trailer. Superman IV: The Quest for Peace (1987) - Okay, we all know that this movie is literally one of the worst movies ever made, with some of the worst dialog and situations. Can you believe this movie was actually worse then it ended up being? Heres  what got cut out of the film: The Nuclear Man we see in the film was actually the second version of the Nuclear Man, a Bizarro of sorts. A failed experiment. But, to test him out, Lex sends him to kill Superman. Supes and the first Nuclear Man, face off outside of a night club of all places. Check out the pics to see just how painful this scene could have been: 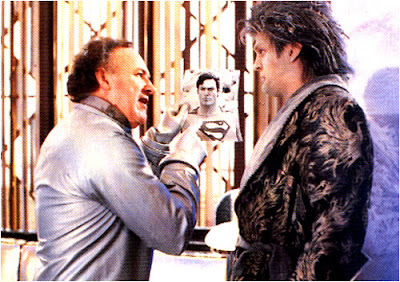 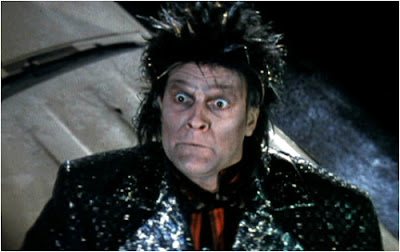 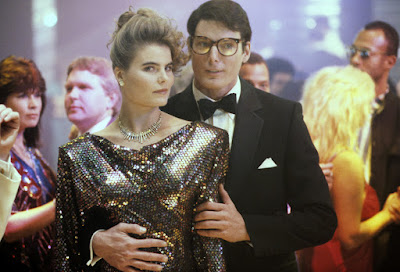 Meanwhile, Clark Kent is dancing the night away at a nearby nightclub 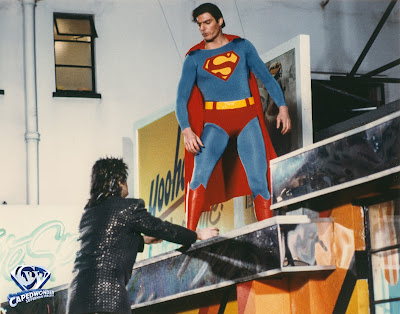 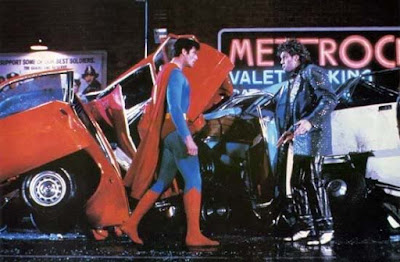 Pretty soon, Nuclear Man and Superman face off outside the nightclub 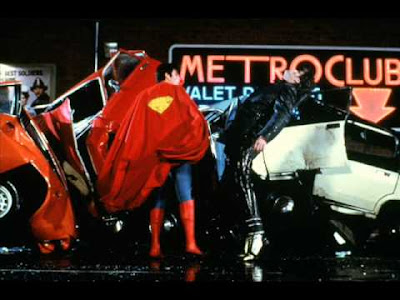 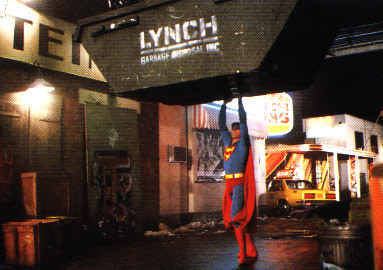 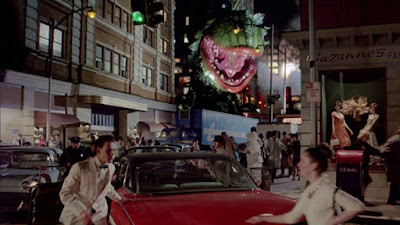 Little Shop of Horrors (1986) - This film had an awesome finale which the studio decided to chop the hell out because it was commenting on consumerism, and they dont like it when a movie does that, because, you know, they want you to consume things in mass quantities. Also, because its a downer of an ending where all the good guys die! And test audiences rejected that ending, the studio does whatever test audiences tell them to do, so the 5 million dollar original ending was exorcised. But essentially, this original ending had Audrey II killing everybody and taking over the city. Basically, Audrey II and its offspring destroy the city King Kong style! Audrey II even manages to crawl on top of the statue of liberty! You should see this original ending on You Tube or something, it shows Audrey II eating a whole freaking train! Plus, they scene is accompanied by a whole new song that never made it to the movie entitled "The Meek Shall Inherit (Dont Feed the Plants!)". Warner Bros. actually released these deleted scenes on a DVD that they released in 1998, but Geffen the films producers was angered by this because he wanted to release the movie in theaters again, with its original 23 minute long ending. So Geffen made Warner Bros. pick up all of the DVDs that included the original ending off from the shelves! So if you have that copy, consider yourself one of the lucky few! 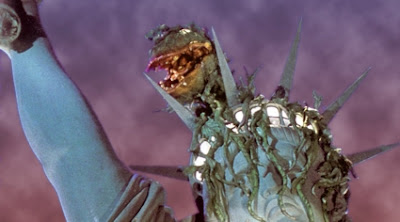 Audrey II on top of the statue of liberty! 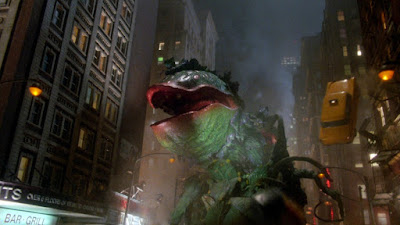 Audrey II and its offspring on a rampage through New York City streets! 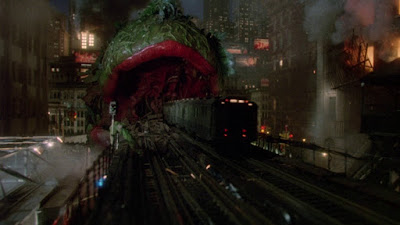 
Jason Goes to Hell: The Final Friday (1993) - So you guys know how this film is all about Jason being a sguiggly little slimy critter/demon thing that jumps from body to body and that's why he keeps popping up in every film again and again. Well, there was going to be a scene in which we see Jason's true demonic form, but for some unholy reason hollywood execs thought it would be a good idea to delete this scene right out of the movie? Why? I'm thinking they thought it would mess too much with the whole Jason Voohees mythology or something. But man, what a sight it would've been to say Jason this way! Also, when Jason gets taken back to hell, we were supposed to see more tree demons that were also deleted. Bummer cause these scenes look sooo cool! Here's hoping one day we might get a directors cut of the film! 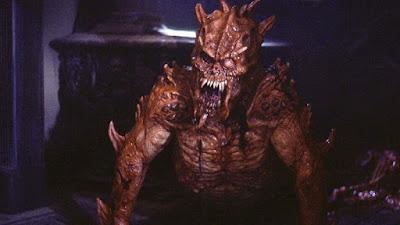 This would have been Jason's true demonic form! 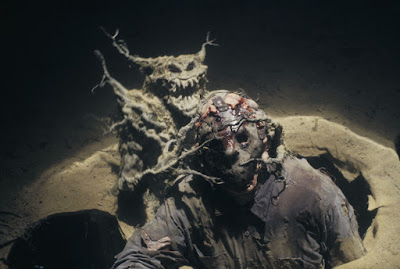 Tree Demons we never got to see

All of 'Superman IV' should have been a deleted scene. I'd like to see the 'Bill and Ted' and 'Little Shop' scenes, though.

Im going to post this link on the post, but check out anyways, this is the whole original ending to Little Shop of HOrrors:

There are ones that exist for BEETLEJUICE that I recall seeing in an old issue of CINEFANTASTIQUE. I think there is more footage of the sand worms. I should see if I could hunt 'em down.

Hey J.D., Im going to be doing a part two of this post, where I will be posting more rare deleted scenes, Im going to try and post the ones you are mentioning.

Great post! I don't know where to begin...I've got the Little Shop deleted scene all cued up and I'm going to watch it as soon as Publish My Comment...I think I saw some shorter alternate ending clips on the DVD but I don't recall the 23 minute version. Thanks for sharing this. I agree with Bob and Superman 4...pretty much all should be deleted...but I must say that Mariel Hemingway looks hot in it. Please more posts and delete scenes!

Tom, let me know what you think of that 23 minute ending...its a rough cut, a work print, its missing some sound effects and the music isnt perfect, but it was pretty close to completion.

That ending was pretty epic, and everybody dies! Even Seymor and Audrey!

DUDE! AMAZING! I had no idea any of these existed, that is friggin fantastic, going to check my disc of LSoH now, but I know we bought it years too late to have the awesome alt ending..