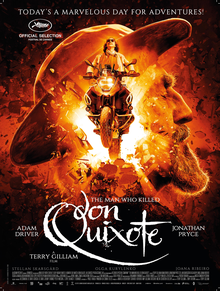 If you look at the repertoire of films in director Terry Gilliam’s career, you’ll see that a lot of his films have a Quixote quality to them. Many of his films deal with a man who escapes to fantasy worlds in order to avoid the harshness of the real one. For example, in The Adventures of Baron Munchausen (1989), the aging Baron Munchausen calms a war torn town with his tall tales of fantasy and mayhem same as Quixote’s tall tales. Like Don Quixote, the Baron rides a horse wields a sword and fights fantastical creatures. Like Quixote, the Baron gets old when life grows stagnant and only adventure brings him to life! The Baron and Quixote are always avoiding death…from old age…or simply having death itself (read: the grim reaper) literally chasing you around. They are both in love with the “beautiful ladies”. And that’s not the only Quixote like example in Gilliam’s career, Jonathan Price’s character in Brazil (1985) is also a man who escapes into fantasy. In his fantasies he sees himself (much like Quixote) as an armor wearing sword wielding warrior, fighting giant buildings that emerge from the ground…similar to how Quixote has to fight windmills who are “giants”. 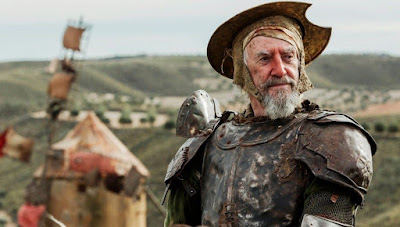 So yeah, Quixote has always been very close to Gilliam’s heart. And it makes all the sense in the world, because after all, isn’t Gilliam like Quixote himself? A man avoiding the horrors of boring old reality by escaping into his fantasy films? Fighting the giant windmills of Hollywood and life to make his films? I’ve always appreciated Gilliam’s defense of the great escape, the importance in our lives for storytelling, the beauty of theater, the comedic tragedy that is life. It’s one of the reasons I personally connect with director Terry Gilliam’s films and the overall message of his films. They are against reality and all for high adventure and bewilderment! His films are for the zany, crazy part of life as well, how we shouldn’t take things so damn seriously. His films have a feel of someone who wants to amaze and entertain you with the many possibilities of pure fantasy. Of escapism of the highest caliber. 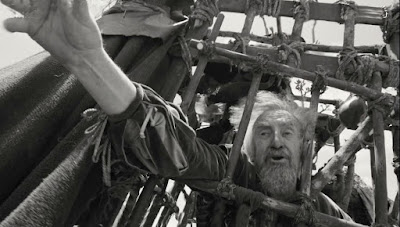 Which is why I appreciate The Man Who Killed Don Quixote (2019) and how it got made. I mean, here’s a film that Gilliam at one point attempted to make but failed. It’s such a sad tale, yet such an amazing one at the same time. A documentary was shot of the whole thing called Lost in La Mancha (2002) and it’s just mind-blowing. Here’s my review for it, read it and find out why it’s such an amazing experience to see. But in a nutshell, everything went wrong that first time Gilliam attempted to make this film in Spain back in 2000. The actor who was going to play Don Quixote got a back pain and couldn’t ride his horse, a storm destroyed all the sets, millions were lost and all for nothing because quite literally, Gilliam pulled the plug on the film. He gave up on it. Or did he? Thanks to the folks at Amazon, he finally got the chance to make the film. It’s been 25 years in the making so this film is kind of a miracle!

Here's a picture of Gilliam, on location with Jean Rochefort; Gilliam's choice for Quixote in the first attempt at making this film. Gilliam's face on this pic says a thing or two about what a grueling experience that first attempt was.

Was it worth all the pain? The answer is a resounding yes! It’s Gilliam going back to his roots, to that pure fantasy escape, but told in a closer way to Gilliam’s true inspiration in his career: Cervante’s Don Quixote. Of course, this isn’t the Gilliam of the 80’s who would get 60 million dollars to make The Adventures of Baron Munchausen (1989), this is Gilliam on a tight budget. I’m sure this film could have been made with more special effects…to bring that fantasy to life, but it’s not.  This is a slightly restrained Gilliam in terms of going nuts with special effects. We do get one fun moment in which ‘Quixote’ fights with three giants which is gloriously good, it reminded me of what Gilliam loved to do in the 80’s, it brought to mind that giant that comes out of the ocean with a pirate ship on his head from Time Bandits (1981). And there’s little things here and there throughout the whole film that will remind you of previous Gilliam films, loved that about it. 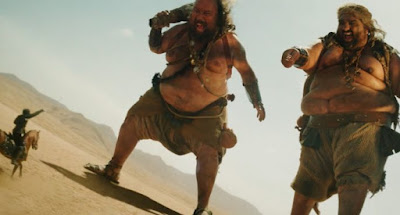 When directors hit their mature years, they tend to make films that are deeper and more profound and not so focused on pure spectacle, and this is that type of film. It’s not special effects left and right, it’s a more character driven tale about this self-centered film director that reconnects with an actor he made his first film with, the film he made is called The Man Who Killed Do Quixote. The actor believes he is Don Quixote and at times, you believe it. Maybe he is? Who knows. That’s for you to decide. But the film once again hits one Gilliam’s favorite themes, fantasy vs. reality. The fear of death and the wanting to live life with an adventurous spirit or die trying. It’s all told from a very meta perspective in the sense that it is a film about filmmaking, the frustrations and the pleasures of being a creative mind. How making a film is a true struggle. 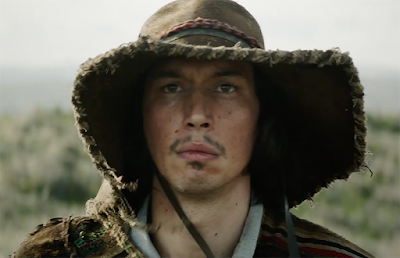 I loved this movie for many things, among them that shift between fantasy, memory and dream world, then back to reality. That code switching between worlds is excellent and vintage Terry Gilliam territory. So this is basically like Gilliam’s life thesis, encapsulating everything his learned about life and filmmaking and giving it to us. It’s such a pity that the film is actually going through legal issues (the struggle continues!) and it could only be shown one day in a few theaters…I was lucky to see it on the 42ndStreet Regal Theater in New York. I was kind of hoping he was in the audience…because it’s a one-night event and it was New York. I could have sworn I heard his peculiar Terry Gilliam laugh at one point...I swear he was watching it with the audience. Or was it a fantasy in my mind? I’ll never really know. Final take on Gilliam’s The Man Who Killed Don Quixote is that its Gilliam going back to his roots. It has a lot of what made Brazil and Adventures of Baron Munchausen great, but on a smaller budget and more focused on story and performances. Adam Driver and Jonathan Pryce deliver amazing performances and make the film that much more pleasurable. Glad to see Gilliam is still making great films. Through Gilliam, Cervante’s heart and spirit beat fierce and free still! 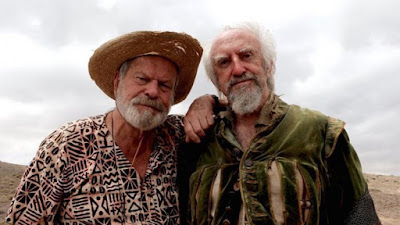 This film is certainly destined for cult status but at the same time is it a muddled and confusing mess and in that regard could be looked upon as this generations "The Last Movie" (Dennis Hoppers bizarre oddity from 1971). BTW, its perhaps difficult to explain exactly why but i`ve always regarded Gilliams apparent lifelong obsession with Don Quixote as rather embarrassing and idiotic, almost as though he forgot all about the comedy that made him famous and decided to become a highbrow elitist semi art-house film-maker instead.

Hey John, his obsession with Quixote actually makes sense, because he has many things in common with the character, like the love for fantasy and escapism and hating the realities of life, like bureaucracy and politics. It makes perfect sense if you think about it, and his films (including this one) still retain that Monty Python vibe to them. It's what makes Gilliam, Gilliam in my opinion the mix of high art with low brow comedy. As in lets not take like so seriously and learn to have fun with it, because its all rather silly at times anyway.