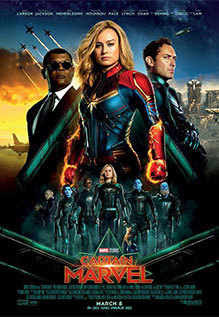 Captain Marvel is an anticipated superhero film because it’s the film that connects to Avengers: Endgame (2019), the end all be all of superhero big budget films. People don’t really know who Captain Marvel is because it’s never been one of the most popular characters. No my friends,  audiences will flock to Captain Marvel because it is a Marvel film (and therefore big budget) and because of its Avengers: Endgame connections. This movies job should be to get everyone hyped for Captain Marvel and love the character by the end of the movie, so that you’ll end up wanting to go see Avengers: Endgame day one. Captain Marvel had to have a wow factor to it. Did it achieve it? Endgame will be the pinnacle of everything that Marvel Studios has been working on for the past couple of years. The ending of a series of interconnected films that always leave you on a cliffhanger wanting more! The cliffhanger comes from the comics these films are emulating. I know because I’ve always collected comics since I was a kid and still do. The comics I read back in the 80’s and 90’s, were always “to be continued next issue!” You could almost hear Stan Lee’s voice at the beginning or ending of the old marvel comics. It was always, “see you in two weeks true believers!” By the way, I loved the homages to Stan Lee. Get ready for Stan’s last cameo, it’s a brief but good one and another solid reference to the 90’s. 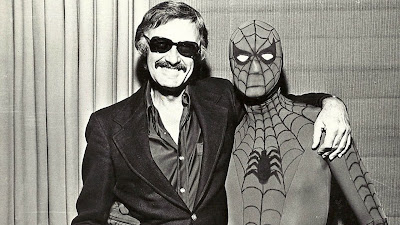 Thanks for everything Stan!

So yeah, of course by now, Disney/Marvel could make a remake of Mac and Me (1988) and people would still flock to see it. You’ve been conditioned to like these movies, even obsess about them and it’s worked! Whatever film Marvel puts on the screen is going to be a Ka jillion-dollar multi-platinum, crackling-thunder, bonafide success at the box office. Captain Marvel is just the latest in a runaway train of success for Marvel. As I write this, I can hear the cashiers ringing at the box office. But of course, we all know it’s the curiosity of how Captain Marvel  connects to Avengers: Endgame (2019) that has gotten those butts in the theater seats. Did Captain Marvel receive that beeper message from across time? Will she be the one to kick Thano’s blue butt to kingdom come in End Game? Will the audience like Brie Larson in the role of Captain Marvel? I was hella curious to find out of Larson could pull it off and what kind of film this would be? I love sci-fi so I was curious. 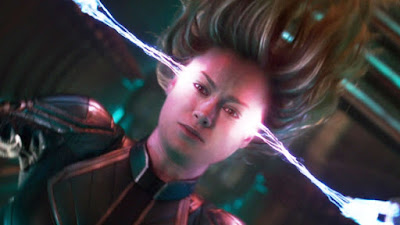 Captain Marvel is Marvel’s response to DC’s Wonder Woman (2017). Now its Marvel’s turn to show they can capitalize on feminism. Like I said in my review for Wonder Woman, I like what that film did for women in Hollywood and the real world, more than the film itself which felt kind of generic.  Same goes for Captain Marvel, kind of generic, but entertaining at the same time. The thing Captain Marvel doesn’t do is wear its feminism on its sleeves. It’s not about Women vs. Men or anything, it’s only concern is fun. It’s not preachy with its themes. For example, in Wonder Woman, men and women talked about their differences and why they need each other. That doesn’t happen here, in Captain Marvel the main character doesn’t concern itself with comments on gender or anything, she just kicks ass, she’s indestructible, super powerful. The movie seems to say that being a woman is not the issue here. Well, at least not with as loud a voice as Wonder Woman did. 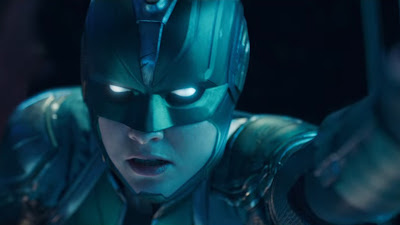 What I loved about the movie was that it took place during the 90’s. The music of that era is always referenced through-out the film as are distinctively 90’s things like a Blockbuster Video Stores, dialing up for internet or VHS tapes. The soundtrack is a 90’s smorgasbord that includes Hole, No Doubt, Nirvana, Beck and Bush among others. More filmmakers should dive into the 90’s nostalgia, its ripe for the taking. Which I think is cool, that’s a decade that should be explored more in films. It was the era of grunge. We heard alternative in the 90’s man. Don’t know what it is, look it up little kid. Captain Marvel has a cool 90’s vibe and attitude. It’s a fish out of water story, with the fish swimming in the 90’s. An indestructible fish, kind of like Superman. I got a very Tank Girl (1995) vibe from this movie at times, which is awesome in my book and puts a couple of extra points up on the ‘love for the 90’s board’. 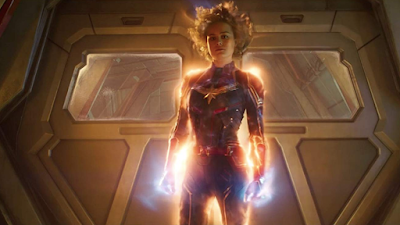 Captain Marvel had a story of self-discovery. Of true friendship and sacrifice. Of selflessness and what it means to be a hero. Brie Larson is likable and looks great on the suit, but I thought she needed a bit more soul, more personality. Vulnerability always makes a character more interesting. That’s why most of these all powerful characters always have some major flaw. They can’t be all perfect and powerful! The film does put Captain Marvel in perilous and entertaining situations, but it feels like nothing is ever going to hurt her. As a viewer it lowers your anxiety levels a bit. And it’s a CGI max out! So much of the film is computer animation that you wonder just how much of this was shot on camera? Still, the action scenes are quite cool, with emphasis on keeping it funny. The dialog ranges from sci-fi babbling about things we’ll never understand to “you’re my best friend and I love you” but with jokes in between, so don’t expect depth. Nothing is ever too serious here. It was a fun watch, not the greatest Captain Marvel story ever told, but certainly entertaining enough to be a good origin story. The film has two post credit sequences, so if it matters to you, stay and watch all the credits! Next stop is Avengers: Endgame (2019) see you real soon here in The Marvel Connoisseur. I mean, you know what I mean. 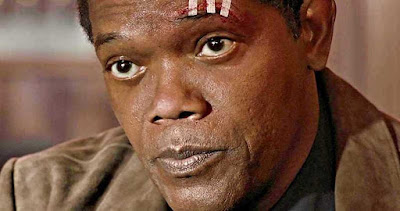 I agree, I enjoyed it is not the greatest Marvel movie but it is not their worst either. And I agree with what you said about Marvel movies everyone seems programed to liked them. I loved some and others not so much. Can’t wait for Endgame and for Spider-man

What i like about super-hero movies is that they always give the audience their moneys worth and thats the most important thing for any movie to do.

Im guessing thay with all the money its making, they will hopefully make a better sequel.

Captain Marvel certainly offers a bang for your comic book buck! The action scenes were cool a d exciting..