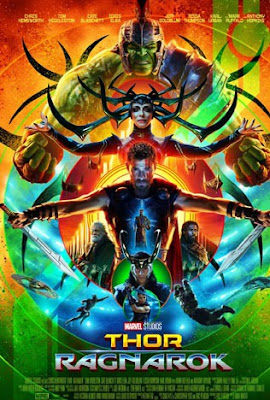 Within the Marvel movies, there are the huge hits that everyone loves like Guardians of the Galaxy (2014) and The Avengers (2012) and then there are those films that people liked but don’t go bananas over, like the Thor movies. The first film was directed by Kenneth Branagh and I was really pumped for it because he’s known for doing Shakespeare adaptations and so I was like, cool, he’s going to bring that Shakespearian quality to the Thor universe, which he did. That first film was all serious and tragic in true Shakespearian fashion. It was followed by a less then spectacular sequel which really didn’t do much for me. Which is probably why the Thor franchise has never been the one to light the Box Office on fire, well, at least not as spectacularly as the rest of the Marvel Universe. Thor movies made money, but didn’t make as much as the rest. Which meant something had to be reworked, something had to be fixed, because people weren’t reacting as favorably to the Thor franchise as Disney hoped they would. So what’s a studio to do? Well, Disney did what they had to do, they tried something new for this third film to ensure its success. They made it funny. Did it work? 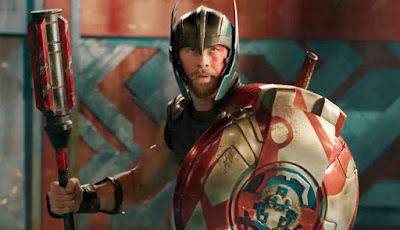 This time around Thor faces the takeover of Asgard by his evil sister Hella. Unfortunately, he accidentally ends up stranded on a distant planet where people are obsessed with Gladiator fights featuring The Incredible Hulk as the star of the show. Oh, and Thor’s also without his magical Hammer Mjolnir. Can he get back home to fix things in Asgard before his sister begins her reign of terror? Will he ever get Mjolnir back? And can he win in a fight against the Hulk?

With the success of films like Guardians of the Galaxy (2014) and Deadpool (2016), suddenly offbeat movies that didn’t take themselves so seriously were the big money makers. And so, this new Thor movie is a thrill a minute, fast paced, joke fest. It’s lighthearted and crazy and I love it and so has the rest of the world; Thor Ragnarok has turned into one of the biggest money makers in the entire Marvel Cinematic Universe. A huge part of the successful formula for this enjoyable film is the guy behind the camera, Taika Waititi. Who the hell is Taika Waititi you might ask. Well, he might not be a household name yet, but Waititi has been making movies for a while now. In all honesty, he’s a rather gifted storyteller. If you want to see what he is capable of, I recommend you check out a movie he made called Boy (2010), a touching and beautiful film about a boy who misses his father. Waititi acts, writes and directs his own films, yes my friends, Waititi is a creative force to be reckoned with and I have a feeling we’ve yet to discover what he can really do. I mean, if this is him working with a studios ideas, imagine when he does a project thats purely his. I predict good things from Waititi. You might remember him best for his performance in a faux Documentary What We Do in The Shadows (2014), a super funny film that follows a group of vampires who are all house mates in a flat in London. Just hilarious, highly recommend checking that film out. After seeing Waititi’s repertoire, you’ll understand perfectly well why Thor: Ragnarok is so hilarious. So remember, if you enjoy the funny in Ragnarok, Waititi is the guy you have to thank.

What Waititi does with some of his films is he turns things around, he puts a tired idea in a new unexpected situation. I mean, there’s no more tired genre than the vampire genre and Waititi made it work. He made us see vampires in a way we hadn’t seen them before. I mean, did you ever think you’d see vampires squabbling over who should do the dishes? “Fuck that! Vampires don’t do dishes!” Did you ever think you’d see Thor being traumatized after seeing Hulk naked? Well, in this movie he does, and that’s what I’m talking about, he puts the characters we know and love in funny, unthought of situations. Situations you’d never imagine seeing them in. Situations that most movies would avoid. Not only is the film funny, but it shatters the foundations of the Thor universe to their very core. Thor goes through a life changing journey, more so than any previous films. Ragnarok shakes things up good. Nothing is sacred. All while spewing one liners. You wont feel danger or peril, but you’ll have one hell of a good time. You’ll bust a gut with the banter between Thor and The Hulk. 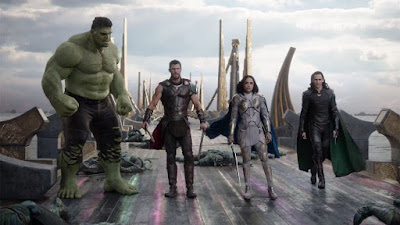 Speaking of the films look, well, it’s very bright and colorful. It’s very much in tune with the look and feel of two very important comic book artists who helped shape the character of Thor in the 60’s. I speak of  Jacky Kirby and Walter Simonson. Kirby and Simonson did some of the more seminal runs on Thor, they helped shape and define what Thor eventually became, the way he would look. Waititi and crew paid homage to these classic artists by giving the film a very classic look with regards to set designs and the wardrobe of some of the characters. Thor himself has a more contemporary feel, getting away from the long hair, the capes and the hammer, making him less of a Viking. So the film is a bit of the old and the new.  Speaking of the old and the retro, If you love the 80’s then you’ll love the soundtrack which is pure 80’s synth stuff. It has a John Carpenter/Stranger Things vibe going for it. Thor: Ragnarok is a film that is showing us just how important it is to put the right person behind the camera, because without Waititi, this would be a very different film. This film shows movie studios can realize when something didnt work and that they shouldn’t be afraid to go in an entirely different direction to try something new and freshen things up. Who knows, it just might work. This is a lesson the DC Universe could learn from. 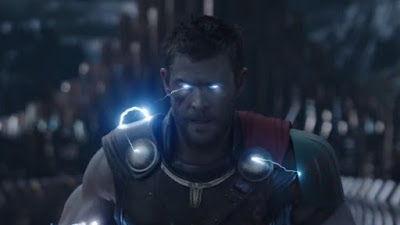 Francisco, it looks as though THOR: RAGNAROK is gonna` end up with about $200 million more at the worldwide box-office than JUSTICE LEAGUE (about $870 million against $670 million) but i actually thought JUSTICE LEAGUE was a marginally better film. Overall of course they were both terrific films, but, like i said, i`d still just give the edge to JUSTICE LEAGUE. Which one did you think was the better movie ?.

I enjoyed both films, but I think Thor Ragnarok is better in many ways. Justice League feels a bit disjointed.