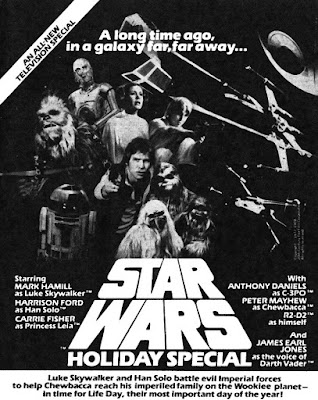 The Star Wars Holiday Special, which aired on American television during Christmas Season way back in 1978 is a page of Star Wars history that a lot of fans, including George Lucas himself, prefer you’d pass on and not even look at, which of course will make you want to watch this “forbidden fruit” even more. It’s hatred is evident by the fact that it’s never been released on VHS, DVD or Blueray. Hell, this thing didn’t even make to Betamax! There’s no love from George Lucas for this thing. I decided to give it a proper chance once again, because I was going to conduct a screening of it for a Star Wars Parody Night thing I did. The screening consisted on the mother of all Star Wars parodies: Spaceballs (1986), followed by some funny Star War themed short films and finally the Star Wars Holiday Special (1978). Half way through the screening of the Star Wars Holiday Special, I was strangely hypnotized by it and so was the rest of the audience! I guess, when watched under the right mood, this thing isn’t as bad as everyone paints it to be. Plus there's the nostalgia factor and the fact that its like a time capsule from the 1970's. But it’s still bad, there’s no way around it. It’s an odd bird. 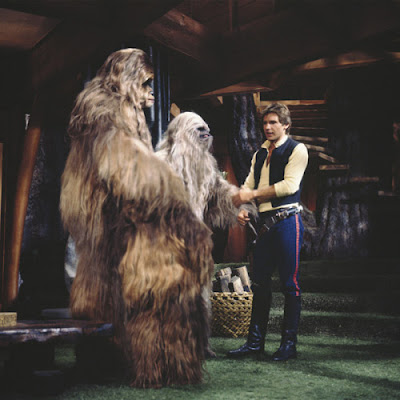 The story takes place as Han and Chewie are on their way to Kashyyyk (that’s Chewies home planet for you non Star Wars fans) but on the way there, they get attacked by a couple of imperial spaceships, which sets their journey to Kashyyyk back a bit. So Chewie’s family is worried because he hasn’t returned. Chewie’s wife Malla is all sad and impatient so she decides to give good old Luke Skywalker a call. Luke tries to calm her down by telling her not to worry, that everything will be alright. To top things off Chewie is trying to make it back home before a Wookie holiday called ‘Life Day’, which is the Wookie equivalent of Christmas. Will Chewie make it back to Kashyyyk for Life Day? Sure it’s weird seeing Chewbacca being a family man, with a kid, a wife and a grandpa waiting for him back home. At the same time, within the context of a holiday movie, it complies with the requirement of being endearing and family oriented, which means it has a lot of crying, singing and hugging.  Strange part is that all these tender moments clash with the weird ass what the hell moments, all of which I will go into right now for your reading pleasure. 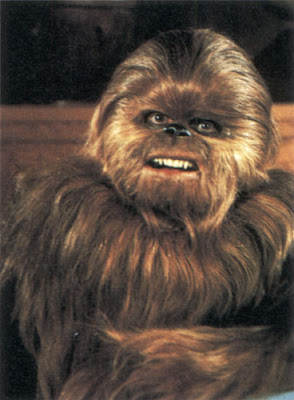 First up, we get introduced to Chewbacca’s family composed of Malla, Chewie's wife, Chewie's kid is a little Wookie kid who goes by the name of Lumpy. Lumpy likes to play with his wookie toys and eats his wookie moms cookies. Then we have Itchy, the grumpy Wookie grandpa. The whole idea is just hilarious to me. We get about a whole half hour of the three Wookies just talking in grunts the way Chewbacca does. Ever wanted to see Chewbacca’s wife watching a weird ass cooking show, so she can cook her holiday meal? Look no further, it’s here! The thing about this holiday special is that it has a lot of comedians and acts that are no longer relevant today, so new watchers will be totally lost as to who Harvey Korman was and the fact that it’s supposed to be a ‘funny’ moment in the show, but it’s cool because the funny catches you by surprise. I must admit the whole bit with the cooking ‘lady’ who has four arms got a couple of giggles from me, ultimately, it feels kind of pointless! What the hell does this have to do with Star Wars or anything? Absolutely nothing! It’s just filler, something funny to put on the screen, like most of the things you’ll see on this special. 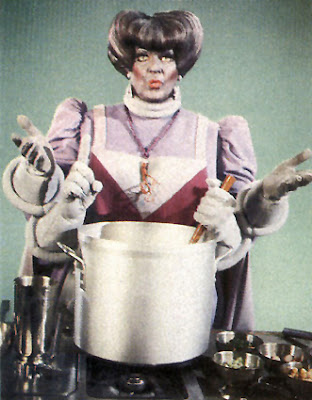 There are a lot of moments on this Holiday Special in which characters sit down to look at something on a screen and then we get to watch what they are watching, this happens all the time and its where the entertaining side of this Holiday Special comes in. We have a moment in which Lumpy, Chewie’s kid, looks at holographic images of circus performers who look like something out of Cirque du Soleil. It looks cool and all, and the music is trippy, but again, it goes on and on and then goes nowhere. Actually, this Holiday Special is made of a lot of trippy, sort of surreal moments strung up together. You might feel like you’re under the influence of mind altering drugs. I’m not the first to suggest that this whole special might have been made by a sentient bag of cocaine.

There’s no trippier what the hell moment than the one in which Itchy, Chewie’s dad opens up his holiday gift and it’s this virtual reality disk that contains a performance by 70’s singer/actress Diahann Carroll. The holographic entity called ‘Mermeia Holographic Wow’ is sort of a holographic projection of all of grandpa Wookie’s sexual desires; I’m not making this shit up! The hologram tells grandpa Itchy: “I am your fantasy. I am your experience. So experience me. I am your pleasure. Enjoy me. This is our moment together in time that we may turn this moment into an eternity. ” She then proceeds to sing and dance a sexy song, which I must admit was alluring in a 70’ sort of way. Her performance is filled with all these old school television level visual effects, hypnotizing in a way; certainly one of the best things about this Holiday Special. The problem is that immediately after watching this scene, you realize this show is supposed to be for kids?!  It also makes you think of why would an aging Wookie have sexual fantasies with a human female and not a Wookie female! But whatever. No logic on this thing whatsoever. 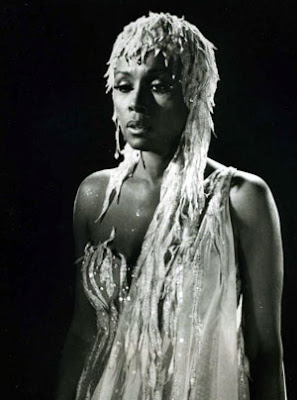 Then Lumpy, the Wookie kid, starts watching cartoons and we are treated to an animated segment that I didn’t understand very well because it’s not very well written, but it amazed me from an animation stand point. It included all the major Star Wars characters battling monsters in an alien planet called Panna. They were after some sort of magical talisman. This animated segment is valuable within the Star Wars cannon because it’s the first appearance of Bobba Fett in the Star Wars universe. That’s right my friends, the first time Bobba Fett popped up in Star Wars, was in animated form! Anyways, the drawings were sort of like something out of a Moebius comic book, at least in style. Which I dug a lot. I wonder how psyched little Lumpy must be to see his own father in a cartoon show?! After that we jump into a scene in which imperial guards enter Chewie’s house and start harassing the family, looking for rebels. One of the guards asks about an apparatus that on the table. When they show him what it is, it’s basically a television, when they turn it on, the Imperial Guard literally becomes hypnotized by a Jefferson Starship performance! Picture the lead singers microphone looking like a lightsaber with a bunch of purple, throbbing circular lights emanating throughout the performance and you’ll get a gist of what to expect! 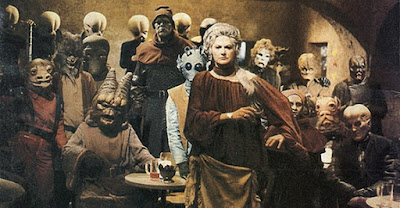 Then we have another comedic relief moment that takes place in the Mos Eisley Cantina, with one of the Golden Girls (Bea Arthur) singing a sad song about the Empire closing down her bar. Who would’ve thought that one of the Golden Girls is the owner of the Mos Eisley Cantina?! Anyhow, the whole scene involves her trying to get rid of the last customers as they drink their last drink. More padding, but I guess it shows the oppressive arm of the Empire, pressing down on the people. Also, we see a lot of the aliens we saw in Star Wars: A New Hope (1977) making a cameo, we gotta remember that this came out only a year after Star Wars was released, what they did for this scene was simply re-use the monsters leftover from the first movie. Then we get more funny stuff with Harvey Korman performing as a robot instructor giving Lumpy instructions on how to build one of his toys? Totally pointless, but again, kind of trippy because the malfunctioning robot starts to talk really slow and then they make it look like his malfunctioning by rewinding and fast forwarding the footage. It certainly makes you think “what the hell were they thinking?!” 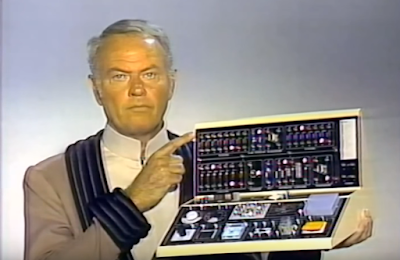 Then we go back to the whole story about Chewie returning and we get the whole gang back together celebrating Earth Day with Chewie and his family and a bunch of Wookies all dressed in Red Gowns.  If that isn’t weird enough, then Princess Leia starts singing a song to the Wookies. Just imagine the Star Wars theme song, but with lyrics about Life Day! Sang by Carrie Fisher. At the end of the day, this movie is all about Chewie, who ends up looking like the hero of the show, protecting his family from Imperial Trooper by throwing them down the balcony of his home. Chewie is a hero of the rebels and a good husband and father! Wow, what an over achiever!  After that, it’s all party and surrealism as we are shown a series of montage of Chewies best moments from Star Wars: A New Hope (1977). Then Chewie and his family eat dinner together and then disappear into some sort of magical trippy star…or something. It looks like they are walking to heaven or something, walking into the light.  So yeah, that’s the whole thing. Lucas didn’t have much to do with this, obviously. He hates it. The special has never been rebroadcast or released on any sort of media. But thank god for the internet, now you can watch it on YouTube and marvel at its awfulness. Or trippiness? You be the judge. Someone sitting next to me during the screening said that they made this Holiday Special for potheads. I’m thinking I agree entirely. 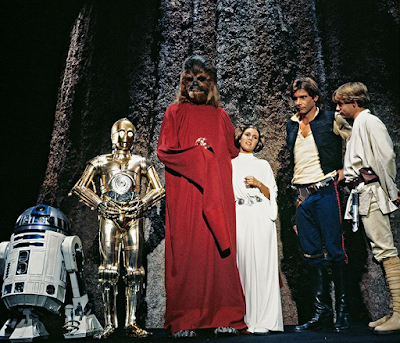 I can neither confirm nor deny that I was smoking heavy stuff when I watched this. Wasn't as bad as people think. It was pretty good actually.

Exactly! I was laughing all the way!