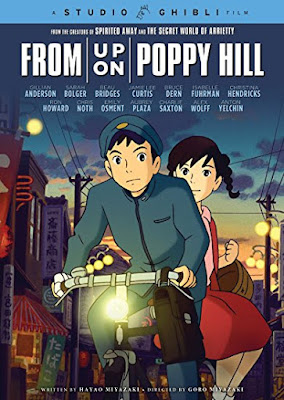 Hayao Miyazaki will always be a legend in the world of animation; he helped establish Studio Ghibli, one of the best animation studios in the world and is responsible for directing and animating many of their wonderful films. Some of my favorites are Spirited Away (2001), Nausicaa of theValley of the Wind (1984) and Ponyo (2008), but it’s unfair to name only three of his films, because he’s made so many good ones! I’d say that they are all my favorites. Sadly Hayao Miyazaki is working less and less these days, probably due to his old age. His last directorial effort was The Wind Rises (2013). The good thing about Miyazaki is that he is one of those directors who keeps making excellent films no matter his age, unlike some directors who kind of  “lose it” in their last days. But it looks like he’s working less and less all the time. Thankfully, his son Goro Miyazaki has taken the reins of studio Ghibli and has already produced two animated features: Tales from Earth Sea (2006) and the film I’ll be reviewing today From Up on Poppy Hill (2011). Does Goro Miyazaki have the same ability as his father to create worlds of wonderment and endearing tales that touch the heart? 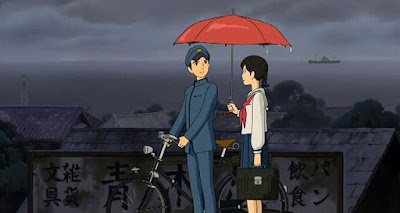 From Up on Poppy Hill is a story that takes place within a school in Yokohama, Japan. On one side of the school it’s the girls and on the other side, the boys. On the boys’ side, the school is threatening to close down a building which serves as a club house for the boys. This building means a lot to the students because it’s like a mini university within the school; it’s their own private little world. It’s where all the little geniuses get together to explore their favorite school courses. Even the school newspaper is written and printed there. This desire to save the club house brings the school together; boys and girls join forces in order to save this ancient building. In the midst of all this, we have a romance brewing between a boy and a girl who come together in an effort to discover their roots and uncover who they really are. 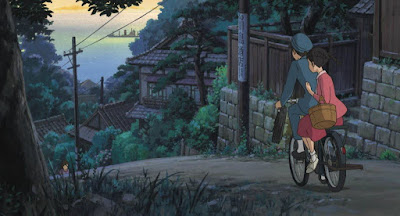 There are certain elements that distinguish Miyazaki’s films from all others; one of them is the importance that he gives to the environments. The setting and the world in which the story unfolds is as important as everything else. Miyazaki creates worlds that I want to live in. For example in Ponyo (2008) the main characters live on this cozy little house, on top of a hill, right next to the ocean. The home looks so warm and inviting that it’ll make you want to be there, feeling that cool ocean breeze right next to Sosuke and his mom. Goro Miyazaki creates something similar for From Up On Poppy Hill, a story that unfolds in a cute little town in Yokohama Japan, during the 60’s. This little town will make you want to pack your bags, travel back in time and walk in the streets of that cozy little town, buying a warm dumpling from a street vendor and eating it as the rain falls. So Goro Miyazaki’s films share that importance to ambiance and atmosphere that his father gave to his own films. These are not the only similarities between Goro and Hayao Miyazaki’s films. 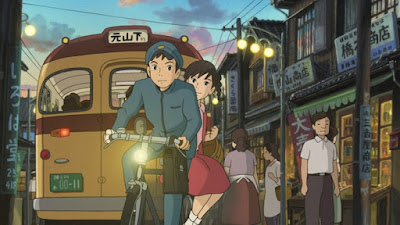 Hayao Miyazaki’s films are always about endearing, immediately likable characters and warm hearted situations. They are an explosion of happiness and a celebration of life and how beautiful it can be. Most of the time there’s no place for sadness on Miyazaki’s films. Some might argue that this happy go lucky nature of Miyazaki’s films makes them unrealistic, or difficult to identify with, but I beg to differ because characters in Miyazaki’s films do go through transformations and their journeys, which are filled with challenges and difficulties, but they go through them with a positive attitude and a good heart, which sometimes makes all the difference in the world. Goro Miyazaki’s From Up on Poppy Hill offers us these positive vibes as well. Same as in his father’s films, characters in Goro Miyazaki’s films do good things for each other simply because. The main character in the film, a fatherless high school girl, wakes up early in the morning to make breakfast for her entire family. The film is filled with good natured scenes like this one, like the scene in which the girls help the boys clean and fix their clubhouse. Boys and girls working together to change their world; instead of propagating that old stereotype of boys and girls hating each other all the time. It’s a beautiful scene. It’ll make you wish you were 12 again, playing in a clubhouse like that one with your friends. 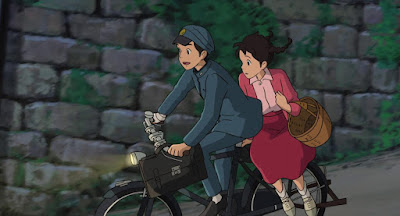 But I guess what makes this film so ‘Miyazaki’ is that Hayao Miyazaki wrote it, and Goro Miyazaki directed it, so we get a double dose of Miyazaki on this one, father and son working together to give us an extra Miyazaki film! Even though the Miyazaki’s make films with a happy nature about them, within the context of the film, they also tackle serious issues. Spirited Away (2001) is all about a little girl learning to accept her responsibilities in life and pulling her own weight in the world. From Up on Poppy Hill also stars a little girl (another Miyazaki staple) who misses her father, a sailor who drifted away into sea one day and never returned. Is he still out there? Will he ever return? She handles all these issues while also falling in love with one of the boys in her school. There’s this beautiful scene where they are both riding a bike together through town during a cold, rainy evening, I loved it. I don’t know what it is about the Miyazaki’s, but they know what warms our hearts, and they put that into their movies. I think what attracts me the most to their films is that warmth. Simply seeing people being good to each other as opposed to the harshness we sometimes confront in our daily, real world lives. But then again, I think the real world can be the way it’s represented in these films even if they might be a bit idealistic at times. So what, I’m with the Miyazaki’s, I say let’s dream big about what humanity is capable of becoming. Go out there today and be randomly good to someone, simply because. 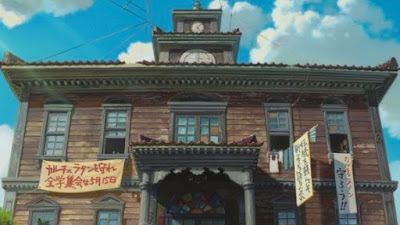 Great review. I haven't seen this one yet, but it is on my list. Miyazaki is supposedly retired, but he's said that back int he 90s too. I hope he continues to make new films. His talent is really one of a kind.

Exactly, I remember when he said that Ponyo was his last one! I too hope he keeps making films, they are a gift from the movie gods. :)

I love Ghibli stuff. They make great tv shows as well, that don't reach the western audiences. I'm really into Miyazaki's works, but in my opinion the best Ghibli film was directed by a different guy. Whisper of the Heart is an amazing film by one of Miyazaki's apprentices. Try it, you should like it.

I will check out Whisper of the Heart, thanks for the suggestion Sergei!

With Hayao Miyazaki, it's not so much a question of desire and more a question of his physical state. At his age, can he physically take on the duties of directing a feature length animated film again? With each release since Mononoke he's had less and less stamina left. I kind of believe it when he said The Wind Rises was his last.

My favorite Ghibli is 1991's Only Yesterday, which will finally be released sometime next year on Blu. Directed by Isao Takahata. He also directed Grave of the Fireflies and The Tale of Princess Kaguya.