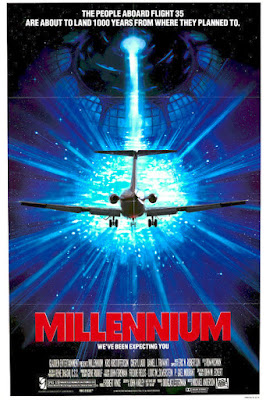 Millenium is a post-apocalyptic science fiction film about a future in which the human race is dying because they’ve lost the ability to reproduce. Apparently there is so much toxic waste in the air that it’s not even breathable. But wait! There’s still hope! The world might be messed up beyond repair, yet these crafty dudes from the future have somehow managed to perfect time travel technology! Their solution to earths population problem is to steal people from the past moments before they are about to die, then they take them to the future so they can start repopulating the earth. The problem comes when these time travelers get clumsy and leave weapons and gadgets behind in time; you see, leaving things from the future in the past can create deadly world destroying paradoxes! Will the future people manage to recuperate their gadgets before a paradox occurs that will destroy their world? 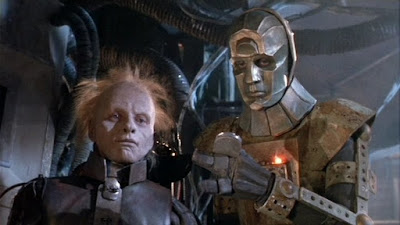 The good thing about Millenium is that it’s a film with an interesting premise. It pulls you in with its mystery around the whole time travel element. The whole premise about a decrepit, decaying future was interesting. In this future, the air is so polluted that these guys have to smoke special cigarettes that keep them alive! Their skins are decaying, even robots are rusting away; to me that was a cool concept, everything looks old and putrid. Unfortunately, the film decides to turn into a soap opera of sorts, with Kris Kristofferson’s Bill Smith falling in love with Louise Baltimore, the girl from the future. Suddenly, it’s a love story about Bill and Louise hitting on each other, those silly awkward moments on a first date and finally, Bill seducing Louise. At heart I guess that Millenium is really more of a love story; which makes perfect sense when we take in consideration that these future people can’t reproduce, and they live in such a dreadful future with no apparent hope in sight. So I guess you should be ready for a film that places its emphasis mostly on the love side of things. 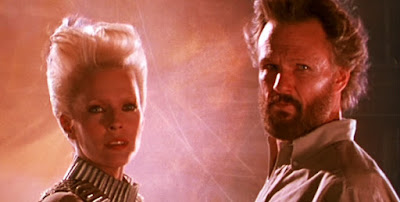 But the sci-fi angle is not to be ignored. We get people going through shiny blue time portals, robots that serve as peoples consciences and ancient people who can survive only by living inside of life supporting tubes! We get to see crying robots! Time paradoxes that cause earthquakes and characters that say the cheesiest lines on the planet! Yeah, let’s get that straight, this film might get a laugh or two from you at times, characters just talk in the silliest ways and do the silliest things. For example, the future is decayed, everyone is sick and dying yet the time traveling girls apparently have the time to put on make up and get perms! The world might be dying but Louise Baltimore is going down in style! Ha! It’s hilarious! When she goes to earth, she looks like a stewardess, but when she goes to her world, suddenly Bam! her hair is like a freaking 80’s hair band! It’s pretty funny; it looks so out of place!  Another funny thing, every time they finish smoking one of their healthy cigarettes, they don’t have to worry about an ashtray because a lazer beam comes out of nowhere and disintegrates the cigarette! Ha! No need for ashtrays on this future! On this future we have cigarette disintegrating lazer beams! Just imagine the logistics behind that idea! 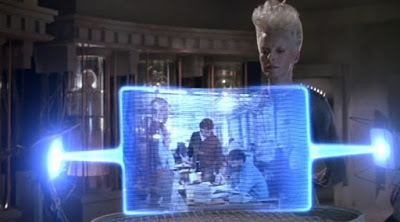 Even funnier is the fact that the whole time traveling set up is run by a guy on a wheel chair that looks like a zombie! Everyone standing around looks more adequate for the job than this guy who looks like he has one foot in the grave; want more funny? Okay here it goes, they can see the past like a movie, on a little t.v. screen! They have walky-talkies with which they can communicate through time! This means somebody that is in the past can actually talk with someone from the future! So we have audio waves that travel through time as well! Ha! There is this really funny sequence in which Louise travels back to the future, and after she walks through the time portal, an invisible force fixes the bed of the hotel she was staying in, because you know, it’s not polite to leave a room untidy after time travel! Point is, there are a lot of goofy situations and plot holes on this one; you can have fun simply by going through them as you watch the film. 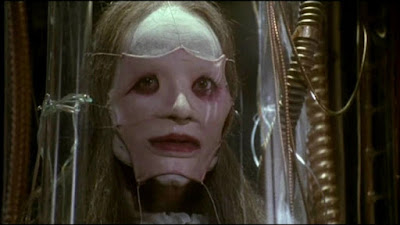 Millenium is a film that resembles many others that came before and after it. The one it resembles the most is James Cameron’s The Terminator (1984). There’s the time travel angle, there’s the love story between someone from the past and someone from the future. If you look at it, The Terminator is also a love story at heart. Millenium also reminded me of Alfonso Cuaron’s Children of Men (2006) because of the whole thing about humanity loosing the ability to procreate; though in reality, this is a recurring theme in post apocalyptic films. It has the quintessential sequence in which someone has to explain the whole logic of time travel, ala Doc Brown in Back to the Future II (1989) which strangely enough was released in the same year, only with far superior visual effects. I guess, even for it’s time, Millenium’s production values where kind of low and goofy. Visual effects wise, Millenium seems to have stayed back in time; which could explain the films low box office intake. Speaking bluntly the film was a box office bomb. 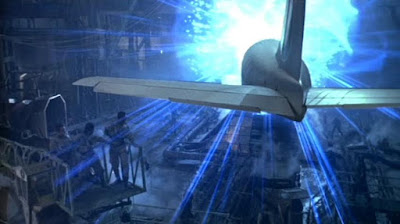 This was a production that spent a good amount of time in development hell. The project had been making it’s rounds in since 1977 when Douglas Trumbull the director behind Silent Running (1972) and the effects work on Kubrick’s 2001: A Space Odyssey (1969) was going to direct it; that project fell through; yet the project kept on going through various possible directors and rewrites. The short story in which the film was going to be based on was called ‘Air Raid’ by John Varley, yet the project was in development hell for so long that John Varley had plenty of time to expand the short story into a novel, which he printed in 1983. Finally the project came together and directing duties fell upon Michael Anderson, the director behind the multi award winning Around the World in 80’s Days (1956) and also of the sci-fi classic ’s Run (1976). In the end Millenium was a film made by an experienced director who turned in a very goofy movie that still has its own campy charm to it.

My mom loved this film. Maybe watch it tons of times...Barf!

She was probably attracted towards the more romantic elements of the film.

Excellent B movie for the wise sci fi fan.

Just watched this last night, read the book years ago