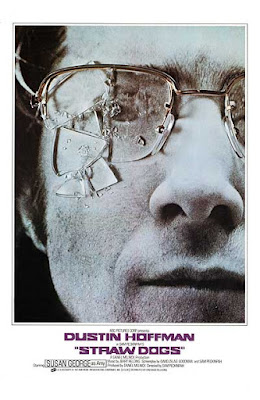 As a warning, I’ll let you guys know that this review is more of an analysis of Sam Peckinpah’s Straw Dogs, so if you don’t want to read any spoilers…your welcome to skip this review, otherwise, read on my friends because today we’ll be talking about Sam Peckinpah’s Straw Dogs! Peckinpah was known for making violent, sexually charged films that spoke about that animal/violent side that is dormant within most of us; and that was definitely the vibe that I felt while watching Straw Dogs, a film about mild mannered mathematician David Summer (Dustin Hoffman) and his beautiful wife Amy Summer (Susan George), who have just relocated to England to escape the violent political climate permeating in the United States during the early 70’s. I guess they figure things will be quieter in another country, far away from all the turmoil. And for a while, things seem fine. They are staying in a secluded house amongst mountains and green pastures. How can evil crawl up into this beautiful and seemingly peaceful landscape? 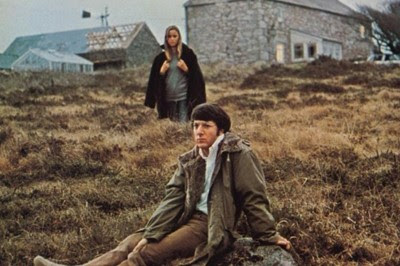 This is the premise for Peckinpah’s Straw Dogs a film regarded by many as the directors’ masterpiece. I haven’t seen Peckinpah’s entire repertoire, but Straw Dogs does feel like it could definitely be amongst his top films. It is a very powerful film, with some scenes that will definitely make some of you squirm. Some audience members were so shocked with this film that in test screenings, some actually got up and left half way through the film. They couldn’t take the violence and the sexual assaults that the film presented. At the time not many theatrically released films ventured this far into sex and violence, and so virgins to Peckinpah’s particular style of film, audiences reacted accordingly. The film was banned in some countries and edited down in others. 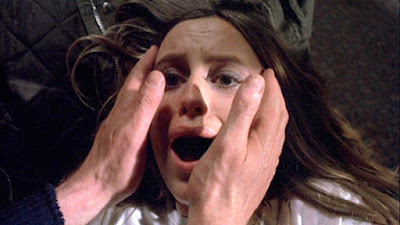 The scenes that shocked the most were the famous scenes where Susan George’s character gets raped and another scene in which Dustin Hoffman’s character goes nuts and smashes some dudes face to a bloody pulp. And though I’ve seen far more graphic films than Straw Dogs, this was one of the first to go as far and as graphic as it did. I mean off the top of my head I can mention Gaspar Noe’s Irreversible (2002) as a film that was obviously influenced by Straw Dogs, but decided to push the envelope a bit further by being even more graphic with its sex/rape scenes and its violence. But Straw Dogs did it first; it was one of the first to really shock people. So much so that some reviewers went as far as to accuse Peckinpah of being misogynistic, misanthropic and even fascist. But was he any of these things he was accused of because of making this film? Or was he simply exploring mans natural capacity for violence? Is the way women are portrayed on this film misogynistic? 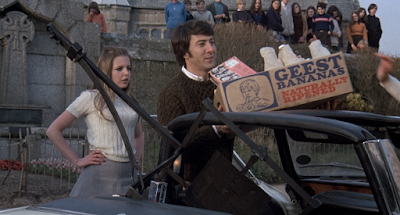 In my book, Peckinpah was doing what he came to this world to do. He was a filmmaker commenting on human nature and he did it without any filters, without anything to hold him back, which in many cases means we’re in for an honest movie, one that tries to tell things the way they really are. Nothing that is portrayed in this film can be labeled as fake or unrealistic. Situations like these do happen in the world everyday. Peckinpah was simply exploring why events such as these occur; what is at the root of it all? This is why I don’t really attack Straw Dogs the way some people do. But hey, I’m not going to deny that Straw Dog’s rape scene was not an easy scene to watch. I felt Susan George’s ambiguity; she wanted to be with the first rapist because her husband was cold and harsh with her at times. He ignored her because of his obsession with math. But at the same time, she didn’t want to get raped, of course she didn’t, no woman would want such a thing. Plus, she knew she was married, and she loved her husband. That scene is amazing because of the incredible range of emotions that Susan George puts across through her performance. Her characters divided self shined through and through, praises to her and that scene. To the films credit, the rape scene isn’t even graphic in nature, most of the pain and anguish is transmitted through Susan George’s facial expressions, yet the scene still manages to shock, a testament to the way the film was directed and acted. 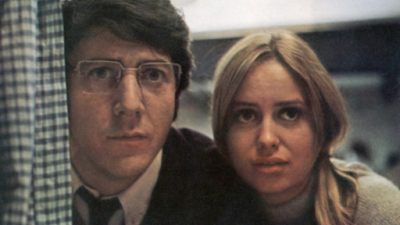 In Straw Dogs, Amy Summer is the ultimate provocateur, she walks around town bra-less, with mini-skirts. She doesn’t mind flashing people every once in a while either. Does this mean that she is asking to be raped? Should the fact that a woman dresses and behaves in a sexually provocative manner give rapists and excuse to do what they do? These are the questions that Peckinpah asks with this film. This film is about rape, no doubt about that, but also, it asks the question of what makes a man a man? Does a man have to be tough? Does he have to treat women roughly? Or lovingly? Should every man have a capacity for violence in reserve, just in case he needs it? In the film, Dustin Hoffman’s character David Summer is a mild mannered man; a bookworm, a cerebral man, the furthest thing away from the macho type. But what happens when the mild mannered, peace loving man clashes with the alpha male? Will David have what it takes to stand up to these bullies? And how much will he stand before he actually takes a stand? David Summer is the kind of character (like most of us I guess) who avoids violent confrontations as much as possible. Yet the people he has to deal with are the complete opposite; they  solve everything through violence. In this town, if a man is denied a beer at the local bar for being too drunk, he breaks a couple of glasses until he finally gets it! What’s a peaceful individual like David going to do in such a violent environment? I guess Peckinpah is commenting on how no matter where you go, humanities violent nature will follow you.  Straw Dogs is the kind of film that makes you think about how you would react if you would ever face such a situation. 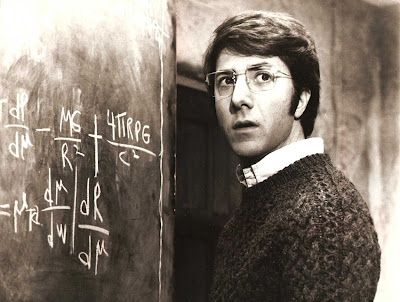 Some (even Peckinpah himself) have called David Summer the villain of the film not because of how violently he reacts, but because of his unwillingness to do something about the situation that presents itself. He fails to take action. The idea behind David being the villain is that everything that happens to him is his fault because he didn’t have the guts to stand up to the rapists when he first had the chance. That his cowardice and naïveté made everything else happen, that he brought it all onto himself, which I agree with. This is a story of a man who learns that things need to be dealt with before they get out of hand. At the same time, I sympathize with David because he is a peaceful guy who’d be happiest educating himself and learning new things, not smashing peoples faces up. During the whole film he is portrayed as a character that is afraid of any type of confrontation. His  reason for moving to was to get away from all the violence and rebellion going on in the ; in fact, it is mentioned that David didn’t even have the guts to form a part of the revolutionary movement, this is a fact that his wife Amy never liked about him.  But hey, can you really blame a guy for wanting to be peaceful? I guess the films big question is what is a peaceful man to do in a violent world? What’s a peaceful man to do when his life, or that of his family is threatened? Some might say that Peckinpah’s answer is “grow some fucking balls and kick the living shit out of anyone who messes with you”, I say it's deal with things before they get out of proportion. Deal with things when they first show their ugly face. David Summer is definitely a character that cannot be described in terms of good or bad, of black and white, there are definitely a lot of grey areas with David Summer. He essentially became that which he hated the most. But then again, this isn’t a black and white world we live in either. What was he supposed to do? Stand back and let those men kill him and rape his wife? Was his violence justified? I kind of lean towards hell yes it was; but you my dear reader can be the judge there. 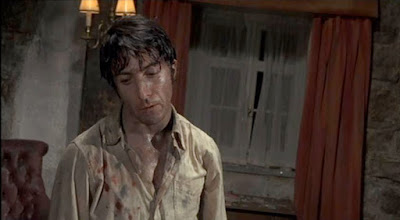 Straw Dogs is a moving film, I can’t tell you how much I got into it. It’s the kind of film that makes you scream “Do It!” to the screen. It is beautifully shot and acted. To me, it's a great revenge film that I wish I had included in my  "Top 16 Revengiest Films Ever Made" post I did a while back; though some argue that this isnt a revenge film, I argue that it is, because he is avenging the violence thats being brought onto his household, he just executes his revenge at a lightning fast pace. I finally had the chance to catch up with this classic, and of course, Im glad I did. Straw Dogs gives us one of Dustin Hoffman's best performances. He portrays the quiet bookworm effectively; a worm that eventually turns and kicks some ass. In the end, Straw Dogs talks about how we are all capable of incredible amounts of violence, if we are pushed far enough. It speaks about the hypocrisy in society. One scene has all the pivotal characters going together to church for a social event and even the rapists are there, sharing with the rest of society in a “sacred place” when in fact they are the lowest of the low. Hypocrisy is further explored when the rapists attempt to kill a rapist, when in fact they are rapists themselves. These characters makes you think these evil men were only out to kill, maim and destroy just for the sake of it, not because they have a reason for it like David Summer did, after all, David was simply protecting his home, cant blame a guy for that. 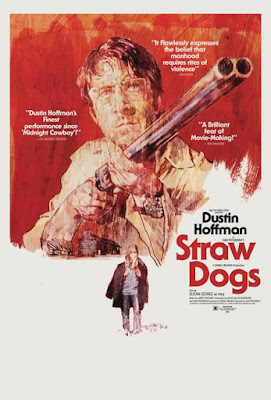