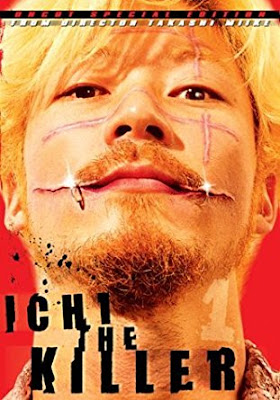 The first time I watched Takashi Miike’s Ichi the Killer, I didn’t know what to make of it. By this I mean that normally, when I watch a film I am constantly analyzing what it’s trying to tell me, the message that it’s trying to bring across. Most of the times I can pick up themes pretty quickly, but sometimes, with some films, nothing happens. Sometimes a film will speak nothing to me. For me, this was the case with Ichi the Killer, in my opinion a vapid film with not much to offer but violence, blood and gore. And that’s okay! Some films are meant to be enjoyed on that level alone. Not every film has to offer the meaning of the universe to you. Some movies, like Ichi the Killer are there simply to titillate and amuse us. Ichi the Killer achieves this with gleeful aplomb. 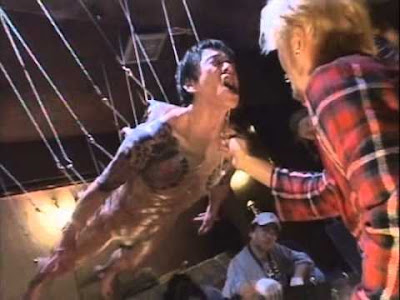 In Ichi the Killer we meet a Yakuza gang whose boss has just gone missing. The gangs second in command, a violence loving man called Kakihara is investigating what happened. You see, he refuses to believe that ‘Boss Anjo’ as he is called, has died. He thinks a rival gang has kidnapped him and is holding him for ransom. So he goes around town, torturing suspects, questioning people in search for his boss. In the meantime, there’s a killer on the loose, but he is not just any killer! This killer kills Yakuza’s for a living, and his name is ‘Ichi’ which is Japanese for #1. He goes around killing Yakuza’s in extremely gruesome ways. It isnt long before Kakihara and his men realize that Ichi is a menace to them, so they go on a hunt for Ichi. 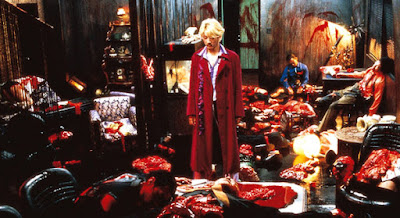 The reason why I was expecting some depth from Ichi the Killer is because my favorite Miike films have some depth to them, for example, Visitor Q (2001) which is one of my favorites. But let’s face it, Miike isn’t exactly known for depth in his movies, he’s better known for their style, their shock value, their violence and their gore. He is also a very diverse filmmaker, making all sorts of films from all sorts of different genres. But I don’t normally finish watching a Miike film and dwell on it’s themes, most of the times, the feeling is just shock. A feeling of “wow, did I just watch that?!” Miikes films always make an impression on you, they always trigger a very visceral sort of reaction. And on this department Ichi the Killer delivers in spades. Kakihara, the henchman who’s looking for his boss is a sadomasochist and the real reason he is looking of Boss Anjo is because Boss Anjo used to inflict him with tremendous amounts of pain, and Kakihara liked it. Kakihara is the kind of guy who has no problems with cutting off his own tongue to prove a point! He has no problems with torturing someone by pouring red hot cooking oil on his back! He pays prostitutes to beat him, because he misses Boss Anjo’s beatings! The guy is in love with pain, but more than that, he is addicted to sensations, always looking for the thrilling, shocking sensation. He wants to meet Ichi because thinks Ichi will give him the ultimate pain, the pain he has been looking for all his life. So, he doesn’t want to find Ichi to kill him, he wants to find Ichi so Ichi can inflict him with an ultimate dose of pain. For me, it was this strange brew of characters that made this film interesting. 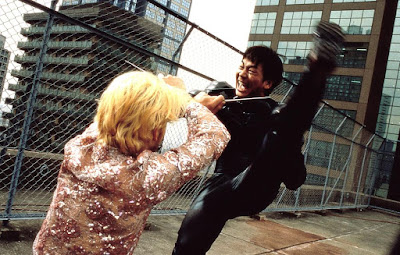 And speaking of Ichi himself, he really is a strange sort of protagonist. He is supposed to be some sort of superhero/crimefighter. He wears a special bodysuit when he goes hunting for bad guys, the suit has a big yellow #1 on its back. But Ichi is anything but a traditional superhero. In my book, he is a really weak main character. He is manipulated and used; he seems to have no real control over his actions. He is fed lies that make him act a certain way. When he is about to murder bad guys, he cries uncontrollably because he doesn’t want to kill anyone, yet he does it because he’s been conditioned to do so. When he is about to kill a bad guy, he gets an erection. He sees a raping going on, he doesn’t try to stop it, he feels aroused and wants to participate. I mean, this guy is all sorts of weird. Yet when it comes down to killing a couple of Yakuza’s he does it almost effortlessly with these blades that come out of the heels of his shoes. With this film, Miike switches everything around, the hero is a wimp, while the villain is the intelligent one. Hell, there is no doubt that Kakihara is the main character in this movie even though the film is named Ichi the Killer, it’s Kakihara’s face that’s on the films cover, not Ichi’s. Actually, Kakihara is on the film more than Ichi is. 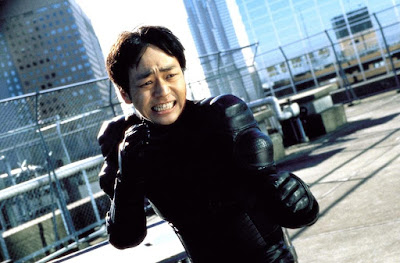 Ichi, a strange sort of 'hero'

This is a film filled with very troubled individuals. Both protagonists (Ichi and Kakihara) have sexual frustrations and dysfunctions. I mean, Ichi gets aroused when he’s going to kill someone and Kakihara gets aroused when he is inflicted with pain. These freaky sexual antics are something to be expected from a Takashi Miike film, a filmmaker that like Cronenberg isn’t shy about exploring human sexuality. I mean, in Gozu (2003) there is a character who can only get an erection by inserting spoons up his ass! I kid you not! So anyways, I hope this review has helped in giving you an idea of what to expect from Ichi the Killer. There’s freaky sexuality and there are copious amounts of violence and gore. A word on the gore: most of it comes off as cartoonish and over the top. Characters get horrendous amounts of pain inflicted upon them and don’t pass out or die, I mean, in one scene Ichi slices a guy in half like a freaking watermelon. Kakihara slices of his own tongue and keeps on walking as if nothing had happened to him. In fact, he simply sews his tongue shut and keeps going about his business. Final words: Ichi the Killer is your typical violence filled gangster movie with not much to say, but lots of things to freak you out. 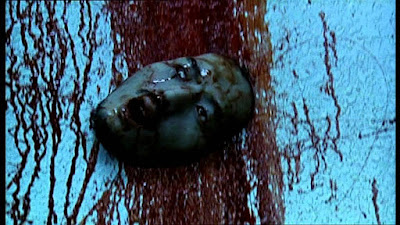 I think this is a perfect movie

Yeah, it was fun.

One of the best Miike films. Any Yakuza film won't have much depth, you just have to focus on the dysfunction by the characters and wait to see where it leads you. For every 13 Assassins Miike makes, he's gotta make a Zebraman.

Yeah, thats how I saw this one Jaded Viewer, in any case, Ichi the Killer takes us to some very amusing places! I will be reviewing 13 Assassins next week, cant wait to actually see it, sounds like it will be awesome.

Cant blame Miike for making films like Zebraman or The Great Yokai War, making childrens films that are profitable allow him to make his more experimental ones.

Ichi the Killer is a film with no depth?
I beg to differ.
This is the thing that upsets me most.
People fail to see in between the lines, past the blood bath and the jet black humor.

Please, I urge you to watch this film again and perhaps re-think your thoughts on the movie.

There is incredible depth to the film if you look past fireworks.

Sure anonymous, I'll give it a rewatch. I guess that's how I felt at the time of writing this review, this is not to say that Miike doesn't make profound films, I've seen a lot of his most profound ones, but Ichi, for me wasn't. Still, I enjoyed the film a lot. I'll give it another look see and perhaps give it a reassessment. Thanks for reading!