The Film Connoisseur Visits the Set of Fast and the Furious Five! 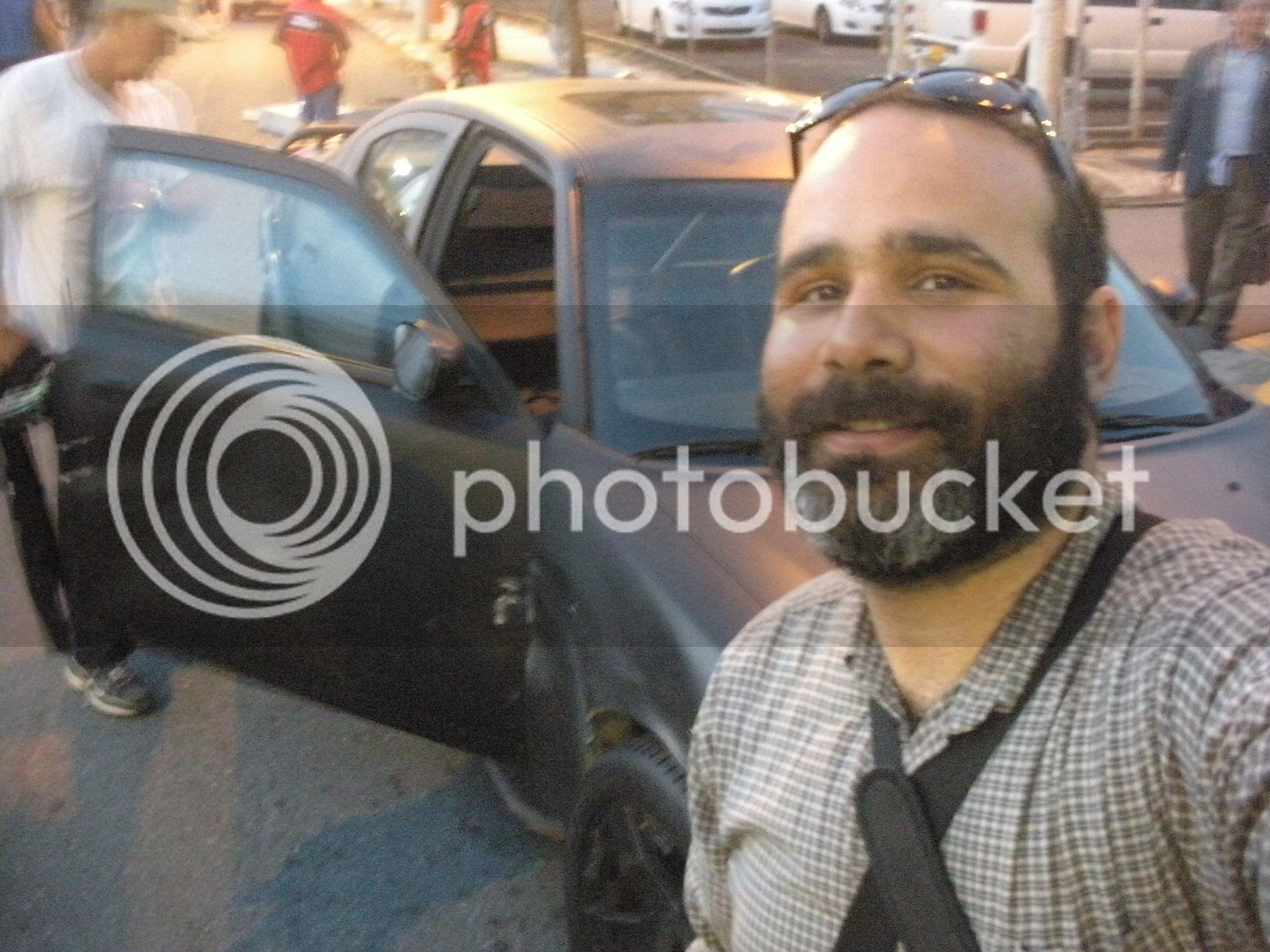 In case you wondered what The Film Connoisseur really looks like, thats me right there, behind me one of many Dodge Chargers that were used during the filming of Fast Five!

I've never been a huge fan of the Fast and the Furious franchise. To me they are a bunch of dumb and brainless action films. I never really saw the first one, fell asleep watching the second one, watched the third one in the theaters because my dad wanted to see it (and actually enjoyed it) and finally, I did see the fourth entry in the series, because I wanted to see how it would connected to this fifth one that was being filmed in my country. I was surprised to find myself enjoying the fourth one. The stunts were fun as hell, there is one spectacular one that opens up the movie, where they are trying to steal gasoline from a fast moving gasoline truck; the results were pretty explosive to say the least.  Maybe I've been underestimating these movies and ought to give them a chance? The two I have seen have been fun times, maybe one day, I'll check all the other ones out. At the very least the films have well orchestrated action sequences; you gotta give them that! 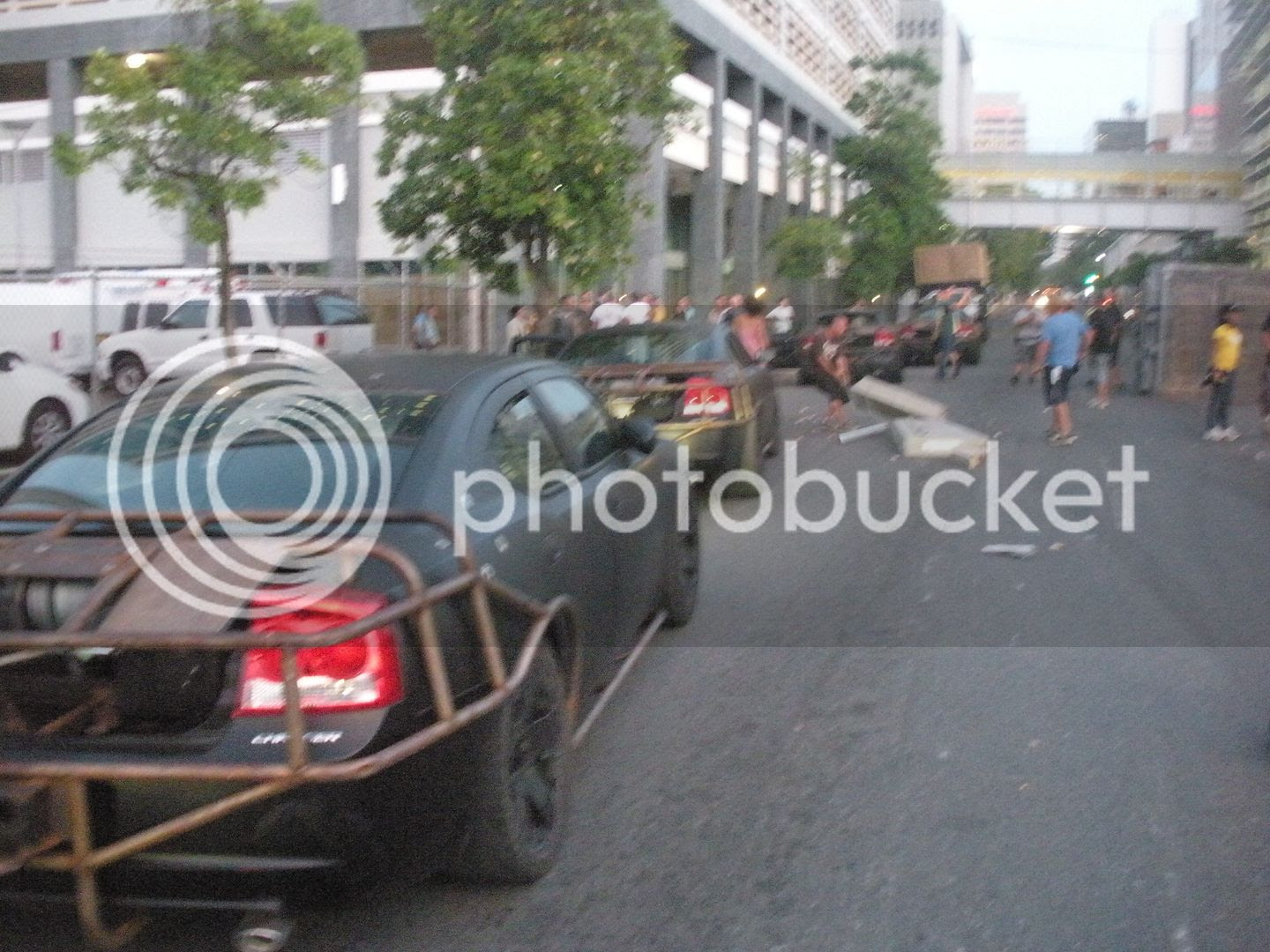 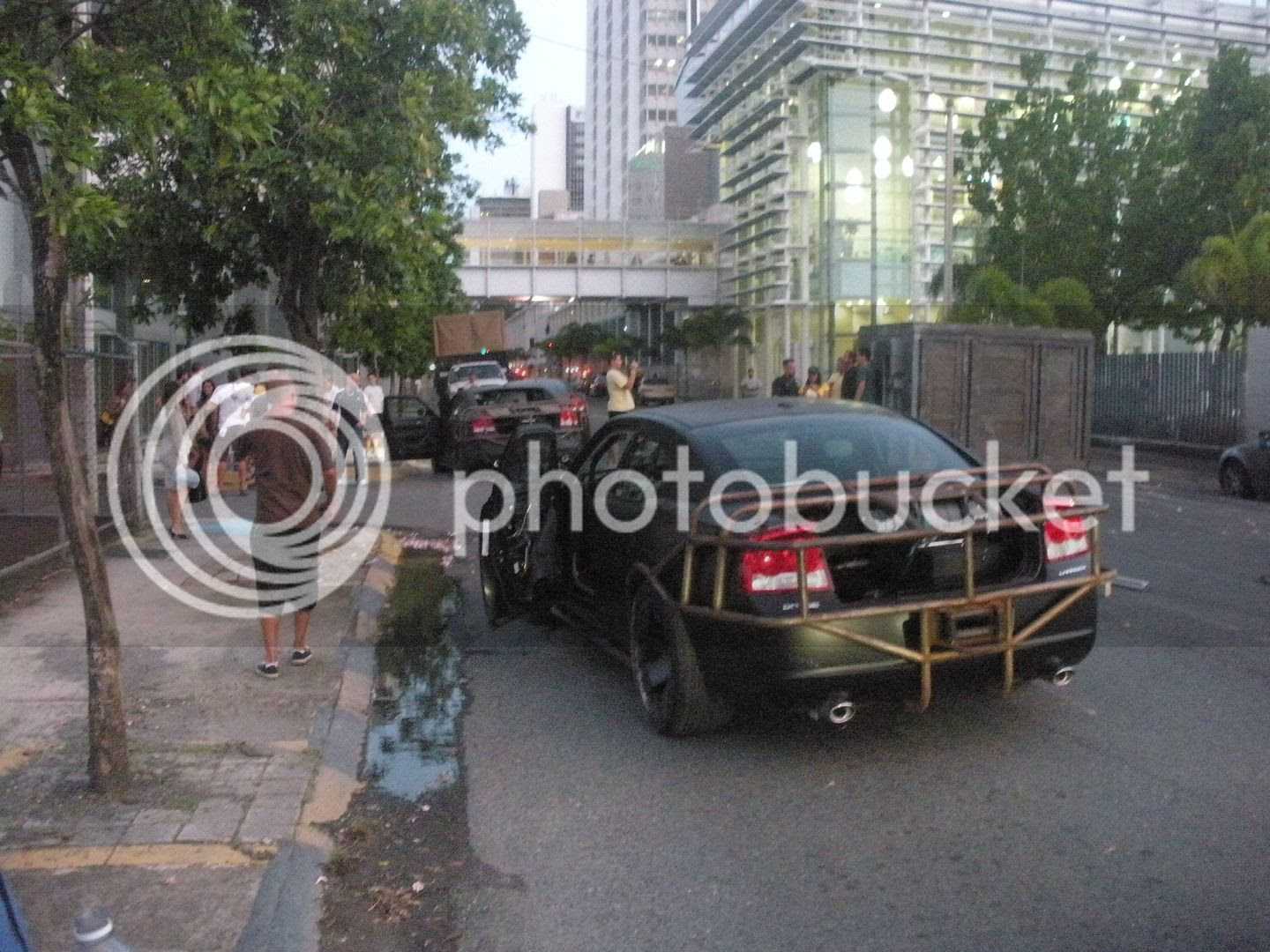 This was going down right in front of my job, of course I had to be there!

But here’s something cool that happened to me a couple of months ago: the fifth Fast and the Furious film (Fast Five) was being shot right here in Puerto Rico, where I live! So this meant that Vin Diesel, The Rock, Elsa Pataki and Paul Walker would all be visiting the island shooting all sorts of crazy action scenes. I never got to see any of the big action stars because they only come out of their hotel rooms to film the close ups, but I did get to see a lot of the second unit stuff that was being filmed, and that was quite an experience. Lots of action, lots of destruction. And destroy things they did! The production of the film shut down entire streets! They even closed down a whole freaking bridge for a couple of days in a row. These guys had kajillions to spend and they meant to spend them. Coolest thing about the whole thing? They were going to film some scenes right smack in front of the building where I worked at! You know what that meant, I was gonna document as much of the experience as I could! These fast cars drove by at high speeds, they crashed and destroyed everything on that street! The skid marks the cars left behind are still on the street, and they shot this whole thing about a month ago! How much money did this production have? Well, they closed down a gas station for three whole days that’s how much money they had. 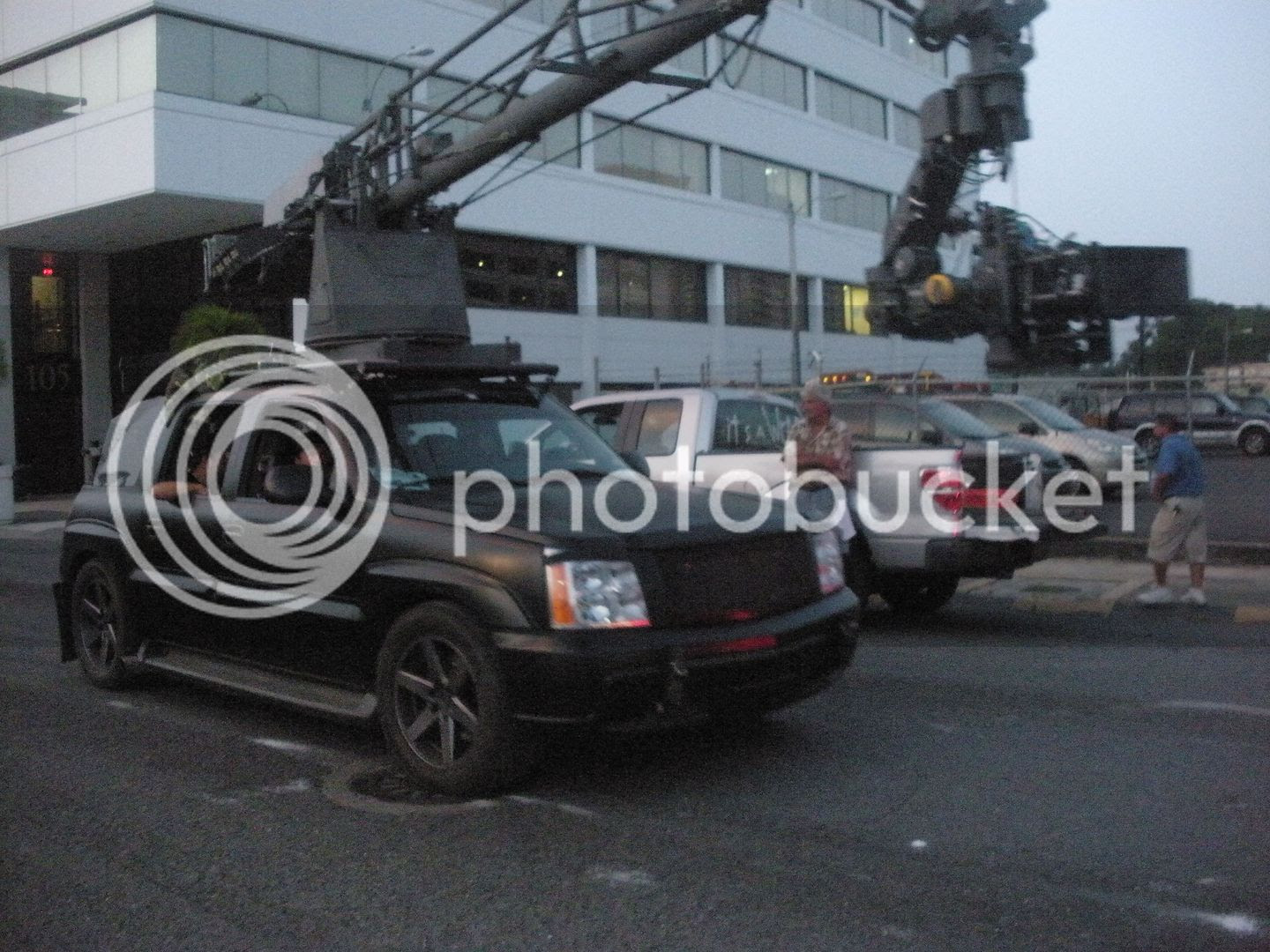 This van had a camara attached to it at the top, the whole crew drove around it shooting stuff! Lucky bastards!

Though I don’t really love these films, it was exciting to see a big multi million dollar production unfold right in front of my eyes. I mean, I got to see the cameras, the extras, the lights and the sets! They even built a whole bank from the ground up, simply to destroy the whole damn thing in a couple of seconds of course. Luckily, I was there to witness the destruction. 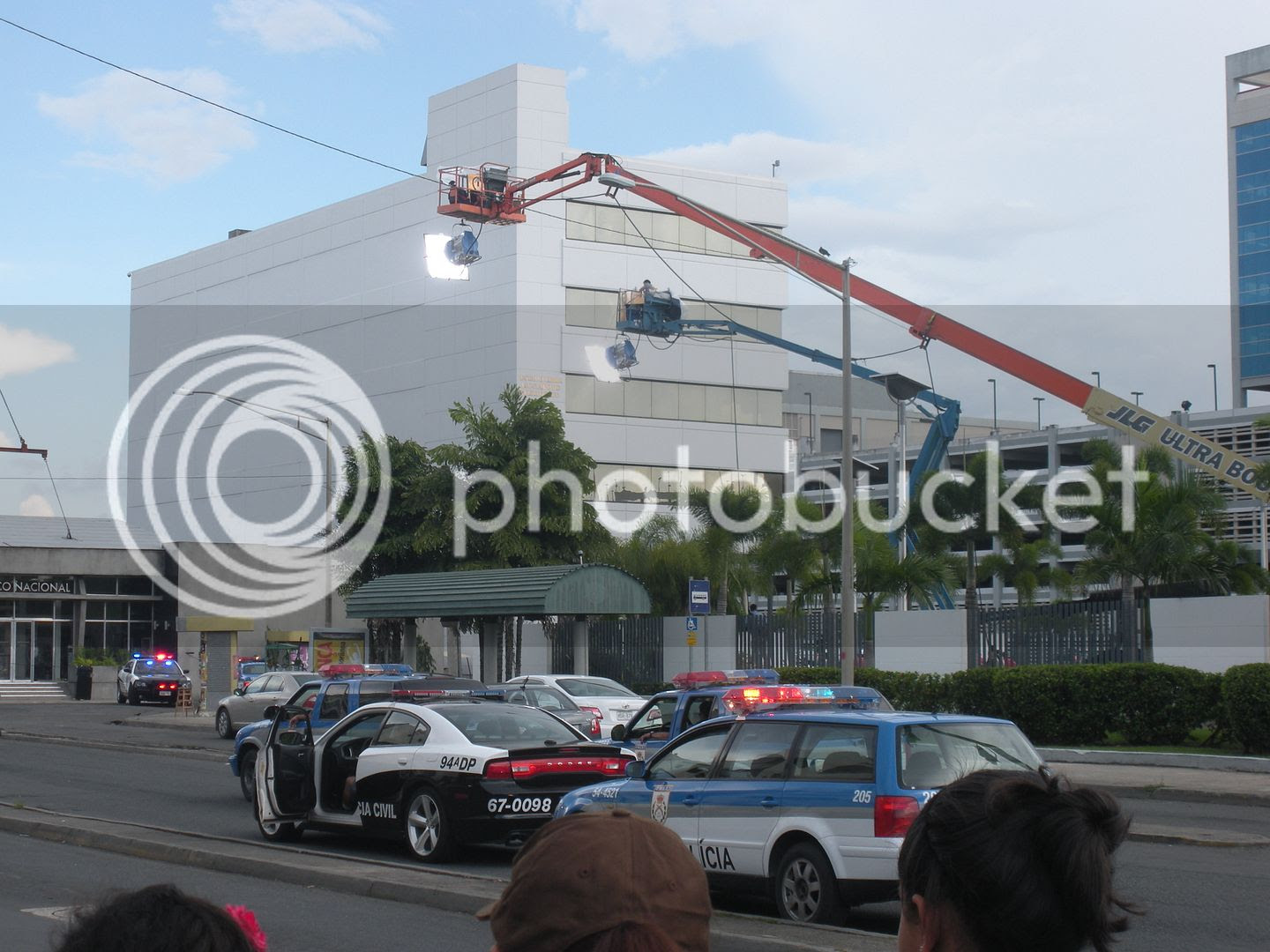 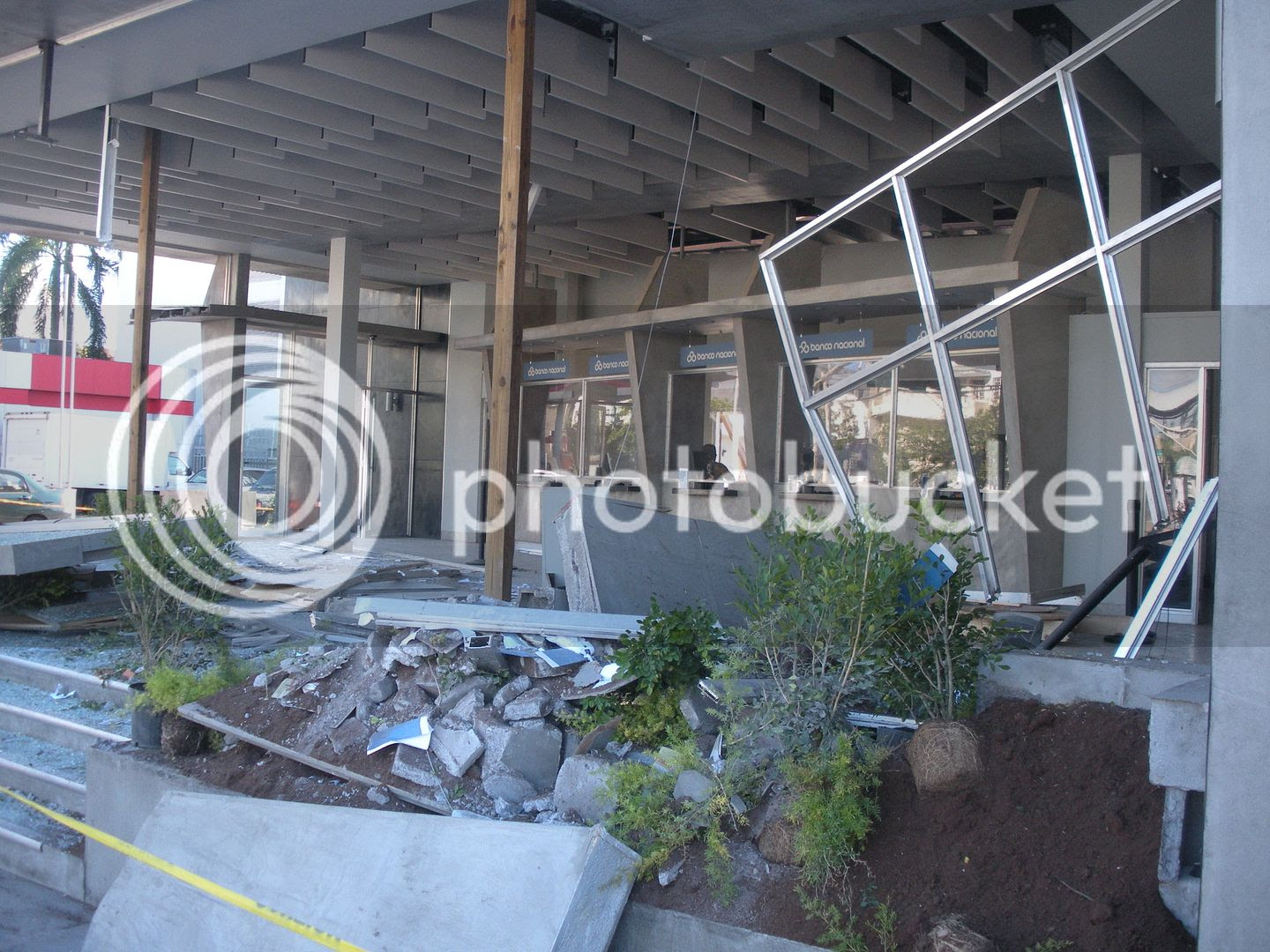 Here we can see them shooting the destruction of the "bank" in the first pic above, and the bank set after it was destroyed by the vault. Notice the fake police cars.

They filmed this whole sequence where these two cars are dragging a bank vault across the street. As they dragged the vault, Brazilian cops where hot on their tail. You see, the movie is supposed to take place on Brazil, at least part of it. So they changed all the billboards and signs to look like they were from Brazil. The vault went around crashing into cars and light posts and destroying buildings as it was being dragged. Man, these guys destroyed cars like they were toy cars, they didn’t care how many millions they spent! It was crazy. I asked them at one point (cause I got to walk around freely through the set after filming wrapped) if they planned on destroying all these cars. And they told me that they didn’t plan to destroy as many as they did. Funniest thing? The vault ended up destroying one of the most expensive cars on the street! 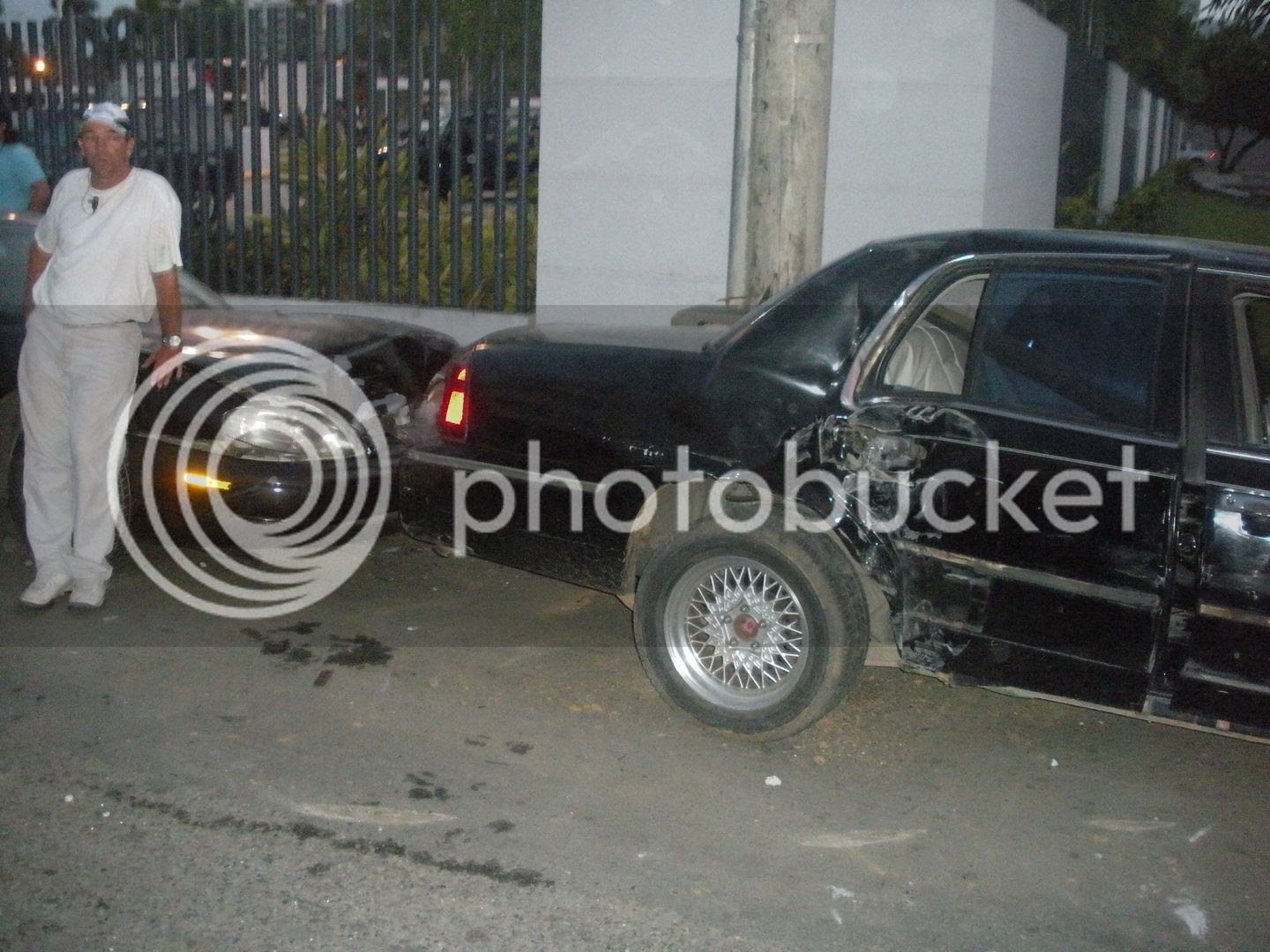 One of the many cars the Vault smashed up!

Another action scene involved the vault destroying a bus station and a light post. The light post fell down and hit one of the police cars that was following the good guys. So they smashed this light post over and over again on this police car they had rigged to look all smashed up. Fun times in deed! 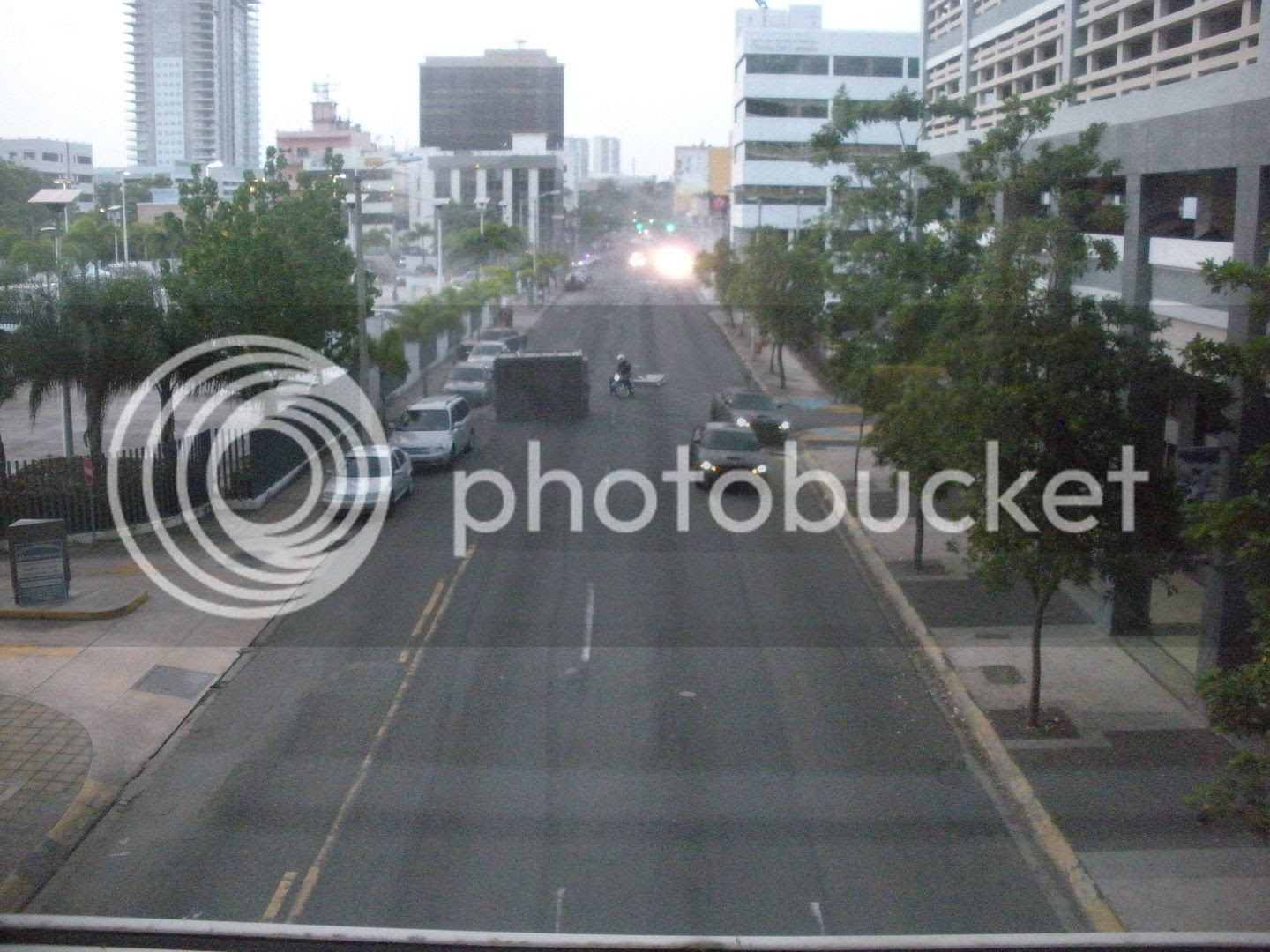 The two cars dragged the vault down this street as it was banging cars left and right. It was a big action sequence!

I got to personally talk with Paul Walkers stunt double, guess what? He told me he didn’t have to work for the rest of the year because this movie paid him so much! Ha! Lucky dude. And I said hi to one of the second unit directors, he told me his name was 'Spyro'. At one point I had to get out of the way because they were going to film some scenes of a car burning rubber, and I stood next to some producers. I could hear them talking all sorts of Hollywood producer things like “were gonna be filming this scenario and that scenario and then we wrap” and I swear, I was standing next to this woman who I thought might be   Michelle Rodriguez…but she was wearing this huge hat and these huge glasses. That’s the kind of thing actors do to hide their identities. The mysterious woman had a birthmark on her face and I didn't remember Michelle Rodriguez having one. Plus, Rodriguez's character doesn't appear on this fifth installment, so I let it slide. Later, when I finally got to see the film, I realized it was Elsa Pataki whom I had been standing next to! That birthmark  gave her away!

Coolest experience was when they wrapped, the whole crew gathered and screamed and hugged and laughed. It was like one huge filmmaking family! What a moment that was! Minutes after they yelled "thats a wrap!" Notice all the debri on the road!

So anyways, hoped you guys liked the pictures of my experience. Puerto Rico has suddenly become a haven for filmmakers, because of the tax deductions, studios save mucho dinero by filming here. They just got through filming some scenes for Pirates of the Caribbean 4, it was a love scene between Johnny Depp and Penelope Cruz and they filmed it in 3d! They also recently shot The Rum Diaries in its entirety here. Im still waiting to see that one though, I guess they are waiting to release that one around Oscar time. And finally, I hear that the next Die Hard movie will be filmed here, so I’ll keep you guys posted on that. Maybe I’ll get to take some pictures of that one as well!

Didja get a chance to see any of THE RUM DIARY being filmed? I'm dying to see that one!

Actually I did! I almost ended up being an extra on that one but work got in the way. Sadly. But I did get to see them shooting this scene where Johnny Depp is driving down a road in Old San Juan, with a windshield of his car broken and screaming.

The movie takes place during the 50's, so they filled the whole street with cars from the 1950's and Im walking by and Im like..."wait a second!" I suddenly realized I was in a movie set! I didnt even know they were shooting that day.

Recently, they also shot some scenes from The Men Who Stare at Goats over here.

And they are also going to be filming Treasure Island...Im looking forward to maybe being a pirate on that one.

Pretty awesome! Color me jealous, though my old lady is a bigger Fast And The Furious fan than I. She would have flipped!

That's very cool! I'm insanely jealous. I've read THE RUM DIARY book and am amped for that one. I've also seen THE MEN WHO STARE AT GOATS. Quite enjoyed it. I had no idea your neck o' the woods was such a hotbed for filming!

It was an extremely fun and interesting experience, I mean, it was great to see the director shouting from his megaphone "let's clear the set! Action!"
The chase sequence with the good guys stealing the vault, it looks like its going to be a huge sequence, might be one of those big action sequences that the movie opens up with, like the gasoline rig action sequence in the fourth one.

I only got to see the stunt doubles, never got a peep of the big stars, Paul Walkers stunt double looked a whole lot like Paul Walker, but Vin Diesels didnt look one bit like him, he was this tall dude who wore a fake bald cap over his head, Im guessing so they could match it with Vin Diesels bald head.

They also shot another action film here about a year ago called THE LOOSERS. If you see that one, you'll notice they shot some scenes in the exact same streets as they did for FAST FIVE. I guess producers like how this area is filled with a lot of banks.

@J.D.: Its all about the tax deductions. Here they can film for a lot less then say New York City or any other major city in the world.

The climate is tropical, which can be ideal for filming. But sometimes it can be a hassle, the FAST FIVE crew had to shut down a couple of days because when they were filming we had these storms every other day. But they managed to film around it.

A lot of films have been made here! Roger Corman filmed a couple of his movies here, hell, even Woody Allen shot BANANAS here.

I read THE RUM DIARY too, I loved that book because I love HUNTER S. THOMPSON, but also because it takes place almost entirely in Puerto Rico. So the streets and places he mentions, I know exactly where they are. Every time I walk down McLeary street here in Puerto Rico, I know somewhere around there, Hunter spent his days there having his drunken adventures.

Hunter actually worked in a real newspaper here in Puerto Rico. It was called The San Juan Star. It was an english language newspaper that really existed here. They even shot in the exact same location where those offices were located here during the 50's.

I heard they were selling those banged up Dodge Charges really cheap after the shoot. Im pretty sure somebody bought one of those.